The documentary, which will be screened during SIFF, carries unfortunate similarities to his 1999 book about the Seattle SuperSonics. 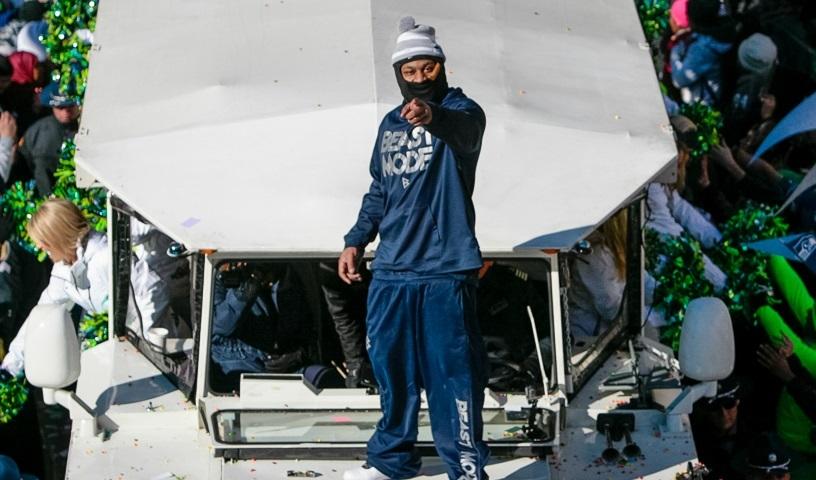 One of comedian Dave Chapelle’s most memorable skits on Chappelle’s Show was a two-part faux Frontline story about Clayton Bigsby, a white supremacist who is Black. The running joke is that Bigsby is blind and, having been raised as such, thinks he is white. Early in Part 2, he happens upon a car full of young white men, heads bobbing to the hip-hop banging on their stereo.

“Hey! Why don’t you jungle bunnies turn that music down!” Bigsby screams, assuming their race because of the music. He then spits the N-word at them several times before the pickup truck carrying him speeds away.

Stunned, the driver asks his buddy, incredulously, “Did he just call us (N-words)?”

“Awesome!” he continues, brightening and initiating a congratulatory soul handshake.

This was my take on David Shields, a white author, after reading his book, Black Planet: Facing Race During an NBA Season (Crown, 1999). Already a professor of English at the University of Washington when he wrote the quasi-non-fictional work, Shields came off as a white guy who, if he couldn’t hang with Black athletes, desperately wanted to at least be acknowledged as having understood them.

“For white guys, for millions of white guys including myself who are not cool!!, watching basketball is one last chance if not to be cool at least to get in contact with cool,” wrote Shields.

For an enlightened-white-guy wannabe, being called an N-word by a Black person would be the ultimate acknowledgement of his wokeness. Not getting close to such an acknowledgement from or even physically close to the Black athletes — Sonics star Gary Payton, in particular — about whom he fetishizes, did not stop Shields from obsessing, speculating or writing about them. Maybe it should have.

Maybe it would have stopped Shields from coming back two decades later with a sports film, Lynch: A History, which will be screened at the Seattle International Film Festival on Monday and Wednesday. It’s not as if the video montage, which Shields wrote, directed and produced, lacks entertainment value. Its subject, after all, is Marshawn Lynch, the former Seahawks running back who was one of the most compelling — if not the most compelling — characters to ply his trade as a professional athlete in Seattle.

Shields did not have direct, meaningful access to his muse — Payton — or Payton’s team while he wrote about the 1993-94 season of the Seattle SuperSonics in Black Planet. Shields reprises his role as outsider in Lynch, as he does not have access to this subject, either. But neither instance stopped him from at least implying that he knows what is in their heads.

Relying almost exclusively on archival footage, Shields not only jump cuts through Lynch’s football career, he liberally slices and splices references and commentary about race and civil rights. It’s not cultural appropriation, per se, but it’s certainly something you might call appropriation of cultural narrative. It builds on the time-honored colonialist tradition of the white man (or, sometimes, woman) feeling uniquely qualified (i.e., the only one intelligent enough) to attach meaning to nonwhite existence.

Bill Cosby is shown in Lynch saying, “For the most part, the Black portrait has been drawn by the white writer and the white producer and the white director for the white audience.” But Shields seems tone deaf to a message that permeates his own work.

It could be argued that Shields might not be able to get Black Planet published today, in a time when nonwhites are reclaiming our stories, and authenticity is the ultimate cultural endgame. If he were as woke as he wants to be, Shields would step aside and either make space, or help provide a platform, for narratives that neither he nor his ancestors have lived.

The arrogance of making pronouncements from such distance is what galls me. I can speak more authoritatively about Black Planet because I covered the 1993-94 season for The Seattle Times. Unlike Shields, I always had close, consistent access to the players, especially Payton. In fact, one of my media rivals once complained to Bernie Bickerstaff, the former Sonics coach, that most of his players spoke only to me.

“You need to make them talk to the rest of us,” the rival implored Bickerstaff, who laughed at such a prospect.

The point is, I never had to speculate about a player’s thoughts or motivation because I usually knew them. Shields guessed, unabashedly and just about always incorrectly, apparently without attempting workarounds, such as speaking to peripheral sources, including coaches or friends or family. And then, stepping far beyond an appreciation, which might have been acceptable, he put those vapid and often-insulting observations into a book.

Though it hit with an awkwardly quiet thud in otherwise Sonics-crazy Seattle (in its review, The Times called it “annoying”), Black Planet was hailed by some as a work of genius. That praise was sung mostly by liberal white men, who, like Shields, liked the idea of examining race, especially in a sports context, but lacked the proximity or capacity to judge the accuracy or even appropriateness of the attempt. In the crevices of fragile, mainstream society, there is an enthusiastic embrace of contemplating nonwhiteness as a gateway to absolution for white guilt. It is the liberal counterpoint to the supremacist assumption that any mention of race is bad (i.e., race=racism).

Stanley Crouch, the iconic and iconoclastic Black cultural critic, was having none of that. Black Planet provoked him to eviscerate Shields in an essay that provides the title of Crouch’s 2014 collection, The Artificial White Man: Essays on Authenticity.

“This man evidently never read or spoke to Negroes with brains who would challenge his narrow description of Black people — all meat, all fantasy, all rhythm, all bad behavior at their most admirable,” Crouch wrote of Shields, the “artificial white man” in question.

At least in 20 years David Shields has grown up a little. Sticking to topics he knows much better, he has written and sold a lot of other books since Black Planet, including the provocative and well-received Nobody Hates Trump More Than Trump: An Intervention. But that doesn’t mean Shields has progressed beyond privileged fan-boy when he dons the trappings of socio-ethnographic sports commentator. He tried to sprinkle some street cred onto the Lynch project by snaring Danny Glover as an executive producer. That makes Shields woke-adjacent at best, not enough to entitle yet another white man to a (second) opportunity to explain people of color to the rest of the world.