Parker and Greta Mayer helped girls and the queer community find their place in STEM in rural Washington through robotics. Are boys next? 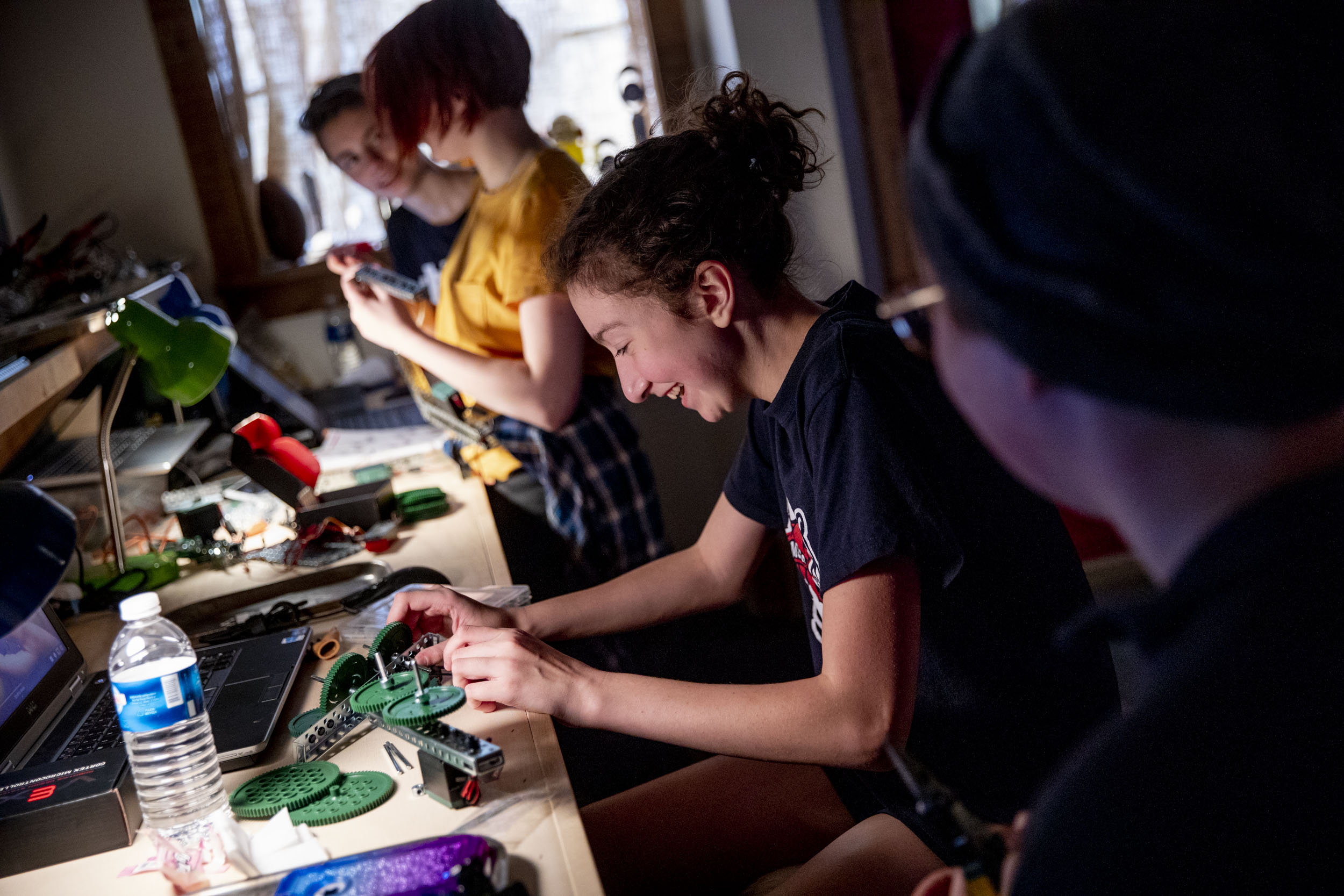 Eighth grader Maddie Bodenman laughs as she works on her robot during a Nerdy Girls meetup in Ellensburg on May 17, 2019. Nerdy Girls is an underground robot society started by sisters Parker and Greta Mayer in January 2017. (All photos by Dorothy Edwards/Crosscut)

When Parker Mayer was in the ninth grade, she taught herself how to code a robot.

When she joined the robotics team at Thorp High School in 2014, she had hoped to work with computers and programming. Instead, she had been assigned to design the team's T-shirts. But the team’s robot programmers — all boys — all had recently quit, and it was the night before competition. This was her opportunity to get off the sidelines.

Parker and her sister, Greta, then a seventh grader, put YouTube tutorials on blast in the school’s math classroom and scrambled to learn enough C++ to get their team’s robot to run in time for their competition the next day. To their amazement, it worked: commanded by a hand controller, the robot successfully negotiated several obstacles, including driving up a ramp.

“We were feeling pretty awesome,” Parker says. “It’s a totally incredible feeling, knowing that the robot in that competition was running our code.”

Their robot, which they called Carl, won their event in competition. Parker and Greta were hooked.

As they continued competing, they both say they noticed very few other girls coding and building the robots. Like Parker, most of the girls they saw were asked to design T-shirts or run social media.

Parker was told by competition mentors at the time — mostly teachers and tech workers — that a difference in biological hardwiring was to blame for the lack of girls in robot building and programming. Parker came to a different conclusion: She says at that moment, she recognized how mainstream girl culture around her valued young girls only if they are pretty and well-liked. It was a message she struggled with since middle school.

“There is no escaping and you have to play the game to survive,” she says. “That culture leaves you feeling powerless.”

But if coding robots taught them anything, it was how to look at seemingly intractable problems with fresh eyes, how to modify and scrap and rebuild until they found the solution they needed to move forward. For Parker and Greta, the solution was Nerdy Girls, an underground robot society they started in January 2017.

“We want girls to get angry at that culture and shed the value system that doesn’t serve them and instead go on a really difficult journey where they work their asses off to get technical skills that actually make them feel powerful and earn an ultimate sense of self-respect knowing that they can teach themselves anything and that they can handle any situation and they can build anything with their hands,” Parker says.

By learning about all things robots, Parker and Greta (now a senior and a sophomore), think they’ve found an avenue for young women to gain empowerment and find their place in the tech world. And they aren’t alone.

FIRST, the nonprofit that since 1989 has hosted the national robotics competitions that Nerdy Girls competes in, has seen a significant increase in impact on girls in robotics in just the past three years. A FIRST longitudinal study from 2018 found that girls who participate in robotics programs show significant gains in STEM identity, knowledge, interest and involvement in STEM activities and careers.

Faith Cooper is a high-school junior who joined as an original Nerdy Girls member when she was a freshman. As a result of her experiences, she plans on studying aerospace engineering in college. She hasn’t decided which one yet: Right now, she says she’s focused on trying to learn a new programming language for a Nerdy Girls robot.

“This has been a big part of my life for two years now,” Faith says. “It has changed my idea of technology and it has made me want to go into technology.”

On Fridays during the school year, Nerdy Girls meetups happen inside a bright red barn set against a backdrop of rolling hills right across the Yakima River in Ellensburg. The Mayer sisters’ grandmother owns the barn. Inside, techno music plays from an iPhone speaker and colored disco lights dance along the ceiling. There are 18 workstations, each with a different colored stool topped in faux fur. On a workbench, a metal plate with a hand-painted “NG” holds spare robot parts. In the middle of the room are challenge courses where budding programmers test their robots against a miniature maze of ramps, walls, sharp corners and other obstacles.

Around 5:30 p.m., team members stagger into the barn, stopping at the snack table to giggle over Krispy Kreme doughnuts before grabbing laptops and heading to their workstations, where they will hunch over robot parts, faces lit up by screens, for the next two hours.

Parker is constantly moving. She stops by workstations to offer advice on puzzling builds and pauses to cheer on girls as they maneuver robots through one of the three challenge courses in the middle of the room.

“My favorite part is the moment when they switch from freaking out that their robot isn’t working and everything is broken to ‘nope — I’m going to do whatever it takes to make it work,’” Parker says. “Then they come back, and they attack it over and over again and when the job is done, you can just see the way they see themselves.”

Together, the Mayer sisters developed a Nerdy Girls curriculum of six levels of ascending difficulty: Novice, Scout, Warrior, Commander, Emperor and finally Overlord. Members must complete between three and seven course challenges to move to the next level. A poster board hanging on the wall hosts name placards for each girl to track everyone’s progress. Each project the girls work on has an accompanying YouTube tutorial they share with over 300 subscribers.

At Warrior level, participants can join one of two Nerdy Girls competitive robotics teams to compete in FIRST Tech Challenges for grades 7 to 12: The Plastic Avocado Cult or the Flaming Hippogriffs. The Mayers’ level-up system has already gotten results: In only its second season, The Flaming Avocados' robot Destroyer of Dreams placed first and the Flaming Hipogriffs’ robot Witherwings (an alias of Harry Potter's hippogriff Buckbeak) took second in their 14-team division in December, qualifying once again for the state championship in March.

When Nerdy Girls’ single team went to state in its first season in 2018 to compete against 34 other teams, team members quickly noticed a difference between teams based on location: The west-side teams they faced had sponsors like Microsoft or Boeing, and their robots featured expensive custom parts – parts that Nerdy Girls don’t have access to. Up to this point, Nerdy Girls has been funded through Generosity, a crowdfunding site, and a grant from the Suncadia Fund for Community Enhancement. $12,000 in startup costs paid for laptops and basic robot kits for all of the members. It costs $5,000 a year just to keep Nerdy Girls running, and another $5,000 for competition.

Parker discovered that Nerdy Girls was challenging yet another layer of inequality in tech with far-reaching consequences: the urban-rural divide. Nerdy Girls didn’t place very high at state (their robot died halfway through the competition), and she believes that without a wider network of support, it would be difficult to go further.

Even if they aren’t winning state, Nerdy Girls has caught the attention of people like FIRST Washington president Erin McCallum, who launched the Girls First Initiative to challenge each FIRST Washington team to double the number of girl recruits.

“We are after the girls who believe they are not good at this, that they aren’t good at math or science,” McCallum said. “We are trying to break those barriers to encourage the girls that they can do this, and they are just as good as their male counterparts.”

FIRST Washington has seen results. When the initiative launched in fall 2014, 28% of the competitors were girls; that number reached 42% by the fall of 2018.

Within five or six years, McCallum believes the Washington STEM job market could start to experience a paradigm shift in employment — with respect to both gender balance and talent originating in rural communities like Ellensburg. Through robotics, McCallum says she is seeing a range of students begin to imagine themselves in STEM jobs for the first time in their lives.

“I think that if we could get Nerdy Girls in all of our communities, the gender imbalance in the STEM profession – not just in Western Washington, but all over the state — would be nonexistent,” she said.

As Nerdy Girls grows, it’s also expanding its definition of inclusion in robotics: The barn has also become a safe space for non-binary students and other members of Ellensburg’s LGBTQIA community. In the workspace, many members feel comfortable being open about their sexual orientation and gender identity.

Mia Pollock is one of them. Mia identifies as non-binary and asexual, and the high school junior says Nerdy Girls is the only place they are referred to by their preferred pronoun. Mia says they are regularly misgendered, including by their parents.

With Nerdy Girls reach growing, so is Parker and Greta’s vision for the future. They hope to open teen-led Nerdy Girls chapters in other communities and eventually outside the U.S., including developing countries. But first, the sisters are restructuring the curriculum to implement cheaper, off-the-shelf gadget-based robot systems with the goal of making the forthcoming Nerdy Girls chapters more accessible. They hope to finalize it by the end of the year.

To sustain funding, this summer Parker and Greta are launching BotQuest, a beta summer camp for all genders in grades 5 to 8.

Parker and Greta’s mom, Jill Mayer, says that the decision to make BotQuest open to all genders was a struggle. It is important for them to protect Nerdy Girls meetups as a space for girls, but because there is already so little access to robotics in rural places like Ellensburg, the camp is a way to branch out and include everyone.

“We want the boys to build robots, too,” Jill said. “It’s so important — it’s the future.”

Beyond BotQuest, Parker plans to study computer science at Central Washington University in Ellensburg part-time in the fall — but to her, college is just a tool for her to refine and expand what she and her sister began.

“I can't imagine ever walking away from Nerdy Girls — I think this is my life's work,” Parker said. “I'm only going to college to push my own skills forward, and so that I can turn around and hack the system for girls coming behind me.”