What caused 26 power poles to collapse in South Seattle?

An investigator from Georgia has been hired to examine rot, weight and other possible factors. 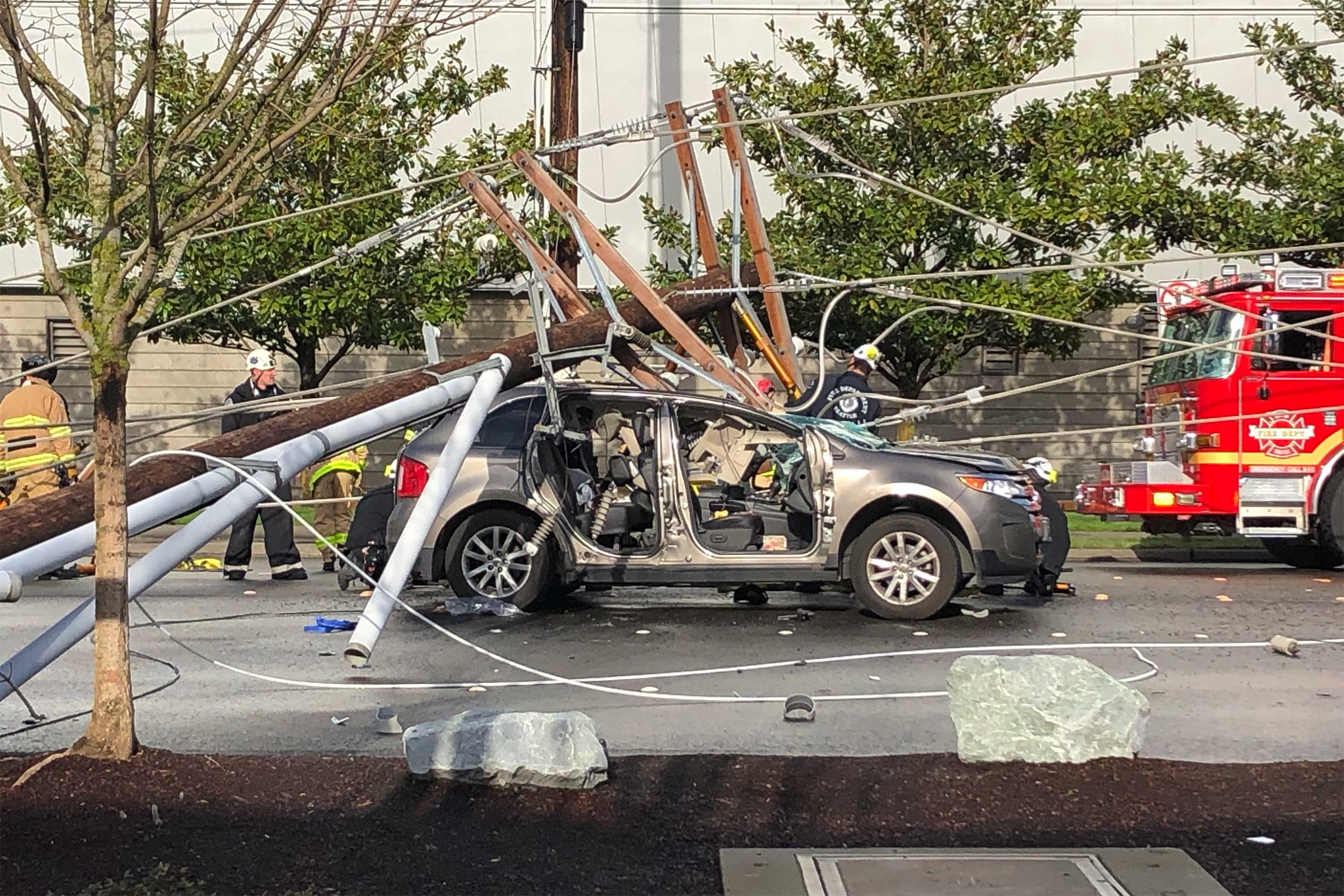 Linda and Tom Cook were trapped in their SUV for more than an hour when a utility pole fell on their vehicle along East Marginal Way in Seattle on April 5, 2019. They suffered non-life threatening injuries. (Photo © Nicholas Draney, Tukwila Police)

The Seattle City Attorney’s office has hired a Georgia-based utility-infrastructure consultant, Nelson Bingel, to conduct an inquiry into why 26 power poles collapsed near Boeing Field last April, Bingel confirmed to Crosscut in an interview last Friday.

The dramatic incident, which occurred on East Marginal Way, sent two motorists to the hospital. Its cause has been the subject of much speculation.

According to inspection notes provided to Crosscut through a public records request, 10 of the 26 wooden poles that collapsed were identified in 2016 as having varying levels of rot, although it's unclear what, if any, role that played in their collapse. None of the poles had been flagged for immediate replacement.

Bingel’s expertise is, in part, in the integrity of utility poles and why they may fail, including because of wood decay and steel deterioration, according to his website.

The City Attorney’s Office, anticipating lawsuits, took over the investigation from Seattle City Light in the aftermath of the collapse. As a result, the office has declined to name the investigator and declined to comment for this story.

But in a brief phone interview Friday, Bingel of Nelson Research LLC confirmed he and a small team were conducting the investigation. He said they are still in the early stages and recently set up software to model the collapse. Bingel declined to offer any early explanations for the poles’ failure, and said he expected they would need several more months to make their findings public.

The poles crashed across East Marginal Way on April 5 in a head-scratching and terrifying chain reaction, one pole dragging down the next, the next after that and so on. One pole slammed into the windshield of Linda and Tom Cook's car, landing between the two of them and improbably sparing both from serious injury or death. The two were trapped in their vehicle for more than an hour as crews worked to free them.

None of the poles had been tagged for immediate replacement when last inspected in 2016, according to the records provided to Crosscut. Eight poles had been labeled as “Priority 2,” meaning they should be replaced in due time.

All eight of those Priority 2 poles, plus two labeled the more stable Priority 4, were identified as having differing forms of rot.

Seven of the poles showed signs of “heart rot” — meaning the core of the pole had deteriorated. Crews identify this form of decay by first tapping the poles, according to City Light spokesperson Julie Moore. If they sound hollow, crews generally follow up by boring a hole into the pole to examine its core.

Two other poles were identified as having an “external pocket,” meaning an area on the outside had rotted. And one pole had “pocket rot,” meaning small areas on the inside had deteriorated.

The seriousness of rot is highly variable, according to Tennessee-based industry-expert Mike Freeman, who often serves as an expert witness in lawsuits related to wood decay. He said "heart rot" on the inside may not be catastrophic if the outer shell is solid.

“Seventy to ninety percent of a utility pole’s load-bearing capacity is in its outer two inches,” he said in an interview. And that outer shell is more protected than the inside, he said, because it’s soaked in preservatives that don’t penetrate to the center. As a result, if the rot is limited, the pole is likely still stable. “It really doesn’t matter a lot unless it’s severe,” Freeman added.

The seriousness of external rot is also highly dependent on the location and depth of the decay, said Freeman. If the rot is working against the weight on the pole, “then you’re pulling against an open wound and the pole’s going to fail,” he said.

When asked if the rot played any part in the poles’ collapse, Moore, the City Light spokesperson, said “the investigation is still underway.” Media has been barred from viewing the collapsed poles.

Bingel, the consultant, worked for 30 years at Osmose Utilities Services, near Atlanta, which works toward strengthening utility structures. He’s currently the chair of the National Electrical Safety Code, which sets standards for utility infrastructure safety.

Bingel said he has so far made one field visit. His main objective, he said, is to create software models of the poles to see how much they were loaded with weight. He’s still early in that process.

“I can’t say that any situation is the same,” he said of his approach to the issue. “Your first thoughts are, well, if a pole goes over, what was the load and how strong was the pole and what else occurred? It’s those kinds of things, but there are multiple factors that come into play.”

Seattle City Light owns or co-owns about 93,000 utility poles, made of both wood and steel. About 550 of those have been labeled as Priority 1, meaning they require immediate replacement, according to data provided to Crosscut. More than 4,000 have been labeled Priority 2.