In the era of climate disaster, camping with your kid is an act of defiance

Raising kids to love the outdoors is a mixed bag when you know our planet's future is dire. But it can be a radical act of hope. 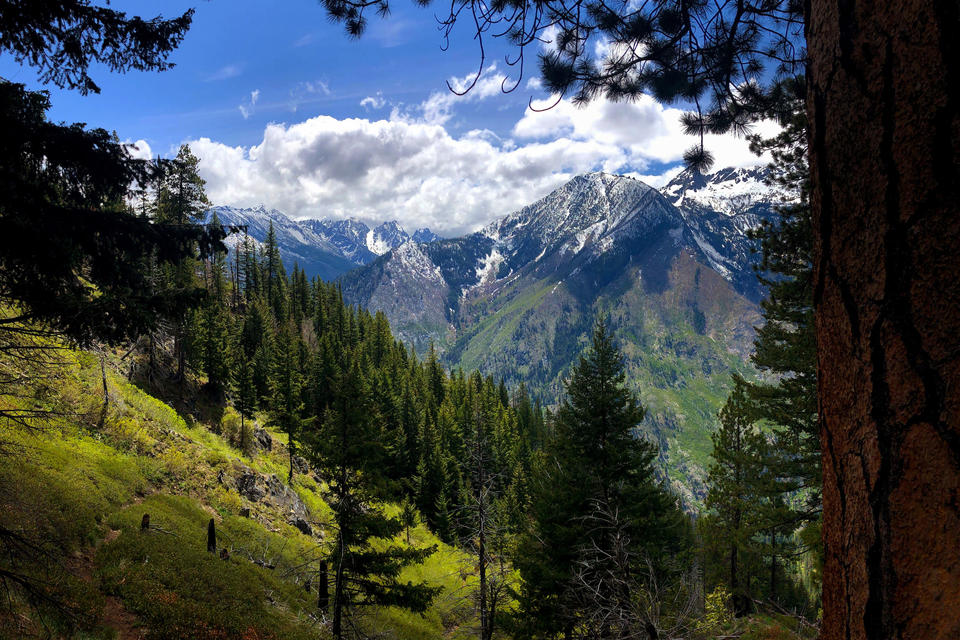 Fourth of July Creek Trail pictured on May 18, 2019 in the Alpine Lakes Wilderness, Leavenworth, Wash. Photos by Sarah Hoffman/Crosscut

We were walking along a trail sandwiched into a narrow strip of woods between a row of campsites and the Tucannon River. A pair of girls whizzed past us on bicycles. In a pack on my husband’s back, in front of me, was our 13-month-old son. It was cool under the trees, but in the moist air along the river, the mosquitoes were out in force. One landed on the baby’s left ear as I watched, and I wondered why the hell were we doing this, but then a veery began singing somewhere nearby, I caught sight of the sunlight glinting on the water through the brush, and for a moment everything felt okay.

This was our first time taking our son camping. Not having any experience doing this with a tiny human in tow, we thought it would be sensible to start small, with a single night at a state park about 30 minutes from our home in southeast Washington. It was really just a patch of trees by a river surrounded by rippling green wheat fields that would be dry and brown by the end of summer, the campground populated mostly by RVers stopping over on cross-country treks. But in addition to the mosquitoes, it had yellow warblers flying through our campsite, muskrats swimming in a side creek and a reputation as a good spot for trout fishing. We figured it would do as well as anywhere for a test run of sleeping in a tent with an almost-toddler.

It took me a while to decide for certain that I wanted to do this at all. Nothing else in my life is quite as effective as a walk in the woods for calming the clamor of my anxieties or quieting the never-ending to-do list in my brain. I never feel more content, more myself. I want my son to see that part of me, and I hope that a sense of kinship with the natural world might enrich his life, as it has mine.

But I worry. By encouraging him to cultivate that same connection, am I only setting him up for a painful future? He’ll live to see the unfolding climate crisis diminish our planet’s living beauty in ways that will be permanent and painful. I’m afraid that by teaching him to love streams full of salmon and woods full of songbirds, I’m betraying him, dooming him to a bitter, grieving adulthood when the streams are empty and the woods are silent. Would I serve him better by spending my weekends, say, volunteering with climate justice campaigns, rather than teaching him to make s'mores and identify constellations and bird songs?

I try to justify it to myself with data. Researchers have found a connection between early experiences in nature and environmental activism later in life; kids who play in the woods become adults who invest their time and energy in taking care of the planet. There’s also evidence that kids who spend time in nature do better in school, are healthier mentally and physically and are even more generous and altruistic than their peers.

That’s the kind of kid I want to raise. But ultimately, it wasn’t the statistics that made up my mind. It was a feeling — hope. Taking our son camping has become my stubborn way of hanging on to hope that a beautiful future is still possible. So we went to the woods.

For the most part, it turns out, camping with a 1-year-old is not particularly relaxing. I struggled to entertain our energetic little boy while my husband put up the tent and made dinner, and later it was a huge relief when, about 10 minutes after we put him to bed, he finally fell asleep. But the weekend wasn’t really about relaxing; it was about setting the tone for the kind of family we want to be.

And we survived. In fact, when we got home the next day — after changing a poopy diaper, coaxing my son to take a nap in his crib, showering, unpacking and hosing a mysterious sticky substance off our tent — I made a reservation for another night the following month at a different campground. This one was a little farther away, at a trailhead for a path along a river up into Washington’s Blue Mountains.

How can I help my son build a strong relationship with something that’s changing before his eyes? How can I tell him to build his sense of self on something that won't be there for him in the same way in five years, 10, 50? I’m still figuring it out. But here’s the thing — change and loss are part of parenthood, too. My son is changing every day, the tiny baby I held last year already has gone for good, and I can’t know what the future holds for him. All I can do is try to take good care of him, advocate for him, love him and teach him how to hope.

This story was originally published on High Country News on Sept. 17, 2019.

Rebecca Heisman is a science communicator and writer who lives in Walla Walla, Washington.