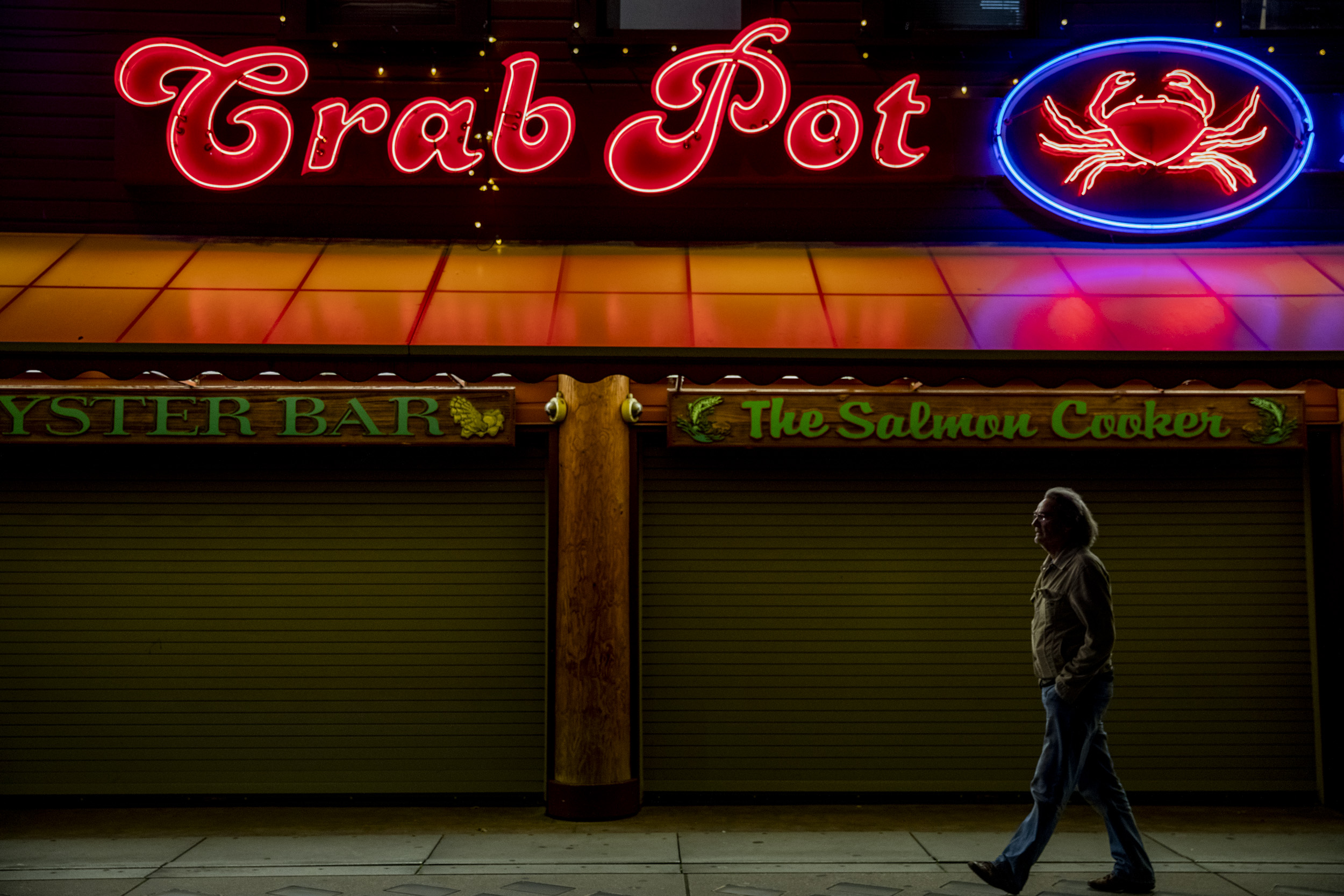 A man walks in front of the Crab Pot neon sign on the waterfront in Seattle on Sept. 16, 2019.

Short of the Space Needle, it’s hard to think of a more iconic Seattle sight than the red neon “Public Market Center” sign, subject of countless postcards and backdrop to millions of Instagram selfies. But the old neon signs you’ll spot as you walk around Pike Place Market are but a fraction of the neon that was once ubiquitous in mid-century Seattle.

Even some of the great neon signs of the past have been replaced with LED substitutes: As of 2013, the Rainier “R” beside I-5 is no longer made of neon, but out of 470 LED bulbs. (The original “R” now lives in the Museum of History and Industry, or MOHAI.) In 2016, the “City Light” sign in SoDo was swapped out for LED rope lighting.

The P-I Globe on the waterfront may be one of the most iconic remaining pieces in the city, but it’s in desperate need of repair, as I saw firsthand on a recent nocturnal tour of dozens of Seattle’s signature neon signs. North America is missing a border, and the yellow eagle sitting atop the planet flickers uncertainly in the night. (Last year, the Post-Intelligencer reported that it would cost approximately half a million dollars to refurbish the globe.)

That’s not the only neon sign that looked a little worse for wear during my nighttime survey: The historic “Rooms 75¢” State Hotel sign in Pioneer Square, for example, was only half lit: “s 75¢.” The Dick’s on Holman Road just said “Dic” on one side. My personal favorite — the Mac’s Upholstery sign in Ballard — needed some minor fixes. But the real heartbreaker was the revolving sign at the Elephant Car Wash by Denny Avenue: The bulbs on the top half of the pachyderm were out.

Neon, as any crossword solver knows, is “gas in glass,” sealed tight in carefully crafted tubes that emit bright colored light when electrified. The effect is magical — but if a tube breaks, it must be replaced. A simple patch-up won’t do. That’s why you’ll often see entire letters or words missing from a neon sign. LEDs, by contrast, are encased in plastic, so they’re less liable to break. Their durability and their reduced energy consumption make them an increasingly tempting neon replacement.

Seattle has bigger problems on its hands than neon getting replaced with LEDs or falling out of repair. But it’s often the little details that help give a city an identity — and neon signs, inconsequential though they might seem, have undoubtedly earned a place in Seattle’s skyline. They act as literal beacons in the darkness of long winter nights, and they earn an irrational degree of affection in the process: What else can explain why the restoration of the Rainier “R” became a high-profile campaign that culminated in a party? Or why the fate of the P-I Globe has long been a source of anxiety for Seattleites?

Given the importance of these neon landmarks to the city, it’s worth asking: What’s lost when signs like the “R” and “City Light” make the shift to LED? And what will take the place of neon in the Seattle of the 2020s? What might signify Seattle in the next decade?

A century ago, MOHAI Executive Director Leonard Garfield tells me, “Neon coincided quite literally with Seattle’s coming of age.” In the 1920s, Seattle was a booming industrial center, neon was popular, and the city was eager to show the world that it mattered.

“I think neon was a visual way of signifying that this was a place of sophistication, this was a 24-hour place, this was a place that had bright lights and big stores and exciting activity,” says Garfield. “So the development of neon as a feature of the Seattle skyline really [lines up] with Seattle’s own self-consciousness as an important place.”

If I had taken my late-night drive in the middle of the 20th century, I would have seen more neon —“an awful lot of neon,” says Garfield. When major players like the Rainier Brewery and the Post-Intelligencer put up their signature signs, “suddenly every small business and corner bar wanted to mimic that,” he explains.

But neon fell out of fashion in the 1980s, becoming more of a boutique industry than a go-to signage option. Pike Place Market remained committed to the format, largely because of  its historical significance. Walk through Pike Place today, for example, and you’ll see a neon sign for Loback Meat Co. Even though Loback went of business in 1989, the Pike Place Market Preservation and Development Authority maintains it to this day.

John Trumbull, director of asset management of the Pike Place Market PDA, says the market’s neon signs are “moderately expensive to maintain,” mostly because entire glass tubes have to be pulled down and replaced. A routine repair can cost as much as $700.

But the “Public Market Center” sign isn’t at risk of going LED anytime soon: “It’s not really a question for us,” says Trumbull. “We’re a nationally registered historic district and we do a lot of things inefficiently because that’s the way we always do ’em.”

But private businesses like the Elephant Car Wash and public utilities like Seattle City Light may not have the same luxury to go all-in on neon right now. Alex McGuire, marketing coordinator at Western Neon sign builders, says many local businesses are reaching a “turning point” with the repair of their neon and “are now having to assess whether this type of maintenance is something they are comfortable with, or if they want to put up the pretty steep initial costs of converting to LED.”

Signs like the rotating elephant, says McGuire, are especially vulnerable because they’re in more highly trafficked areas. In such cases, businesses might strategically wait “for lots to fall out of repair [before] getting it all fixed at once.” Now that neon is no longer as commonplace as it once was, those repairs can be costly, color matching can be challenging and turnaround times can be lengthy.

Still, local sign makers agree that there’s nothing quite like neon: “Neon has a lot of emotional pull in people,” McGuire tells me. “LED can make great things, but you never look at an LED faux neon piece and think, ‘Wow, someone made that.’”

Steve Smalley, who does marketing at National Sign, likewise thinks there’s something special about neon. (National is responsible for much of the neon on the waterfront, like the signs at The Crab Pot and Miner’s Landing.) “It has a warmth,” says Smalley. Even though National primarily works in LED, Smalley says some clients still demand neon because they know that customers love it.

It’s true that LED lights are more energy efficient than their neon counterparts, which can mean savings for those who make the shift. I asked Seattle City Light officials why they redid their iconic sign in LED, and they said that LED rope lighting was “deemed to be most appropriate,” referring to a blog post that said the change “will save energy and save money.” (Western Neon, contracted to do the replacement, also pointed out that some  pieces of the sign are so large that they can’t fit in the company’s glass department.)

But lest one thinks that LED signs are a slam-dunk for the planet, McGuire says “they aren’t as easy to ethically recycle when they go bad because of all the intricate circuitry and small pieces.” That’s not to say neon is the more environmentally friendly form of lighting — neon lights contain mercury and must be recycled at approved sites — but LEDs, like all things that consume electricity, are not without their downsides.

Aesthetically, LEDs don’t hold a candle to neon. Drive by the new Rainier “R” and the “Public Market Center” sign in the same night and you’ll see what I mean: One passes for neon for a second before you notice that it’s not the real deal; one shines ethereally against even the darkest winter sky.

The good news for this nostalgic writer is that many of Seattle’s neon signs are still well-maintained, as I learned on my impromptu survey of the most famous ones. Jesus is still saving souls over at the Philadelphia Church on 24th Avenue Northwest. The storied “Wallingford” sign, replacement for the beloved “Food Giant” sign of yesteryear, still glows bright and blue over that neighborhood’s 24-hour QFC. The Oberto Sausage Co. on Rainier Avenue South still proudly declares, “Oh boy, Oberto!”

The Seattle of 2050 will have less widespread neon than the Seattle of 1950, and that will be as much of a shame as it is an inevitability. Some business owners will decide the upkeep is no longer worth it; landmarks will go dark.

But that’s not to say neon will die outright: McGuire says “LED has become more of a competitor to neon than it has been in the past,” but that Western Neon still makes the case for its namesake with clients, arguing that “it’s a much better pay off for aesthetics.”
And Smalley says that neon signs remain “a big part of [their] business” even though most National Sign clients these days want LEDs. Meanwhile, Western Neon’s art school is reportedly packing classes with artists eager to work in the format.

Newer businesses like Rachel’s Ginger Beer and Flintcreek Cattle Co. are still requesting neon, but gone are the days when every shop wanted that signature glow. The Seattle of the future is one in which boutique and upscale businesses still spring for neon, as Garfield explains: “Neon is back again, but now rather than being something that everybody does, it’s something that people who are being very self-consciously hip or trying to make a distinct statement are turning to, [whereas] 50 years ago, it would have been the go-to thing right away.”

The Seattle that put up the enormous “Add Bardahl” sign in Ballard is now a city where newer businesses are opting for small, impactful pieces of neon — beautiful enough to evoke nostalgia and draw in customers, but not large enough to light up the skyline. If neon once signified a Seattle on the rise — a city eager to announce to the world it had arrived—perhaps it now reflects a late-capitalist Seattle that has in part become a playground for millennials in search of little luxuries. Neon, with its undeniable aesthetic allure, now says, “Come inside and spend a bit too much on something delicious, something stylish, something new.”

But I will take comfort in the fact that the P-I Globe will stay neon for the foreseeable future, a relic from a time when neon meant something aspirational.

Leonard Garfield assures me that MOHAI has agreed to “take on stewardship of the [Seattle P-I] globe once we find another location for it.” For now, the globe is secure in its current location on an Elliott Avenue building just north of the Olympic Sculpture Park, even though it’s in a state of disrepair. “But once there is a decision on where to relocate the globe, we would want to do a complete restoration,” says Garfield, “including restoring the neon.” It will be costly, but given the place of neon in Seattle’s history, it’ll be worth it. 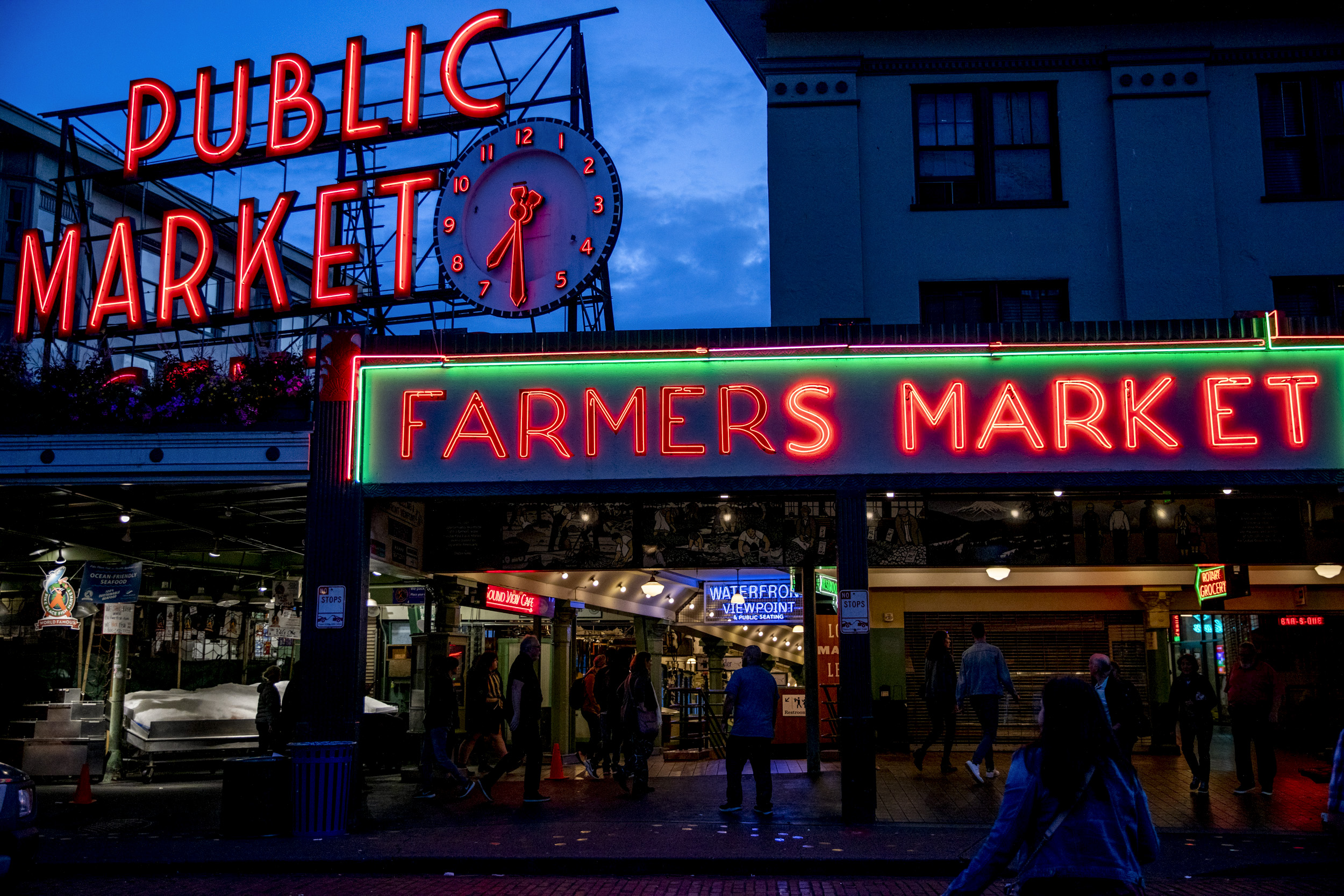