Years into a homelessness ‘emergency,’ Seattle and King County propose a unified response

Both the city and the county would turn over most of their homelessness budgets to a new governmental body. 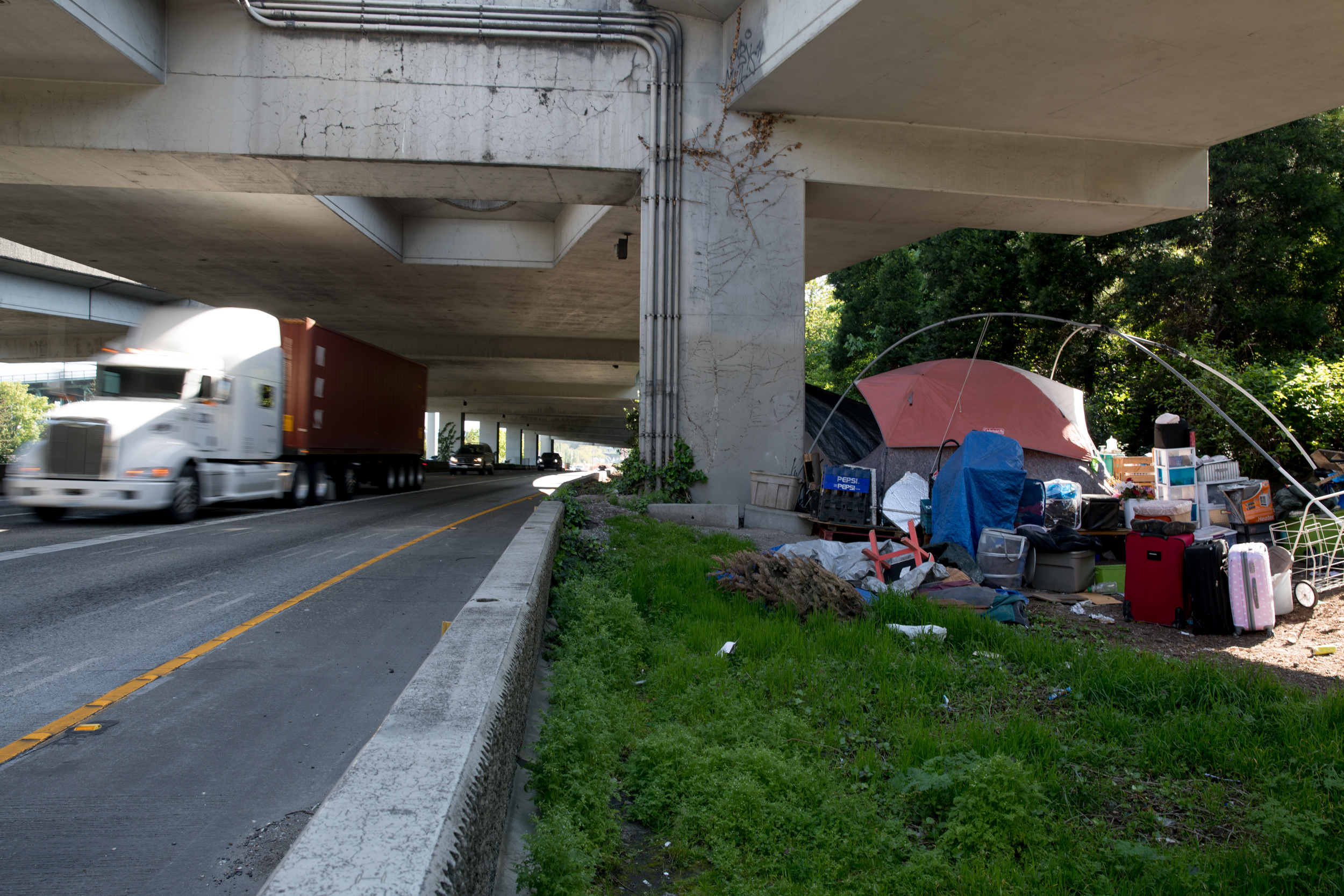 A homeless encampment underneath a freeway overpass in Seattle. (Photo by Matt M. McKnight/Crosscut)

Seattle Mayor Jenny Durkan and King County Executive Dow Constantine on Wednesday took the most substantive step yet toward coordinating the region’s response to homelessness between the city and the county.

Backed by several mayors and council members from cities across the county, the two unveiled a proposed new governing body, the King County Regional Homelessness Authority (KCRHA), through which most homelessness resources and oversight would be routed.

The proposed governing body must win approval from the Seattle and King County councils and must also win budget allocations from both. But, if successful, the move would represent a significant shift in how Washington’s most populous city and county address what has became its dominating issue.

The new body, said Constantine, would “answer the challenge of our time: How to tackle a crisis that impacts all of our 39 cities and the unincorporated county with services that are hopelessly fragmented, not coordinated, often duplicative and confusing to our customers. Here this morning, I say, the status quo is no more.”

“We know what we’ve done before has not worked,” said Durkan.

For years, local leaders have spoken of the need for a more coordinated response to homelessness across King County — a perception based on the reality that homelessness is not contained by city borders and so it does not make sense to cordon off resources and expectations.

Service providers often hold contracts with the city, county, state and federal governments and also with an organization like the United Way — all of which have different requirements, priorities and performance measurements.

The new body would attempt to streamline some of these contracts.

When the city contracted with consultant Barb Poppe three years ago, coordinating these various organizations was among her primary recommendations. The King County auditor last year released a report similarly critical of the disparate systems within the county. Yet another report, from consultant groups Future Laboratories and the Corporation for Supportive Housing, also criticized the fractured system.

Efforts to date have been more half-steps. A group of county and city leaders called One Table met several times last year before merely issuing a set of recommendations. Another government initiative, All Home, has filled the role of a regional response, but it lacks real authority or governing power.

The new body, on the other hand, would assume much of the authority and budget of Seattle and King County — with other cities in the county possibly joining the effort.

Durkan called it “the start of a new era.”

Under the proposed legislation, the new body’s budget would be made up of existing funds from the city and county. Additional funds for housing construction would be kept within the separate governmental entities.

“In many ways the biggest leap of faith is the city of Seattle right now,” said Durkan. “Because we’re all in.”

The KCRHA would be made up of a steering committee of elected officials from around the county and an 11-person governing board. The board would include both experts and people who have experienced homelessness. The body also would have an executive director, hired by the governing board.

The change could mean job losses for employees of Seattle’s Human Services Department, who were notified last month that their employment was guaranteed only through 2020, The Seattle Times reported.

Additionally, All Home would be dissolved.

Seattle City Councilmembers Sally Bagshaw and Teresa Mosqueda  and King County Councilmember Jeanne Kohl-Welles voiced support or, at least, interest in moving forward. Kohl-Welles said she expected there would be amendments to the proposal, but that she believed it would get a fair hearing.

But in expanding the scope of the region’s homelessness response, Seattle and King County must also reckon with cities and elected representatives who may tilt in a more conservative ideological direction than in Seattle City Hall.

Even before Durkan and Constantine’s announcement Wednesday, King County Councilmember Reagan Dunn — who identifies as a Republican, even though his seat is nonpartisan — criticized the proposal.

“This is just another example of downtown Seattle groupthink on the issue of homelessness,” he said. Dunn criticized what he called the added “layers” of government and said he’s concerned the body would be used to spread Seattle’s approach to homelessness across the county.

“The policies that are being implemented in Seattle are failing to work. They’re failed policies,” he said.

Dunn said he would roll out his own policy proposals in the coming days, including hosting a summit where officials could “pound the table” on homelessness.

Dunn’s statements are indicative of an added challenge of the new body: seeking buy-in from the more conservative parts of King County. “That’ll be tough for the board and the executive director to manage,” said Jason Johnson, Seattle’s acting director of the Human Services Department. He added, however, that he hoped the proposal would force productive conversation. “What today provides is that regional consolidated authority where those conversations can happen, where that debate can happen,” he said.

Additionally, because the change would affect jobs in Seattle government, officials will have to negotiate with the city’s unions.

Durkan and Constantine’s goal is to win approval for KCRHA by December. If and when that occurs, the new body would need time to set up its governing structure and undertake a review of existing contracts.