Counting all the ways we still need affirmative action

An interactive exercise makes the case. 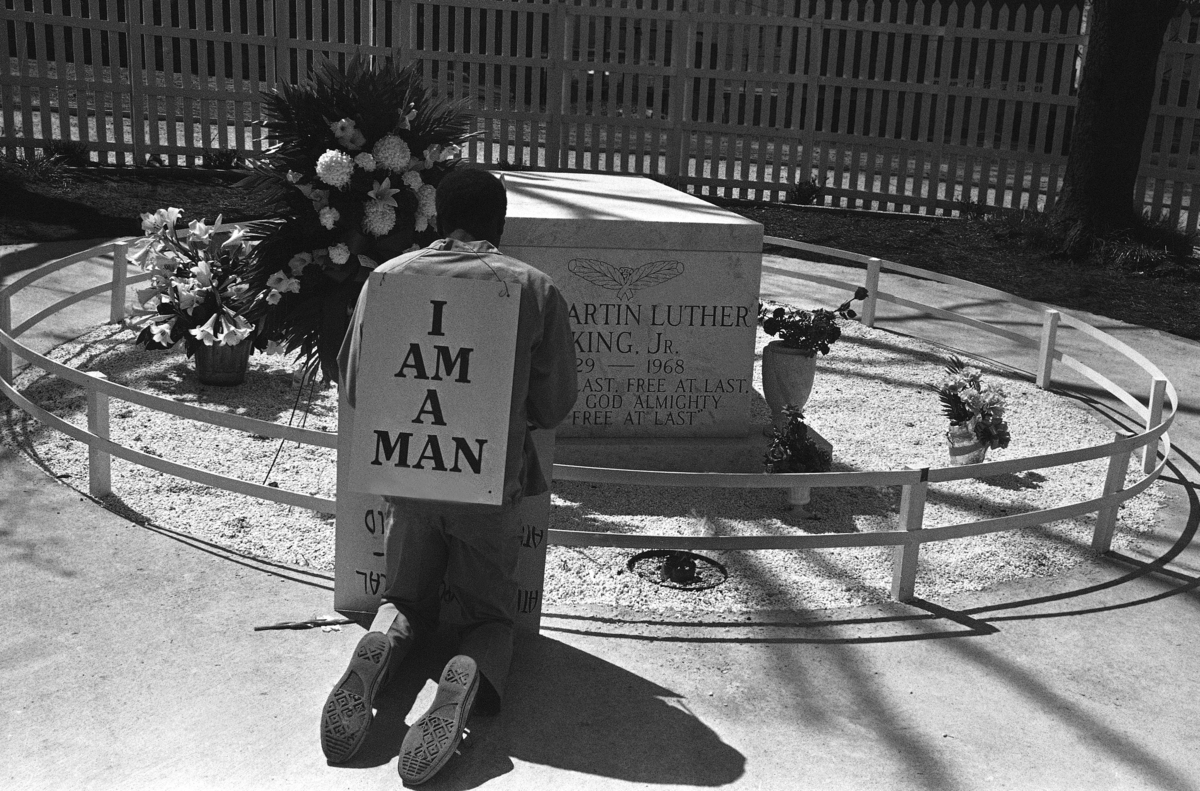 A striking Atlanta sanitation worker kneels at the grave of Dr. Martin Luther King Jr. after a rally in Atlanta on April 4, 1970. Following the civil rights, movement reforms such as affirmative action were eventually implemented to combat institutionalized inequality. In the decades since affirmative action has been debated and under attack. (BJ/AP)

This column is interactive. You will need:

Label one container “White,” and the other “Black.”

OK, come back after you’ve finished.

Done? Excellent. Your containers will hold:

Now create equity between the two containers. Come back after you’ve finished.

I can only come up with three ways to create equity: stop putting beans into the White container until the Black container catches up; reduce the number of beans being put in White until Black catches up (a much longer process); or, finally, put more beans in Black than in White until equity is reached.

Putting the same number of beans in both jars simply sustains the inequity at the exact same level. Putting all the beans into the Black container reverses the oppression. The only workable solutions are either to reduce beans placed into White or increase beans placed into Black. The former is taking negative action. The latter is affirmative action.

Some of you may be thinking, “My Irish/Italian/Jewish/etc. family didn’t get here until the 1920s or 1950s, and they faced discrimination.” Yes, they may have, but the law was always on their side. Note I said “the law,” not law enforcement. They had legal recourse against discrimination, whether or not it was being enforced. Within one generation these immigrants were wholly absorbed into whiteness and received all the accompanying protections and advantages. They could find or create jobs, attend schools founded by prior generations and live anywhere they wanted in any town in the country. Any loss of access to privileged resources was based on their personal choices and actions.

Moreover, as the exercise detailed above illustrates, whites who arrived later in history had the advantage of years, decades and generations of accumulated advantage. The education they received, for example, had been developed and refined over previous generations so they could develop the knowledge, skills and experience required to succeed economically, while Blacks had no access to that education. Whites who bought property had access to credit. When they died, they could pass the property value to their descendants.

The majority of Black residents, on the other hand, were denied even the most basic education, so when liberty did come, only a tiny fraction could read and write or perform anything beyond rudimentary math, not because of a diminished capacity for learning, but a result of being denied the opportunity to learn. This truth is underscored when we see Black progress in education, economics, property ownership and all other metrics between 1863 and 1877, the years of Reconstruction. That was followed by immediate and dramatic decline as white supremacist laws and practices were reinstated and enforced. This same widening success gap has been repeated between 1998, when affirmative action was repealed in our state, and today.

Imagine using other containers to conduct this same exercise with other racial groups. Consider the differences between the experience of Indigenous people, African Americans, people of Mexican, Central, or South American descent, Caribbeans, Pacific Islanders and Asians. What do you know about the journeys of each group within those categories? Vietnamese Americans have a very different history than Japanese Americans, for example. Chinese Americans were key to the development of the country in many ways, but they were not allowed citizenship until 1943, just one generation ago.

Mexican American and Indigenous people have a very complicated history since they were the original occupants of what is now the western United States. They essentially had their own jar of black-eyed peas, but it was summarily dumped into the White container in 1848, leaving them with nothing. Subsequent migrants from Mexico, as well as South and Central America, have been denied equal access to housing, education and other basic civil rights ever since, while European immigrants have been welcomed and afforded full access.

These patterns reappear in contemporary times with each new immigrant group. Whether they come from wealth or poverty in their homeland, within one generation white people are absorbed into the structure of power and privilege and allowed to succeed or fail as individuals. People of color, regardless of power or privilege in their homeland, are stripped of it within one generation and relegated to success or failure dictated by the benevolence of white society.

This exercise also can be used to show disparities in gender and sexual orientation, remembering that the disparities for women or LGBTQ people of color must be shown separately to get a true picture because race has always been the first filter of resource distribution. White women were the primary beneficiaries of affirmative action until it was outlawed.

Affirmative action is acknowledgement that our society cannot meet its aspiration of being an equitable nation until it makes right the inequities of the past. We must put more resources into some containers until they are at par with the one that has unfairly received an unending, inequitable serving. To stand against affirmative action is to either declare that equal opportunity has always existed, an obvious lie, or to proclaim that inequity should replace the aspiration of the founding document of the U.S. What we decide will reveal our cowardice or courage to coming generations. It is they who will pay the price, just as current generations must pay the price for their forbearers’ inaction.