What's Seattle doing to solve its shoplifting problem? Nothing really

Bartell Drugs and Uwajimaya are victims of the city's refusal to enforce criminal laws. 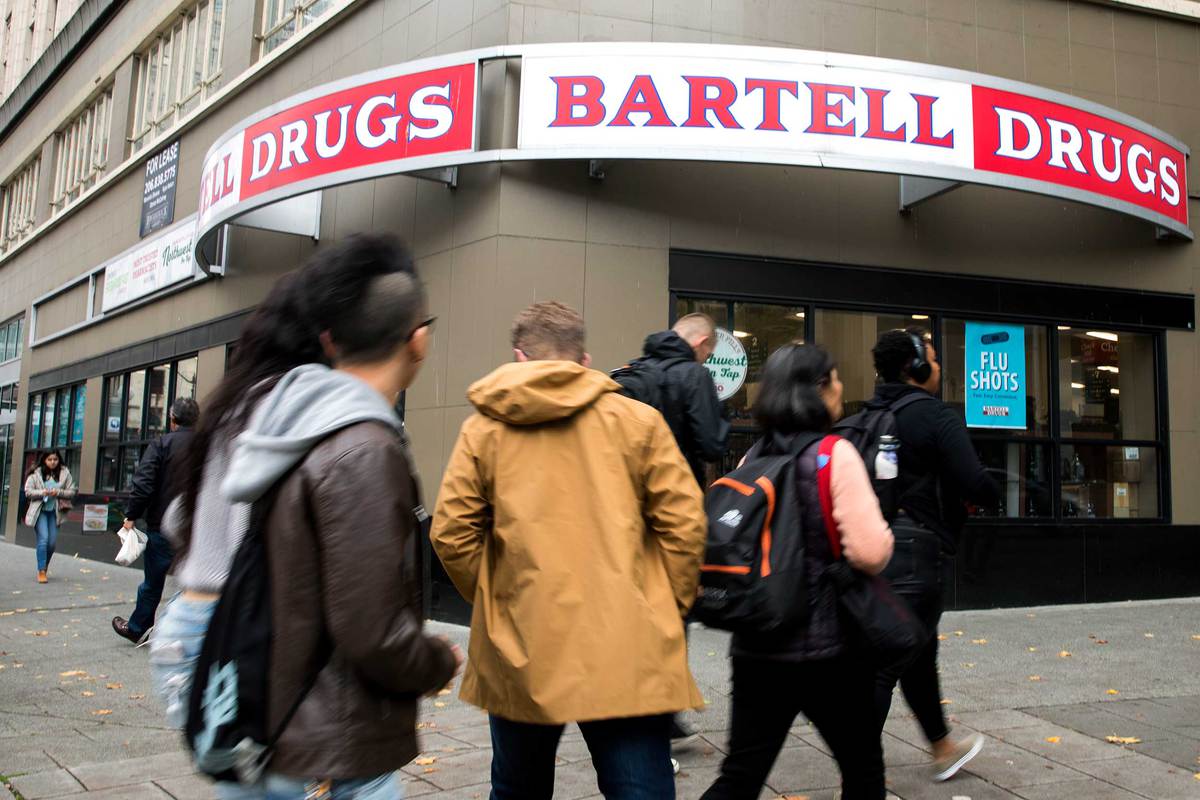 Pedestrians walk past Bartell Drugs in downtown Seattle, Oct. 18, 2019. The regional chain plans to close a nearby store in 2020 due to crime concerns. (Matt M. McKnight/Crosscut)

Is shoplifting still a crime in Seattle?

Exaggeration often tips its hat during conversations about crime, but the question isn’t rhetorical, it’s literal.

Laws against shoplifting are still on the books, but do words on legal parchment matter if the crime isn’t prosecuted and the law not enforced? What happens when the word gets around? Well, we’re finding out.

Let’s start with Uwajimaya, the popular Asian grocery chain. They have all but stopped reporting theft from their store in Seattle. Here’s why.

Uwajimaya’s flagship location in the Chinatown-International District referred 261 theft cases to authorities through the Retail Theft Program during much of 2018. That means either the thieves were caught in the act, or the store captured video of them stealing. Of those 261 cases, police let 166 perpetrators go — in the parlance of government-speak, police “held” the case — because the shoplifter had less than $25 in merchandise. Cops don’t bother filling out the paperwork and forwarding cases for less than that because it falls below the threshold used by Seattle City Attorney Pete Holmes for prosecuting shoplifters.

Dan Nolte from the City Attorney’s Office says, “We don’t comment on office filing standards — if someone thought a filing standard on any kind of offense was X, they might be tempted to do X minus 1.” He also points to a KUOW article by Sydney Brownstone last spring pointing out some theft cases at Goodwill that fell below or just above that threshold.

But at Uwajimaya all 166 cases under $25 went away. So we’re down to 95 cases. Of those, 44 were declined or have yet to be filed by the fall of 2019 (remember, these are 2018 cases). Twenty-eight others are “pending,” with bench warrants outstanding, which means the accused thieves have walked away and no one’s chasing them. Eleven cases were dismissed.

When you add it all up, of the original 261 cases in which the shoplifter was caught or recorded on video, eight cases went forward, resulting in a guilty plea, while three suspects agreed to a diversion program. That’s a total of 12 cases out of the original 261 — 4% — resolved in a way anyway near approaching accountability.

It’s reached the point where some shoplifters caught and turned over to police brazenly return to Uwajimaya the following day. According to store manager Alan Hamada, one stood outside the store, asking customers to write out a list that the shoplifter would go in and “get” for them — for a fee.

At Uwajimaya there are now between 10 and 20 “security incidents” a day, including theft, property destruction and harassment of customers or staff. CEO Denise Moriguchi told KOMO-4 News that the store loses thousands of dollars a week.

Keep this in mind the next time you hear the Mayor’s Office reporting a reduction in crime downtown. What’s decreasing, I suspect, is the number of crimes being reported.

One young man who’s stolen from Uwajimaya is Douglas Rich. According to his mom, who spoke with KOMO, he moved here a few years ago to enter rehab. Apparently it didn’t take. In September 2016, police and court records show he was arrested for the Uwajimaya theft and for stealing from Home Depot. It took the City Attorney’s Office half a year to file the case. Finally, in April of 2018, Rich agreed to a plea deal. The cases would go away if he committed no new crimes for six months.

He didn’t. Three months later he was arrested in the Northgate parking lot and accused of breaking in to 15 cars. His backpack was full of stolen goods and a “substance that appeared to be heroin,” according to a police report. He admitted his guilt.

He was released. Two months later, he was arrested doing the same thing in Queen Anne. He again copped to it and was released the next day.

Nine months after he was caught stealing from those 15 cars in Northgate, the City Attorney’s Office finally filed a case. A hearing was scheduled. Mr. Rich didn’t appear. That’s not much of surprise; Seattle Municipal Court points out that 65% of people charged with a crime who receive a summons don’t show up. A bench warrant — a request from officers to pick up the absentee defendant — was issued. No novelty there, either; there are 7,500 of them. No one will be looking for him — that’s how Seattle now deals with serial shoplifters.

Uwajimaya is hardly an outlier. Last month, Bartell Drugs, a 129-year-old, Seattle- based chain with 68 stores, announced it was closing its Third Avenue and Union Street location in downtown Seattle. Rampant theft was a key reason. How bad is it? According to The Seattle Times, Bartell will leave the building before its lease expires.

Like so much else going wrong in this city when it comes to the crisis of drugs, crime and street homelessness, this wound is self-inflicted from bad public policy, in this case the refusal to enforce criminal laws that are wantonly being broken. A devastating report last month by Scott Lindsay, a former city public safety adviser and one-time candidate for city attorney, points out that the City Attorney’s Office declines to file 46% of the criminal misdemeanor cases they receive from the Seattle Police Department (each of which takes, along with the arrest, about four hours of an officer’s time to prepare).

City Attorney Holmes’ predecessor, Tom Carr, declined to file about 17% of misdemeanor cases. We’re talking about thousands of thefts and hundreds of assaults and burglaries. When the City Attorney’s Office does file a case, it takes an average of six months to do so.

Holmes is not incompetent. He’s doing this on purpose. Is he “pro-theft”? Well, no. But he does seem to think that cracking down on low-level crimes committed by low income people in effect punishes their poverty.

There is a robust debate to be had about the best way to handle law breakers who, in some cases, steal to support a drug habit. One option that should never be on the table is doing nothing. But most of the time, nothing is what we’re doing. Even when shoplifters steal again and again and again.