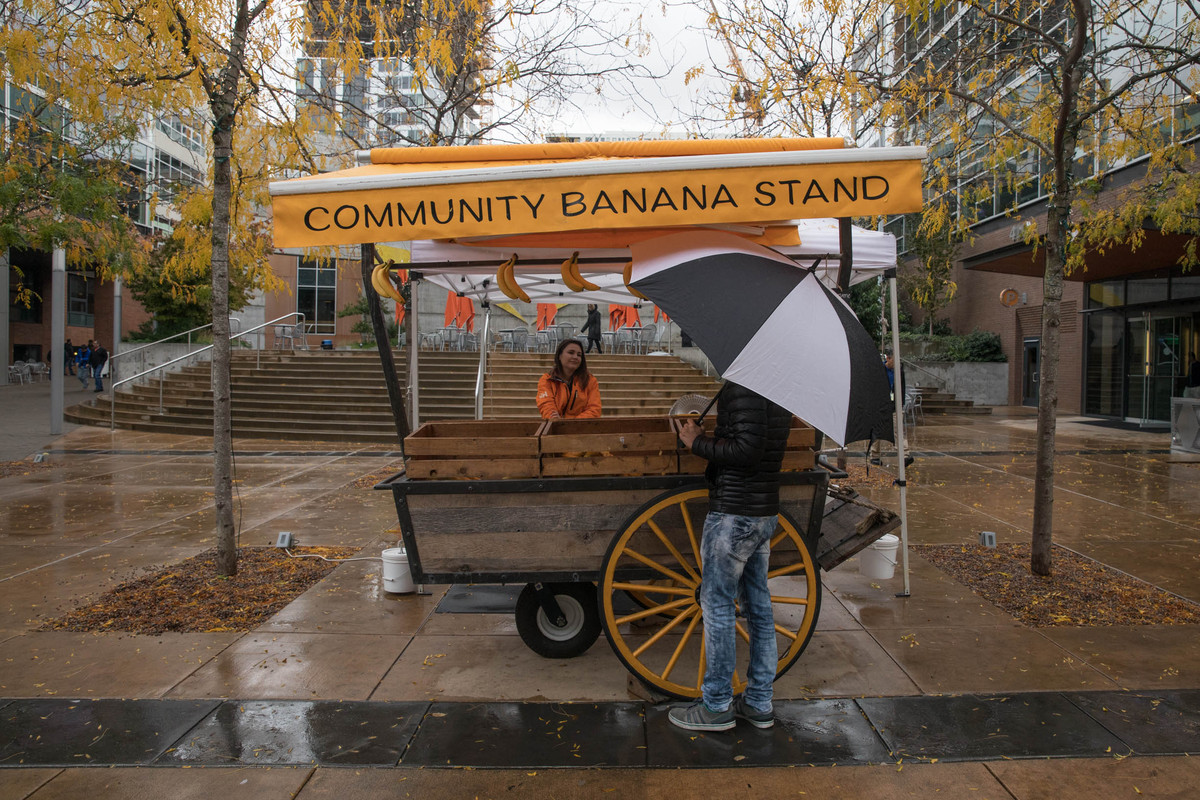 The Community Banana Stand on Amazon's Seattle campus in South Lake Union is one effort by Amazon to engage with its neighborhood. In 2017, the company handed out more than 1 million bananas to anyone who passed by, employee or not. (Matt M. McKnight/Crosscut)

After last week’s election, the Seattle City Council is more progressive — or “socialist” — than ever, despite the intense efforts of the  Seattle Metropolitan Chamber of Commerce and Jeff Bezos. A rejuvenated “Amazon tax” is likely to be proposed by the new city council, hopefully one less ham-handed than before. But a large question lingers: What kind of urban citizen is Amazon going to be?

I say “urban” because high tech companies are traditionally a suburban phenomenon, and the burbs have been a gentler place for expansion than the heart of a city. The prototype, of course, is Silicon Valley, south of San Francisco, and Seattle’s Eastside. In such places tech companies could sprawl, and successful entrepreneurs could build bucolic, campuslike facilities to coddle staffers in a think-tank kind of environment. Hardware companies required horizontal space for manufacturing and expansion. In the postwar period, the suburbs offered new housing and the “crabgrass dream” for growing families.

Margaret O’Mara, a University of Washington history professor and author of the new history The Code: Silicon Valley and the Remaking of America, observes that tech entrepreneurs also have a suburban mindset. Their rapidly growing suburban companies didn’t displace many people — it wasn’t necessary to raze working class neighborhoods when, in the case of the Valley, all you needed to do was bulldoze apricot orchards, O’Mara says.

Also deep in the high-tech mindset is the desire for low-tax environments. The suburbs are often low-tax places with smaller city governments to contend with, and they tend to provide a more welcoming environment. After all, many Eastside communities, like Bellevue, have been shaped and run by real estate developers. And even flourishing suburban communities are looking to further downsize local government, even as they grow; the suburbs are full of tax- and levy-averse residents.

There is also a deeply held myth among many tech entrepreneurs, O’Mara says. They often believe their success had nothing to do with the government when, in fact, government investment, contracts and tax policies have been integral to the industry — same too with the creation of the internet, itself a result largely of government-supported development. The tech titans did not succeed in a vacuum, even if they’d like to think so. But the attitude persists.

O’Mara has written that Amazon was located in Seattle because it was “the unsentimental choice of a detail-driven Wall Street analyst” named Bezos. He was drawn here because Washington state didn’t have an income tax and, in the beginning, his business was selling books and his biggest market was the sale of tech manuals in California. By locating here, his biggest customer base didn’t have to pay sales tax on their purchases.

Tech shifted during the dot-com era and the underlying move from hardware to software. Horizontal was no longer a big issue, so vertical was now an option: campuses were out, downtown high-rises in. Urban pushback began immediately as an influx of young, single, high-wage, childless workers — many millennials and, increasingly, Gen Zers — arrived to the denser, settled confines of the city, their large wage differentials prompting an affordability crisis. Seattle and San Francisco, lifestyle cities adjacent to tech burbs, are poster children for the shift. The suburban mentality of disconnection from community, low taxes and assumed cooperation from locals are no longer tenable in cities.

The funny thing is, the employees at the heart of tech’s business model — the recruitment and retention of highly skilled young workers — instinctively get this, even if their bosses don’t understand that it requires adjustment. Many tech workers now want urban, not suburban (Bellevue is in transition from burb to urb); they want lots of amenities and urban appeal, live-work arrangements in town, not lawns and cul-de-sacs. What they want comes in higher-tax cities, cities where, for one, you need new and better infrastructure for transportation. Cities fraught with problems that are exacerbated by tech’s presence, especially housing affordability and  homelessness. This applies to Seattle, but also to urbanizing suburbs, like Bellevue.

At a speaking engagement a few weeks ago, I asked O’Mara where she saw tech putting its money in the 2020 presidential race. She said she thought the big companies would carefully balance their giving between parties, but that their employees would more likely be giving to Elizabeth Warren, who thinks there should be an upper limit on billionaires like Bezos and Bill Gates. This suggests a kind of internal contradiction, a difference between what’s good for the company and what’s good for the citizens, including those who are employees. Some of those dynamics likely played out in the Seattle City Council election — the Amazon engineer who is a Kshama Sawant voter, perhaps.

What does Amazon need to do? “They need to change the way they behave,” says O’Mara. They need to develop a mindset that is much more broadly civically engaged with the city itself. The big money Amazon pushed out in the election was a form of civic engagement, even if it didn’t have the effect they hoped. “At least it signaled new engagement,” she says. 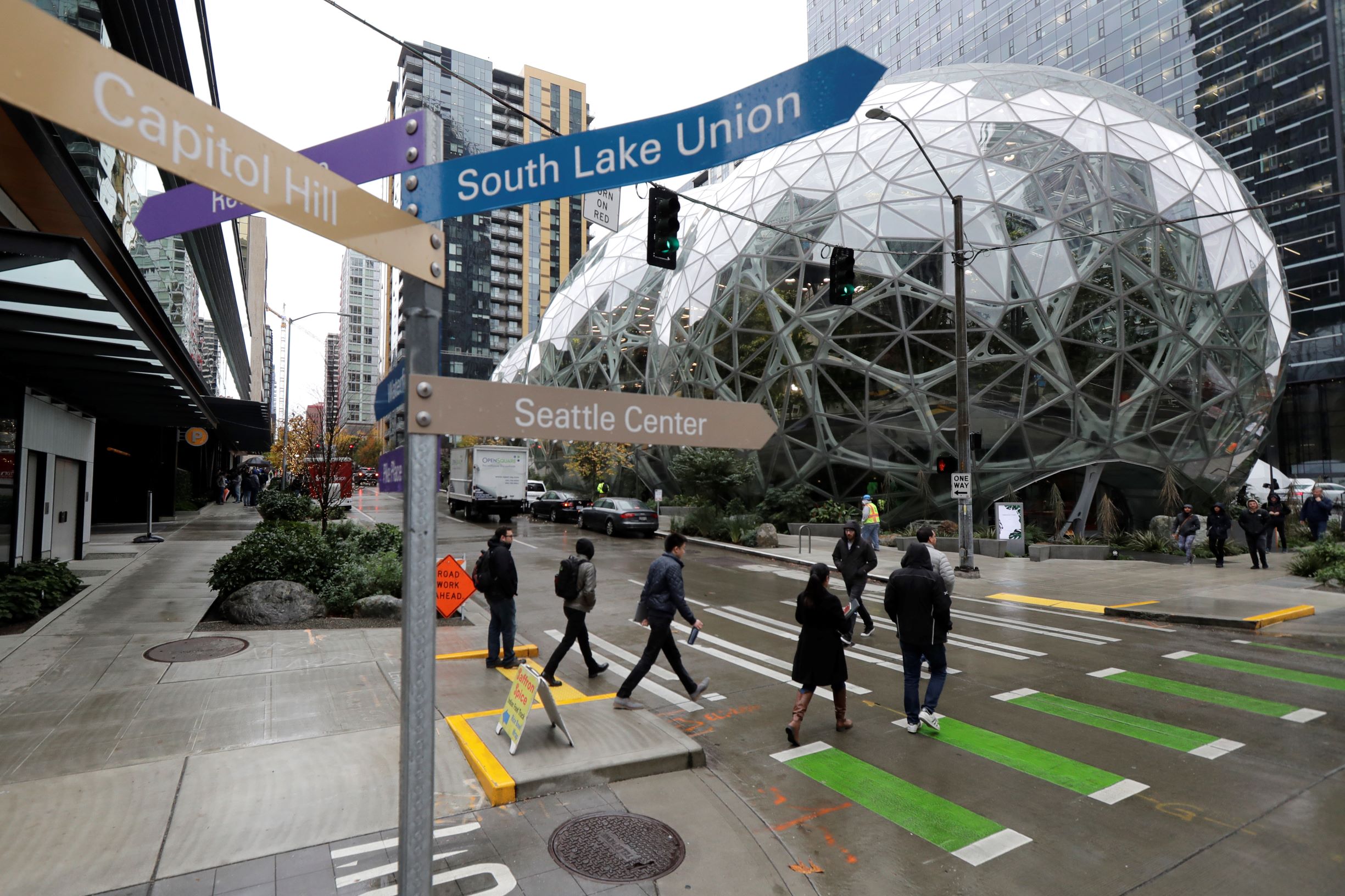 Pedestrians walk near the Amazon Spheres in downtown Seattle as a sign points the way to the city's South Lake Union and other neighborhoods. As the tech giant grows across the world and embeds its roots deeper into Seattle, the company's potential for civic engagement grows. (Ted S. Warren/AP)

Pedestrians walk near the Amazon Spheres in downtown Seattle as a sign points the way to the city's South Lake Union and other neighborhoods. As the tech giant grows across the world and embeds its roots deeper into Seattle, the company's potential for civic engagement grows. (Ted S. Warren/AP)

But they’ll have to be much more involved in shaping a healthy and dynamic city if they want to function here. Helping out Mary’s Place is wonderful, but there’s a much broader potential for connection. Boeing, for example, used to encourage its executives and employees to join nonprofit boards and run for office. It became an integral part of the community. Microsoft has matured into a similar phase as well.

The return to cities can be good for tech if the companies abandon their suburban thinking, their sense that, out there, companies are on another plane of existence, disconnected, in their own libertarian low-tax bubbles. That attitude certainly won’t help Amazon deal with issues in its own self-interest, like clearing congestion for its deliveries. Nor will it help the bigger picture of urban health and economic opportunity for more people.

O’Mara says we shouldn’t blame tech for our problems — many are systemic issues that predate Amazon, but its arrival has “caused the flare-up of a chronic illness,” she says. One aspect of that is distrust of government, and a lack of willingness to pay for things that won’t benefit one directly (I think of it as the “I’m-not-paying-for-mass-transit–because-I-want-$30-tabs” syndrome). She thinks that Amazon needs to “take its place at the table” with groups like the Puget Sound Regional Council, where she says major employers like Boeing, Microsoft and the University of Washington “have well-worn seats.”

It won’t ever be perfect, “where everyone holds hands and agrees,” she says, but “some engagement is better than none.” So one takeaway is that this election might be a good step for Amazon maturing into a better citizen if it can shed some of their old suburban-style mentality and join the generations they employ here.