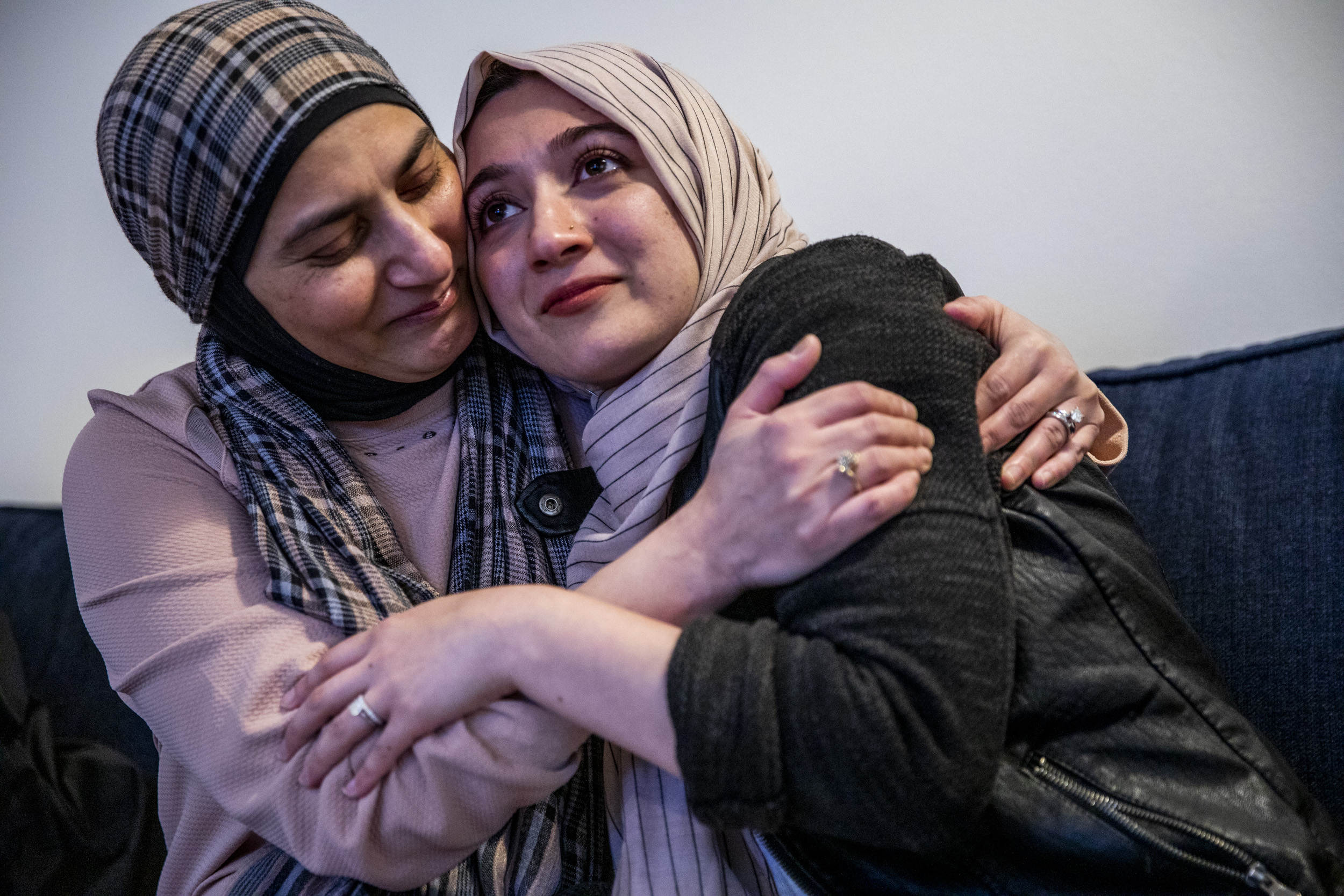 Varisha Khan, right, celebrates with her mother, Noreen, in her home after learning the latest results of the Redmond City Council race on Nov. 12, 2019. Khan is currently leading the incumbent, Hank Myers, by 47 votes for Position 1. If she wins, she will be one of the first two Muslim women elected to office in Washington state. “This moment in time, the soil is fertile for diverse candidates to come up.” Khan says. “This is the perfect place for me to give back and change what city council looks like because right now City Hall does not match our community.” (Dorothy Edwards/Crosscut)

Two very different communities in Washington state are on the verge of making history following this year's general election.

Across Lake Washington from Seattle, in the suburb of Redmond, Varisha Khan is holding on to a narrow lead in her race for a seat on the Redmond City Council. Across the state, in the Tri-Cities town of Pasco, meanwhile, Zahra Roach has clinched a seat on that city’s council.

According to the Council on American Islamic Relations (CAIR) in Washington, while a Muslim man has been elected before — Zak Idan in 2017 to the Tukwila City Council — Khan and Roach are, if current results hold, believed to be the first two Muslim women elected to public office in the state. Another Muslim woman, Amina Ahmed, who tragically died in a car crash last year, had been appointed, but not elected, to the SeaTac City Council.

“I think both races have shown the power of communities of color becoming more and more civically engaged,” said Masih Fouladi, executive director of CAIR Washington.

According to a report on American Muslims in public office, from 2016 to 2019 approximately 138 Muslims have been elected to office nationwide. Last year, U.S. Reps. Ilhan Omar of Minnesota and Rashida Tlaib of Michigan became the first Muslim women elected to Congress. This year alone, at least 33 Muslim candidates won elections in local and statewide races across the country, said Jessica Schreindl, communications coordinator for CAIR-WA.

Khan, 24, who trailed her opponent in early returns, took the lead over three-term incumbent Hank Myers late last week. She currently leads him by 47 votes. Khan would need to lead by 65 votes or more by Nov. 26, when the votes are certified, to be out of recount range, said King County Elections communications officer Halei Watkins. Khan graduated from the University of Washington in 2017 with a bachelor’s degree in journalism and political science. If elected, she would also be the youngest member serving on the Redmond City Council.

When asked about her decision to run at such a young age, Khan said she hoped to help start building a bench of diverse candidates to serve locally and thought, “Why not here, why not now?”

While others warned her that Redmond was not ready for its first female Muslim candidate, Khan said she “felt like this is the year that we have a chance to really step up.”

Khan admits she also “knew it would be an uphill battle.”

“I knew it would be a challenge,” Khan said in a telephone interview while noting that her aim was to work three times harder than her opponent, who benefited from more name recognition.

With regard to faith, Khan, who wears a hijab, said questions about Islam were a bigger factor at the beginning of her race.

Khan said she also attracted media attention from conservative blogs and radio programs like the Jason Rantz Show on KTTH in Seattle and John Carlson’s show on KVI (Carlson is a Crosscut contributor). The conservative blog “Shift” attempted to disparage Khan by comparing her to Seattle City Council member Kshama Sawant and other socialists, like U.S. Rep. Alexandria Ocasio-Cortez of New York. The blog referred to Khan as an extremist and anti-Semite. The conservative media outlets also called out Khan for her association with Linda Sarsour, a Muslim and former leader of the Women’s March on Washington, who along with two others, stepped down after charges of anti-Semitism. 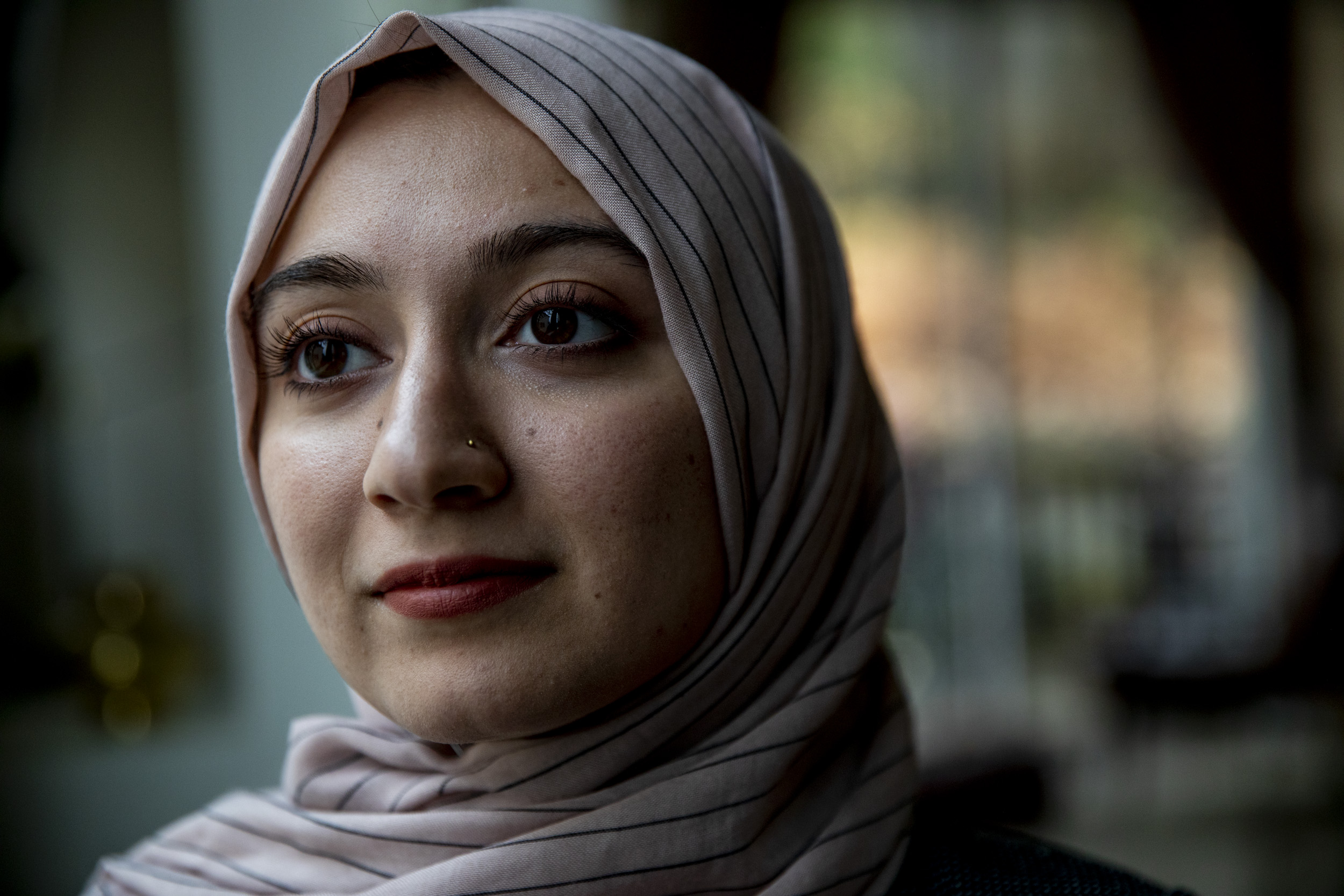 “My opponent went on those radio shows proudly,” Khan added. He “did not denounce the claims they were making about me. … The Islamophobic narrative that was being spun around me was definitely very telling of the type of politics that was starting to play out in our race.”

Khan also fielded questions about whether foreigners were as invested in schools and other local institutions. Khan’s parents immigrated from Pakistan; she was born in Dallas.

Khan said she “knew that there are people already perceiving me negatively because of my identity, I mean, without knowing anything about my background.”

In response to questions, Khan's opponent, Myers said: “I have nothing bad to say about Muslims. I think this whole issue of religion is being overblown.” Myers said he has supported Muslim candidates in the past and has a good working relationship with mosques in the area.

Over in Pasco, religious identity didn’t play as big a role in the city council race there, Roach said. Roach said she wasn’t even aware that a win would make her one of the first Muslim women elected in Washington state.

“I was completely surprised by it,” said the 37-year-old Roach. “It was not on my radar.”

Roach, a mother of three and former teacher, said although she identifies as Muslim, unlike Khan, she chooses not to wear a hijab.

“I would talk about being a daughter of immigrants and what that looked like in Eastern Washington and that would most definitely include being Muslim,” Roach said. She added that sometimes, in a rural, agricultural town that is heavily Latino, people simply mistook her for a Latina.

“I don’t really feel like religion has much place in the position that I’m running for, or [that it is] really relevant,” Roach said in a telephone interview. “I feel like I’m a superqualified candidate.”

Roach served on the Pasco Planning Commission, what she referred to as the city council’s workhorse, for the past eight years, presiding over public meetings on issues such as land use and zoning. Roach had run for office last year for the seat of county commissioner but lost. The experience, she said, helped mentally prepare her for this year’s race, both as a woman of color and a Democrat in a county that overwhelmingly voted for President Donald Trump.

Like Khan, Roach was born in the United States to parents from Pakistan. She, too, was questioned about her loyalty to the U.S. Rumors circulated online that Roach was not a U.S.-born citizen. Roach was born in Anchorage, Alaska, she said.

Now that she’s been elected, Roach said she will focus on issues surrounding growth and mobility.

“While, yes, being the first Muslim woman is an honor, there’s really big things at stake for everyone in the community,” Roach said. “I’m committed to making my hometown and this area a better place.”

Khan, for her part, said she planned to focus on environmental concerns, pushing for a Green New Deal and a ban on plastic bags.

Speaking of the two candidates, Aneelah Afzali, executive director of the American Muslim Empowerment Network of the Muslim Association of Puget Sound (MAPS-AMEN), said: “I think they are a voice for everybody. I think they’re representing all constituents," Afzali said. ''But I think it’s important to have a diversity of voices on city council” to, for one, watch for policies and decisions that may disproportionately impact people of color.

This story was updated to clarify the criticism Khan received from conservative outlets and Roach's focus on the Pasco City Council.

Editor's note: Due to the number of comments violating our terms of service, the comment section on this story has been removed.