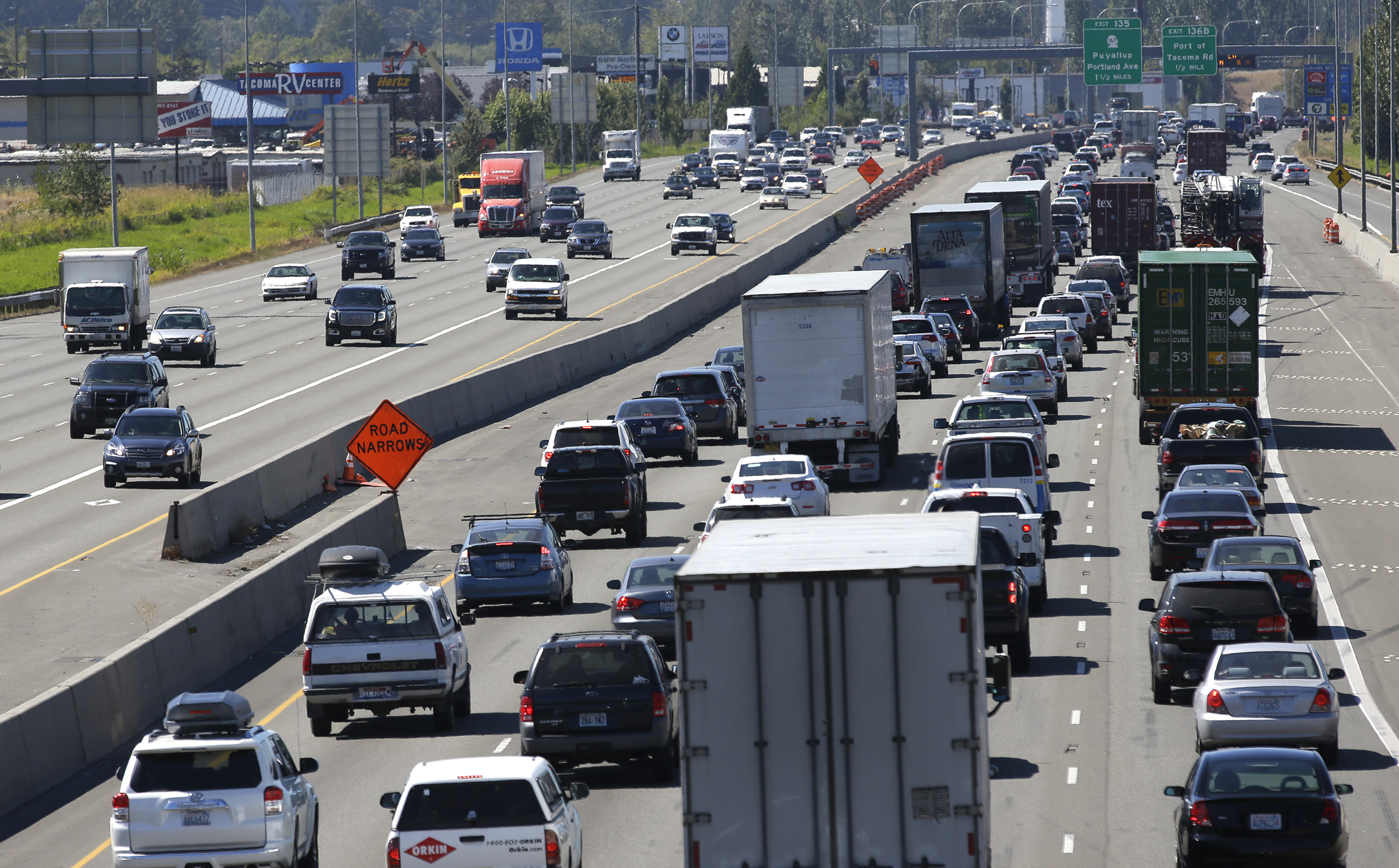 In this Aug. 24, 2016, photo, truck and automobile traffic mix on Interstate 5, headed north through Fife.. An interchange on this part of I-5 near the Port of Tacoma is one of the transportation projects that has been temporarily placed on hold since voters approved Initiative 976 last month. (Ted S. Warren/AP)

Court rulings have temporarily halted Initiative 976, the measure Washington voters approved last month to slash what they pay in car-tab fees. Yet many state and local officials are proceeding as if the initiative went into effect as scheduled on Thursday.

For state transportation leaders, that has meant delaying more than 70 highway and transit projects that have yet to break ground, as well as looking at ways to cut more than $450 million from the state’s transportation budget next year.

“I don’t see that we have any other choice,” said House Majority Leader Pat Sullivan, D-Covington. “If we just assume the court is going to overturn the initiative and it doesn’t happen, we’ll find ourselves in a bigger hole.”

Similarly, some local officials plan to set aside the money they collect from annual vehicle licensing fees, choosing not to spend it for now. That’s because they might later have to refund the money to taxpayers, if I-976 survives the ongoing legal challenge.

“We will collect the dollars if they are coming in, but we are not going to spend them,” said Kurtis Kingsolver, public works director of the city of Tacoma. “Those aren’t ours to spend right now.”  Tacoma collects about $2.9 million per year in car-tab fees that would be eliminated under I-976.

The initiative, designed to reduce annual vehicle registration fees to a flat $30, won about 53% of the statewide vote Nov. 5.  But the measure’s ultimate fate is uncertain, as opponents continue to argue that it is unconstitutional. That legal fight likely will last months and end up before the state Supreme Court.

Had a King County judge not intervened last month, most of I-976 would have taken effect this week. On Wednesday, the state Supreme Court denied a request from the state Attorney General’s office to overturn the lower-court judge’s decision, meaning the measure remains on hold for now, as the case plays out in court.

The city of Seattle, King County and the Garfield County Transportation Authority are part of the coalition arguing that I-976 doesn’t pass constitutional muster, in part because they say the ballot title was deceptive and misled voters.

If the courts uphold the initiative, it is projected to reduce revenue for transit and transportation projects in Washington state by about $4 billion over the next six years. Those cuts would affect the state budget, as well as Sound Transit and about 60 cities that collect local car-tab fees to pay for road maintenance and other needs.

State Rep. Jake Fey, a Tacoma Democrat who chairs the House Transportation Committee, said state officials will most likely continue to collect car-tab fees as the courts have allowed, but set the money aside in an escrow account of some sort.

That would force legislators to trim hundreds of millions from the state budget in the short term, Fey said. That could further delay planned highway projects, or perhaps cut ferry service and limit ferry routes, he said.

Fey said passing new taxes to stave off transportation cuts isn’t a realistic option in the upcoming 60-day legislative session, which is set to begin Jan. 13. In the past, agreeing on a package of gas-tax increases, tolls, and other measures to pay for roads and transit has required years of negotiation, he said.

Legislators also will want to avoid raising taxes in an election year, said state Sen. Steve Hobbs, a Democrat from Lake Stevens who chairs the Senate Transportation Committee. All 98 members of the state House and about half of the 49-member Senate are up for reelection in November 2020.

That leaves legislators looking mainly at cuts — even though both chambers are controlled by Democratic majorities that have shown willingness to raise taxes in the past.

State Rep. Andrew Barkis, the ranking Republican on the House Transportation Committee, said he thinks lawmakers should find ways to make the transportation system more efficient, particularly when it comes to ferry operations. “I think it is a really good thing for those agencies to take a hard look at where these dollars are going,” Barkis, R-Olympia, said Thursday.

Fey said he plans to come back in 2021 with a proposal for a new gas-tax package that could get some of the delayed projects back on track, as well as pay for other transportation needs, such as a new crossing on Interstate 5 over the Columbia River and about $3 billion to replace culverts that are blocking fish passageways.

By that point, the state will also have more certainty about I-976, Fey said. Until the courts rule on the constitutionality of the initiative, lawmakers don’t know whether they have to replace one year’s worth of lost revenue or several, meaning they won’t know how big of a tax package would even be needed to offset any cuts, he said.

In Tacoma, that means halting about 80 blocks of residential paving and road maintenance projects planned for next year, as well as possibly laying off two to three city staffers, said Kingsolver, the city’s public works director.

Everett officials are also planning for cuts in the near-term, which will mean modifying the city’s 2020 budget, said city spokesperson Kimberley Cline.

In Orting, a Pierce County city with about 8,500 residents, Mayor Josh Penner said he plans to propose not collecting the city’s $20 car-tab fee at all, to respect the will of voters who supported I-976.

If the Orting City Council opts to keep collecting the fees, however, Penner said the city will set aside that money — about $135,000 per year — and not use it to pay for planned street repairs and repaving.

That approach contrasts with one taken by officials in Seattle, where the City Council recently approved a budget that doesn’t address the possible effects of I-976.

Pat Johnson, the mayor of Buckley, said her city of about 5,000 people can’t afford to take that risk. The city, in east Pierce County, brings in about $104,000 annually from its $20 license-tab fee, which will go away if I-976 goes into effect.

“We count every penny — you have to,” Johnson said Thursday.

Buckley officials will not spend the car-tab fees they collect going forward, until the court case is decided, she said.

“Hopefully, they settle this thing quickly,” Johnson said, “because we’re all out there in limbo.”