The tech giant had its eyes on winning all seven races. Instead, it won just two. 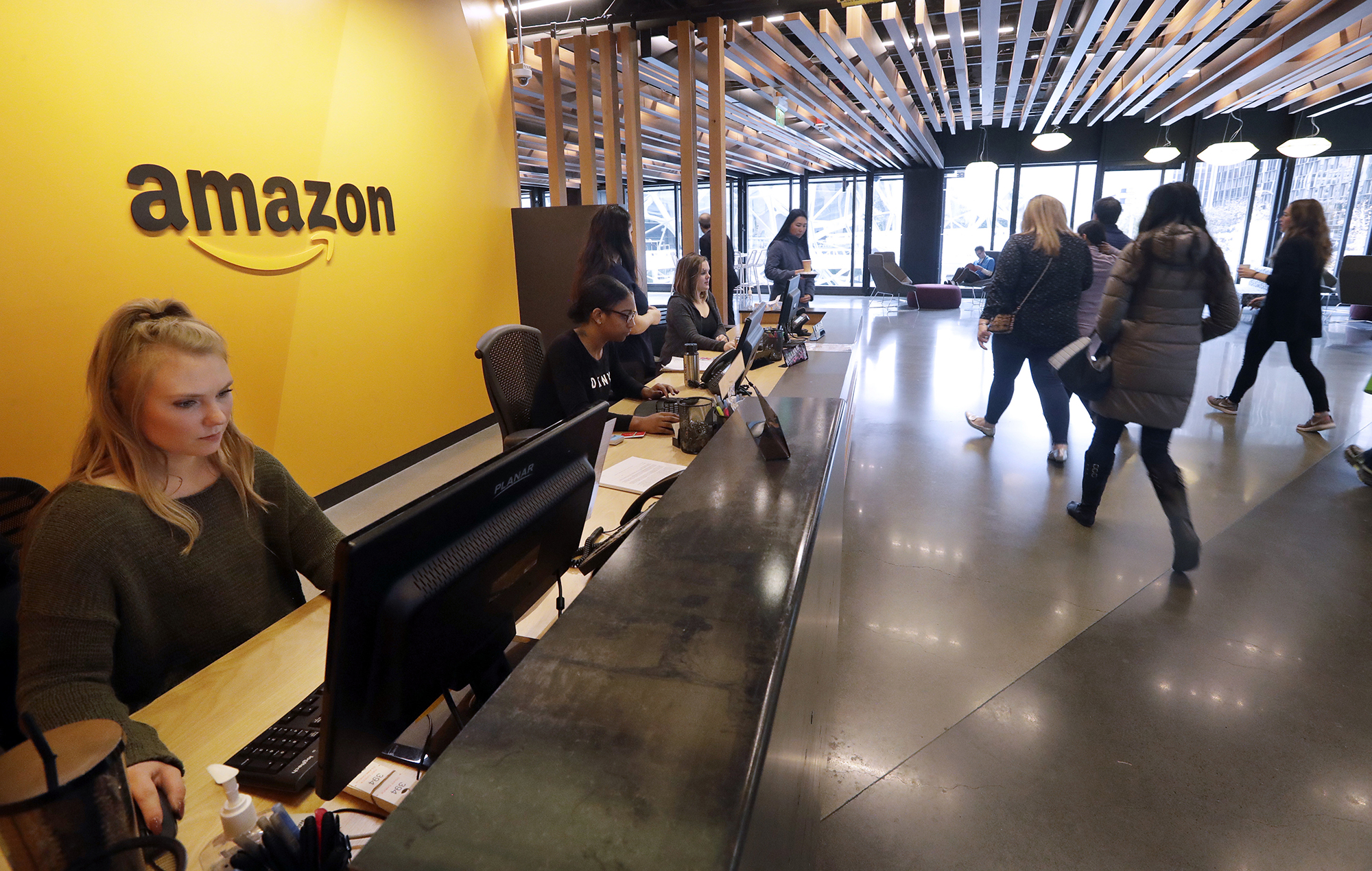 Employees walk through a lobby at Amazon's headquarters in Seattle on Nov. 13, 2018. (Elaine Thompson/AP)

Amazon first started hinting at an addition to its government affairs team last spring, about six months before voters would weigh in on seven races that could remake the Seattle City Council. For Amazon, this election held particular importance. The e-commerce giant had jumped headfirst into the 2018 fight over a business tax and, with the gates on its political advocacy flung open, it saw an opportunity to overhaul what the business community viewed as an increasingly hostile city council.

But when the new hire turned out to be Guy Palumbo, then a freshman in the Washington state Senate, the pick raised eyebrows. In a town teeming with consultants and strategists, Palumbo had limited experience in the political sphere, successfully winning just one campaign — his own in 2016. His name was known, of course, but in an industry of close connections, few knew him well.

The election last month would end in disaster for Amazon and the well-heeled coalition of businesses and mainstream Democrats seeking a more moderate council. Of the coalition's seven picks for the open seats, just two were elected — one of whom, incumbent Debora Juarez, was also supported by labor and the city’s more progressive factions.

As the city’s business interests now lick their wounds, blame has turned to Amazon’s late dump of $1 million into the political action committee affiliated with the Seattle Metropolitan Chamber of Commerce, a decision that was viewed as divorced from data and based in an overly optimistic hope that Amazon had a chance to sweep all seven races — including in districts 1 and 2, which others in the business community had written off.

Contrary to the company’s reputation for efficiency, the megacorporation’s political affairs team already had shown a propensity to shoot from the hip and act unpredictably. The late-stage cash infusion bolstered that image. Palumbo, in particular, now finds himself shouldering much of the blame for pushing the enormous infusion of money.

“That investment of a million dollars does not live up to the reputation that Amazon has of being very strategic, very focused, very data driven,” said one person close to the political process.

The following is the story of how that decision was made and received, based on the accounts of 10 people from Seattle’s business and mainstream Democrat community. All requested anonymity to speak openly about the process leading up to the donation and its impacts, citing concerns that revealing their identities would strain working relationships. Each detail of the story has been independently verified with multiple sources.

Before Palumbo’s April hiring, Amazon already had a point person who was well connected with Seattle’s business community and mainstream Democrats: Eileen Sullivan, with whom the influential Seattle Metropolitan Chamber of Commerce felt comfortable working. Sullivan, Amazon's senior manager of public policy, has decades of government affairs experience, both as an adviser to Govs. Mike Lowry and Gary Locke and in the private sector.

But Palumbo — a moderate Democrat who is close with Andy Jassy, CEO of Amazon Web Services — was brought in at a new level and apparently with more authority over the Seattle races than Sullivan. Sullivan began telling people that she would not be very involved this year, which those who spoke with her interpreted as her being sidelined, adding to an uncertainty that already surrounded Amazon’s political strategy.

By all accounts, Amazon had momentum entering the summer. It had won its first foray into Seattle politics, pressuring the city council into repealing the business tax after the council initially agreed to a compromise proposal. And polling indicated the electorate was seeking change.

But despite the company’s early political success, it appeared to be acting as though it was losing. The fact that the business tax was proposed at all was seen as a failure, despite its eventual repeal. Company representatives were particularly galled when Councilmembers Lisa Herbold and Teresa Mosqueda flew to New York City last January to advise activists on ways to push back on Amazon’s influence in a city.

“They have an idea of themselves that is not shared, and they seem shocked when people don’t agree with them,” said one person who has worked with the company. “They just assume everyone thinks the way they do about Amazon.”

That same data was being shared openly with Amazon.

But come September, Palumbo began asking the chamber’s PAC for paths to winning in districts 1 and 2 — a push to “expand the map.”

Further analysis seemed to confirm the two districts as a stretch, at best; the chamber labeled each as “solid” against the chamber-backed candidates. However, private polling at the time showed District 1, represented by Councilmember Lisa Herbold, narrowing. District 2 also looked closer than the primary results suggested it would be. That seemed to tempt Palumbo, who began pushing Amazon to invest more in both districts.

Amazon went dark for a number of weeks. The expectation was that the company might write a check in the hundreds of thousands of dollars. At one point, people began hearing a range between $300,000 at the low end and $700,000 at the high end.

At Amazon, Palumbo was pitching something bigger: an additional $1 million to be spent on the city council races, bringing the company's total up to nearly $1.5 million. This was not an amount anyone had asked for outside of Amazon. In fact, at one point, an option was for Amazon to spend slightly less on the council races and more on defeating Initiative 976, which would cut the cost of car tabs to $30 and upend transportation budgets across the state. The no on I-976 campaign had asked Amazon to contribute $750,000. But the company gave $500,000 against 976, less than the $650,000 from Microsoft, while Palumbo received approval for the $1-million spend on the city council.

Few people got advance notice of the massive check. Three or four days before its release, rumors began to trickle out that the company would come in more heavily. But it wasn’t until the night before the donation that Palumbo began calling people, giving them a heads-up. The word: We’re taking the low-range and high-range dollar amounts we gave you and adding them together.

Within Amazon, those not closely involved in the money’s approval felt blindsided and reticent.

The news was met with a fear that it could change the narrative of the race. At the same time, however, members of the business community expected it might eat up just a week’s worth of news.

The day after the donation came through, the chamber’s PAC bought over $100,000 in television ads — its first television purchase of the cycle — to support their District 1 candidate Philip Tavel alone. It also spent an additional $46,000 on direct mail over the following week. The PAC spent less heavily in District 2, but still dropped about $30,000 in favor of its candidate, Mark Solomon. The purchases came even as the People for Seattle PAC — which supported the same candidates — had stopped giving in both races.

The effect of the donation was immediate, with stories in national as well as local outlets. Sens. Bernie Sanders and Elizabeth Warren weighed in. The coverage poured gasoline on the narrative being pushed by left-leaning candidates, like Councilmember Kshama Sawant, of big-money interests drowning out working people.

In the chamber’s tracking polls, support for the candidates plummeted after they were tied directly to the Amazon donation. Even District 4's Alex Pedersen, once considered a shoo-in, looked to be in a tight race. Particularly ominous: Voter awareness of the Amazon money was through the roof.

In the end, even its “likely” candidate won by the narrowest margin among all seven races. It lost its “leaning” races and was blown out in the rest.

Other businesses in the city have long pushed Amazon to play more heavily in local politics, commensurate with its size. But now that it has done so, it’s shouldering the blame for the losses.

“Amazon is still kind of figuring out how to be who they want to be,” said one person involved in city politics. “They’re very adolescent. It’s not just Guy; it’s their entire public affairs, public relations teams are sometimes kind of pulled and pushed in certain directions.”

For all the attention paid to the contributions of Amazon, the chamber’s PAC ended the election with nearly $200,000 in cash on hand, even after the debts it owed. As it turned out, it didn't even spend all the money Amazon had given it.

For some, the election spend is especially mind-boggling considering the company’s struggles in New York, where it pulled out of plans to establish an additional headquarters after local pushback.

Said one person: “They went into New York without having learned anything from Seattle and back to Seattle without learning anything from New York.”

Looking forward to 2020, there appears to be a lot of uncertainty around Amazon’s government affairs operation. The company has clammed up about the 2019 election and offered few clues about who’s leading local government affairs going forward. And with a council that’s more willing to revive conversations about taxation, possibly on companies like Amazon, and two prominent presidential candidates regularly calling out the company, it could be an unfriendly year in politics, both locally and nationally, for Seattle’s megacorporation.