The Bellevue woman, who works at Microsoft, was held by U.S. Border Patrol with dozens of others. 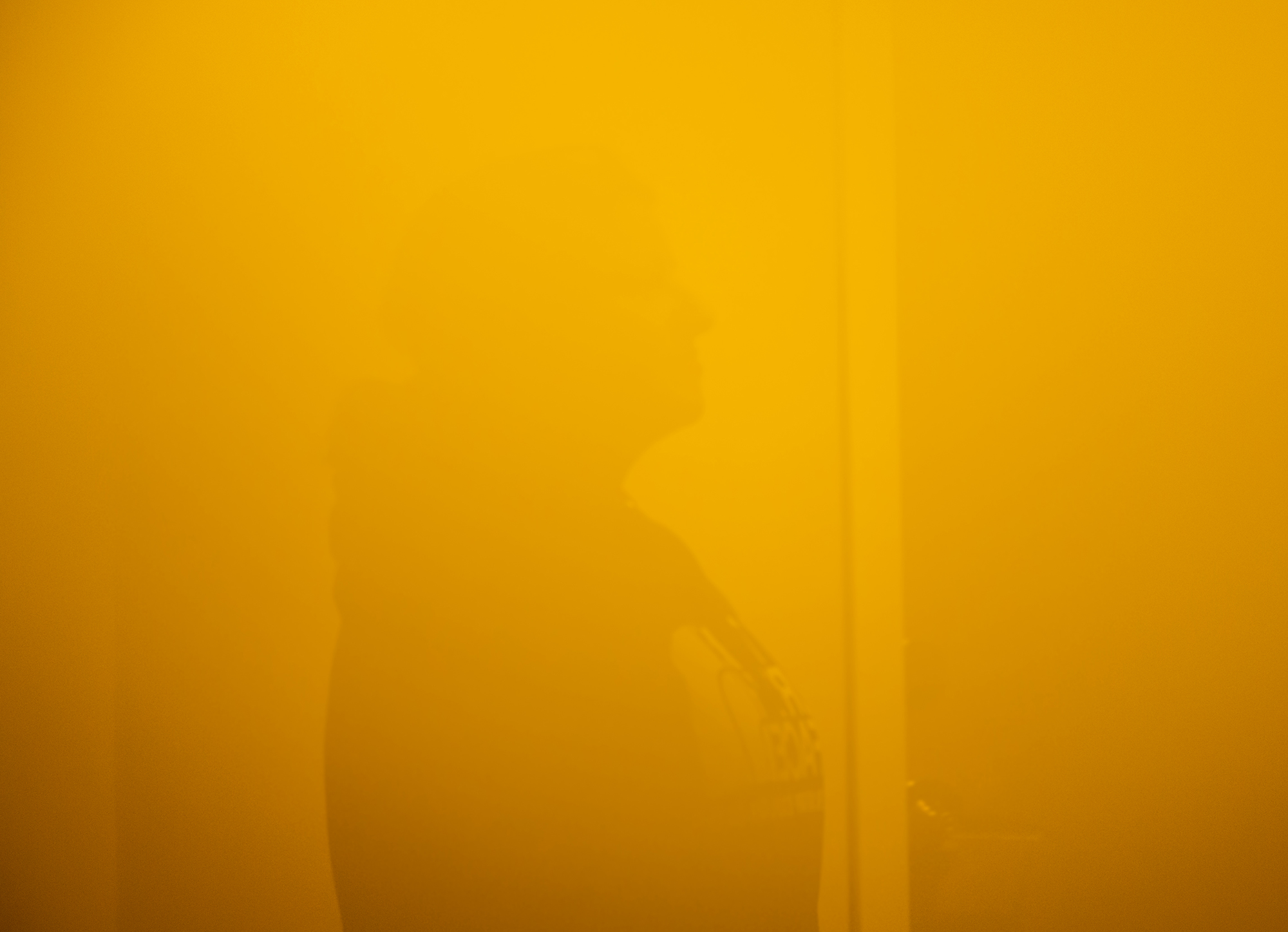 An Iranian-born woman in her 30s with Canadian citizenship says she was detained for 11 hours on Saturday at the Canadian border as she tried to return to the U.S., where she holds a green card and works for Microsoft. Seen reflected in frosted glass, photographed in Bellevue on Monday, January 6, 2020.
(Lindsey Wasson for Crosscut)

The Iranian Canadian woman didn’t start scribbling notes about what was happening at the border crossing until close to midnight.

It had all begun when the 30-something and U.S. green card holder had offered to drive her mother back to Vancouver, B.C., after the holidays.

By Saturday, she and her partner, both of whom asked not to be named for this story, had started making their way back to the U.S. She hoped to be back in Bellevue by Monday for her job as a software engineer at Microsoft.

But when the two women arrived at the U.S.-Canada border in Blaine, Washington, an officer handed them an orange paper with the words “multiple inspection referral” written on it. That was approximately 5 p.m. They would not be free to go for 11 hours.

She said they spent those hours in a nondescript room with benches, one dirty bathroom and dozens of other people who were either Iranian born or were with someone originally from the Middle Eastern country whose leader — Maj. Gen. Qassim Suleimani — the U.S. had just killed.

The country’s supreme leader, Ayatollah Ali Khamenei, had promised retaliation for Suleimani’s killing, which the Trump administration ordered after a rocket attack on an Iraqi military base, believed to have been carried out by an Iran-backed militia, killed an American contractor. Pro-Iranian demonstrators also broke into the compound of the U.S. embassy in Baghdad last month.

At the border crossing, those already in the building warned the couple that they had better make themselves comfortable. They were going to be there for a while.

The Bellevue woman couldn’t make sense of what was happening. Maybe the others stuck there had only visas, she thought. But as she began chatting with people, she realized many of those in the room were U.S. citizens.

“Maybe it’s related to that guy they killed,” her partner suggested.

“That guy?” she asked in disbelief.

“I didn’t know who he was. I didn’t know anything about him because I don’t follow Iranian news,” she explained, noting that although she had been born in Iran, she had grown up in Dubai and attended university in Vancouver.

Only two U.S. Border Patrol officers were working with those of Middle Eastern descent, she said. She described how one person yelled —"Don’t worry! You aren’t Persian!” — when a young, white kid walked in looking panicked after seeing dozens of people in the room. Inevitably anyone not born in Iran would be let go, she said. Even others from the Middle East who were questioned, such as Palestinians, were allowed to leave sooner, she said.

As some in the room grew hungry, pizza was ordered from a nearby restaurant before it closed at 9 p.m. She and her partner ordered an extra large so they could share with others.

Then approximately three hours after the couple had arrived, an officer finally pulled the Bellevue woman aside for an interview. Did her father serve in the military? Had she ever handled a gun?

She admitted she had twice experimented at a gun range. She and her girlfriends had wanted to give it a try, and ladies got half off on Tuesdays.

“I didn’t want to lie,” she explained. Still, the interview lasted all of 10 minutes. The officer, she said, was nice.

Then she and her partner waited for approximately another eight hours.

They met all sorts of people during their time there.

There was the guy from White Rock, British Columbia, who liked to cross the border to fill up gas. He had planned to head to Harrison Hot Springs for his 20th wedding anniversary, but was forced to cancel his hotel reservation.

Another man with a Filipino wife and two toddlers told her: “My wife wanted to try this Filipino restaurant and that’s why we crossed the border. We shouldn’t have done that. She doesn’t read the news!”

“Everyone was trying to blame their partner for what was happening and not seeing the whole picture that this whole thing was really wrong,” the Bellevue woman said.

She admitted at one point that she herself had tried to place the blame on her mom, reasoning she should have bought her mom a bus or train ticket home. Her partner asked her why she would ever say that about her own mother.

Feeling ashamed about what was happening, a man with an American wife and child eventually tried to persuade the officers to at least let his non-Iranian family members return to Canada, but had no luck, she said. He had left Iran when he was 16 and appeared to be in his 50s or 60s.

By the time midnight rolled around, people were hungry again, and Border Patrol ordered about a dozen pizzas from Domino’s.

“I don’t know, maybe they were trying this Stockholm syndrome thing that you would feel bad for the people who were keeping you hostage and holding your passports,” she joked.

She said she felt the worst for the children stuck there, some of whom expressed concerns about speaking Farsi.

“What’s wrong with my language?... We are what we are because of the diversity we have. That’s the problem with Iran. Iran doesn’t have that many immigrants,” she said. “People are so close minded in Iran because they don’t see immigrants. They don’t grow because they don’t have people from outside bringing ideas.”

She also felt badly for an older couple who had been there since early morning. The woman had worn a head scarf but had eventually taken it off in an attempt to appease the officers and, perhaps, be released sooner.

“I felt terrible for the woman,” she said in tears. “I’m not a religious person at all, but I believe in the freedom that people should be able to have any religion or belief.

“If we wanted to be shut down like that we would have stayed in Iran.”

In the midst of it all, there was talk of contacting political representatives, including Washington state Attorney General Bob Ferguson.

And for the last 45 minutes, because the officers allowed some to return to their vehicles to grab food or belongings, she tried to sleep in her car. Then at approximately 5 a.m., they were told they were free to go.

After making it to work on Monday, she says she was motivated to talk to the press about her experience in part because of the Border Patrol’s denials about people being held.

When asked about what some estimate were approximately 60 to 200 Iranian Americans held at the border over the weekend, a U.S. Customs and Border Protection spokesperson said in a statement: “Social media posts that CBP is detaining Iranian-Americans and refusing their entry into the U.S. because of their country of origin are false. Reports that DHS [U.S. Department of Homeland Security]/CBP has issued a related directive are also false.”

Border Patrol claimed it was short staffed and that there had been a rush of people because of the holidays.

“That was an absolute lie,” the Bellevue woman said from her apartment complex, looking tired but comfortable in a North Face hoodie, pink lipstick and ponytail.

She said she had been excited at the prospect of becoming a U.S. citizen. She’s already applied and was looking forward to voting. But now she wonders about seeing her mother in Canada and other family, including her sister, who is due to give birth in two weeks.

“This shouldn’t become a normal thing,” she warned. “In every country you have people who are not OK with immigrants, who don’t like minorities. It’s not something that is specific to Iran or here or some other place. But the laws are what protect you.”

She said she became truly frightened when she realized there was no law preventing her and others from being mistreated at the border.

“We were desperate trying to make sense of it,” she said.

Her partner, who was raised in Iran but born in Europe, was never questioned.