Lawmakers are going paperless in Olympia, but it’s not really about saving trees

Confusion over the Public Records Act has Washington lawmakers adopting new practices that may or may not have anything to do with the actual law. 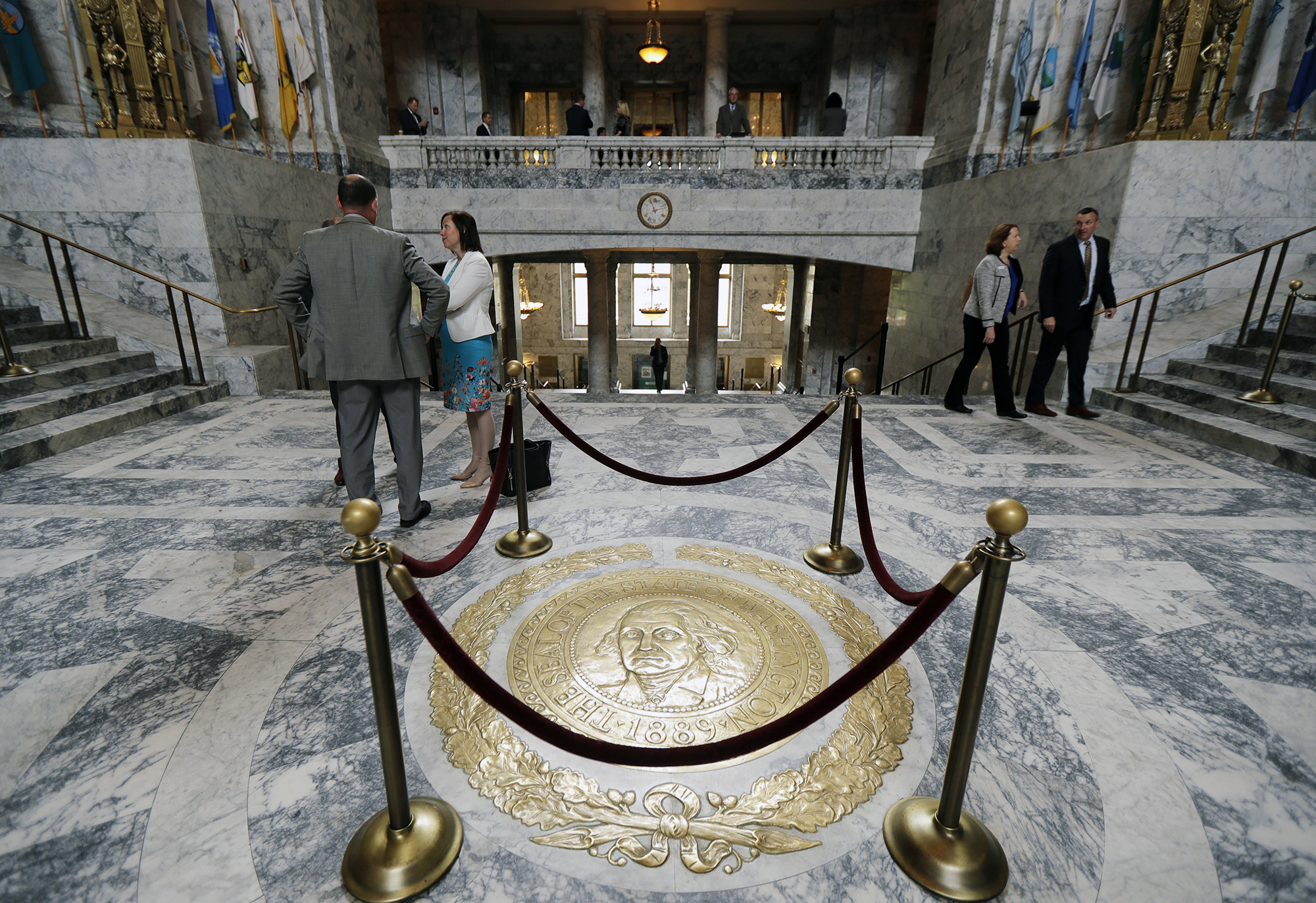 The Washington state seal is protected by ropes in the rotunda of the Legislative Building in Olympia, April 22, 2019. (Ted S. Warren/AP)

If you wander around the Washington state Capitol this year, you’ll see fresh messages posted outside many legislators’ offices.

“No paper, please,” read some of the new flyers.

“We are going paperless!” proclaim others.

The key reason isn’t environmental (though some lawmakers say that’s a factor, too).

Rather, the shift is mainly a result of a recent Washington Supreme Court ruling that state legislators must comply with the state’s Public Records Act.

The Dec. 19 court decision confirmed that state lawmakers must follow the same government transparency rules as most other government officials.

That means legislators must keep records of the work they do on the public’s behalf, including who they meet with and what information they exchange while crafting state laws.

The public disclosure statute says nothing about government officials being unable to accept paper documents. Yet in response to last month’s ruling, many legislators are refusing to accept paper from visitors, mainly to reduce their responsibility to physically keep track of it.

The paper-free policies being instituted at the Capitol are only one manifestation of lawmakers’ confusion when it comes to following the Public Records Act, which voters initially approved at the ballot box in 1972.

While city council members and state agency employees are accustomed to archiving documents and responding to public records requests as part of their job, state lawmakers had long insisted that the same rules didn’t apply to them.

Now that the state Supreme Court has officially told them they are wrong, they’re scrambling — and, in some cases, don’t know what to do.

House Speaker Laurie Jinkins, D-Tacoma, said “the place is struggling to figure out how to move forward” when it comes to appropriately handling public records.

“The one thing I can really guarantee you is that we’re going to make more mistakes,” she told reporters Tuesday.

Some missteps have already occurred. Last week, a House public-records officer initially rejected an Associated Press reporter’s request for the investigation into former state Rep. Jeff Morris, who resigned this month. Because Morris is no longer a member of the Legislature, the staffer said, his office ceased to exist and there were no responsive records.

After the reporter objected, the same public-records officer sent a letter reversing that decision, saying the first letter contained “both factual errors and speculation on legal issues not presented” by the reporter’s requests.

Now, in refusing to accept paper documents, many legislators say their goal is simply to stay on the right side of the law.

At this point, neither the state House nor Senate has instituted an official policy saying legislators can’t accept paper, according to both the House chief clerk and Senate secretary. Both chambers are still working to create formal rules that will clarify which documents lawmakers must keep and for how long — a process likely to take several more months.

In the meantime, many lawmakers have chosen to go paperless — such as accepting documents only by email instead of in-person from people who visit their offices — to help ensure they aren’t falling down on their duty to properly archive and maintain hard copies.

“Our office is striving to ensure strict compliance with the Public Records Act,” reads a placard outside the office of state Rep. Laurie Dolan, D-Olympia. “Therefore, we are not accepting any paper handouts, legislative agendas, or invitations.”

The impulse is bipartisan. “In order to comply with the public records act (PRA) retention regulations, we are no longer accepting paper,” reads a note outside the office of state Sen. Sharon Brown, R-Kennewick.

Many lawmakers are also refusing to accept handwritten notes, which traditionally have been used to pass messages to lawmakers during floor sessions and committee meetings.

“Things that we would have thrown in the garbage or in the recycling on our way out of a committee room we now understand are public records that we have to preserve,” said state Sen. Jamie Pedersen, D-Seattle, one of the lawmakers who has been discouraging people from sending him notes in committee and on the Senate floor.

He said he has taken a few notes sent to him in committee meetings and had his assistant scan them, but has told people he is no longer accepting paper notes during floor sessions.

“I don’t want to have to be responsible for keeping notes that some random person decides to send me,” Pedersen said. “There aren’t enough hours in the day for me to have to track all of that and scan it. ... We have email if people want to communicate with me.”

In his other role as a member of the Kirkland City Council, Nixon said he frequently accepts paper versions of documents and has his assistant scan them so they can be easily searched electronically.

“It’s very easy to do with modern scanning equipment,” Nixon said. He can then can keep the original and shred it later, he said, with no need to refuse the document outright.

“I have never heard of an agency saying, ‘No, don’t give me anything, because I would have to archive it,’ ” said Nixon, who used to be a Republican state legislator.

For some visitors to the Capitol, the restrictions on paper have taken them by surprise. On Tuesday, a group representing conservation districts wanted to leave a few pages summarizing their key talking points at the office of state Sen. Reuven Carlyle, D-Seattle, who chairs the Senate Environment, Energy and Technology Committee.

Carlyle’s legislative assistant wouldn’t accept a paper version of the documents, but agreed to scan them to create an electronic version when asked.

Afterward, however, Jennifer Boie, the director of the Palouse Conservation District, questioned whether sending a scanned copy or email version would have the same impact as putting a piece of paper in a lawmaker’s hand.

“In today’s digital age, things just come and go so quickly,” Boie said. “... If I give someone a hard copy, it is more likely to get looked at.”

Some, including Nixon, also worry that constituents may feel disrespected when they travel to Olympia and are unable to hand their lawmakers a summary of their concerns when they meet face to face.

“Folks come to Olympia and have brought a message for their legislator, and they do want to leave it behind,” said Candice Bock, a lobbyist for the Association of Washington Cities.

Especially for people who may not come to Olympia often, “I don’t want them frustrated by the process,” Bock said.

There’s also the issue of ensuring that everyone has access to government — even those who don’t use email, said Kathy Sakahara, a citizen lobbyist with the League of Women Voters of Washington.

“I have the privilege of emailing legislators, because I have access to email, a scanner and the internet at home,” Sakahara said. “For someone who doesn’t have those things, they still need to be able to communicate with their legislators.”

House Minority Leader J.T. Wilcox, R-Yelm, said he heard secondhand that some visitors to the Capitol “felt disrespected” by legislators refusing paper handouts, “and that’s the last thing we want.”

“The institution is going to have to figure this out,” Wilcox said Wednesday. “Without a doubt, it is going to be more expensive — but every other agency has to do this, and so will we.”

For her part, Jinkins, the House speaker, said she is responding to last month’s court ruling by putting every piece of paper she receives in a box, until new rules are formulated and she knows what she can keep and what can be thrown out.

Wilcox said he, too, is retaining all paper until a formal retention schedule for legislative documents can be finalized.

For now, lawmakers and legislative staff are in the process of receiving more training on the Public Records Act.

The next training session is scheduled for Monday.

This article has been corrected to reflect the correct spelling of state Sen. Jamie Pedersen's first name.