There are sensible solutions to neighborhood safety. Racist surveillance isn't one.

In December, we learned that Magnolia residents banded together with some neighbors to install a video surveillance system in the neighborhood. The video system, provided by Flock Safety, uses artificial intelligence to record the make, model, color and license plate numbers of any vehicle that passes under its cameras. It uses this information to identify individual vehicles and then tracks the number of times that vehicle enters and leaves the neighborhood. That information is then stored in a searchable database, which residents are free to use to compile a list of who does and doesn’t belong in the neighborhood, much like the Citizens’ Councils of not so old.

The given reason for the surveillance cameras? Porch package theft.

In a 2016 public safety survey, Magnolia was listed as one of several wealthy, mostly white neighborhoods where fear of crime is disproportionate to the actual rates of crime. Much like the “emphasis patrols” unleashed by the Durkan Administration last summer, the contract with Flock Safety is the same kind of dubiously effective, expensive window dressing that makes white people feel safer in their already-safe neighborhoods.

In fact, this contract may have the exact opposite effect: a searchable, easily abused, likely hackable A.I.-powered video archive makes Magnolia a much more dangerous place to live for me and my family.

Technology itself may be bias-free, but users and developers are decidedly not. It is not difficult to imagine the kinds of people that white Magnolia residents are going to report as suspicious. Residents are more likely to report people like my father, a Black man, than any actual threat to the neighborhood. Users on community reporting apps like Nextdoor and Neighbors by Ring (owned by Amazon) frequently reference “suspicious activity” that turns out to just be … Black people. White people may take some comfort in the idea of a digital “neighborhood watch”; Black America most certainly does not.

There’s no reason to believe that Magnolia is immune to the kind of racism that fuels these disproportionate suspicious activity alerts. The neighborhood, like the city, is still haunted by the racist legacy of redlining. We know that neither the ZIP code we live in, nor the year on the calendar protects us from racism. Skin color is used as a quick sorting guide for who does and doesn’t belong in a given neighborhood. When I was a first grader at nearby Lawton Elementary, an older white child told me that my body was illegal because I’m mixed race. We’ve been living at our current address for 23 years and still my father is frequently assumed to be a gardener or housekeeper. His girlfriend of more than a decade is assumed to be an interloper; hostile notes left on her car when she comes to visit confirm this.

Several years ago, my father called the nonemergency police line to report what looked like a burglary in progress at the house of a neighbor we knew to be on vacation. He spoke to the operator to report two men engaging in suspicious behavior. “Two men,'' my father said. “Yes,” the operator responded, “two Black men?”

When these cameras and systems are marketed to be “community watch” or “neighborhood watch” tools, it should give us pause. This type of surveillance system enables Permit Pattys and BBQ Beckys and, yes, AI Andrews to report their neighbors by license plate and photo to a police department still under a consent decree for its disproportionate use of force against people of color. Because this footage comes from a private contract and not a public one, these same police potentially have unregulated access to this footage. Emails from a community-policing team officer, surfaced in the Seattle Times, suggested that the Seattle Police Department is only interested in footage when submitted along with a suspicious activity report — but this is cold comfort when all it takes to be viewed as “suspicious” is being a brown face in a white space.

According to The Seattle Times, Andrews had another reason for installing the surveillance system: seeing an individual walking around the neighborhood who appeared to be “high as a kite.” I have to wonder about that. People with mental illnesses and disabilities are frequently the targets of unwarranted 911 calls that lead to unneeded institutionalization or death — often because the caller and the police weren’t familiar with a body that moved or behaved differently. Just recently, police in Los Angeles responded to a call about a Black woman causing a “disturbance” at a Department of Motor Vehicles location, only to arrive to find out that there wasn’t a disturbance at all: She was deaf, and the staff interpreted her use of American Sign Language and frustration upon not receiving interpretation services at a government facility as unhinged hostility.

This disabled Black body in Magnolia isn’t a hypothetical — it is my sister’s body, and the bodies of many of our friends. Andrews’ disproportionate fear of crime in the neighborhood, along with the installation of these cameras, places my family at a higher risk of experiencing a fatal police interaction.

I should be clear: package theft and car break-ins are annoying and can be incredibly scary. There are few things more disconcerting than knowing that a stranger with ill intentions was standing on your doorstep. Theft of personal property is violating and becomes more and more catastrophic the lower someone falls on the income ladder.

But let me be even clearer: There is no property on this Earth that is worth more than the life and safety of another human being. This camera system puts people’s lives and safety at risk, and needs to be removed from the community. Of course, people must be held responsible for their actions, be it burglary or vandalism or otherwise. But at the same time, our communities need to be in the business of creating systems of accountability and justice — not systems of racist surveillance or retribution.

There are many deterrents to package theft that don’t involve violations of privacy or increase the chances that my family experiences a fatal encounter with police. Look into additional insurance options or have your Amazon orders delivered to one of the many secure pickup locations throughout the city. Motion-sensitive floodlights, clearly posted signage from your home security system and package lockboxes for your front porch are all effective measures for deterring theft. All of these solutions help keep your personal property safe, and keep you from having to install a racist surveillance system in your neighborhood.

If you try all of that and the only thing that will give you any peace of mind is a video doorbell system, sure, fine, go ahead and install one — as long as it isn't Ring.

If you’re worried about homeless people, vote to apportion money for evidence-based, housing first programs. If you’re worried about people in your neighborhood being “high as a kite” or just mentally ill, push for comprehensive universal health care and increased spending for community navigation guides and supervised injection sites.

And if you’re worried about people of color in your neighborhood?

Mind your own damn business. 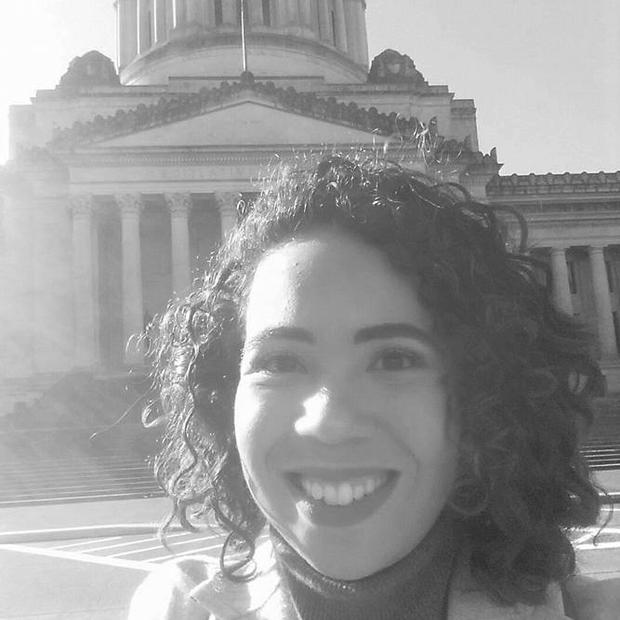 Sophia Nicholson-Keener is an activist and interfaith educator.