Officials have not filed a report since 2009 that examines the race and ethnicity of drivers who troopers stop and search. 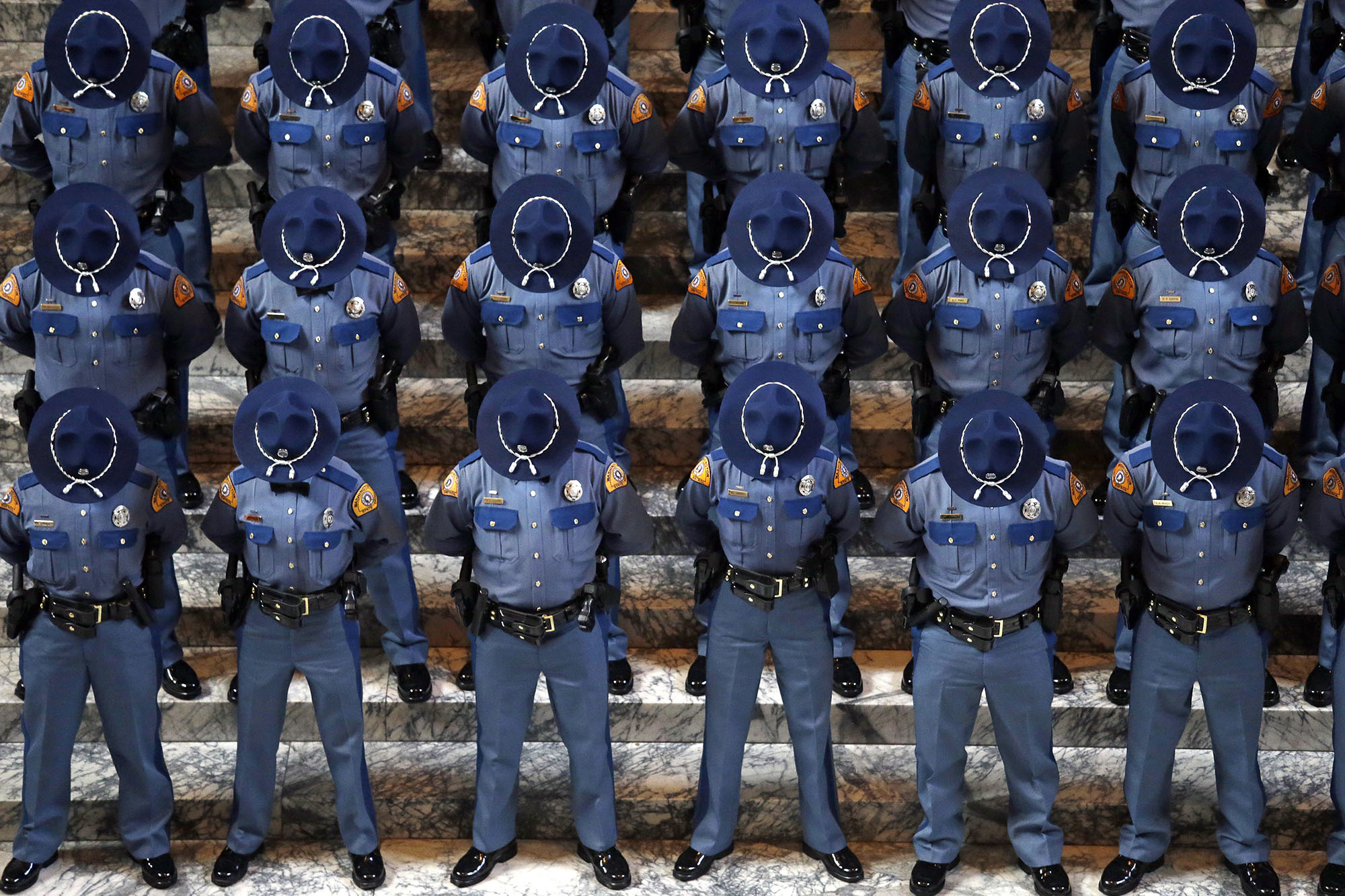 New Washington State Patrol troopers bow their heads during a prayer at the patrol's graduation ceremonies in the Capitol rotunda, April 26, 2017, in Olympia. (Elaine Thompson/AP)

In the wake of revelations that state troopers are searching people of color at a much higher rate than whites, the Washington State Patrol said it is moving forward to address the problem, and lawmakers say they’ll be looking at the issue during this year’s legislative session.

The State Patrol says it is in talks with university researchers to look into the issue; it has put some Seattle-area troopers through an anti-bias training course that is more comprehensive than what cadets receive in the training academy; and the agency has been trying for years to recruit for diversity.

In Olympia, legislators expressed outrage, if not urgency, at the findings. A number of top-ranking Democrats said they want to see improvements, but they also said they’re satisfied the State Patrol says it will address the problem.

State Rep. Gina Mosbrucker, a Goldendale Republican who in recent sessions helped pass legislation to improve Washington state’s investigations of missing and murdered Indigenous women, said she met with State Patrol officials shortly after the InvestigateWest story came out and is trying to schedule a meeting with the office of Gov. Jay Inslee as well.

One step Mosbrucker and some House Democratic leaders support is funding a new round of studies in partnership with Washington State University. In 2003, 2005 and 2007, WSU researchers raised flags after finding high search rates for Native Americans, although they couldn’t say it resulted from racial bias. One of those researchers estimated a new round of studies could be conducted for about $50,000.

Mosbrucker called the elevated search rates for Native Americans “unacceptable.” And so “I needed to figure out what the answers were and why it was happening,” she said.

“I do think it rises to a priority status in a 60-day session,” she added later.

State Patrol spokesman Chris Loftis said the agency is in talks with the university to conduct the studies again. State Patrol Chief John Batiste shared InvestigateWest’s report with the agency’s entire staff to bring awareness to the problem, and Loftis said the patrol is working to improve its diversity, enhance anti-bias training and increase public engagement. Batiste, the patrol chief since 2005, is Black.

“We want to go into a deeper dive ... to really tease out that information that might link to discretionary decisions for searches,” Loftis said. “We’re excited about that. We’ve made it clear we’re looking for real-world applicable information that will help us with training and improvement of our processes and protocols going forward.”

A number of lawmakers gave the State Patrol high marks for acknowledging the problem and promising to address it.

“I’m encouraged by the direction the State Patrol is taking after these revelations,” said Rep. Roger Goodman, chair of the House Public Safety Committee. “They’re not denying everything. They’re going to bolster training. They’re going to collect more data. I’m satisfied with their response.”

InvestigateWest’s reporting uncovered documents showing that 10 years ago the State Patrol abandoned a partnership with Washington State University that looked into racial disparities in traffic stops.

The State Patrol also didn’t comply with a legislative requirement to submit reports to the Criminal Justice Training Commission about the race and ethnicity of motorists stopped and searched.

The agency didn’t dispute the findings, but did note that the 2003-2007 WSU studies couldn’t say the disparity in search rates resulted from intentional bias.

The State Patrol has not filed a report since 2009 that examines the race and ethnicity of drivers that troopers stopped and searched. That's  despite a 2000 law that requires those reports to be done semiannually. In 2009, a State Patrol official successfully argued against continuing to produce the reports, saying it was unlikely anyone would notice. (Only two other reports had been submitted, in 2001 and 2008.) When state legislators passed a bill to reduce paperwork seven years later, the State Patrol’s reporting requirement was rescinded.

In the report, the patrol wrote that it’s putting recruits through new intercultural sensitivity testing, a 2018 addition to the application process that measures their attitudes toward other cultures; a poor performance counts against the recruit’s evaluation. Starting this year, the State Patrol will use an automated background check system that is supposed to eliminate any biases that might be exhibited by a human evaluator.

Meanwhile, the agency is continuing to recruit at colleges and high schools with large minority populations and working with an outside marketing firm “to target underrepresented groups” for recruitment, according to the report. This year, the State Patrol is providing schools with a virtual job shadowing video “ride alongs” that follow troopers and other State Patrol employees during their daily routine.

Loftis said the agency tried to feature a diverse cast in the videos and will target schools with high populations of racial and ethnic groups underrepresented in the State Patrol.

“We want to make sure minorities and women see themselves in the subjects of our videos,” he said.

Valdez criticized the State Patrol’s report for failing to address the low number of people of color in upper administrative positions.

He said the report “lacks sufficient research into what models and methods they could do throughout the state to ensure they’re reaching communities not historically recruited by the State Patrol.” Valdez said the patrol needs to better communicate with young people of color, showing “here’s why if you’re from an underrepresented community in the Yakima Valley, why it’s so important to have folks that look like them in the State Patrol ranks.”

Patrol officials said the decision to conduct the report internally came after $645,000 for a workforce diversity plan was stripped from its 2019 budget legislation. The State Patrol said the money would have been spent on having an outside, objective party examine what has and hasn’t worked for the patrol’s past recruiting methods, study what has worked for other agencies and assess whether issues beyond recruiting, such as the way the agency screens and trains recruits, are to blame for a lack of diversity.

“Having an objective set of eyes that would come to us, we would welcome that scrutiny, but that scrutiny costs money,” Loftis said.

Capt. Neil Weaver, the State Patrol’s legislative liaison, said: “I can tell you it would have definitely been a different report” had the Legislature provided the funding.

Improving diversity is important going forward, as is ensuring that troopers have training about and are familiar with the communities they’re policing, said Rep. Debra Lekanoff, D-Bow.

“The majority of your police officers in Indian Country are not people of color,” said Lekanoff, an Alaska Native who served as the governmental affairs director of the Swinomish Indian Tribal Community for more than 15 years.

Mosbrucker, the Republican legislator, said she thinks the two tribal liaison positions funded as part of her legislation to address missing and murdered Indigenous women — one position has been filled and the State Patrol says it’s in the process of hiring the other — will be able to help with issues such as complaints about bias in Indian Country.

“I think they're going to be a sounding board, and [tribal leaders] are going to have ideas they can share with this tribal liaison,” she said. “They’re going to have someone who does call them back and can work with them.”

Loftis, the State Patrol spokesman, said that in July some troopers in the Seattle area began attending an eight-hour anti-bias training session taught by Bryant T. Marks, a minister and associate professor at Morehouse College. The training, hosted by the King County Sheriff’s Office at the Criminal Justice Training Commission in Burien, is far more extensive than the one-hour “implicit bias” class cadets receive at the State Patrol’s academy.

Loftis said the State Patrol is considering expanding the training to other regions, but is waiting to see the new anti-bias curriculum the state is developing as a result of Initiative 940, which voters passed in 2018. I-940 requires police training in violence de-escalation and mental health issues. There are logistical hurdles to pulling troopers off the road to attend training sessions as well, Loftis said.

When launching additional bias training, “I’d start with the Yakama or the Colville reservations if I was them,” said Rep. Timm Ormsby, D-Spokane. But Ormsby, the House Appropriations Committee chair, who in 2016 sponsored legislation that eliminated the State Patrol’s need to report race and ethnicity data to the Criminal Justice Training Commission, also expressed satisfaction with the agency’s promise to address the issue.

“I’ve got a million questions about this,” Ormsby said, adding later: “This is about problem solving, as opposed to some fanfare.”

Rep. Tana Senn, D-Mercer Island, the primary sponsor on the paperwork reduction bill that canceled the reporting requirement, said the disparities in search rates that InvestigateWest found were “outrageous.”

“I would say looking at that today, it would probably be a different decision in including that in that piece of legislation,” Senn said of canceling the reporting requirement. But she later shared with InvestigateWest an email from Weaver, the State Patrol’s legislative liaison. In it, Weaver outlines what the agency is doing to address the disparity in its searches and says it asked Senn to eliminate the reporting requirement in 2016 because “contact with the Criminal Justice Training Commission indicated they did not do anything with the report once they received it from our agency.”

The State Patrol maintains detailed data about the racial and ethnic makeup of the people it stops. But that information is not in an easily accessible format. To conduct its analysis, InvestigateWest used traffic stop data obtained by Stanford University through a Public Records Act request and employed a statistical computing tool to examine records of 8 million traffic stops.

The reports that the State Patrol submitted to the Criminal Justice Training Commission are easier to understand, but less detailed. The final report submitted in 2009, provided by the State Patrol’s public affairs office after the agency’s open records office initially said it couldn’t find a copy, includes statistics on the ethnicity and race, age and gender of the people troopers stop, as well as the reason for stops. But it has little information about searches.

“We didn’t eliminate the importance of the data collection, and I think the question is, are we looking at the data?” Senn said. “I think the Washington State Patrol needs to be looking at that data on a regular basis, and make sure they’re adjusting their training and resources accordingly.” 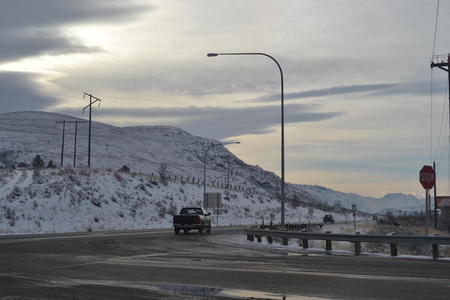 by / December 19
Article continues below