With an eye toward public safety, Seattle officials grapple with future of arrest alternatives

After weeks of back and forth, Seattle Mayor Jenny Durkan said Friday she would release funding for Seattle's lauded diversion program. 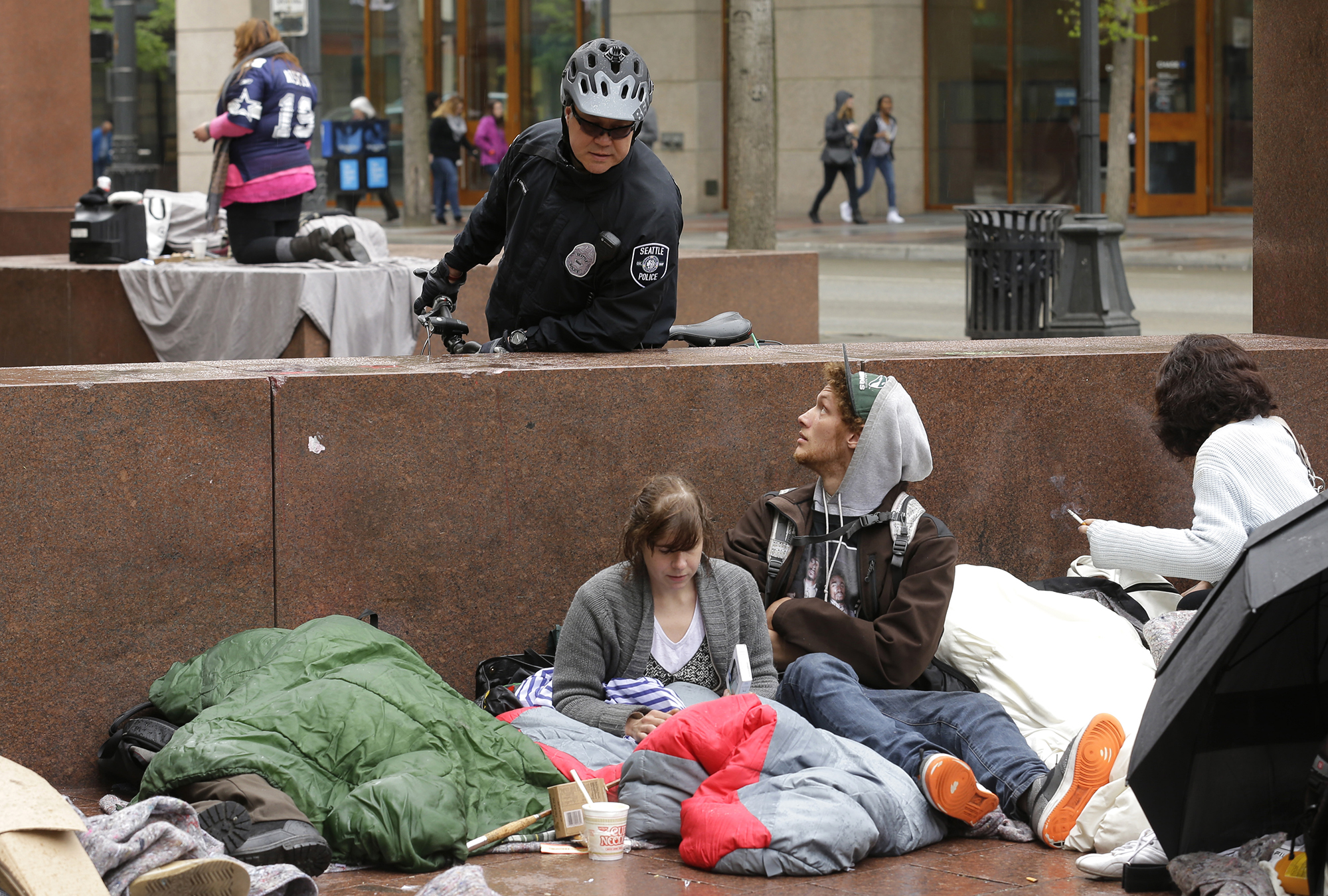 Gailen Lopton, seated second from right, talks with Seattle Police Officer Tom Christenson, top, as he hangs out in downtown Seattle, April 7, 2015. When police caught Lopton injecting heroin in a downtown alley in March, the officers offered him a chance to enroll in a first-of-its-kind program called Law Enforcement Assisted Diversion, aimed at keeping low-level drug offenders and sex workers out of jail and receiving services for housing, counseling and job training. (Ted S. Warren/AP)

Under the shadow of last month’s fatal shooting at Third Avenue and Pine Street, the Seattle City Council and Mayor Jenny Durkan have struggled to get on the same page when it comes to an alternative approach to tackling crime downtown.

The disconnect has been over funding for an internationally recognized program that focuses on alternatives to police arrests, which was appropriated by the council last fall but not released by the mayor.

After weeks of back and forth with council, the mayor's office committed Friday to releasing the full budget for the program. Resolving the question of when and how the diversion program will be funded had been “urgent,” all nine city council members said in a letter to the mayor’s office last Tuesday, “and confusion about what the City intends" was "only increasing with the passing weeks.”

But even with the promised contract, the confusion and disagreement around the program show how, despite broad momentum toward stemming persistent low-level crime, consensus on the best path forward can be harder to come by.

Durkan, a former prosecutor, has said she wants to be the mayor who finally tames parts of downtown that appear unsafe to business owners and tourists, and in recent weeks she has floated several new ideas for tackling the problem. But when it comes to the council’s preferred approach of expanding alternatives to the conventional criminal justice system, she has proceeded cautiously.

The Law Enforcement Assisted Diversion (LEAD) program began in Seattle in 2011 and brought together law enforcement and public defense attorneys to find alternatives to repeatedly arresting drug users, sex workers and other low-level offenders. Unlike other criminal justice diversion programs, LEAD works directly with the Seattle Police Department to offer case management in lieu of arrest. The program also accepts client-referrals from the community.

After LEAD saw years of modest growth, the Seattle City Council approved an additional $3.5 million for the program last fall — more than double what the city had spent the year before. With studies showing positive results, the program has appealed to the council’s progressive inclinations toward criminal justice reform, while also offering the case that it is, above all, a crime reduction program. In particular, looking at clients with outstanding warrants, one study found a nearly 60% decrease in rearrests after six months.

The new funding was intended to clear a backlog of roughly 300 cases-in-waiting, increase referrals and improve case management ratios for the program’s existing roughly 700 clients — thereby lightening the load on case managers.

But for all of 2020, Durkan has not allocated the additional budget. The mayor said the delay was necessary to ensure accountability and that the program is well-suited to Seattle's current realities. It's important to develop reporting requirement to be used for the program moving forward, representatives from Durkan's office said.

That changed Friday, after weeks of questioning from the council and LEAD representatives, when the mayor committed to releasing a contract for the full amount in the next two weeks. "As with any contract, [the Seattle Human Services Department] is working closely with LEAD to develop both the appropriate budget, reporting requirements, and performance measures for the contract," Durkan's Chief of Staff Stephanie Formas said in an email.

"LEAD, the City Council and the Mayor are united to ensure LEAD and its clients are set up for success and outcomes, especially as we use the opportunity to scale the program," she said.

In the wake of the Jan. 22 shooting at Third and Pine, Durkan has said improving public safety requires a mix of diversion, upstream focus, urban design and increased law enforcement. In her State of the City speech last week, she promised a new “community response team” to help curb retaliatory gun violence.

She did not mention LEAD by name.

Her inaction on the contract had frustrated and confused council members and angered LEAD staff, who said they were unable to plan for the future and, without proper staffing ratios, were at risk of breaking the program’s effectiveness.

"It is very challenging to have a budget that the council passed and the mayor signed into law and not have a contract," said Jesse Benet, the Deputy Director of the Public Defender Association, where LEAD is housed.

Increasing caseloads without the budget to follow has strained LEAD, Benet said, and the contract uncertainty has made planning for the future difficult. "We can’t continue on how we are right now," Benet said. "It’s breaking case managers. We’re seeing higher turnover. We’re starting to get client complaints."

Journalist Erica Barnett first reported on the delay of the contract's release.

At issue, at least in part, was a rift between how Durkan’s office and council members view the additional funding. When it allocated the money, last year’s council assumed it would go toward scaling up what the program had already been doing for nearly 10 years.

Durkan and her staff, however, are treating distribution of the dollars as if the city were creating an entirely new program — a process that can take months. The mayor’s office staff said Durkan believes it’s worth examining how LEAD fits into the shifting realities of a city that has more people living outside with serious behavioral and substance use issues.

"While not a homelessness or behavioral health program, the connection between behavioral health, housing stability and criminal justice involvement requires the City to ensure clients are receiving appropriate services," Formas said.

Durkan has hired a consultant who will examine the program in the coming months, even after a contract has been provided.

But what Durkan called due diligence has led to confusion on the council, as well as questions about whether the mayor was slow-walking the program intentionally.

"As elected leaders, it is irresponsible for us to allow policy in this area to be set through neglect and atrophy," the council members said in their letter.

The mayor's office promised Friday that would not occur, and Formas said the contract, for $6.2 million over the course of the year, would be released in two weeks.

In a text message from South Africa, where she's talking to local officials about LEAD, co-founder Lisa Daugaard said she was cheered by recent conversations she'd had with the mayor's office in which they talked about the scope of the program while "working together to identify resource gaps in what we can offer participants, and ways to enhance those supports. That would be a resolution we’d embrace with enthusiasm, and we’re more than ready to get to work."

Since its creation, LEAD has spread across the country — and even the world — to cities desperate for an alternative to the expensive revolving door of arrests and rearrests.

It continues to enjoy broad support in Seattle from most major players in civic and political life. In a surprising convergence of alliances, 19 organizations signed a letter Thursday, urging Durkan to immediately release the funds. Among them were the Downtown Seattle Association and Socialist Alternative — two groups often on opposite ends of an issue.

Despite broad support, even those most intimately involved with the program warn that it’s fragile and can fall apart without proper care. A LEAD pilot in New Haven, Connecticut, has so far not gone well, in part because of lack of buy-in.

Daugaard and others say LEAD is well-suited to help even the most complicated population that may struggle with severe behavioral and substance use issues.