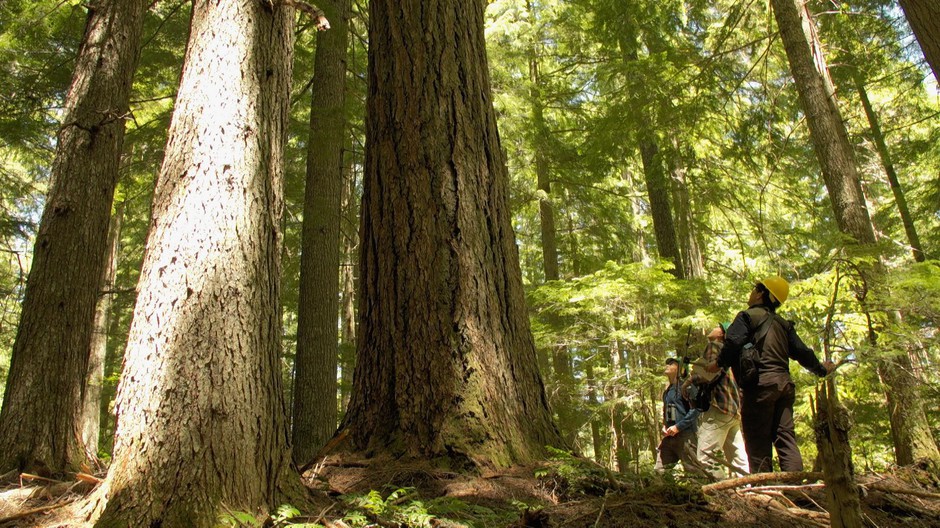 Oregon State University scientists detect a tagged hermit warbler in the canopy of an old-growth grove in the Oregon Cascades. Learning how the small songbirds travel over the course of a day could provide insight into why bird populations are doing well in old-growth forests while declining in other warming landscapes of the Pacific Northwest. (Greg Davis)

The U.S. Forest Service is considering changing a rule that prevents logging of large trees on national forestland in parts of Washington and Oregon.

The land management plans, known as the “Eastside Screens,” came about in 1995 to protect old-growth trees east of the Cascades. The rules were meant to be temporary. The Forest Service wants to amend a section of the policy called the “21-inch rule,” which prohibits harvesting trees that are greater than 21 inches in diameter.

Conservation groups say the provisions, though largely unknown, are “the most meaningful protections for large trees and old-growth” in Oregon.

“By keeping old-growth logging off the table for 25 years on public lands, these protections for wildlife habitat, clean water and other values have kept the peace and created conditions for some level of agreement over forest management in the region,” Rob Klavins with Oregon Wild said.

The amendment would apply to the Deschutes, Fremont-Winema, Malheur, Ochoco, Umatilla and Wallowa-Whitman national forests, which are primarily in Oregon, with some sections in southeastern Washington. It wouldn’t apply to the portion of Washington’s Okanogan-Wenatchee National Forest that falls under the Eastside Screens management plan. The Colville National Forest, in northeastern Washington, recently removed the Eastside Screens provisions — including the 21-inch rule — from its forest plan.

“It should be done on a stand-by-stand basis,” he said. ”Using just one number for every stand out there, without actually looking at the stands, is just flawed. It’s using this absolute approach, and it just doesn’t work.”

The Forest Service says it’s trying to encourage a mix of different types of trees of all different sizes. That would help forests better withstand wildfires and drought, says spokesperson Stephen Baker.

“The ability to remove some 21-inch trees would help us manage for more resilient forests with species that are less likely to die in wildfires and other disturbances. It could also allow us to manage homogenous, high-density stands in a way that lowers the potential for large-scale forest die-offs from individual disturbances like a wildfire or an insect outbreak,” Baker wrote in an email.

Baker says the 21-inch rule has allowed fast-growing, shade tolerant species to thrive, such as grand firs. That means there are bigger trees in forests, but not necessarily older trees. He says those younger trees can outcompete more fire-adapted species, such as ponderosa pines.

A recent white paper from the Forest Service’s Pacific Northwest Research Station said “tree diameter alone” was an “insufficient guide for restoration.” In its recent bioregional assessment, the Forest Service said the Eastside Screens have helped stabilize old-growth forests on federal lands, but that these forests are now at risk of increasing wildfires.

The Forest Service is developing a draft environmental assessment that would provide four alternatives for tree removal — likely due out at the end of July. A final decision is expected by next spring.

Conservation groups are concerned this decision has come too quickly and will have too little public input. Twenty-seven groups recently co-signed a letter asking the federal government to put decisions on hold until after the pandemic.

“If the Eastside Screens are to be revised, it must happen through a balanced, transparent, comprehensive, socially just and scientifically sound mechanism that prioritizes wildlife protection, climate resilience and public consensus over speed and economic exploitation,” the groups wrote in the letter.

Another concern is that a workshop put on by the Forest Service about the amendments took place on an Indigenous holiday, when tribal governments were closed, the letter says.

Oregon Wild's Klavins says these large trees provide much-needed habitat for wildlife and can act as carbon sinks, an important side effect as the climate warms and extreme wildfires become more frequent.

This story was first published on Northwest Public Broadcasting on July 13, 2020.