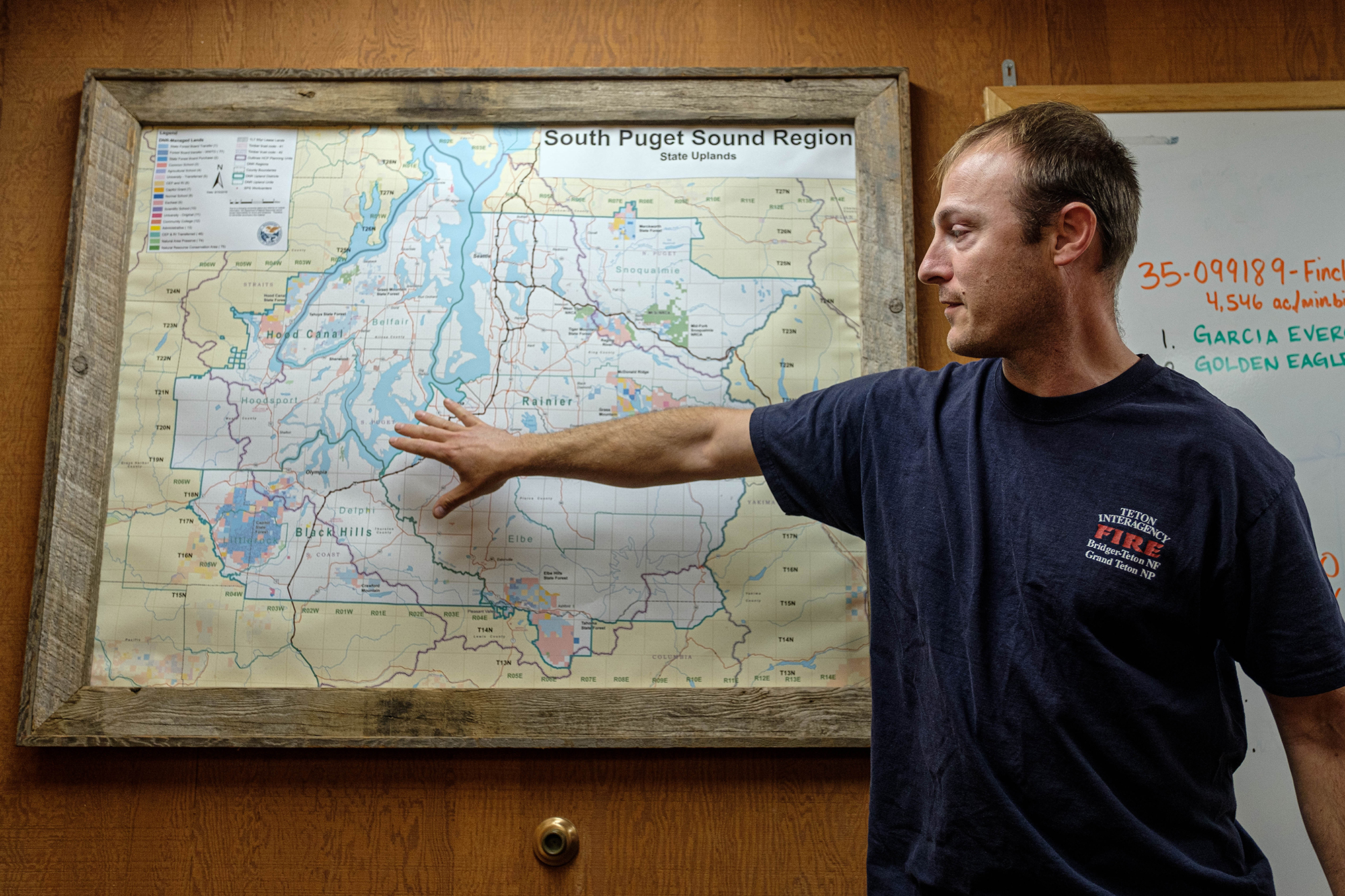 Daniel Donato, a research scientist with the Department of Natural Resources, points to the location of the 2017 Norse Peak Fire on July 10 2019. (Caean Couto)

After two years of seeing a steady rise in the number of wildfires burning across Washington state, the 2020 core fire season is looking to pull way ahead in wildfire starts.

But this year’s unprecedented uptick in the number of fires has an unforeseen culprit: people cleaning their yards during the pandemic.

Washington fire and land managers say they’ve seen a significant number of wildfires in “every corner of the state.” So far this year, the state Department of Natural Resources says it has responded to more than 468 wildfires of varying sizes — nearly double the average number of fires for the same time over the previous 10 years.

Franz said recent conditions have also been hot and dry, which makes outdoor burning more likely to start a fire.

New burn bans went into effect June 26 on DNR lands in most of central and southeastern Washington.

The number of fires has been increasing over the past 10 years, according to DNR fire meteorologist Josh Clark. He says over the past decade, there were about 217 fires year-to-date on DNR-managed land.

“We have just blown that out the water for the last three years running,” Clark says.

So far this year, there have been 325 fires on DNR-managed land, as of June 23. He says that right now fire conditions are near normal, and they may be even below normal over the next month. But that doesn’t mean there won’t be fires.

“DNR will likely still see fires with incredible frequency, as more humans go out on the landscape, especially after coronavirus restrictions continue to be lifted and we get closer to the summer holidays and the like,” Clark says. “It’s just that we’re not expecting fires to get as large this year.”

Most fires on DNR-managed lands are caused by people.

Large fires are considered to burn of more than 300 acres in grasslands and more than 100 acres in forests, not the “mega fires” like the Carlton Complex fire in 2014 (it was started by a lightning strike).

Clark says it’s really difficult to predict the number of “mega fires” that may happen in a given season, but he doesn’t expect this year to be catastrophic. (A DNR spokesperson crossed both her fingers on the Zoom call when this question came up.)

Fewer mega fires would be good news as officials plan ahead to keep firefighters safe in fire camps and on lines this summer, where they’ll have to contend with a deadly virus on top of their normal jobs.

Officials moved training sessions online and have developed protocols for dealing with the coronavirus during fire season.

“We would have to scatter. We’d have to feed folks differently and probably use more local resources instead of our kitchens because we go through a buffet line,” Pearce says.

Fire managers will also reduce the number of people in fire engines.

State officials will require firefighters to wear masks while they’re in camp, in engines or on helicopters. The flammable masks can’t be worn on the fire lines.

This story was originally produced for Northwest Public Broadcasting on June 25, 2020.