The New York Times writer released a book about society’s stagnation right before COVID hit. He talks about what has changed and what hasn’t ahead of the festival in May. 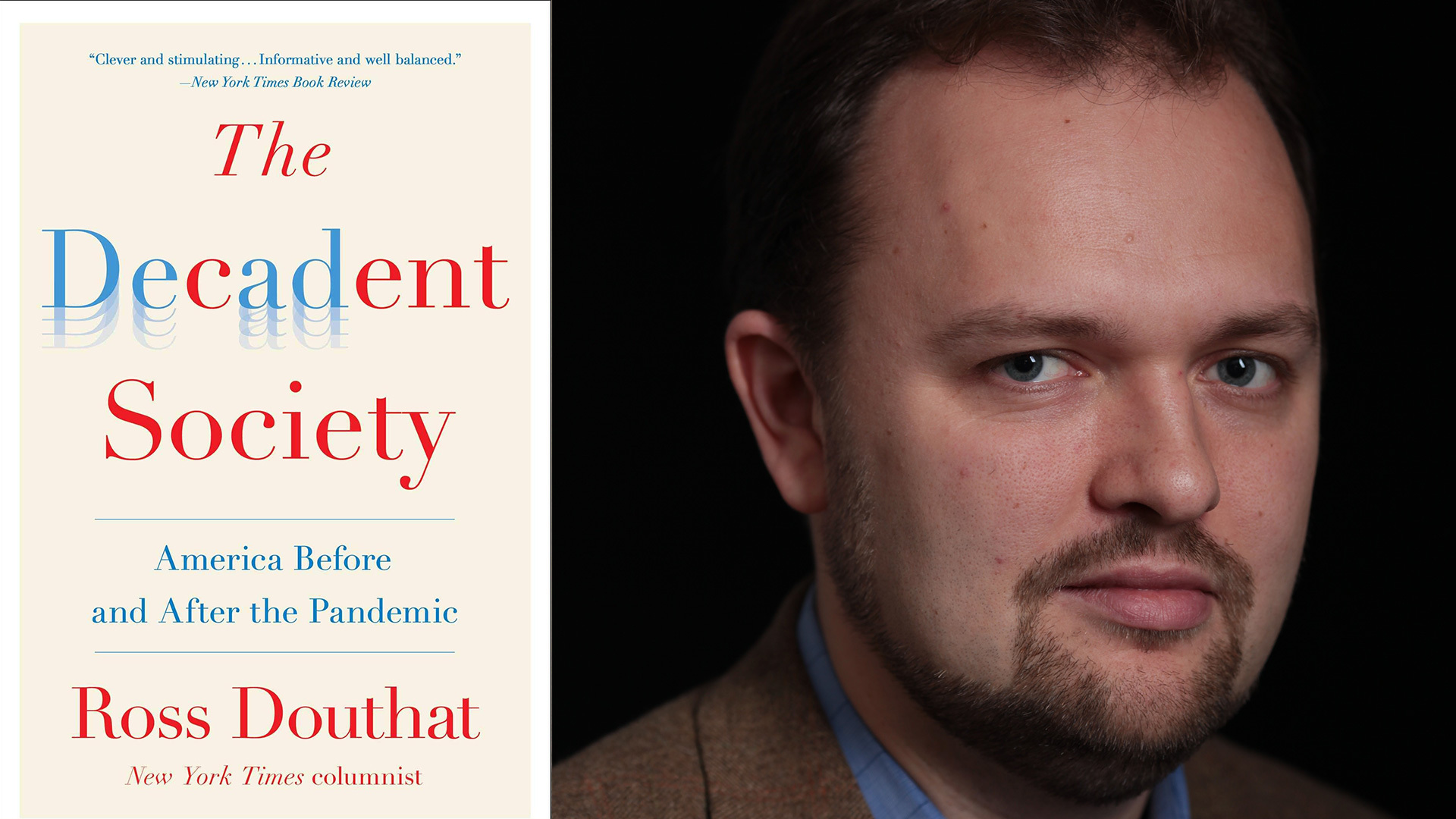 Ross Douthat chatted about the paperback release of The Decadent Society ahead of the Crosscut Festival.

At the beginning of 2020, Ross Douthat, a columnist for The New York Times op-ed page, published a book about what happens when society reaches stagnation and stops advancing. He described these societal doldrums in the title, and throughout the book, as “decadence.” But just after The Decadent Society: How We Became the Victims of Our Own Success hit the shelves, the coronavirus pandemic followed — shaking our nation, and the world, out of our stasis.

After a year of societal change, adapting to use technology in countless new ways in our daily lives and the rapid creation of a COVID vaccine, Douthat revisited the idea of decadence and released an updated version of the book in the paperback edition, with a new title, The Decadent Society: America Before and After the Pandemic. Douthat took the time to chat with Crosscut about this paperback release ahead of his upcoming conversation at the Crosscut Festival.

Douthat will join our conversation on The Republican Reckoning on Thursday, May 6, at the festival. Every year, journalists, politicians, authors and newsmakers from our Pacific Northwest community and around the nation come together at the Crosscut Festival to take a hard look at the people, policy and events that shape our lives. Because we can’t gather together in person just yet, this year’s Crosscut Festival will be a virtual, free event, spanning six days, May 3-8, 2021. (Get tickets now.)

Here is what Douthat had to say about the paperback release of The Decadent Society, about things that happened over the past year that were “not decadent” and about the Crosscut Festival.

When people hear the word decadent, they often think “opulence.”  In your book, The Decadent Society, it is described as a society more dependent on “repetition” rather than “innovation.” Could you describe this idea of decadence?

Yes, I'm not just referring to the decadence of a Roman palace or a weekend at the Las Vegas imitation. I'm trying to describe a condition that afflicts rich and successful societies like ours, where you get economic stagnation, cultural repetition and institutional gridlock and decay at a high level of wealth and development. So, basically, the idea is that starting in the 1970s, all across the Western world, growth rates decelerated, technological progress slowed down everywhere except for internet technology, our institutions became increasingly ineffective and sclerotic, birthrates plunged below replacement level. And all our religious and intellectual arguments started going in circles — while all our movies eventually became Marvel or Star Wars sequels. That's the condition of decadence: a situation where progress isn't delivering on what we hoped, where belief in a better future has waned, where innovation has declined ... but where the society is still rich and stable enough that things can just keep going, disappointingly, for decades yet to come.

You recently posted on Substack about the timing of your book in 2020, “The Decadent Society came out in hardcover about three weeks before Italy’s hospitals were overwhelmed by the coronavirus and lockdowns began to descend across the Western world. So it was probably not the ideal time to bring out a book arguing that our era is defined by drift, stalemate, boredom and repetition.” How have you adapted the paperback version of the book with this in mind?

Yes! The adaptation suggests that certain things that happened in 2020 suggest that decadence might be escapable — for instance, the successful push to develop a vaccine was definitely not decadent, and there are signs that a broader scientific renaissance is being hastened by the experience of the pandemic. On the other hand, the way COVID-19 drove everybody indoors, deeper into virtual reality, shutting down every cultural institution outside the internet, canceling weddings, making dating difficult, creating a new "baby bust" on top of the existing fertility decline — all of that suggests that 2020 might have deepened decadence. Historically, plagues have sometimes led to periods of ferment and renewal, and sometimes just hastened institutional decline. It will take a little while before we know which tendency dominated in this case.

This past year was one of upheaval when problems with institutions came to light. When the world changed, organizations and individuals had to innovate and adapt. How does the paperback publication of your book address this?

Clearly the innovation required to develop the vaccine is a good example of how that can work. Another example is the possible transformation of the economy driven by a move to remote work, which was always possible once the internet existed, but hadn't happened because of habit and inertia — but might be happening now, in a way that (ideally) could lead to economic and social renewal outside the super-rich cities that have consolidated power in America over the last generation. So those [are] examples of adaptation — but in other cases, like the failure of public schools to figure out how to open, you have examples of institutions struggling to adapt, with big costs and few benefits for the parts of society they're supposed to serve.

I'd say it was a case study in the benefits and limitations of virtual reality. On the one hand, it was obviously remarkable to be able to continue to promote a book at a time when nobody could really leave their home. But, at the same time, there's clearly something big lost without the human, personal connection to readers and potential readers that you get from being in an actual room, seeing people's faces and reactions somewhere other than a screen, etc. Zoom handles certain things really well, but in terms of intellectual engagement and dialogue, it can't really replace the human factor, the energy of being together in reality.

Speaking of virtual events, you’ll be joining us for the Crosscut Festival on a panel about the Republican Party finding itself at a crossroads. What do you hope this conversation will address?

Well, I feel like the Republican Party has been at a "crossroads" for my entire adult lifetime, and it's always finding a way to simply stay where it is, in a state of (yes) decadence, with a policy agenda that's better suited to 1980 than 2010, and refuse to choose a road ahead. So the question for the panel, maybe, is whether the strangeness and shock of the Trump presidency has changed that, or whether, post-Trump, most Republican leaders just want to pretend it all never happened, and go back to their old slogans and old habits.

Join Ross Douthat and other newsmakers at the Crosscut Festival. Get your tickets now.