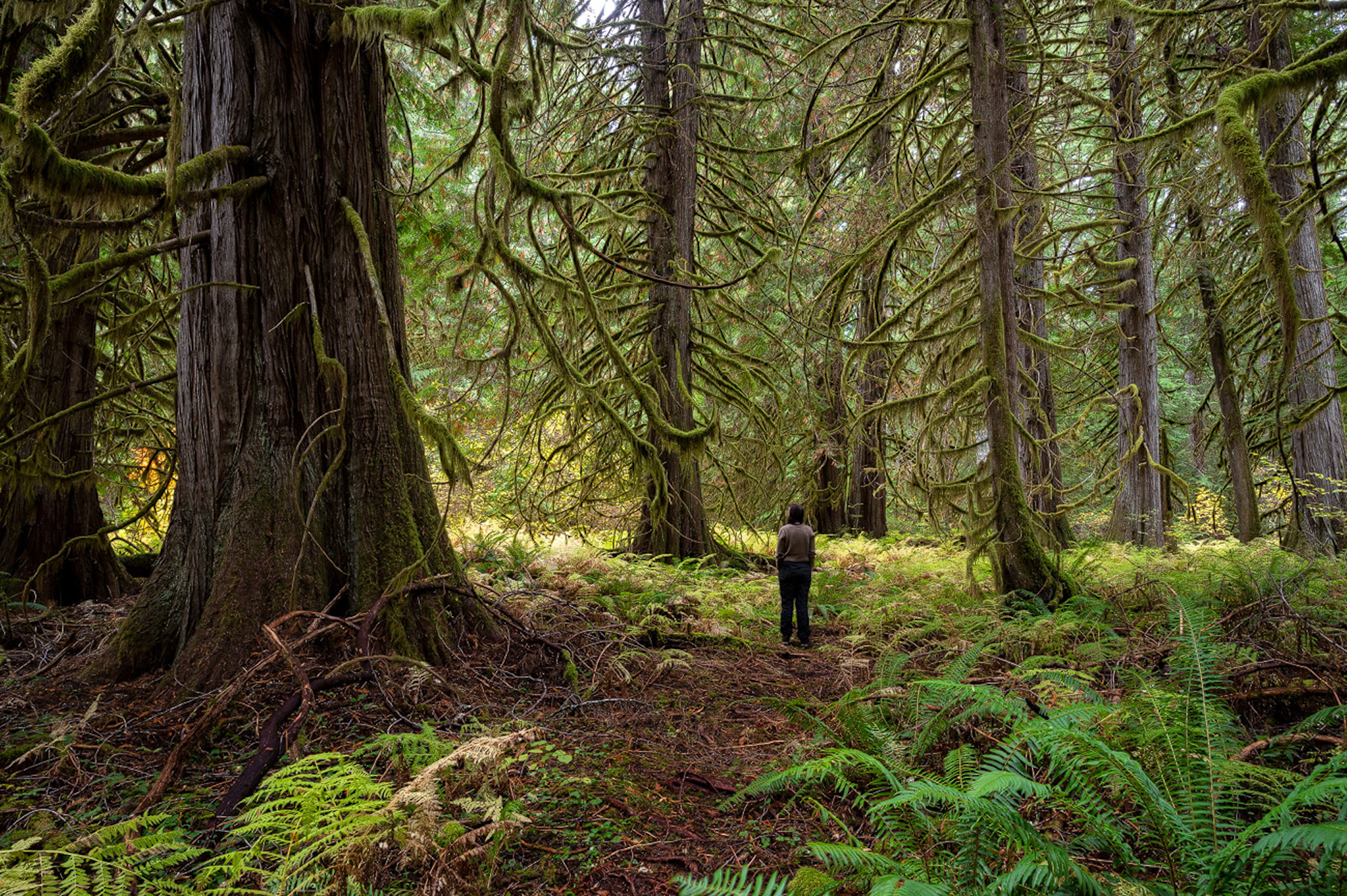 On Earth Day this year, President Joe Biden visited Seattle’s Seward Park — home to 200-year-old stands of bigleaf maple and western red cedar covered in moss and licorice fern — where he gave a speech and signed an executive order aimed at strengthening the nation’s forests, communities and local economies.

Section 2 of the executive order recognizes the value of mature and old-growth forests as natural tools against climate change and the biodiversity crisis. After all, big trees store a lot of carbon, and protecting older forests helps maintain healthy ecosystems and critical habitat. The order also directs the U.S. Forest Service and Bureau of Land Management, or BLM, to inventory these forests on federal lands and develop policies that conserve them as a linchpin of U.S. climate policy.

By the time all that comes to fruition, however, many of these forests could be gone.

Logging continues to pose a great and immediate threat to mature and old-growth forests, according to a new report “Worth More Standing” by the Climate Forests coalition. This initiative works to conserve the remaining older forests and trees on federal lands, considering them “one of the country’s most straightforward, impactful and cost-effective climate solutions,” according to the coalition’s website. The group is made up of more than 100 organizations including Earthjustice and the Center for Biological Diversity.

The report highlights 10 egregious mature and old-growth logging projects currently planned or taking place on federal lands, from Oregon and California to North Carolina and Vermont.

Currently, there is an ongoing process to define mature and old-growth trees — which the authors behind the report consider to be trees that are at least 80 years old.

Still, while the authors of the report deem the executive order a victory for the old trees, they acknowledge that much work is still to be done to fully protect them. That is why the Climate Forests coalition is calling on the Biden administration to enact a lasting rule to protect mature and old-growth forests from logging on federal lands as a cornerstone of U.S. climate policy.

“Without a federal rule in place to restrict logging of these critical forests,” said Blaine Miller-McFeeley, senior legislative representative at Earthjustice and part of the Climate Forest coalition, “these trees could be lost, along with the opportunity to make significant progress toward addressing climate change.” 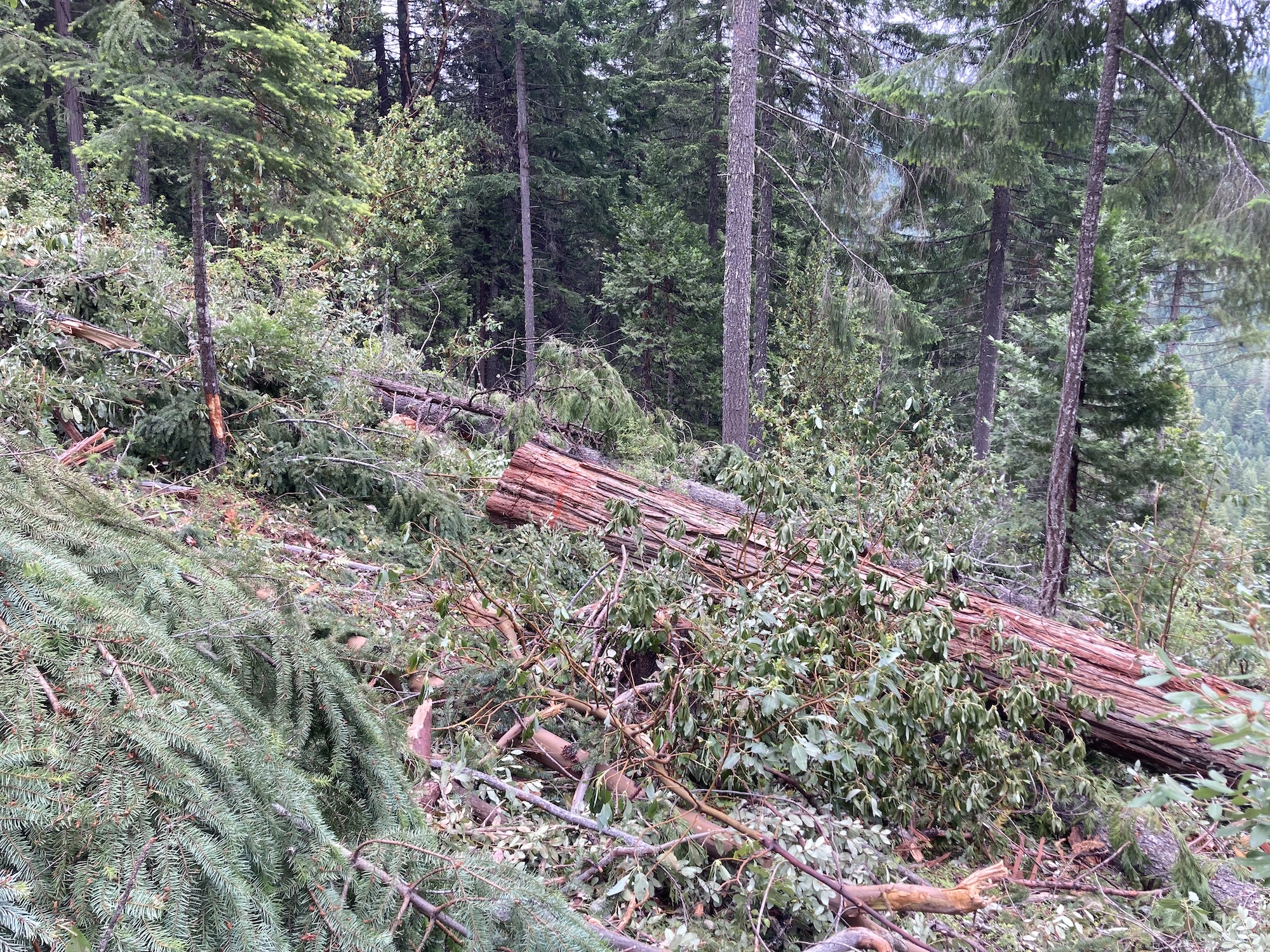 Old trees recently cut at the "Oh Windy" timber sale, part of the Poor Windy Environmental Assessment in the forests owned by the Medford District BLM that bridge habitat from Oregon’s Coast Range to the Cascade Mountains. (Courtesy of Joseph Vaile, www.kswild.org)

Old trees recently cut at the "Oh Windy" timber sale, part of the Poor Windy Environmental Assessment in the forests owned by the Medford District BLM that bridge habitat from Oregon’s Coast Range to the Cascade Mountains. (Courtesy of Joseph Vaile, www.kswild.org)

About 300 miles south of Seward Park, in Oregon’s Willamette National Forest, 2,000 acres of older forests are up for logging in the Forest Service’s Flat Country Timber Sale. Drive south 200 miles more, and another 4,573 acres of mature and old-growth trees are set to be logged in the Poor Windy Project, in forests managed by the BLM’s Medford District that bridge habitat from Oregon’s Coast Range to the Cascade Mountains. Within the 800,000-acre project area that covers the entire BLM Medford District, up to 20,000 acres of trees 36 inches in diameter and more than 150 years old are up for commercial logging in the Integrated Vegetation Management for Resilient Lands. That includes about 17,000 acres within late-successional reserves, or old-growth forests — habitat established to protect endangered species like the northern spotted owl, according to the report.

These examples from the Climate Forests coalition report “are not aberrations but part of a pervasive pattern of federal forest mismanagement that routinely sidesteps science to turn carbon-storing giants into lumber,” the report says.

Oregon has a long and contentious history of timber production. For one, the 1937 Oregon and California Lands Act essentially paved the way for logging in the area, according to Joseph Vaile, the climate director for the Klamath-Siskiyou Wildlands Center. Additionally, the BLM has a strong hold over much of the public forestland in the state.

“In Oregon, about 2½ million acres of forest are managed by the BLM in the Department of the Interior, which is different from the Forest Service, in the Department of Agriculture,” Vaile said. “It’s a unique and historical relic that these BLM forests tend to be where there’s quite a bit of mature and old-growth forests at risk, and where they emphasize that kind of logging.” 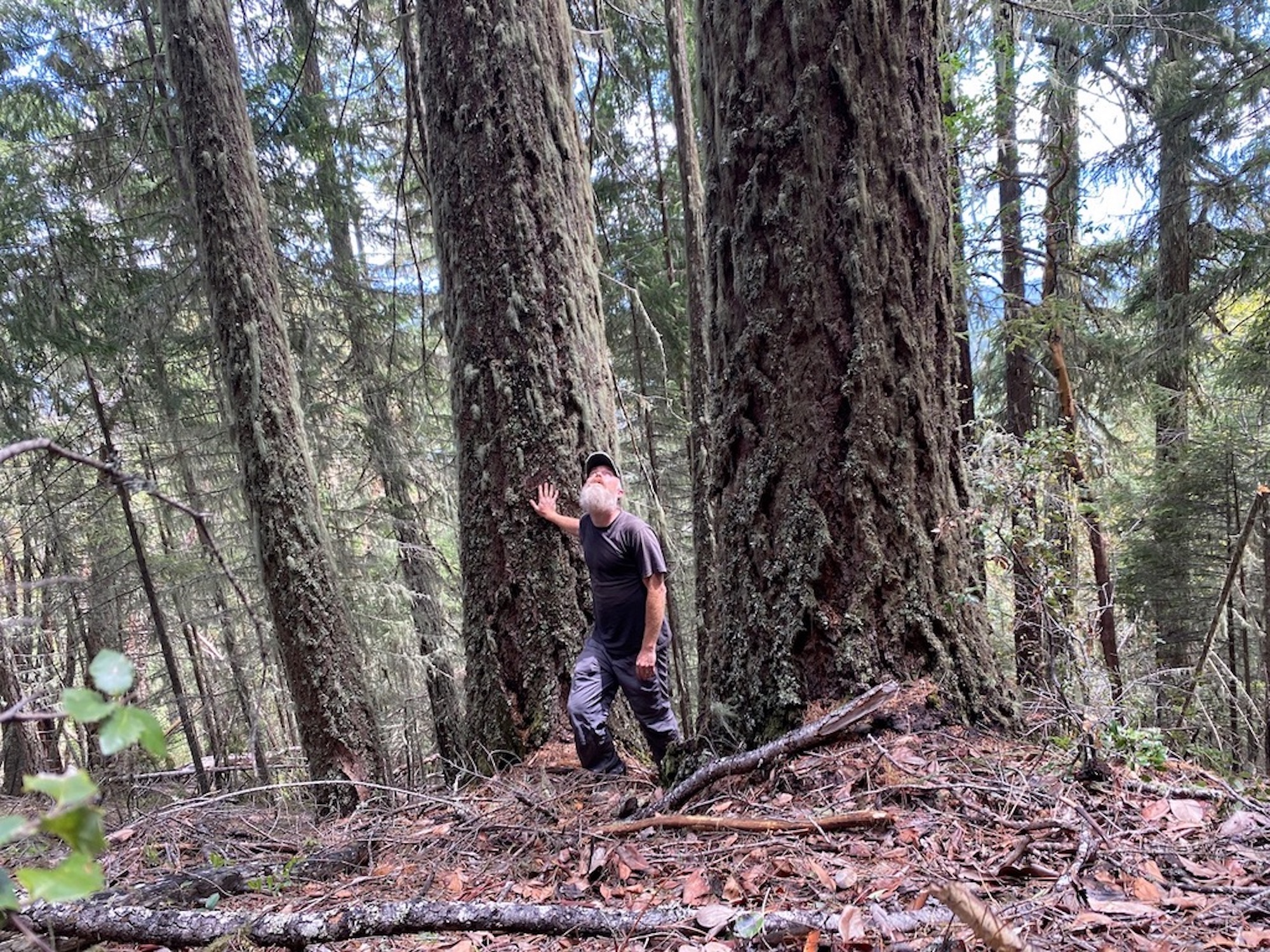 Luke Ruediger stands under the 37" and 40" diameter Douglas fir trees proposed for logging in unit 5-1 of the Late Mungers Timber Sale, a project "tiered" to the Integrated Vegetation Management Project. “Tiering” is a BLM administrative term that means “they are connecting the specific project or timber sale to a previous analysis, and in so doing, avoiding site specific, project level analysis on the individual project,” according to Ruediger.(Courtesy of Luke Ruediger)

Luke Ruediger stands under the 37" and 40" diameter Douglas fir trees proposed for logging in unit 5-1 of the Late Mungers Timber Sale, a project "tiered" to the Integrated Vegetation Management Project. “Tiering” is a BLM administrative term that means “they are connecting the specific project or timber sale to a previous analysis, and in so doing, avoiding site specific, project level analysis on the individual project,” according to Ruediger.(Courtesy of Luke Ruediger)

The trees in Oregon are unique, according to Miller-McFeeley, because they are part of a temperate rainforest. “That means these trees are some of the most important from a climate perspective, and they are some of the oldest and biggest out there. If you look at a map of where the carbon storage in our forests is, a huge percentage of it is in Oregon,” he said.

A study by researchers at Oregon State University illustrates how forests in the Pacific Northwest have a lower vulnerability to drought and fire and have a high potential for storing carbon.

Not only are these forests excellent carbon absorbers that capture billions of tons of carbon, they are also critical habitat for species like the northern spotted owl and help keep rivers healthy, maintaining good water quality for all who depend on it. 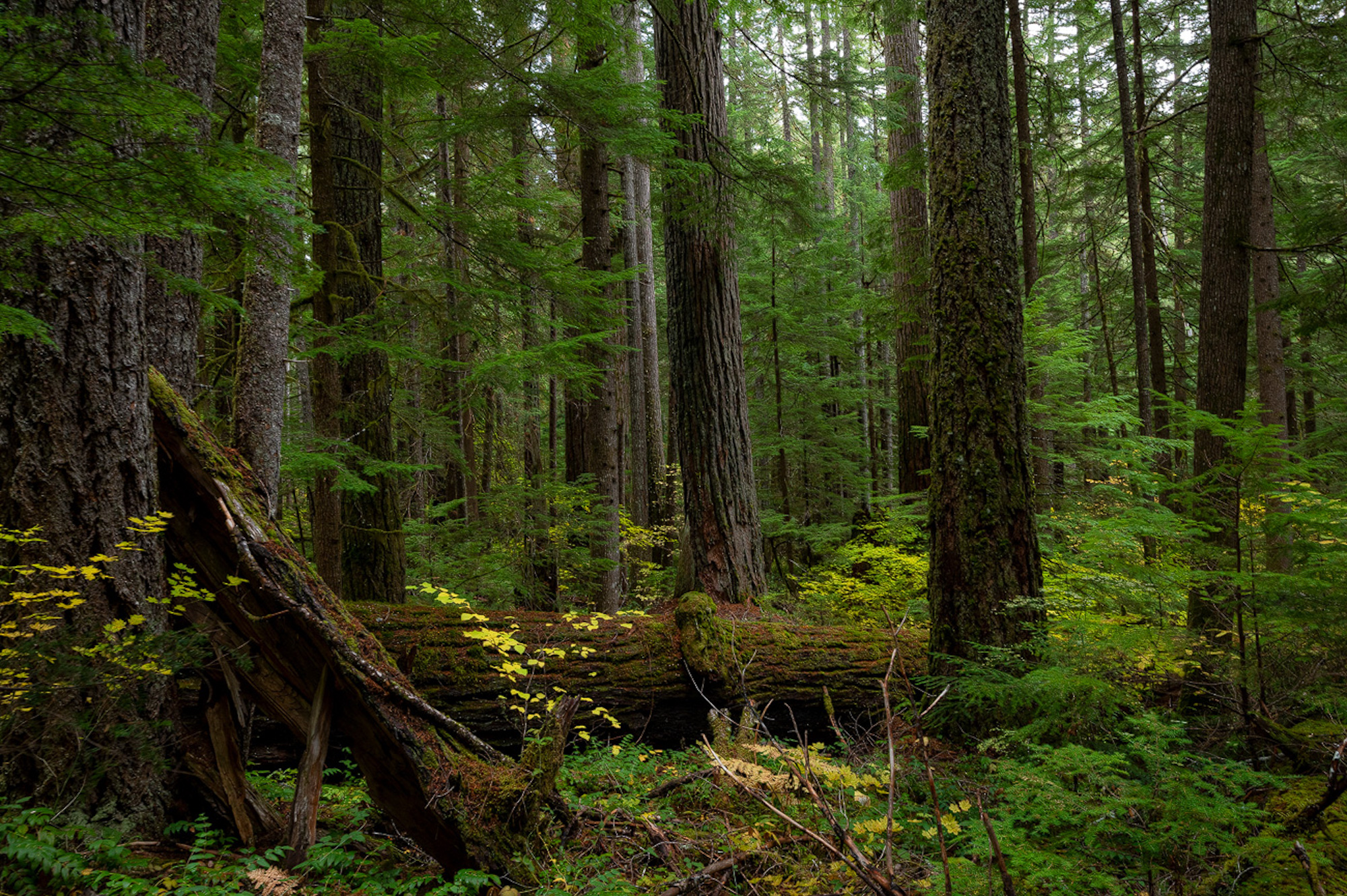 The Reasoning and the Rebuttal

The reasoning behind these logging projects, according to the BLM and Forest Service, is to increase forest resilience, reduce hazardous fuels and reduce wildfire risk.

“There’s a lot of rhetoric around forest restoration and resilience built into the language of these projects,” said Luke Ruediger, executive director of the Applegate-Siskiyou Alliance and conservation director for the Klamath Forest Alliance. “But we are seeing another timber sale to log mature and old-growth forests and to commodify conservation land use allocations, turning them into timber production zones,” he said.

Regarding wildfire risk prevention, “we cannot downplay the significance of wildfires, especially in the West,” said Randi Spivak, the public lands program director with the Center for Biological Diversity and lead author of the Climate Forests coalition report. “But they are climate-driven wildfires. To say that logging big old trees is going to help is not scientifically justified.”

In fact, mature and old-growth forests are extremely fire-resistant. “Large, old trees have high canopies that allow fires to burn underneath. They have thick bark that insulates the tree itself, and the cambium layer [the growing part of the tree trunk right under the bark] that processes water and nutrients from being damaged in wildfire events,” Ruediger said.

According to the report, “Removing large trees and reducing canopy opens the forest to more sunlight, hot, dry winds, and higher temperatures, which may increase wildfire risk.”

The memorandum lists drought, wildfires, type conversion (or removing forests for other uses, like agriculture) and insect outbreaks as the key threats to older trees. “And that is just untrue,” Spivak said, noting that less than 10% of mature and old-growth forests remain in the U.S. 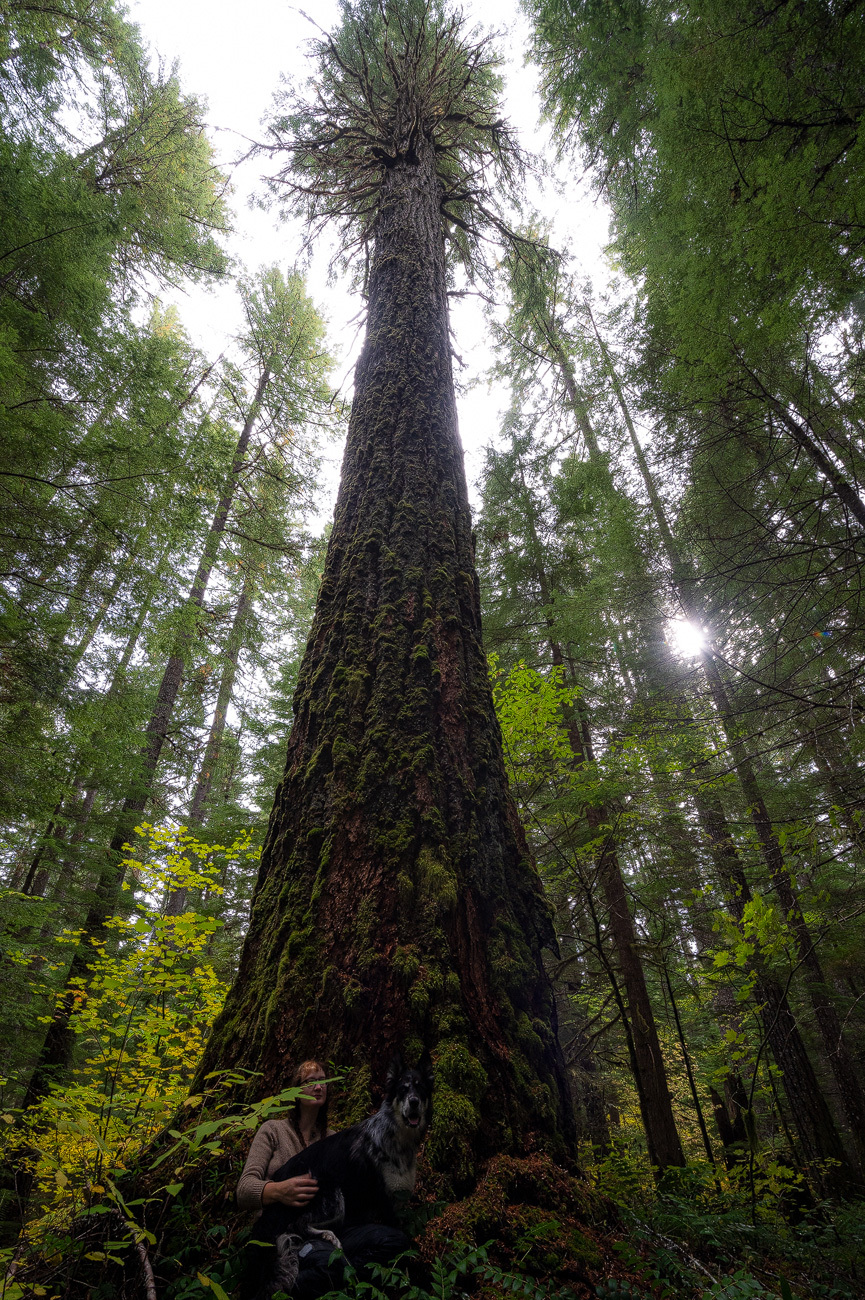 In a joint press release, the BLM and Forest Service said, “This work will help inform how the departments respond to President Biden’s Executive Order.”

In the meantime, the BLM and Forest Service, neither of which responded to repeated requests to speak with InvestigateWest, continue with their logging projects under the reasoning of restoration, resilience and wildfire risk prevention.

At this time, neither the executive order nor existing law allows the Forest Service and BLM to bar logging after they’ve awarded a timber sale, according to Spivak. “The [Forest Service] and BLM have long had the power to cancel a sale after it is awarded, but are extremely reluctant to do so,” said Steve Pedery, the conservation director with Oregon Wild, in an email to InvestigateWest.

To stop the logging of mature and old-growth forests, Spivak and Miller-McFeeley agree, these trees require permanent federal protection. “The Biden administration can help curb climate change by permanently protecting mature and old growth trees. It takes centuries to make up for the carbon lost when these trees are chopped down and we don’t have that kind of time,” Spivak said in a press release.

“Fortunately, the Biden administration has the authority to permanently end outdated forest-management practices that promote destructive logging,” the report says. “Most of the forests in this report are still standing, so there’s still time to ensure that these and future logging projects comply with the best available science and respect the president’s executive order.” 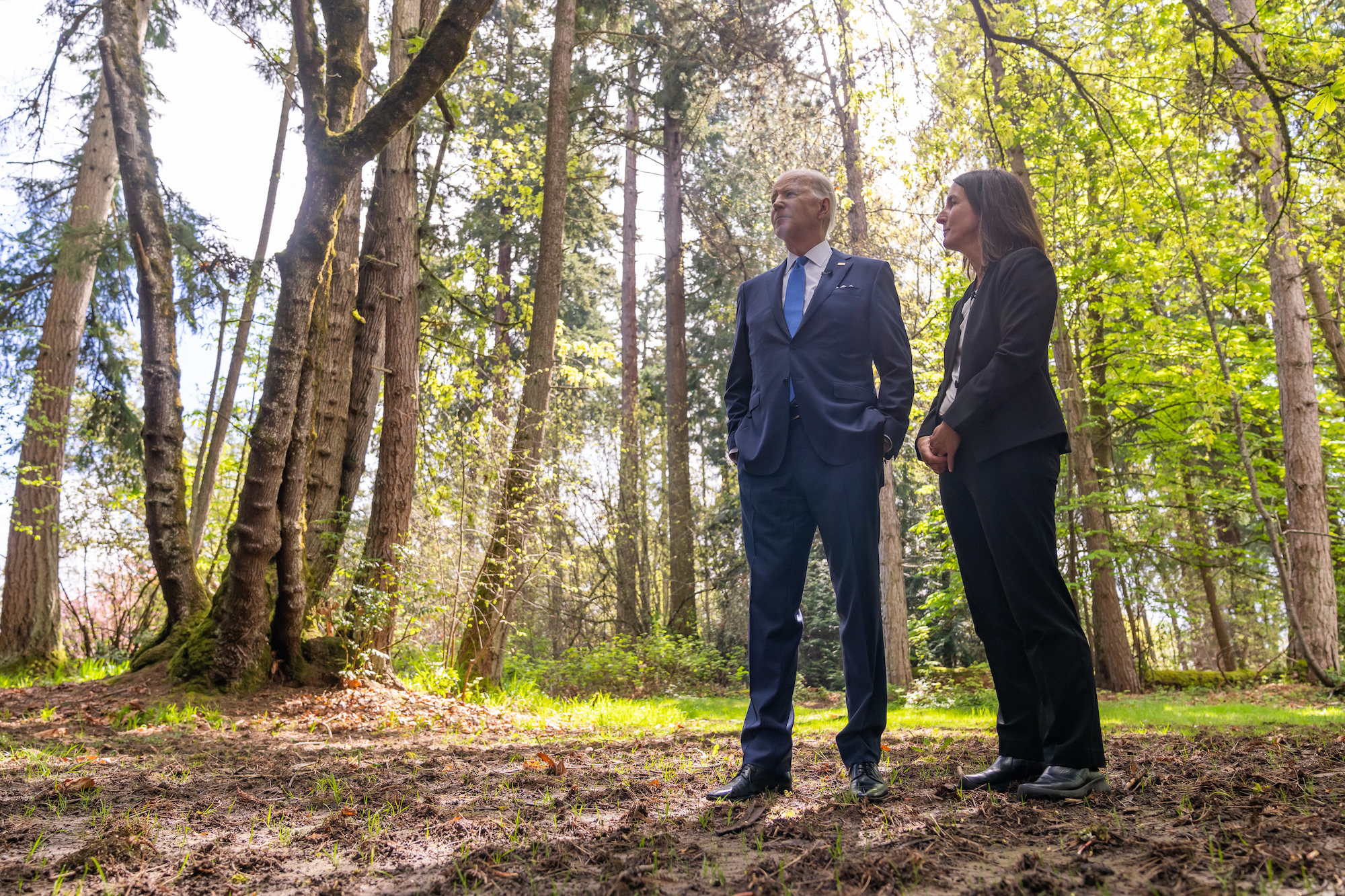 Rochelle Gluzman is a reporting intern at InvestigateWest. Gluzman is a master’s student at Sciences Po in Paris, where she studies journalism and environmental policy.