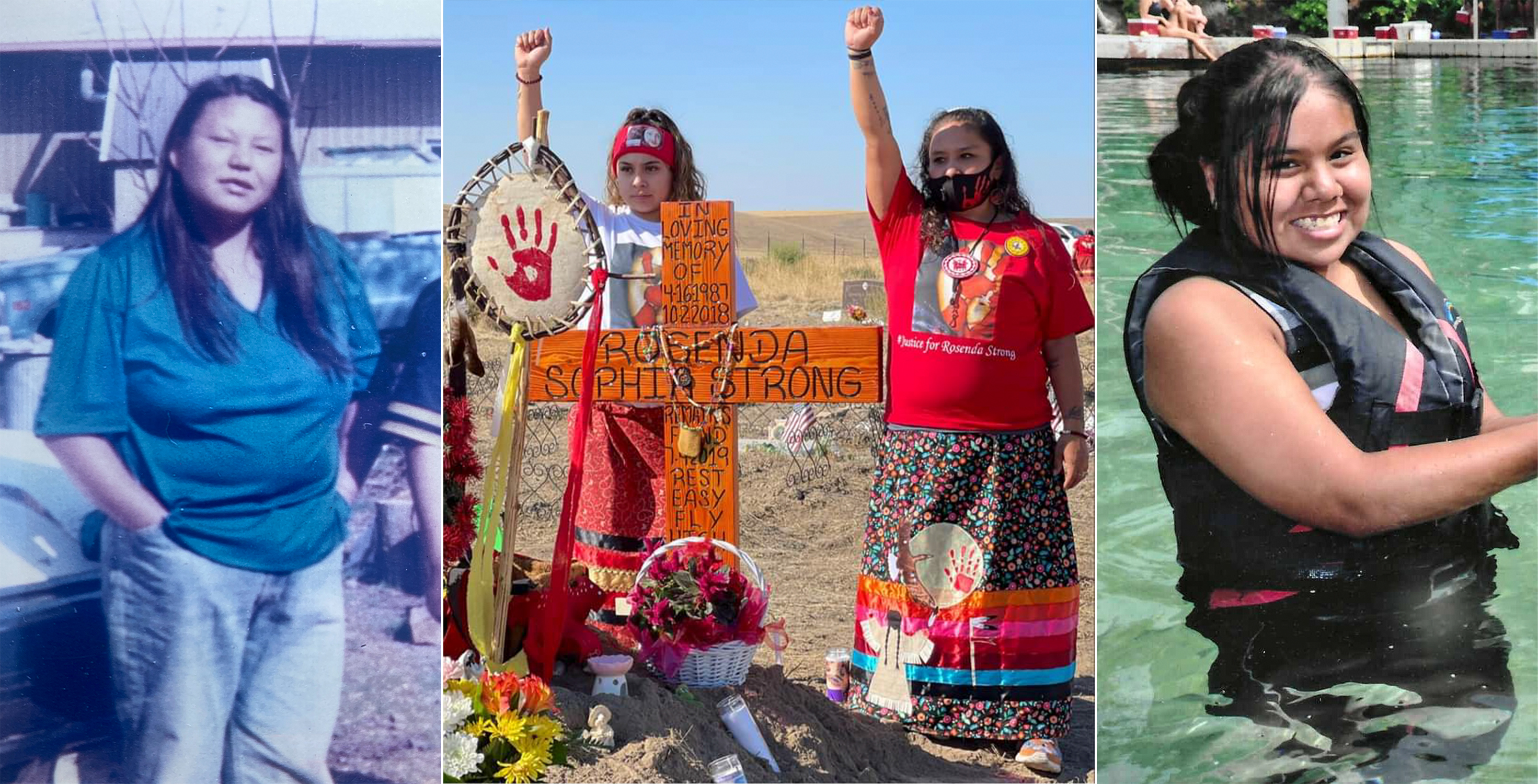 The internet, law enforcement and media outlets have been engrossed in the case of Gabby Petito, a 22-year-old whose remains were found in Wyoming late September.

Weekslong, unwavering attention to Petito provoked criticism from those who contend the same treatment is not given to Indigenous women, a group that has faced some of the highest homicide rates in the country over the years.

Washington state Attorney General Bob Ferguson announced in May that his office would lead a task force to examine systemic causes fueling “the high rate of disappearances and murders of Indigenous women.” In September, the Na’ah Illahee (“Mother Earth”) Fund, an organization that serves Indigenous communities in the Pacific Northwest, opened grant applications to help those actively searching for loved ones.

Crosscut recently spoke with three Indigenous individuals who have lost family members over the years: Cissy Strong-Reyes, whose sister’s remains were found in a freezer months after she went missing in 2018; Myrna Cloud, whose cousin disappeared in 2017 and was found dead from a skull fracture a few days later; and Patricia Whitefoot, whose sister’s disappearance in 1987 remains a mystery.

Their words emphasize a legacy of colonization, the ongoing effects of historical trauma and how disproportionate media coverage can impact Indigenous communities.

These interviews, which were conducted separately, have been edited for length and clarity.

Myrna Cloud (Yakama Nation): Well, of course, I’m a little upset. You can speak and speak and speak and try to speak up for something and then you see something like that. And it’s just, it’s kind of typical. And even though it makes you angry or upset, it’s been like this for years. It’s frustrating because as soon as somebody like that goes missing, they have all this media coverage.

A lot of people do get angry and I try my best not to be angry. Because I do feel bad, of course, I feel bad for her family, ’cause I know the pain they’re going through, I know the hurt. She is a human; we should all feel bad for her. Deep down though, for us, it hurts because we are considered, I guess, not as important. And that’s been going on for thousands of years.

Patricia Whitefoot (Yakama Nation): Every time I learn that someone has been reported missing, I usually say a little prayer for their safe return home to their family. And typically what happens if a person hasn’t returned home after a few days, I begin to relate to their fear.

Even after 33 years, I can still feel that pain that I felt when this happened with my sister. During the time my sister went missing, I began to learn more that Native women weren’t treated as important by the media, by law enforcement and society in general.

Cissy Strong-Reyes (Umatilla Tribe, descendant of Yakama Nation): My heart goes out to the Petito family. I know exactly what they’re feeling in the beginning of not knowing. But I feel that my sister was ignored and so were the other Indigenous women that were found in that same area as Petito was. And I just feel the media forgot that other women of color do matter, too. And it really opened up a feeling of, like, wow I feel for this family, I do, but what about us?

I’m glad my sister has some sort of a little platform that I was able to get for her here where we reside in Toppenish. I just wish we could get that same attention that Gabby did. She didn’t deserve what happened — nobody does. No woman does. But women of color, we deserve the same thing, too.

Why do you think Indigenous women in particular face such a high risk of being harmed?

Cloud: It goes back thousands and thousands of years ago. It started with the colonizers coming here and, back in the day, our women were treated fairly or even higher ranked within our tribes. And we didn’t have this violence against women until we had colonizers coming over here and doing that to our women.

And then everything that happened to our people. Now we have this colonization mindset within our own people.

Whitefoot: There’s just a history, I think, that no one really pays attention to, except tribal people know this history. Just because we live on the edge of society in general, these kinds of issues aren’t necessarily noteworthy. And this has to do with the colonization of this country.

Strong-Reyes: A lot of Indigenous women experience trauma within our home, like sexual assault or being molested at a young age. Alcohol is exposed to you. So I say we have a high rate because we experience so much trauma growing up, and generational trauma as well.

I believe that’s why a lot of us Indigenous women go missing. Because we’re lost and we find ourselves in the streets.

What is something that you think people don’t know or understand when it comes to the phenomenon of missing Indigenous women?

Cloud: I think the history, just like I said, it’s been going on for years. And for it to actually come to light fully the people have to realize the ugly history behind us and how it started and why it’s continued to go on, because we keep getting it pushed under the rug. And the actual history is not coming out on why we started getting treated like this and how now it’s a problem within our own people doing this to ourselves.

Whitefoot: We’re not, I don’t know what to say 一 what was it called before 一 the Leave It to Beaver family on the TV? We’re not your typical family, I mean, because of all of these issues that we face in our lives.

So what we’re doing is we’re talking about equitable treatment and it’s something that tribal people have not necessarily had. All we have to do is take a look at major federal policies and the politics and how it gets played out in your day-to-day life.

Strong-Reyes: I believe some don’t know because there’s not enough community action in this movement. If we want others to know about the movement and the epidemic of missing and murdered Indigenous women and girls and men, it starts with our community.

If we just came together as a community, I believe we’d be able to get more information out there for the younger generations so they don’t go missing or they don’t get murdered. Or if they see or hear something, they know to say something.

Considering the risk of violence faced by Indigenous women, what do you hope to see from the public moving forward?

Whitefoot: I think it’s important for people to realize that by being, for me, by being born a tribal citizen and living on tribal land means that our human life is at risk. And it has to do with the fact that, as a people … we are confronted by a maze of jurisdictional obstacles and gaps.

Strong-Reyes: I want to see more action, bringing more awareness to missing and murdered Indigenous women in all areas and coming together and helping each other.

I know there are 32 missing on the Yakama reservation, but I don’t see no posters of them. So I would like to see more involvement around this. We need this epidemic to end.

Other thoughts: The role of law enforcement

Cloud: There was just no seriousness taken on their part. Which is typical, I guess. Afterwards, we heard a bunch of people say it’s never really taken serious.

With the law enforcement not doing anything, we had to go out on our own and search. It was so bad, just the horrible feeling of them not taking it serious. I was four months pregnant at the time and I was out there in the middle of winter.

Strong-Reyes: Reporting her missing was probably the hardest thing I had to do. But what I didn’t know was gonna happen when I was trying to report her missing was pretty much getting her background told to me by the officer. I wasn’t there for her personal background.

And I feel that’s where they failed. Not just me or my family, but my sister.