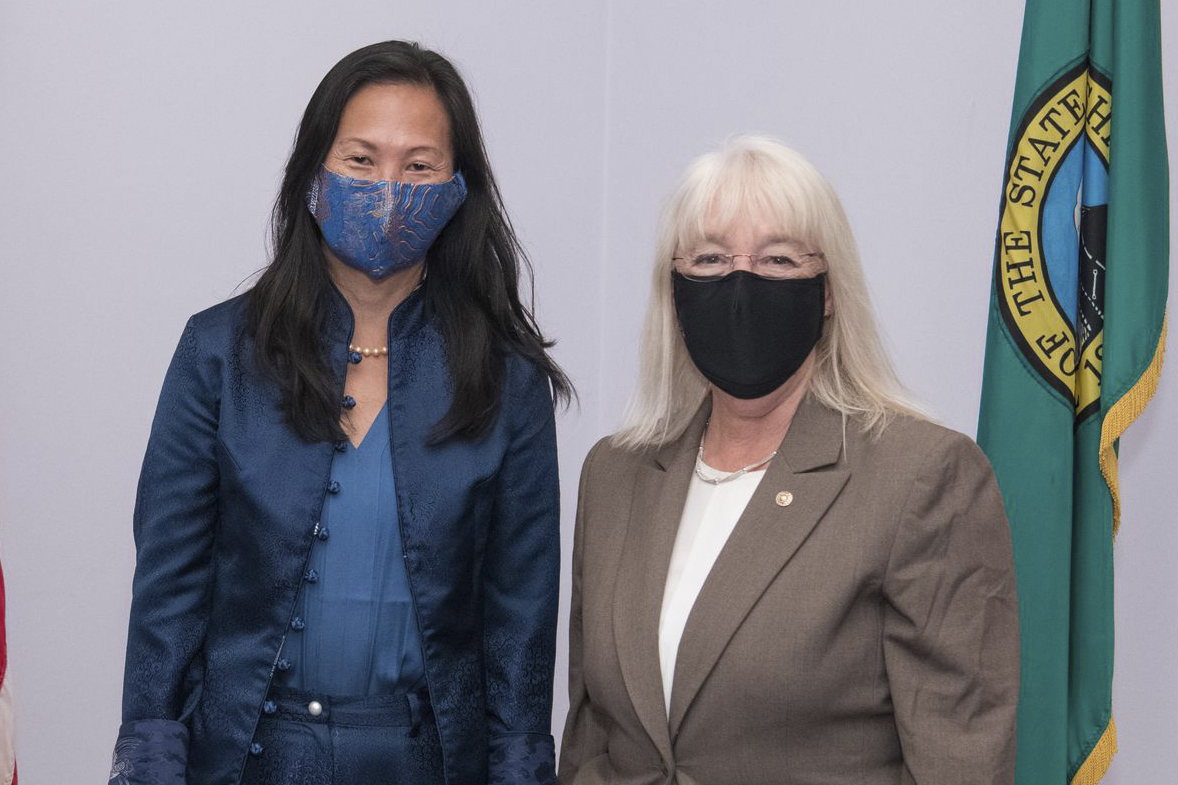 In this photo provided by the U.S. Senate Photographic Studio, Sen. Patty Murray, D-Washington, right, poses with Tana Lin in Washington, D.C., on June 9, 2021. The Senate has confirmed Lin, a civil rights attorney, as a federal judge in Seattle. She becomes the first former public defender and first Asian American to serve as a federal judge in Washington state, Murray said. (John Shinkle/U.S. Senate Photographic Studio via AP)

Washington’s newly minted federal judges are breaking barriers and mirroring communities across the state. These picks represent a concerted effort by the Biden administration to diversify the historically white, male court system.

Lauren King, David Estudillo and Tana Lin recently received Senate confirmation to serve as federal  judges in Washington’s Western District. Lin is believed to be the first Asian American federal judge in Washington state; King, a member of the Muscogee Nation is believed to be the first Native American federal judge in the state; and Estudillo, who is Latino, belongs to a community that makes up Washington’s largest minority population.

Lin is also believed to be the state’s first former public defender to serve as a federal judge, while Estudillo and King are, respectively, a former immigration attorney and a tribal law expert. These new judges signify an intentional shift: The federal government is working to answer the conservative influence of former President Donald Trump, whose administration saw the confirmation of more than 200 largely white, male judges.

Crystal Fincher, a political consultant based in Kent, said a good chunk of lawyers have prosecutor backgrounds, went to Ivy League schools and came from positions of privilege and power.

“A lot of America is not that,” she said, noting circumstances could shift with the newer appointments. “People can have more confidence that they might be able to, even if the decision doesn’t wind up in their favor, that they can be fairly evaluated.”

According to his advisers, Biden was concerned about Americans’ trust in the judicial system’s ability to rule fairly.

A recent Gallup Poll found that 54% of adults trust the federal judicial branch, a 13-point decline from 2020. U.S. Sen. Patty Murray, D-Washington, who voted to confirm all three judges, recommended them to the Biden administration earlier this year.

From Murray’s perspective, the judges confirmed during the Trump administration fell outside of the mainstream and had inadequate experience to sit on the bench. Trump was more likely than former Presidents George H.W. Bush and George Bush to bring women into the fold, but less so than former Presidents Barack Obama and Bill Clinton. Trump also appointed fewer nonwhite federal judges than Obama, Bush and Clinton.

Murray wants to restore balance in the courts and establish a federal bench that’s representative of people entering the courtroom.

“We have done a very good job of making sure that people in this country will begin to believe again that there is a system of justice that does uphold the rights of everyone, not just the wealthy and connected,” she said. “And that they will be listened to in a court of law in our country.”

The lack of representation of Lin’s professional background and identity on Washington’s federal bench motivated her to apply for the position.

“I didn’t know any lawyers or judges growing up, and in my 25 years as a federal litigator, I never appeared before a judge who looked like me,” she said in an email. “That the overwhelming majority of judges I saw were either former prosecutors or had come from large law firms made it hard for me to ever see myself in that role.”

The judge’s resume, according to a news release from Murray’s office, includes time as a public defender; her work on such equal justice projects at the Michigan Poverty Law Program; and her role as president of the board of directors of the American Civil Liberties Union of Washington. She hopes being welcomed onto the bench will strengthen confidence in the system and encourage people to consider working in law.

“Let’s just say I definitely was not expecting it,” Lin said of her new role. “I never thought that someone with my background and experiences would be selected to be a federal judge.”

Lin and her colleagues share identities with many of Washington’s residents.

“I don’t like the idea or the notion that someone from a particular community represents that community,” Brown said. “But having come from those communities is very important.”

Washington is home to more than two dozen federally recognized Native American tribes and ranks among the top 10 states with the largest populations of Asian Americans.

Estudillo, the son of immigrants from Mexico, is part of the Latino community 一 which makes up 13% of Washington’s population. He felt he was qualified for the federal judge position, but actually landing the role felt distant.

“When I finally reached the point where it became clear the appointment was a real possibility, it hit me,” he said in an email.

According to a news release from Murray’s office, Estudillo has represented clients in immigration removal proceedings and was appointed as a Grant County Superior Court Judge by Gov. Jay Inslee in 2015. He was the president of the Washington State Superior Court Judges’ Association at the time of his confirmation vote.

In addition to maintaining the public’s confidence, Estudillo hopes his background will make similar positions feel accessible to others.

“Many people often feel they do not fit a particular mold, fear taking a chance and eventually allow opportunities to pass,” he said, adding that people should realize there is no mold. “When you take a chance, it is about shaping the perceptions of others, which then provides more people with the opportunity to shine.”

Breaking the mold is what makes King’s confirmation stand out.

“I never dreamed that I would have an opportunity like this,” she said in an email.

She has taught federal Indian law, worked on the Washington State Gambling Commission and been a judge in the Northwest Intertribal Court System, according to a news release from  Murray’s office. To King's knowledge, she is the first district court judge in Western Washington who has specialized in Native American law as a practicing attorney 一 which she considers a strength.

“Many people mistakenly think that Native American law only involves tribes’ internal laws,” she said, “but it actually involves a much broader range of legal issues,” including issues of state and federal law.

As a practicing attorney, King said she has represented clients in several realms, including commercial litigation, employment law, treaty interpretation, the scope of sovereign powers, construction law and taxation.

The old-school path to the bench usually meant being a prosecutor or civil litigator at a large firm, said new U.S. Attorney Brown, who believes representation is important 一 but only if people behave differently and bring new perspectives.

“Having a bunch of brown and Black faces on the court is great,” he said. “But what’s more important to me is how they will potentially shape the way justice is done.”