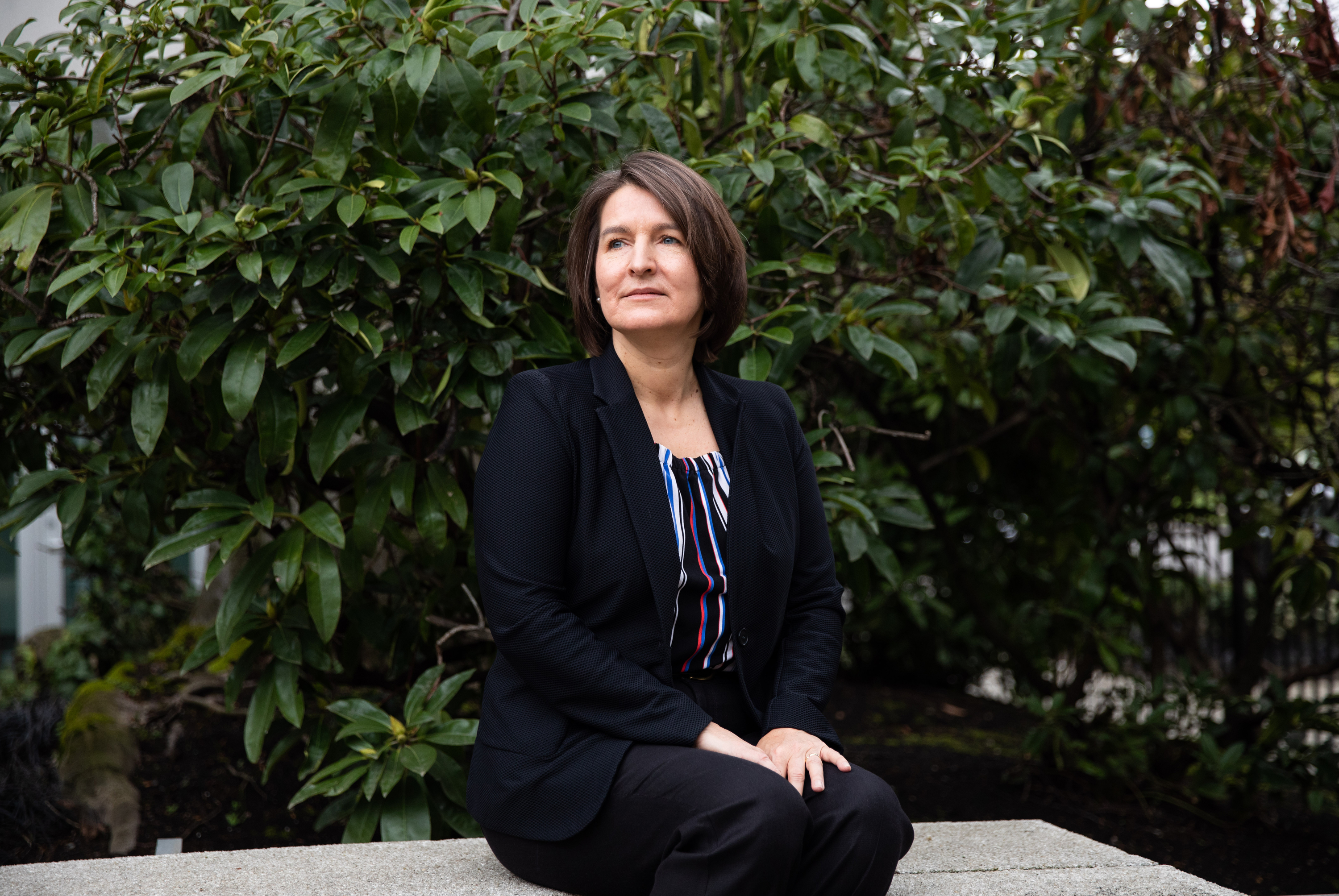 Kristin Winkel, the chief operating officer of Jewish Family Service, outside of her office in Capitol Hill on April 11, 2022. (Amanda Snyder/ Crosscut)

When Afghanistan’s government collapsed last August, Washington state’s refugee resettlement agencies launched into hyperdrive to welcome new arrivals. As organizations continue to resettle displaced Afghans, they are once again gearing up to accommodate a new wave of refugees, this time because of Russia’s invasion of Ukraine.

Kristin Winkel, chief operating officer of Jewish Family Service, said “there is no precedent” for the back-to-back crises. Her organization is one of a few resettlement agencies in Washington that supports displaced people by meeting needs such as housing and food.

Annual refugee admissions into the United States have not exceeded 100,000 since fiscal year 1994, though Americans may see these numbers creep back up after President Joe Biden announced the country would accept up to that many refugees from Ukraine alone. This move follows the resettlement of more than 70,000 Afghan nationals into the U.S., according to a Feb. 19 update from the Department of Homeland Security.

In response to the global events, the U.S. in March granted Ukrainians and Afghans temporary protected status for 18 months. For fiscal year 2023, Washington lawmakers devoted more than $19 million for the state to contract with nonprofits to provide resettlement services.

“It is wonderful that we live in a state that is so welcoming of refugees,” Winkel said.

That hospitable culture is being put to the test in the Evergreen State, which has already played a significant role in resettlement. Washington was among a handful of states that, as of December, had welcomed more than half of the 31,611 Afghan evacuees who left U.S. military sites in the weeks before. Agencies were already navigating their own hurdles, including the pandemic, diminished capacities and hiring obstacles, according to Gov. Jay Inslee’s office.

Now these groups are preparing to to help resettle Ukrainian refugees. Daryl Morrissey, director of refugee resettlement at Lutheran Community Services Northwest, expects this second push to be more manageable: A lot of people will be arriving, he said, but not in such a short window of time.

The state steps in

Washington’s culture of accepting refugees, which hearkens back to the Vietnam War, was tested in recent months as conflict unfolded in Afghanistan and Ukraine.

“Ever since Gov. Dan Evans stood behind South Vietnamese allies fleeing their homeland after the fall of Saigon in 1975, Washington has become a steadfast supporter of our nation’s refugee program,” Inslee’s office wrote in a Medium article last fall.

Washington was one of the top states of initial resettlement of refugees in fiscal year 2019 and already has had experience helping people from Ukraine and Afghanistan. Over the past few years, these two nations had been the top countries of origin for Washington’s refugee arrivals, according to a 2021 report from the Department of Social and Health Services. Half of the state’s refugees tend to resettle in King County.

Now that Washington lawmakers have set aside funding for resettlement efforts, agencies have a few different ideas of where the money can go.

“To their credit, the Legislature approved almost all of what we asked for,” said Morrissey of Lutheran Community Services Northwest. He hopes part of the funding can be put toward lawyers and paralegals to help people navigate the citizenship process.

From Winkel’s perspective, the money may be useful on the job front. Successful resettlement, according to Winkel, includes securing housing, getting children into school and connecting people to the medical system.

“The very next thing is getting them jobs,” she said. “The funds that we get from the state in order to be able to provide job placement and, really, career services are invaluable. Absolutely invaluable.”

The domino effect caused by the conflict in Afghanistan required agencies to receive people at a scale that would have been unfathomable a year earlier. This process is not a light lift, either.

“When you resettle people, it’s not a one-day, two-day thing,” said Medard Ngueita, executive director of World Relief Seattle. “It’s months of working together. And so it is not yet over with Afghanistan.”

In May 2021, Biden quadrupled the country’s yearly refugee admissions cap to 62,500 from the 15,000 limit set by former President Donald Trump.

It takes time to build up resettlement programs, said Winkel, whose organization is increasing the size of its programs and staffing.

Unlike with the Afghan evacuation, Morrissey expects the arrival of Ukrainians to more closely mirror the typical refugee resettlement process, though he said things are moving much faster.

“Usually, it can take years before that kind of decision is made,” Morrissey said of the federal announcement to welcome 100,000 Ukrainians. “And this is just in a matter of weeks.”

Though the country will potentially need to accommodate hundreds of thousands of Ukrainians, the actual resettlement process may be less hectic than the breakneck speed required to resettle people from Afghanistan.

“Just when we were, I think, catching our breath, we’re anticipating this new wave,” Winkel said of the expected arrival of Ukrainian refugees, although much uncertainty remains around when they will come. Thousands arrived at the U.S.-Mexico border in the past few weeks.

Still, agencies may be better prepared to help Ukrainians, thanks to their efforts in the Afghan resettlement push.

The events in Afghanistan and Ukraine drew international attention, but agency leaders did not want to overlook the larger conversation about those displaced around the world.

“The refugee problem is global,” Winkel said. “And I think we can’t lose sight of that.”

Resettlement efforts must respond not just to the emerging crises of the moment, she said, but also to the broader picture.