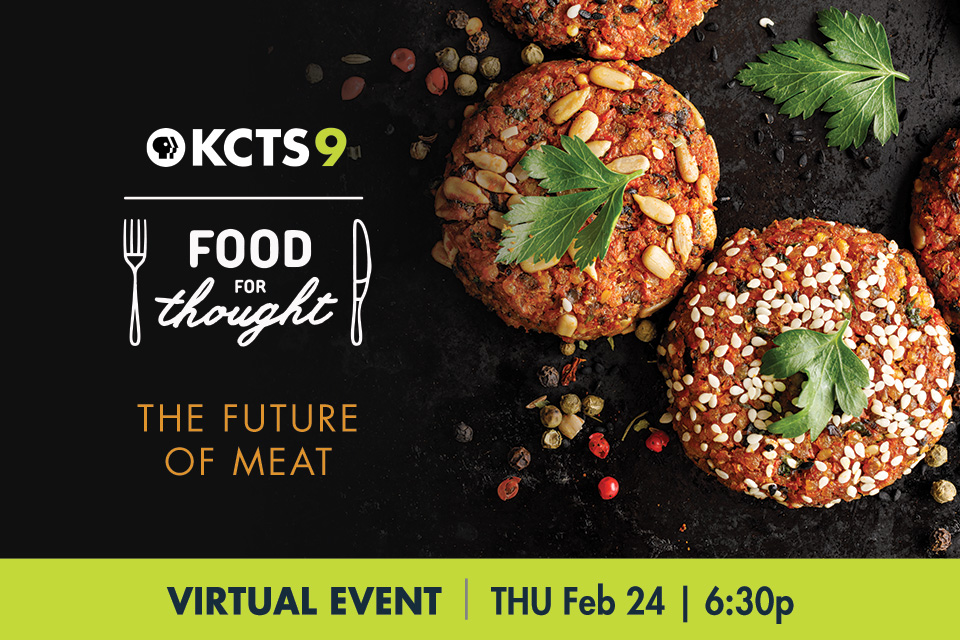 The Future of Meat

Add to Calendar 2022-02-24 18:30:00 2022-02-24 19:30:00 The Future of Meat Join KCTS 9 for a look at the ways that the plant-based movement is shaping how we view not only meat-eating but also vegetarian/veganism, specifically here in Washington State. Local chefs and restaurateurs will join Rachel Belle, host of the Your Last Meal podcast, for a look at where we’ve been and where we’re going. Virtual event Seattle, WA 98109 United States Crosscut webmasters@kcts9.org America/Los_Angeles public
6:30 PM - 7:30 PM

Join KCTS 9 for a look at the ways that the plant-based movement is shaping how we view not only meat-eating but also vegetarian/veganism, specifically here in Washington State. Local chefs and restaurateurs will join Rachel Belle, host of the Your Last Meal podcast, for a look at where we’ve been and where we’re going.

Rachel Belle (host) is an award-winning news radio feature reporter, radio host, podcast host & producer, and food writer in Seattle, Washington. In 2018 she won a national Edward R Murrow award for feature reporting and her podcast Your Last Meal was nominated for a James Beard Award. Your Last Meal has a five-star rating on Apple Podcasts & has been iTunes #1 food podcast several times. For over a decade Rachel’s been a feature reporter at Seattle’s CBS affiliate KIRO Radio, the Pacific Northwest’s most listened to news radio station, where she also hosts the popular “Ring My Belle” segment on several talk shows. Her food writing has been published in publications including Lucky Peach, Eater, The Stranger, Seattle Weekly and she has appeared on The Cooking Channel, Discovery Investigates, Lifetime and PBS.

Eric Bahn Chef and restaurateur Eric Banh has been at the helm of Seattle’s best Vietnamese cuisine for more than 20 years. Growing up in Saigon Eric loved eating good food at every opportunity and found himself curious about cooking and ingredients at a young age. At 13 Eric, his parents and four siblings immigrated to Alberta, Canada and a new culinary landscape was placed in front of him.

After moving to Seattle Eric and his sister Sophie Banh opened Monsoon in Seattle’s Capitol Hill neighborhood in 1999 to much fanfare. The flavorful, high-quality Vietnamese dishes they offered locals was unlike any other Vietnamese restaurants before them and the city quickly took notice. Years later they opened Ba Bar a casual Vietnamese street food restaurant on Capitol Hill serving again high-quality dishes with the best ingredients available for their phở, bún bowls, bánh cuốn and much more. Consistently named one of the best Vietnamese restaurants and best phở restaurants in Seattle, Ba Bar expanded to open both a South Lake Union and University Village location. And in November 2021 Eric opened 100% plant-based walk-up counter Ba Bar Green in South Lake Union, serving a vegan menu of East Asian street food.

Eric cites his late father for being his inspiration in the culinary world, naming Ba Bar after him—Ba meaning father in Vietnamese—and he enjoys sharing his learned wisdom with other young chefs encouraging them to work clean and be respectful in the kitchen. When not in the restaurant Eric enjoys cooking Chinese herbal chicken soup at home with his wife and business partner Teresa, CrossFit and playing basketball with his son.

Justin Kolbeck is co-founder and CEO of Wildtype, which is on a mission to create the cleanest, most sustainable seafood on the planet. Before Wildtype, he spent nearly five years as a consultant at Strategy& helping companies develop and launch products, grow into new markets, and operate efficiently. Justin started his career as a Foreign Service Officer, serving in Pakistan, Afghanistan, Australia, and Washington DC.  He is a graduate of the Yale School of Management, L’Institut d’Études Politiques de Paris, and UC Berkeley.

Autumn Martin began her career as a pastry chef at the world-renowned Canlis Restaurant in 2022, then moved on to become head chocolatier of the country's first organic chocolate factory, Theo Chocolate in 2004. In 2008 she founded Hot Cakes Molten Chocolate Cakery, organic dessert restaurants, and in 2016, founded Frankie & JO's, a plant-based ice cream company. Autumn loves creating for people, and is passionate about a sustainable food system, paying special attention to supporting organic farming practices and nurturing meaningful relationships between humans and the earth. She is a 4th generation Washingtonian and draws much of her inspiration from her childhood with her dad in the kitchen, the wilderness of her home, the mountains, rivers, deserts and seas of all lands. You can find her driving around in her Westfalia with her son Talon, looking for the closest surf break.