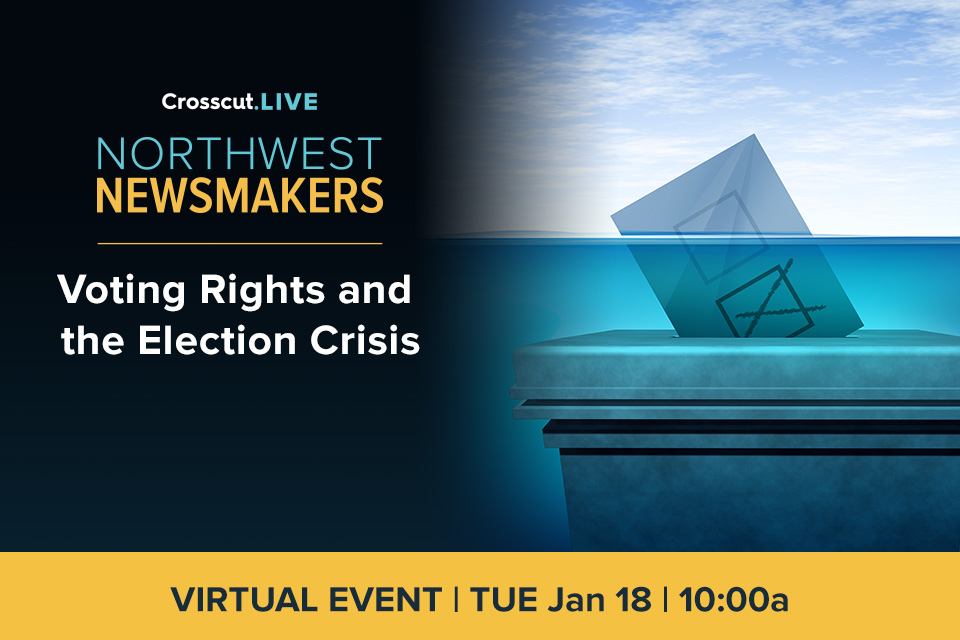 Voting Rights and the Election Crisis

Add to Calendar 2022-01-18 10:00:00 2022-01-18 11:00:00 Voting Rights and the Election Crisis Crosscut sits down with Washington Secretary of State, Steve Hobbs, to get his thoughts on the contentious debate over election integrity and how he plans to stay above the partisan fray to uphold the state’s legacy. WATCH NOW > Virtual event Seattle, WA 98109 United States Crosscut webmasters@kcts9.org America/Los_Angeles public
10:00 AM - 11:00 AM

Washington Secretary of State, Steve Hobbs, joins Mark Baumgarten, Managing Editor for Crosscut, to discuss a range of topics, including the threats to election integrity and security in Washington State, how the failure of Democrats to pass voting rights bills at a national level would affect his office, how his office locates and combats misinformation, his thoughts on Advisory Votes, how to speak to voters who don’t trust elections, the importance of education in rebuilding this trust, and the emphasis his administration is putting on expanding voting access.

Steve Hobbs is Washington’s 16th Secretary of State. Appointed by Gov. Jay Inslee. He began his tenure Nov. 22, 2021. Prior to his appointment, he was the state senator for Washington’s 44th legislative district, having first been elected in 2006. During his tenure he served as chair of the Transportation Committee, and was a member of the Business, Financial Services & Trade; and Environment, Energy & Technology committees. As state senator, Hobbs’ expansive policy agenda included local job creation through helping small businesses and improving transportation infrastructure. He promoted legislation to enhance state government accountability, and worked with the community to create new and innovative approaches to strengthening education. He particularly focused on expanding high-school and college programs that prepare students for the growing demand in the high-tech industry locally and globally. A lieutenant colonel in the Washington Army National Guard, he advocated for service members and their families by drafting policies that recognize the complex needs of men and women in the military. Secretary Hobbs received his master’s degree in public administration in 2011 and a bachelor’s degree in political science in 1994 at the University of Washington. He also holds an associate’s degree from Everett Community College.