Washington schools are changing how they teach Indigenous histories. Here's what the people who've already been through school can learn from these efforts. 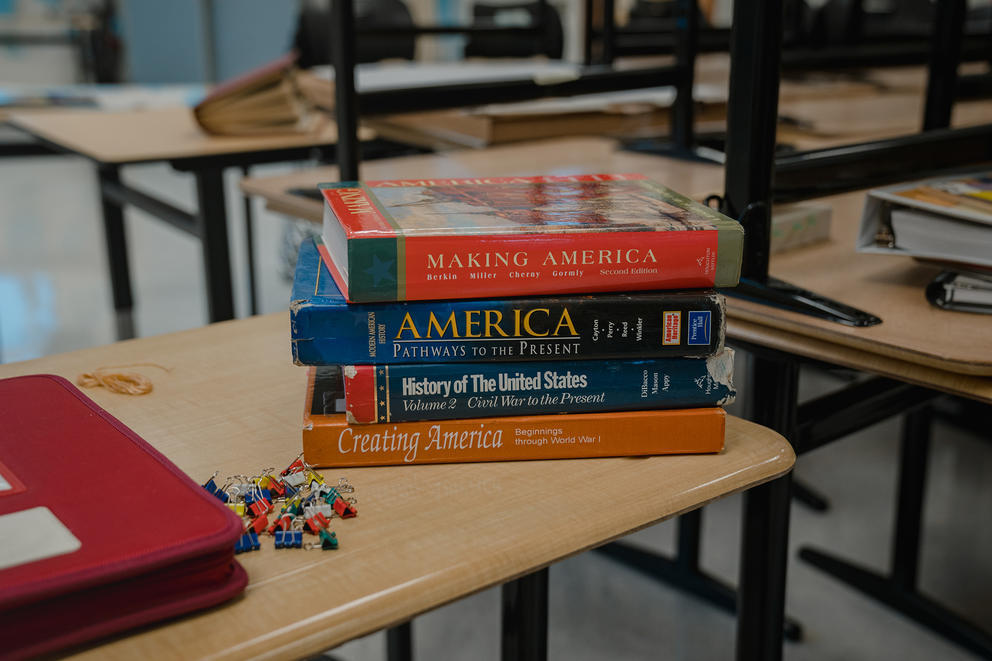 In River Ridge High School history teacher Alison McCartan’s classroom, she asks students to analyze their history textbooks and rewrite sections based on what they learn in her class about Native history. The Lacey, Wash. school is one of the first in the state to create a U.S. history class that is taught through Native perspectives. (Jovelle Tamayo for Crosscut)

Think, for a second, about the first time you can remember a teacher mentioning Native Americans in a classroom. How old were you? What was it about? How were Native people portrayed?

The first time I can remember that was in the second grade. My class was learning the story of Thanksgiving, this fantasy where pilgrims peacefully came to the Americas, shared a meal with Native people and were best friends ever since. At least, that’s what it sounded like to my kid brain when I first heard about it.

After that, it got fuzzy. The next thing I can recall is fifth or sixth grade, learning about the Trail of Tears, when the U.S. government forced Native communities to leave their ancestral homelands.

That’s a pretty big change from the first story. What was I supposed to make of that seemingly sudden shift, one that skipped over hundreds of years of history in between? I never got a complete timeline. And even in what I did get, Native people were often lumped together. As a lifelong Washingtonian, I never learned the histories of tribes across this region. I didn’t even know most of their names.

Most students aren’t taught the basics of Native history in the U.S. One recent study found that 87% of state history standards don’t include Native history after 1900, and 27 states don’t mention Native Americans in their K-12 curriculum at all. That doesn’t mean it’s never taught — you may have been lucky enough to get more information than I did as a kid — but it does mean that it’s frequently not required.

And that has a huge impact: Other studies have found that the general U.S. population sees Native people as historical, as part of the past, and know little about what they look like today. In effect, it makes Native communities invisible. It makes sense, then, that Native people frequently find themselves misrepresented in or completely absent from all forms of American pop culture and media.

In Washington, a 2015 curriculum requirement aimed at including more Native history in state education standards could help change that. I wrote about a high school class in Lacey teaching U.S. history through Native perspectives, one of the first in the state, that came partially as a result of it.

But where does that leave the rest of us? With the help of Alison McCarten, the teacher of that class in Lacey, I wrote up a quiz that you can take on Native history in the U.S. to get a sense of our readers’ own education. The quiz has eight questions, all based on lessons from McCarten’s class. It’s pretty basic stuff, asking about the number of federally recognized tribes in the U.S. for example, and includes a little about Native history in Washington.

But I get it. In lots of ways, our schools failed us from the beginning. So what do we do with this information?

Well, you can take a note from McCarten’s class and learn about Native history by looking to contemporary news and resources. You could read publications that cover Native issues that are frequently unreported elsewhere; for me, some good ones have been Indian Country Today, Native News Online and High Country News. You could listen to podcasts, like This Land, that examine how historical events impact Native communities today. You could read books by contemporary Indigenous authors. You could subscribe to a newsletter; I recently subscribed to Indigenously myself.

The bottom line: If you’re a non-Native person looking to dismantle what little we learned about Native communities in school, look beyond the stories we were told. Look for stories that don’t paint Native people as only parts of history, but as communities that continue to exist and thrive — right now, right here, today.