Robert Champagne says KOMO’s special inaccurately portrayed him. To start, he hasn't been homeless for more than three years. 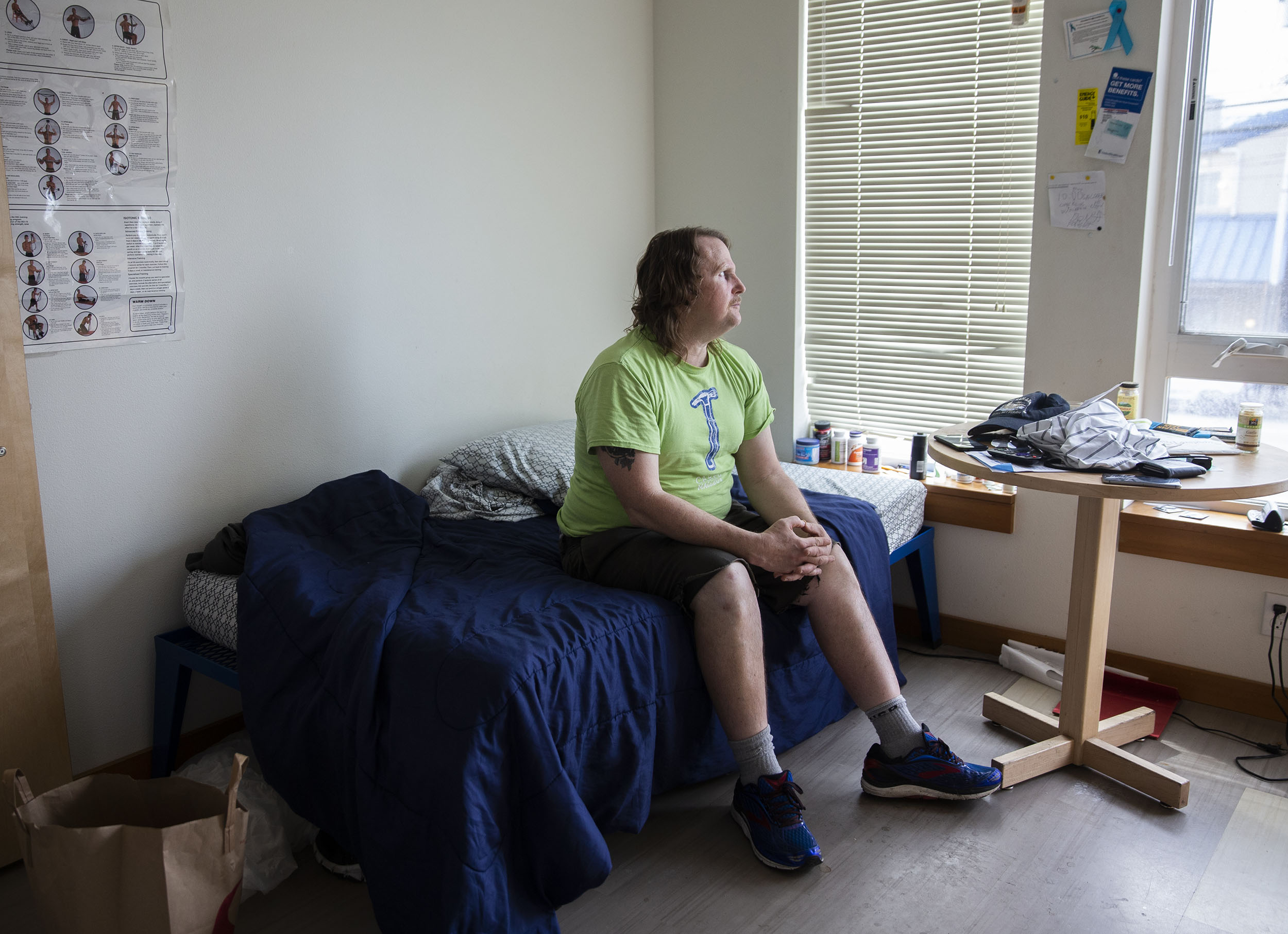 Robert Champagne looks out the window of his low-income housing studio apartment at Interbay on Friday, March 22, 2019 in Seattle. Champagne was among the people filmed for a KOMO special titled "Seattle is Dying," which aired this month. (All photos by Lindsey Wasson for Crosscut)

When he was shown the video for the first time, Robert Champagne was unsure if the person on the screen was really him. But then he recognized the teal-green shirt he was wearing when the film crew from KOMO TV trained their camera on him. He pulled the same shirt from his closet and laid it on his bed. “It is me,” he said.

Champagne appears several times in the latter half of the hourlong television special, called Seattle Is Dying, which was filmed over the past year and aired earlier this month on the Seattle station. He is never interviewed, but he is shown multiple times, either sitting on the sidewalk or bracing himself against newspaper boxes downtown, a Target bag at his feet containing the bottle of laundry detergent he’d just bought.

He, like many other people filmed by the news team but never spoken to on camera, is assumed to be homeless. As the camera focuses on him, KOMO reporter Eric Johnson says, “This man, in the downtown core of our city, was suffering, in distress. Once he fell down he couldn’t get back on his feet again, so he sat there for a long time.”

Champagne struggled to explain why he was sitting on the street that day. It may have been because he sometimes suffers from sciatica — a shooting pain in his back and legs radiating from the sciatic nerve. In fact, his former case manager, Howard Bess, said that at one point a doctor advised Champagne to use a walker.

“If you take any number of folks who need a walker and set them up on a sidewalk, see how they get up,” said Bess.

Champagne has been homeless before — chronically so, in fact — but he is not homeless now. For 3 1/2 years he’s lived in a small apartment in Interbay, across the street from Whole Foods. His building is called Interbay Place and is one of the Downtown Emergency Service Center’s permanent supportive housing projects, which means staff is available at all hours. He pays $265 a month to live there, a sum paid from the disability checks he receives as a result of a bipolar diagnosis.

In some ways, what KOMO captured was actually a success for Champagne: He'd traveled the two miles to Target that day to buy his detergent. It was an act of independence and the culmination of years of work from a team of case managers who had gained his trust, brought him inside and built a community of support around him.

But that’s not the person Champagne saw in the clip.

“It makes me look like a waste case,” he said. “When someone says that I’m like that most of the time, it offends me, it really does,” he added. “It really does. Because that’s not who I am.”

Champagne is originally from Louisiana. From 1994 to 2000 he traveled north and west to Petersburg, Alaska, to work in the fishing industry during the summer, mostly processing fish. He would live at home with his parents between seasons.

Things got difficult in 2001, beginning with the death of his mother in February. He drank more heavily and took more opiate pills in the aftermath, which led to a fight with his father, who kicked him out. He would be homeless for many years after, still taking pills and using small amounts of heroin.

Champagne moved to Seattle, a place he’d come to know when traveling to Alaska, in 2009. When Bess, the case manager at DESC, first met him several years later, he said that Champagne struggled with delusions.

“We started out on a very low level of reinventing himself and feeling comfortable in the community,” said Bess. “He was generally curled up in the fetal position somewhere, afraid.”

It took six months to gain Champagne’s trust enough to begin discussing options for housing and benefits, said Bess. But as that trust built, they began talking about alcohol and substance abuse management, food stamps, Social Security. There were struggles, to be sure — emergency rooms hesitated to give him medication for his sciatic pain out of fear he would abuse the pills. But together, said Bess, they were making progress.

In 2015, Champagne moved into Interbay Place, one of more than a dozen permanent supportive housing projects managed by DESC, a nonprofit service provider in Seattle. The facilities are geared toward those considered the hardest to house, often with mental health or substance abuse issues. The philosophy is to achieve housing first so everything else is more manageable. 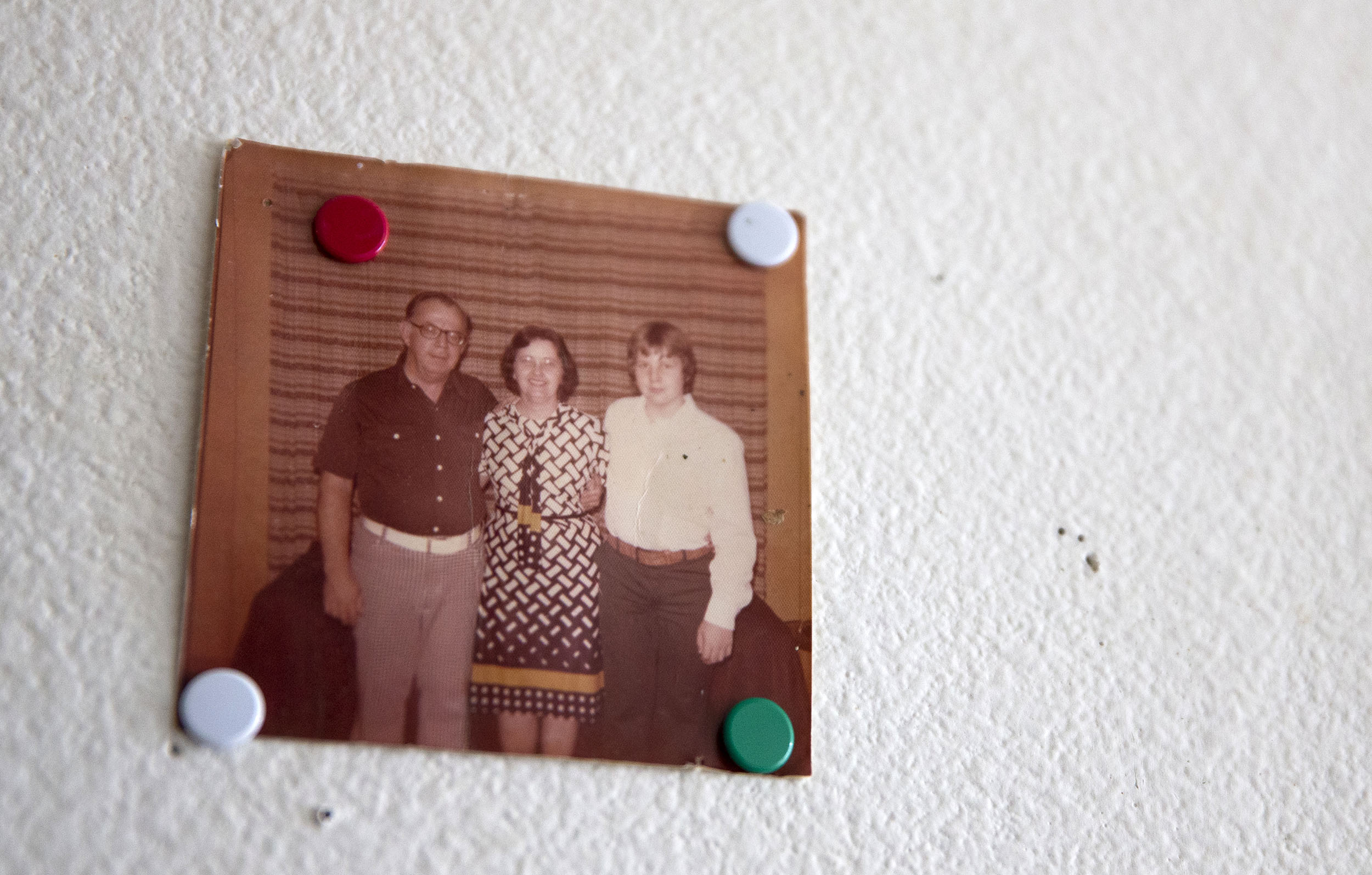 The Interbay Place building on the east side of 15th Avenue blends in with the boxy architecture that dominates most new construction in Seattle. It has a courtyard, meeting areas and 97 apartments.

Champagne said his hall is quiet, which he appreciates. His apartment is smaller than a hotel room, but has its own kitchenette. He gets good light in the afternoon from a west-facing window. The noise of cars below doesn’t bother him much.

His voice is scratchy and he rarely sits still, swiping away his long hair or tugging at his ear. He shows flashes of anger occasionally, but quickly apologizes. The sciatica that once bothered him so much hasn’t flared up as much lately, he said.

Since Champagne moved in, Bess has seen nothing but progress, albeit incremental. “His hygiene has improved consistently,“ he said. “He combs his hair, he brushes his hair. He’s looking at being a better human being.” Bess remembers how happy his client was when he first got his own set of keys.

Champagne said his apartment has made him feel “pretty much stabilized. … Every day’s the same. I’m not needing of anything.” Six days a week, he takes the D line bus from near his apartment to the SoDo neighborhood, where he receives a dose of methadone for his addiction. He heads downstairs to eat most of his meals, which are provided by staff. Sometimes, though, he’ll drink coffee and eat oatmeal in his room.

Over  images of Champagne sitting on the street, KOMO’s Johnson says, “Sooner or later they die on the streets, in tents or in low-barrier, tiny houses. To leave them alone is to shame ourselves and that’s why they need help.” In reality, Champagne has received — and continues to receive — help.

But for Bess, the success of grocery shopping at Target is undercut by the language and context of KOMO’s piece. “The point of view that was done was completely wrong,” he said.

Permanent supportive housing is far and away the preferred solution to chronic homelessness, said Daniel Malone, DESC’s executive director. “It’s a highly desirable intervention for folks because it’s what they want,” he said. “They want housing. It just so happens that it’s housing that’s designed for people who have a lot of needs and need a lot of support.”

As proof of just how much people want housing, Malone points to the opening of 1811 Eastlake in 2005, a DESC permanent housing project that caters to people with chronic alcoholism. DESC filled all 75 slots after speaking with just 79 chronically homeless people. Even the four who did not accept would express interest later, Malone said.

The restraints on developing permanent supportive housing are time and money. Malone said opening such a facility takes 2 1/2 to three years, from planning to opening. Development costs of Interbay were $20.1 million, but it’s also a significant expense to maintain operations.

The city currently has several thousand permanent supportive housing units like the one that Champagne calls home. Malone estimates Seattle needs at least 4,500 more. That could cost up to a billion dollars, he said.

At the same time, it likely costs the city and region about the same amount in emergency resources to respond to homelessness, Malone said. The challenge is connecting the cost of building supportive housing to the cost of not building it.

Since its airing, Seattle is Dying has generated impassioned response throughout the region and well beyond Seattle. It’s been shared thousands of times and viewed by millions. Papers in Tacoma, Portland, Sacramento and elsewhere have written about it. Sarah Palin, onetime Republican nominee for vice president, said it showed “our beautiful Emerald City succumbing to socialist policies.” Former Arkansas governor and TV personality Mike Huckabee called it “must-see.” Virginia Attorney General Ken Cuccinelli used it to compare Seattle to Venezuela.

Meanwhile, Champagne is working to maintain his normalcy. “I want to just be the best I can be and live as most optimally as I can,” he said. 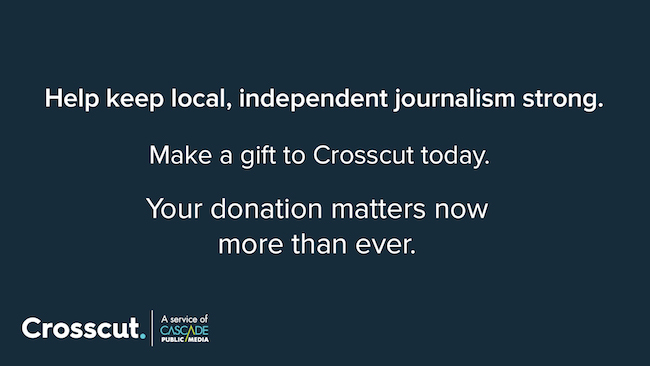 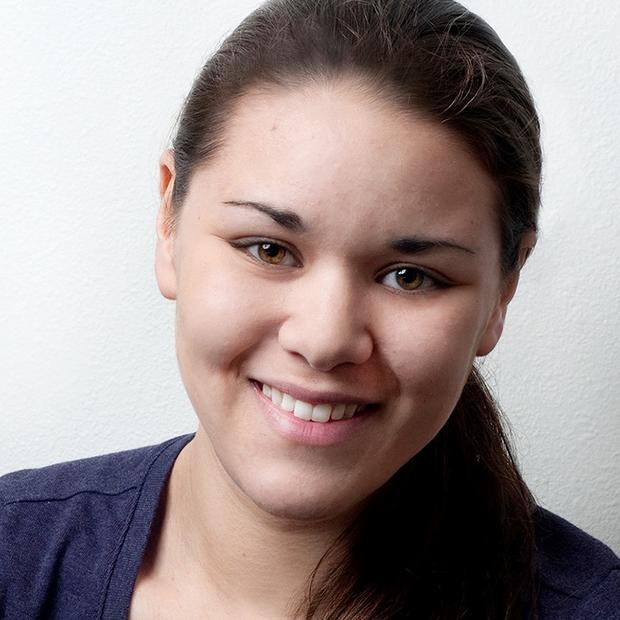