Washington schools are reinventing what it means to be a bus driver — or deciding whether they can keep them at all. 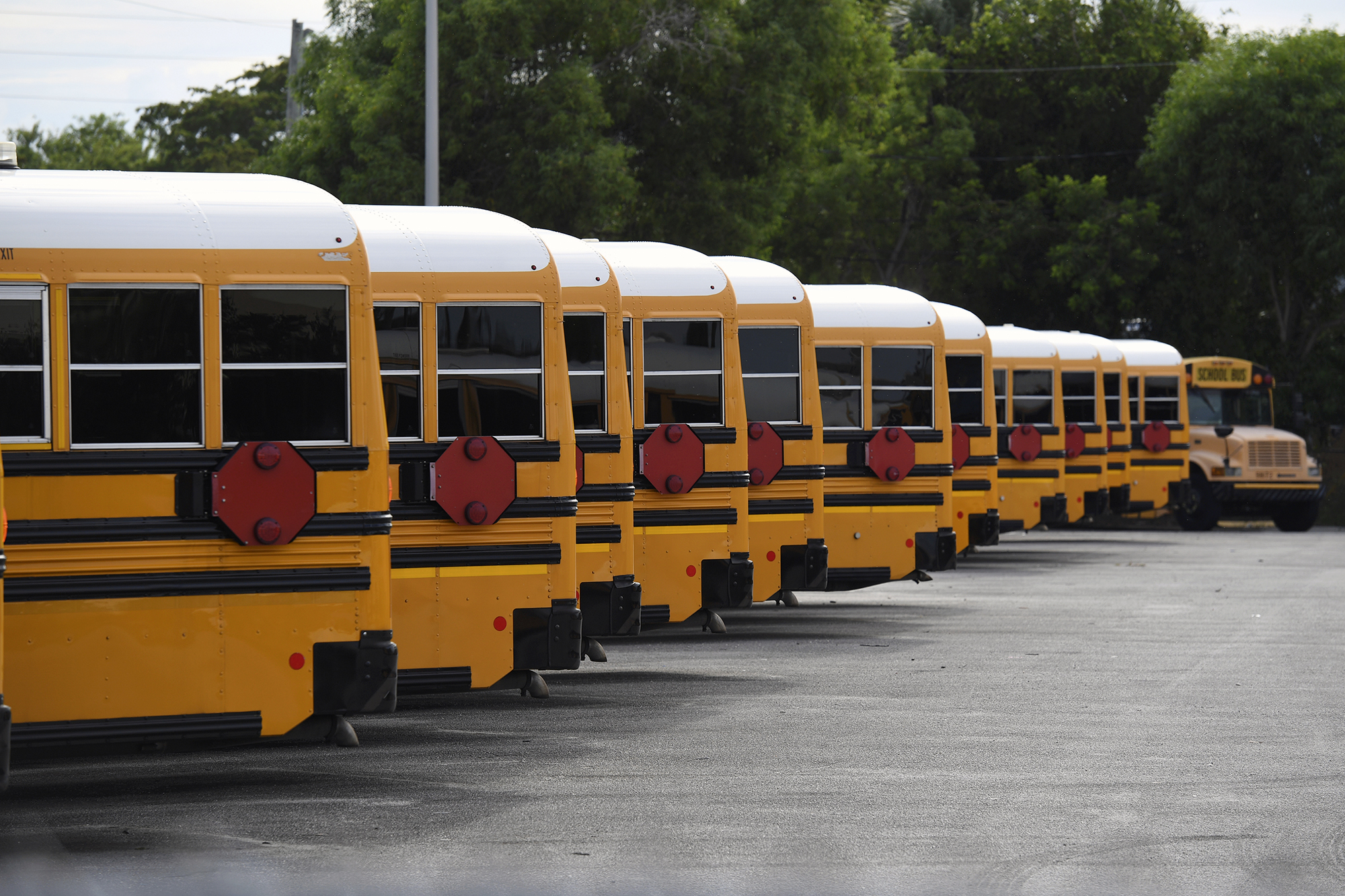 With schools moving to all-remote learning or hybrid approaches as precautions against COVID-19, many school bus drivers are facing changes to their job or potential layoffs. (mpi04/MediaPunch/IPX/AP)

The layoff notices came to bus drivers a little over a week before school started in the Central Kitsap School District. It wasn’t a surprise to Allison Ruiz. She had been worried about what the pandemic would mean for her job since last spring.

Even so, Ruiz had hoped the district would figure something out. She has three kids in school and takes care of her father and her husband, both of whom are disabled. The job was necessary. And suddenly, it was gone.

“I saw it coming, but it was still kind of a shock,” she said. “I thought our district would find a way to use us.”

Of the 82 bus drivers in Ruiz’s district, 72 were laid off. None are sure when their jobs might come back. The district says classes will be fully remote for at least the first nine weeks of this school year.

When schools reopen, Ruiz is not sure who will be back to drive kids to school — herself included.

“They will not all come back, I’m telling you right now — I know at least 20 that aren’t coming back,” she said. “What happens when we reopen and there’s 15,000 kids that need to get to and from school and there’s [fewer] people to do it? What’s going to happen to our system?”

Ever since the coronavirus pandemic hit Washington last spring, schools have been in tumult. Educators spent the summer coming up with more efficient ways of teaching virtually, while administrators struggled to settle on a plan for the 2020-21 school year. Those plans were in flux until the last minute.

For education workers whose jobs hinge on in-person interaction, that has meant either repurposing their skills or having their jobs cut entirely. School bus drivers are a special case since there’s long been a shortage of drivers throughout the state, and districts have worked hard to recruit them. Training a driver can take weeks, especially because they’re tasked with caring for students, as well as driving them.

The state typically distributes school transportation funds  based on the number of students using buses. Right now, few students are riding buses in Washington or anywhere.

Superintendents in dozens of school districts wrote to Gov. Jay Inslee in early August asking him to change this budget formula. Inslee responded with an emergency action in late August that allowed schools to receive transportation funds if drivers were fulfilling other purposes, like driving out buses equipped with Wi-Fi hotspots or delivering school meals and materials to students.

It’s a temporary fix. Schools will need money to pay drivers and gas up and service buses when schools eventually reopen. A budget fix by the 2021 Legislature will be essential and complicated. Chris Reykdal, superintendent of the state Office of Superintendent of Public Instruction, says schools will need their transportation dollars restored, plus extra money to address new needs — like internet access at home — to accommodate remote learning.

“So, for example, they allow us now to have a bus driver deliver food — which is great,” Reykdal said. “But there are other districts who say that we could have bus drivers monitoring small groups of students in learning, or we could have them for family engagement, making phone calls … and those still aren’t allowable.”

Some districts have taken advantage of transportation dollars to get creative but, eventually, they will need those dollars to do their old job again.

Sherri Ehrenheim, a University Place school bus driver, will be delivering meals to students for the next few weeks. After that, she said schools in her area might start bringing small groups of students back to school in person. Even though her school district is smaller than some — it serves about 5,000 students — she said that it’s important to keep drivers so that when students need to go back to school in person, the district won’t have to hire an entirely new staff.

“Districts are always, always, always in need of bus drivers,” Ehrenheim said. “Our district knows that and is doing everything they can … to keep us employed.”

Even with giving bus drivers new tasks, some districts have been unable to keep all their drivers. Tessie Long, a driver in South Kitsap, says of the 118 school employees put on standby in her district, 82 were bus drivers like herself. She has worked for the district for more than two decades and, as a result, is higher up on the list of employees prioritized for rehiring. Knowing this, Long isn’t rushing to find another job yet, but she worries for those who might have to wait even longer.

“I’m in no position to refuse,” she said. “But I feel bad for the next driver who might be in line.”

It’s frustrating for Ruiz. In her home, her kids take turns using the internet for their school work since it’s too slow for them to all use it at the same time. They also haven’t received their paper learning materials yet. She wonders why school bus drivers couldn’t start offering some help to alleviate that by delivering materials or Wi-Fi hotspots.

Last Friday, Ruiz and other drivers protested the cuts in their district. The district hasn’t changed its decision, but she said she’s willing to wait at least the first nine weeks to see if they will. If they rehire bus drivers, she’ll gladly be back. But as the sole provider for her family, she knows she’ll have to look for work elsewhere after that.

“I can’t sit around and wait,” she said. “If it gets much longer than that, I’ll have to do what I have to do to support my family.”