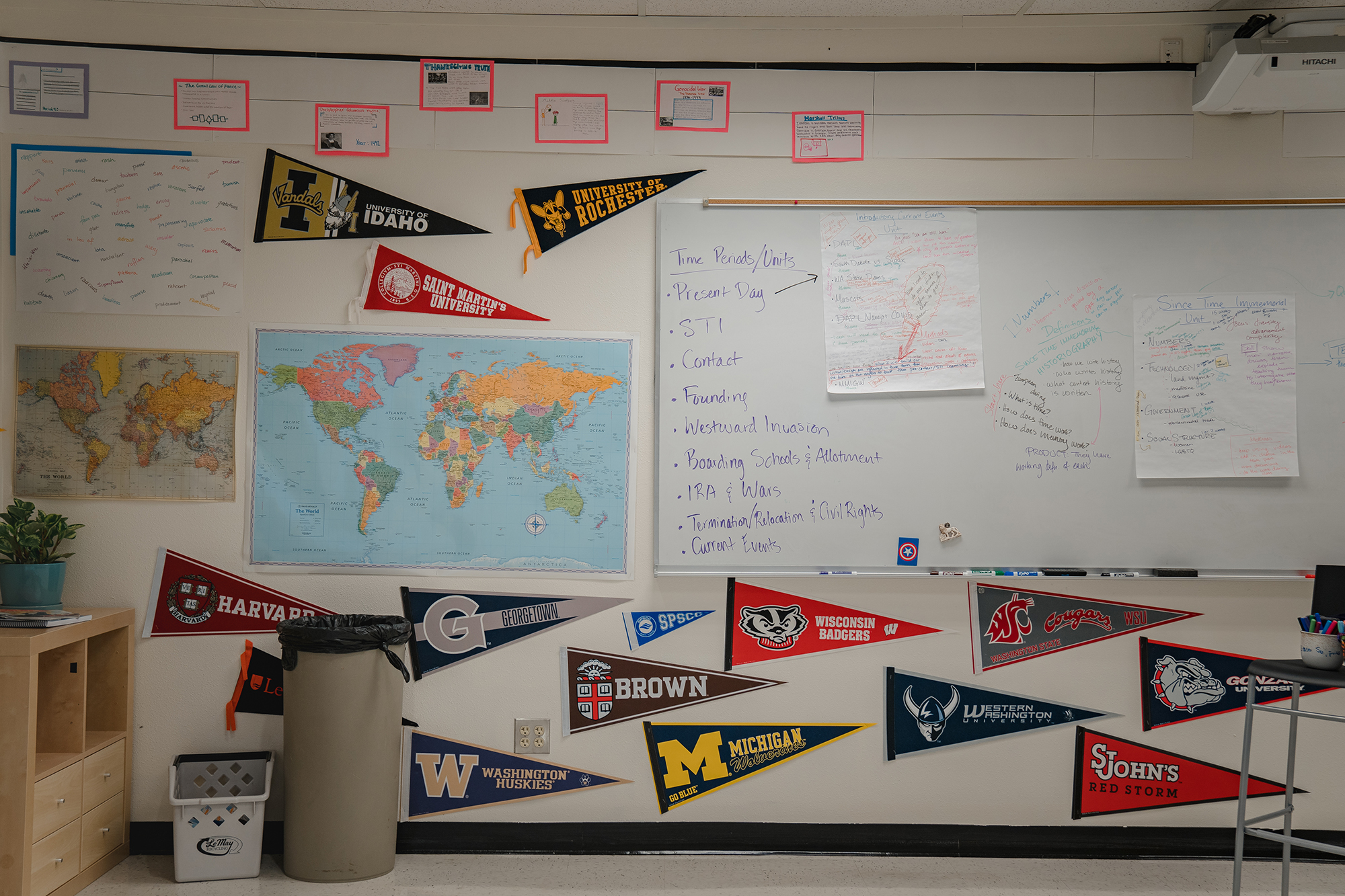 .The walls of history teacher Alison McCartan’s classroom at River Ridge High School in Lacey, Wash., Nov. 12, 2020. Schools across the state have used combinations of distance learning and hybrid learning since the pandemic began. (Jovelle Tamayo for Crosscut

Gov. Jay Inslee on Wednesday set a clearer path toward reopening Washington public schools, beginning with in-person learning for elementary students in areas where new cases of the coronavirus have dropped below a daily average of 350 cases per 100,000 residents.

Schools are being encouraged to reopen elementary learning in small groups of 15 students or fewer, as long as they also follow all the existing health and safety rules such as physical distancing and mask wearing.

For places in Washington averaging fewer than 50 new coronavirus cases per 100,000 residents, school districts are being advised to begin in-person learning at all grade levels, as long as required safety measures are in place.

“It is time to begin the process of getting more of our students back in the classroom,” Inslee said, acknowledging that school opening and closing decisions remain in the hands of local officials.

The governor's new guidance is significantly less strict than the previous state advice, which said Washington should keep schools closed, or open them in a very limited way, unless disease rates dropped below 25 new cases or lower.

State laws give local school boards authority to make their own decisions about opening and closing public schools. Since March, most, but not all, Washington public school buildings have been closed and learning has taken place online. The governor said an estimated 15% of the state’s 1.2 million K-12 students are receiving a form of in-person learning right now.

In King County, where there have been 54,795 confirmed cases, 3,748 hospitalizations and 928 deaths, most school districts have kept learning remote for most students this fall.

The governor recommended that reopening should start with younger students and those with the highest needs. Since high school and older students are more similar to adults in terms of how they can catch and transmit the virus, they should be among the last groups to return to in-person learning, the governor said.

He asked school districts to also prioritize students with the most academic needs, including those just learning to speak English, students with disabilities and those struggling to keep up with their classmates online because of either academic or emotional difficulties.

Superintendent of Public Instruction Chris Reykdal encouraged school administrators and union representatives to sit down immediately to talk about how their districts can reopen, noting that online learning isn't working for all students.

“We are in the business of serving young people and they need us right now,” Reykdal said. “And we can do this safely.”

The president of the Washington Education Association, Larry Delaney, said it would take time to make sure schools are ready to open safely with enough protective equipment, good ventilation, a plan for contact tracing and testing, and a way for students and teachers to stay physically distant.

“The trust and confidence that we can safely return to school is something that must be earned," the teacher's union president said. "It would have been easier to build that trust with educators with more communications in advance from the Governor about these pending changes."

Inslee said he and his advisers had been waiting for clear evidence that schools can be opened safely during COVID-19. He acknowledged during the Wednesday news conference that research scientists have been tracking school safety for months, but said he needed to look at multiple scientific evaluations before pushing schools to reopen. For example, Harvard came out with safety recommendations for safe school reopenings in July.

But the most compelling evidence on the governor's desk consisted of reports from districts across Washington that have opened safely, information he called pleasantly surprising.

Lacy Fehrenbach, the state’s deputy secretary of health for COVID-19 response, said it is imperative that others in the community remain vigilant in their daily safety practices so that their local schools can reopen and stay safe. That means wearing masks and continuing to practice social distancing, she said.

“This will help us get our rates down and get more children back in buildings sooner,” Fehrenbach said.

Until the governor’s announcement this week, guidance about school safety around the coronavirus has mostly come from the Office of Superintendent of Public Instruction. Reykdal, the state schools chief, can only guide — not order — school districts. But that doesn’t mean his guidance has been insignificant.

For example, this past summer and again in October, OSPI advised schools that they should not be counting absences from online learning as evidence that a student is truant. No matter how many times a student misses online classes, those absences should be counted as excused absences, according to an OSPI memo. This is significant because Washington law requires school districts to report students to the juvenile court system if they have seven unexcused absences in one month or 10 in an academic year.

OSPI guidance for Washington school districts deciding whether to reopen their classrooms advised districts to keep schools closed until positive COVID-19 tests dropped below 5%, and both cases and hospitalizations were on a downward trend.

In communities with low coronavirus rates, OSPI recommended a phased-in reopening, starting with elementary schools. The state education department said middle and high schools shouldn’t be reopened until the district can track the impact of elementary school reopening.

The OSPI reopening guide notes that local health officials can overrule school districts if they believe in-person learning is causing an uptick in coronavirus cases in the area.

Other states started reopening schools after COVID cases started to drop. Washington has seen an uptick of cases, but not in every part of the state. Oregon health officials recommend students return to kindergarten through third grade classrooms if COVID-19 cases are fewer than 60 cases per 100,000 over a 14-day period and test positivity is less than 5%. Minnesota set the line at 100 cases per 100,000 over two weeks, but only elementary schools are fully in-person.