Despite rampant speculation, the high-profile city council member will eye a second term. 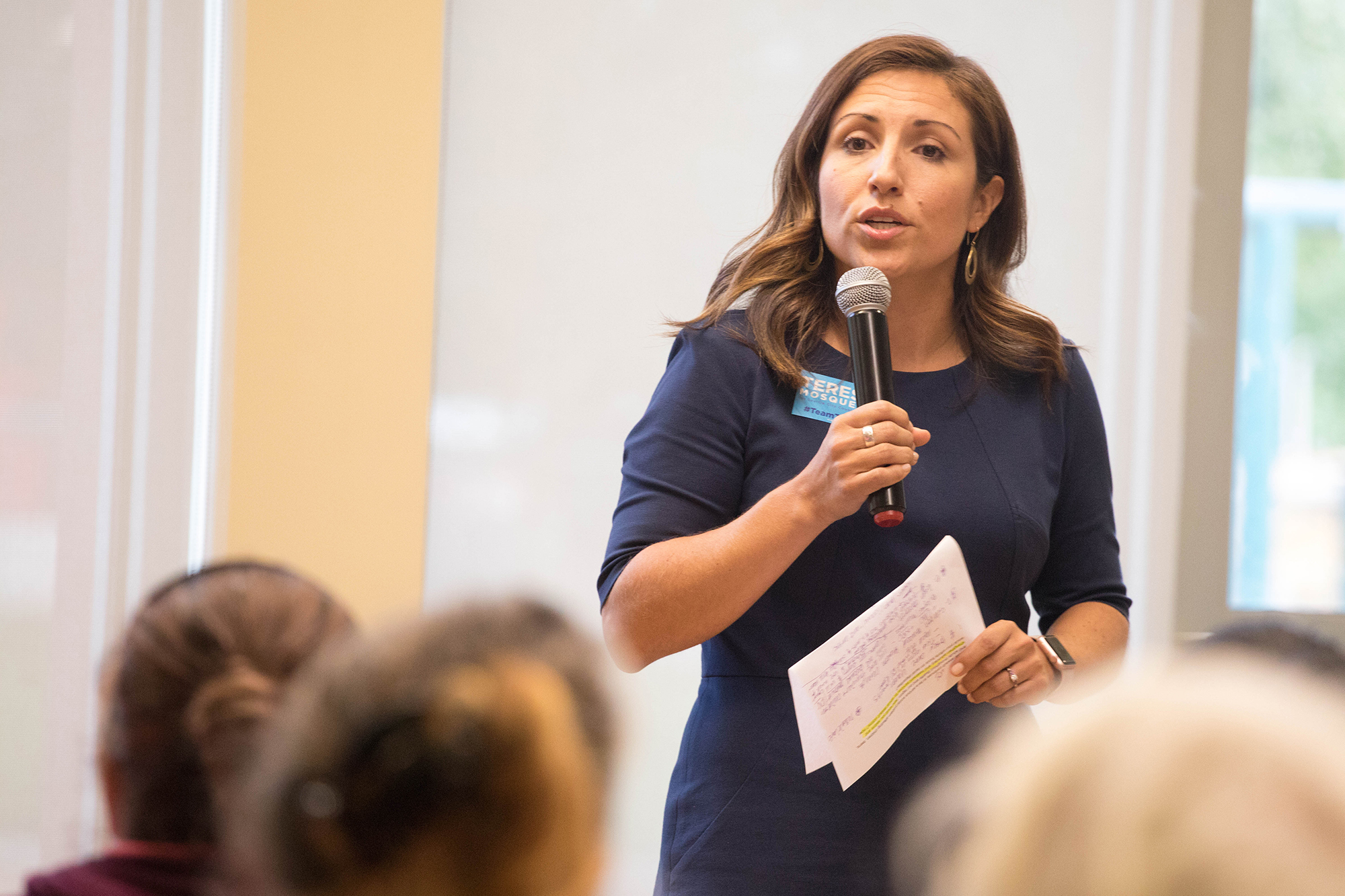 Teresa Mosqueda will run for a second term as a citywide representative on the Seattle City Council, shutting the door on long-simmering rumors that she would seek the mayor’s office next year and officially kicking off Seattle's 2021 election cycle.

Mosqueda's first term was defined by her advocacy for new taxes on large businesses, rights for domestic workers and, more recently, a new system of public safety. In a second term, she said in an interview, she wants to lead the city's recovery from the COVID-19 pandemic by supporting small businesses and child care centers, while at the same time reexamining the city's zoning laws and alternatives to policing.

The issues in many ways are the same as when she ran the first time, she said. But the pandemic has only made them more stark.

"In some ways the world is different; in other ways, it’s more in our face, it’s front and center," she said. "We can no longer ignore the inequities between the largest companies who are raking in billions of dollars in a post-COVID world and our small businesses that are sitting shuttered on the corners of our neighborhoods."

Mosqueda's declining to seek higher office — for now — could clear the path for other possible, labor-friendly mayoral candidates who occupy a political lane between Mayor Jenny Durkan and Councilmember Kshama Sawant, most notably her colleague, Council President Lorena González.

Mosqueda comfortably won her race in 2017 on a labor- and renter-friendly platform, beating an opponent to her left. Although she was not on the ballot in 2019, candidates who ran in a similar mold — Andrew Lewis and Dan Strauss, in particular — repeated her success.

But 2021 is shaping up to be a different landscape than 2017. The pandemic has transformed the city’s downtown core and its government’s budget. More than that, Mosqueda has centered herself in the heated debate around the future of policing in Seattle. She was among the earliest voices on the council calling for the Seattle Police Department’s budget to be cut by up to 50%. As the leader of the council’s budget discussions in the fall, Mosqueda and the trajectory of her political future are now closely tied to police reform more broadly.

Mosqueda continued to stand by her advocacy for a new system of public safety, which she said included upstream investments. At the same time, she left the door open for people who disagree with her.

Mosqueda’s name has consistently topped lists as a potential progressive challenger to the more moderate, business-backed wing of Seattle politicians who have held the mayor’s office since 2014. That murmur grew louder over the summer as Mosqueda excoriated Durkan’s handling of the protests and suggested the mayor consider resigning.

Mosqueda considered jumping in, but the stakes of running for mayor were particularly high for her. Unlike the seven district-based seats on the council, the races for the two citywide positions coincide with the races for mayor and city attorney. As a result, Mosqueda needed to choose between running for mayor or for a second term in her current seat with the advantage of incumbency.

Mosqueda came to the Seattle City Council from the world of labor, state politics and health care policy. She holds a master’s degree in public administration and rose to become the head lobbyist at the Washington State Labor Council, AFL-CIO, working on expanding Medicaid and implementing Obamacare in the state.

In 2018, Mosqueda was one of only two council members to vote against repealing the infamous “head tax,” joining Sawant and castigating the business-backed opposition to the measure. This year, Mosqueda pushed the council toward passing an even larger payroll tax on large businesses, namely Amazon — achieving the long-sought progressive goal of forcing the e-commerce giant into paying more.

Mosqueda cemented some of her progressive bona fides over the summer, when she firmly took the side of the protesters, appearing at a demonstration and harshly criticizing police use of less-lethal weapons. In subsequent council meetings she attacked Durkan by name and suggested that she consider resigning — short of a demand, but one of three council members to raise the idea.

Mosqueda pledged that she would be “following the lead” of groups such as King County Equity Now and Decriminalize Seattle, which have both called for cutting the Police Department’s budget by 50%. Although the council did not execute on those cuts in the latest round of budget talks — which Mosqueda led — she promised this year’s cuts of nearly 20% constituted a “down payment” on a dramatic overhaul of public safety.

Mosqueda’s work on police and taxes has delighted progressives. But, heading into her reelection fight, that same work will also be a first test of those priorities’ popularity in Seattle. Polling has consistently shown that voters are at best ambivalent on the idea of cutting Police Department budgets and often outright oppose the idea. The backlash has already been formidable. Seattle Police Chief Carmen Best quit in response to pledged cuts, saying she did not want to execute layoffs. And a recent piece from KOMO news blamed Mosqueda and the council for handing the “soul of Seattle” over to criminals.

On taxes, groups like the Seattle Metropolitan Chamber of Commerce have accused the council of kicking businesses while they’re down during a pandemic. The chamber has filed a lawsuit seeking to repeal Mosqueda’s signature policy achievement.

With Mosqueda bowing out of the mayor’s race, more eyes will turn to Council President González, whom consultants and current and former City Hall sources widely assume will run. González has flashed her political ambitions in the past, coming within hours of running for mayor in 2017 and briefly announcing her intention to run for state attorney general before Bob Ferguson decided to seek another term. González could make an announcement as early as this week.

The head of the Chief Seattle Club, Colleen Echohawk, is likely to run as well, according to sources familiar with her thinking. Echohawk, an enrolled member of the Kithehaki Band of the Pawnee Nation and a member of the Upper Athabascan people of Mentasta Lake, has for years worked on homelessness and housing issues in the city, both within her own organization, but also in City Hall more generally. She has shown a knack for floating between political circles and could lay claim to the mantle of consensus politics that worked well for Durkan.

Several other names have circulated recently, including former state legislator Jessyn Farrell; Brady Walkinshaw, the CEO of Grist.org and a former state legislator; and Durkan’s deputy mayor, Casey Sixkiller. Scott Lindsay, who served as a public safety adviser to former Mayor Ed Murray and is now a leading advocate of the city taking a harder line on low-level offenses, is also considering a run.

On the progressive end, plenty of advocates have called on Nikkita Oliver to take another shot and Oliver is believed to be considering a run. The attorney and activist ran in 2017, but their profile has risen even further since then, in part because of their visible presence and speeches at protests.

So far, however, few candidates have made official declarations, likely treading water until the new year, when the rush for attention — and donors — will begin in earnest.