State officials are investigating suspicious test results, with a focus on the lab’s numbers measuring the potency of marijuana. 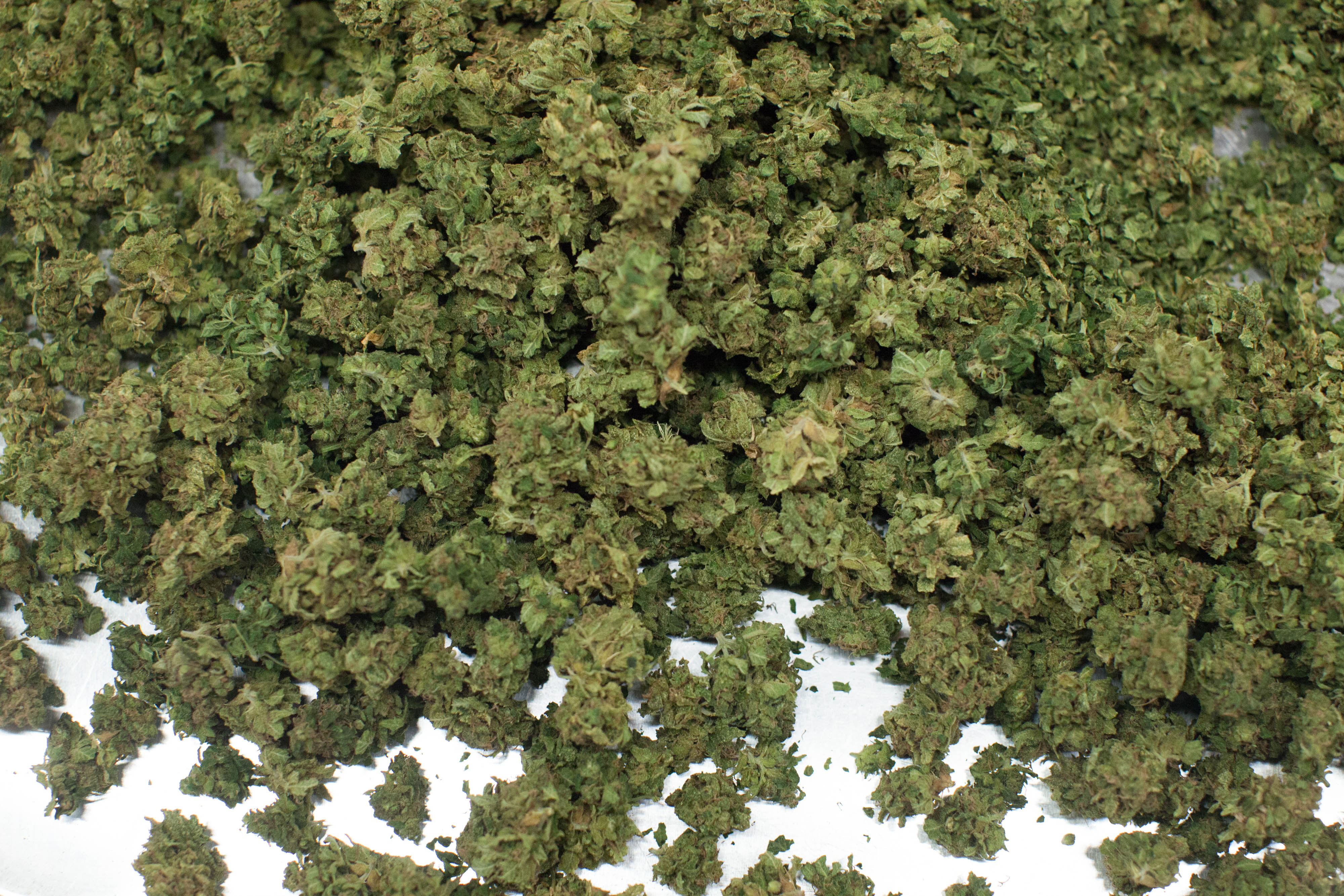 In this file photograph, trimmed cannabis flowers are seen at a marijuana production facility in Seattle during 2017. (Matt M. McKnight/Crosscut)

Data analyst Keegan Skeate agonized for more than a year about telling the state about some suspicious test results at a marijuana testing lab.

In a converted 107-year-old former bank building in Centralia’s quaint downtown, Praxis Laboratory tested pot from growers across the state. Small samples of marijuana flowers would arrive in baggies. Maybe 4 grams or so from every few square feet of leafy canopy.

Lab technicians would take 0.25 to 0.35 gram of marijuana flower and mixed it with reagents that separate different biochemical components of the pot in a liquid solution.

On a night shift in April 2018, a lab technician told Skeate that the THC figures recorded in Praxis’ official paperwork for a major client were not the same numbers she entered into the computer after testing. While this bothered Skeate, he wanted to give the lab’s management the benefit of the doubt.

Skeate’s doubts conflicted with his loyalty to the lab. What if he was being too skittish about what he suspected was happening? He didn’t want to jeopardize co-workers. Going to the state is scarier than it sounds. But what about Praxis’ clients and those clients’ customers being fed false information?

Skeate kept his eyes open and, every now and then, similar discrepancies would show up between THC results reported to Washington’s Liquor and Cannabis Board’s marijuana testing database and what was sent via paperwork to the growers. “It just happened too many times,” Skeate said.

What appeared to be happening was that the weights of the marijuana samples were being changed — making the weights smaller so the concentrations of THC would appear larger.

Skeate wanted to be sure that the changes were intentional, not honest mistakes. 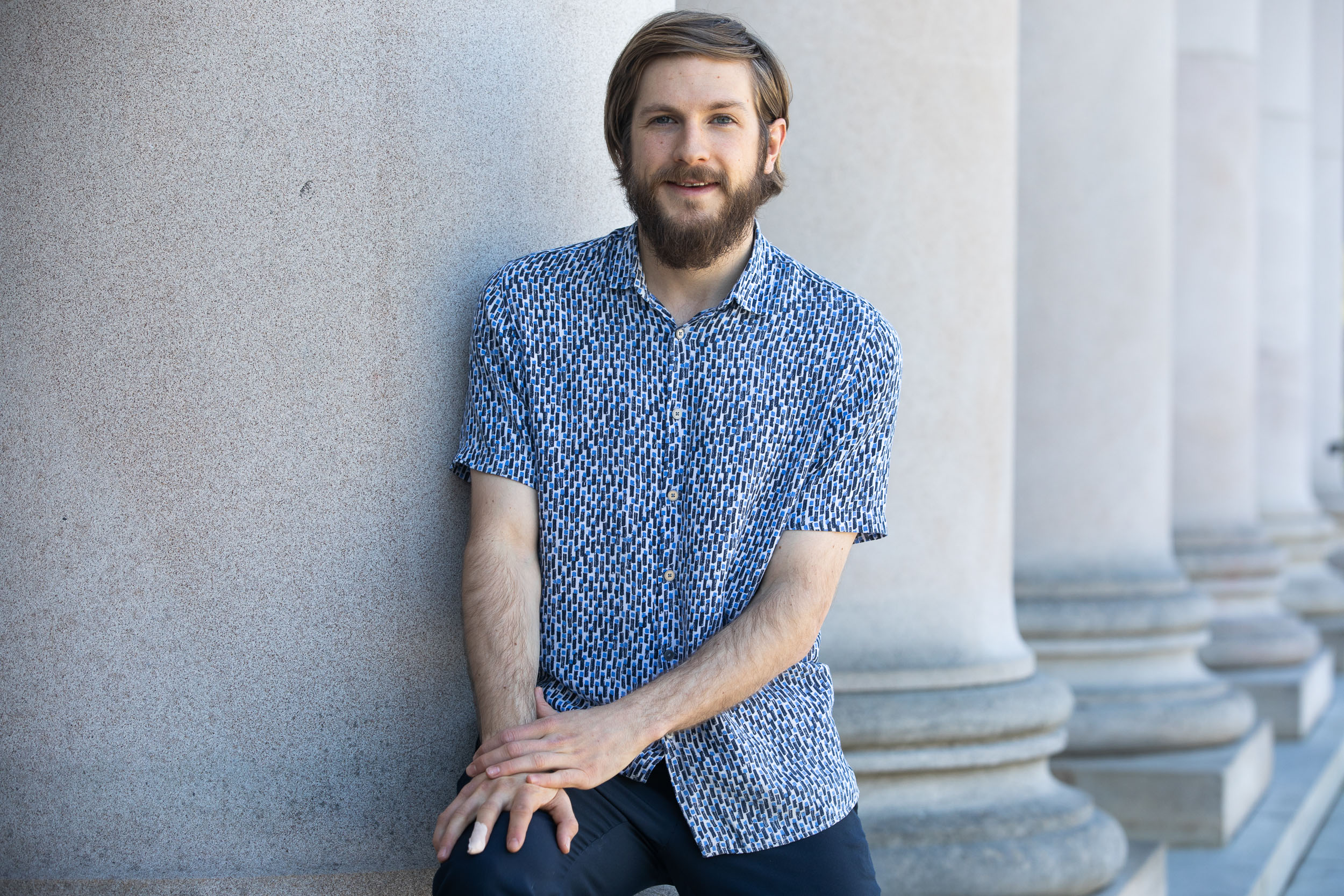 Keegan Skeate, a whistleblower who supplied information to Washington Liquor & Cannabis Board that Praxis Laboratory, a well-known marijuana testing lab, was changing its testing results. Photographed at the Washington state Capitol building in Olympia, on April 14, 2021. (Matt M. McKnight/Crosscut)

Keegan Skeate, a whistleblower who supplied information to Washington Liquor & Cannabis Board that Praxis Laboratory, a well-known marijuana testing lab, was changing its testing results. Photographed at the Washington state Capitol building in Olympia, on April 14, 2021. (Matt M. McKnight/Crosscut)

In January 2020, he secretly set up a software program that recorded and dated every version of lab results stored in Praxis computer system. That surveillance program revealed THC results had been altered a few dozen times after the lab technicians entered the data.

“It became clear that the results were changing,” Skeate said.

Skeate approached the Washington Liquor and Cannabis Board in April 2020 with his suspicions. Meanwhile, his software kept a close on eye on the altered testing data.

In a December 2020 liquor and cannabis board staff memo, Skeate shared evidence that Praxis changed the weights of more than 1,000 marijuana samples in June, July and August of 2020. More than 99% of those samples showed decreased weights, making the THC contents appear larger. Statistically, honest mistakes would result in roughly half the weights being too low and half being too high, the staff memo said.

Notably, the weights of 292 samples were reduced by exactly 20%, a suspiciously precise decrease unlikely to occur simultaneously from 292 individually measured samples of pot, the state memos said.

On Sept. 3, 2020, three liquor and cannabis board inspectors showed up at Praxis to investigate.

One clue quickly popped up to trigger the inspectors’ suspicions that the results were being changed. Many of the weights of the test results were measured out to five places to the right of the decimal point. For example, a sample would be recorded as weighing 2.55555 grams. But inspectors noticed all the lab’s scales recorded only four spaces to the right of the decimal point.

Consequently, a sample could be weighed only to a precision of 2.5555 grams, meaning a figure five places to the right of the decimal could not come from that scale. Lab owner Dustin Newman could not explain that wrinkle to the inspectors, a liquor and cannabis board memo said.

The  inspectors tallied 1,190 falsified weights from the Praxis Laboratory in Centralia between May and August 2020. More than 99% of those results decreased the weights, which increased THC levels on paper. Newman approved all of the weight changes, according to a liquor and cannabis board memo.

Of the 1,190 falsified THC results, 734 came from samples submitted by Spokane-based Grow Op Farms, one of the largest operations in the state. The second highest number of changed results during those four months — 285 — came from samples submitted by White Star in Rainier in Thurston County. High Frequency Farms in East Wenatchee had 57 falsified results. The remaining changed results were scattered among 12 other grower operations.

At the time the inspection occurred, data on a few hundred suspected samples appeared to have been deleted from the lab computer system, a liquor and cannabis board memo said. 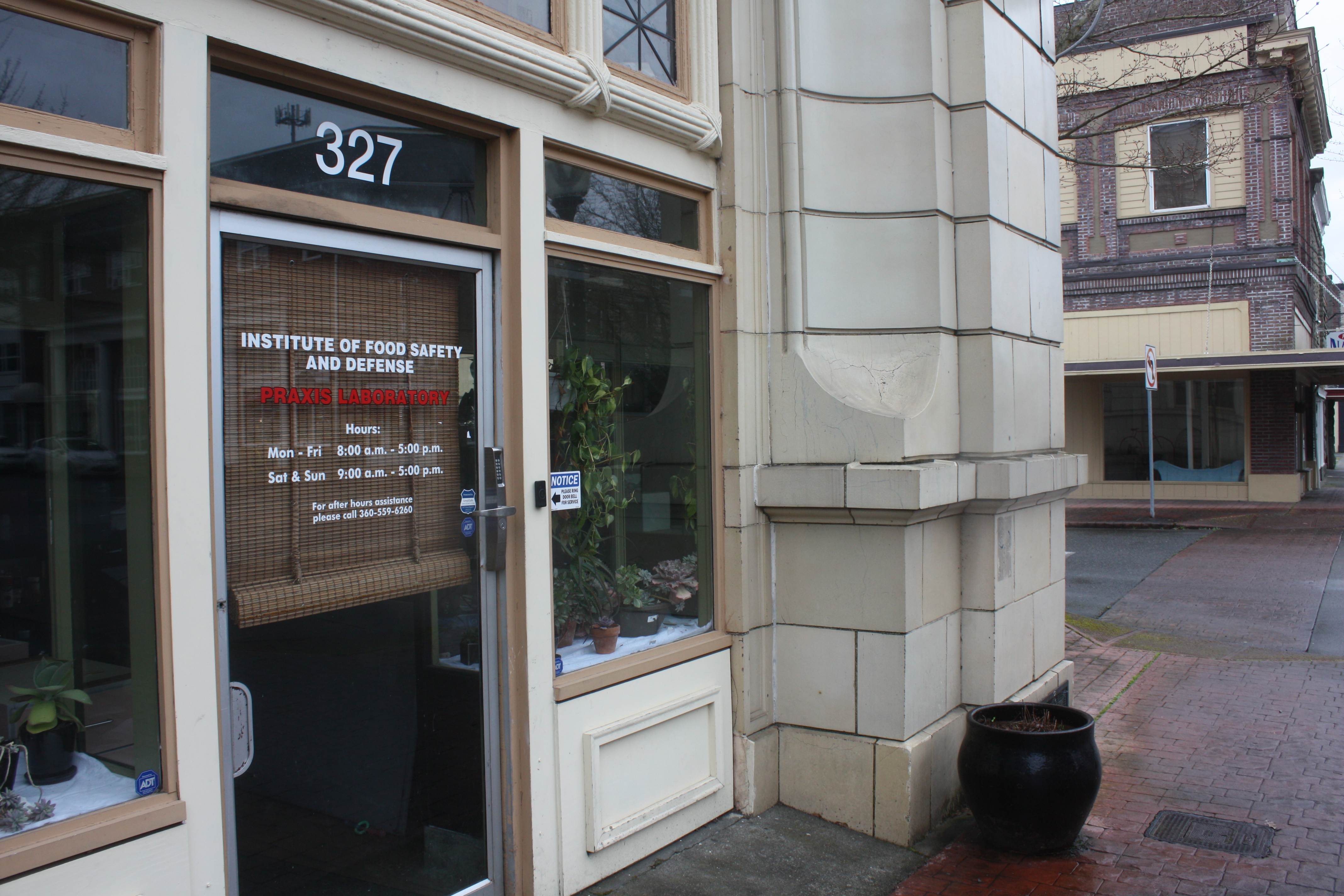 Outside the front door of The Praxis Laboratory in Centralia. (John Stang for Crosscut)

Outside the front door of The Praxis Laboratory in Centralia. (John Stang for Crosscut)

Owners of both White Star and High Frequency Farms said they never requested Praxis to change their THC results. Grow Op Farms did not respond to several requests for comment by phone and email.

Damien Mahan of White Star said his family’s operation never had any problems with Praxis and did not suspect any alterations to the data involving their samples, trusting the lab was doing the tests correctly.

High Frequency’s owner Stevie Vanassche said her operation has had a problem with Praxis only once, when her company questioned the lab about discrepancies between the results sent to the farm and to the state database.

Vanassche called Praxis “a great lab until right before everything blew up.”

Jennifer Dzubay, commander of the liquor and cannabis board's  marijuana enforcement unit, and Kendra Hodgson, manager of the board’s section in charge of testing labs and business matters, said none of the growers receiving falsified results are being investigated.

Liquor and cannabis board officials and Skeate don’t believe the growers requested the falsified result, saying there is no evidence of any such requests being made. Citing ongoing litigation with Praxis, board officials declined to speculate on Praxis’ motive for increasing the THC levels. “We really can’t say what the motivation might be,” Hodgson said.

Skeate noticed that the weights of Praxis’ biggest clients were changed, speculating that the higher THC levels might encourage those growers to keep using Praxis as their testing lab.

On Dec. 10, 2020, the board suspended Praxis Laboratory’s marijuana testing certification. The suspension is scheduled to be lifted on June 8. However, the board has begun legal action to permanently revoke Praxis’ certification. The lab is legally contesting that move, seeking an eventual hearing before the board.

“We have never taken away someone’s license. … The Praxis situation is unique and different,” Hodgson said.

While providing a few hundred pages of documents, liquor and cannabis board officials declined to discuss details of the case because of the litigation.

The state has begun legal actions against a half-dozen testing labs over the past several years. But those situations were quickly remedied. The remedies included updating manuals or improving training, board officials said.

Meanwhile, Praxis Laboratory, with 17 employees, has permanently shut down, but lab owner Newman said he plans to keep fighting for its certification. He said the small business shut down because it could not stay afloat after being closed for six months.

“I find the [liquor and cannabis board] is acting reprehensibly,” said Newman, who now works as an independent pharmaceutical and food industry consultant.

The lost data during the Sept. 3 inspection was kept on backup servers, and the inspectors and Skeate did not know where to find them, Newman said. “Nothing was destroyed, but copies were sent to different locations that Keegan did not have access to,” he said. He also said several of Praxis’ scales measure weights out to five places to the right of the decimal point.

Citing the ongoing litigation, the liquor and cannabis board declined to comment on Newman’s accusations.

This is the second time that Newman has been accused of altering marijuana testing lab results.

In 2016, The Seattle Times reported that Testing Technologies in Poulsbo fired Newman, its chief science officer, over falsified results, possibly including the THC levels. The Times quoted Testing Technologies owner Larry Ward alleging that some of Newman’s tests’ “potency values appear to be ‘pulled out of thin air.’ ”

In return, Newman accused Ward of firing him because of a conflict over Newman’s ownership share of Testing Technologies.

On Sept. 4, 2020 — the day after the state inspection — Newman sent an email to his employees: “I find it very frustrating that these discrepancies have happened and an internal investigation is ongoing on how they happened and why. … I have chosen to step down in order to comply with the new internal company policy and am no longer an employee of Praxis Laboratory, and no longer have any role in the operation, or management of the company.”

On Sept. 18, Praxis administrator Victoria Johnson sent an email to the liquor and cannabis board saying Newman was no longer involved in day-to-day operations of the lab.  But on Sept. 23, Newman fired Skeate.

This story and the headline has been updated to change references to marijuana testing lab licenses to certifications, as they are officially called.