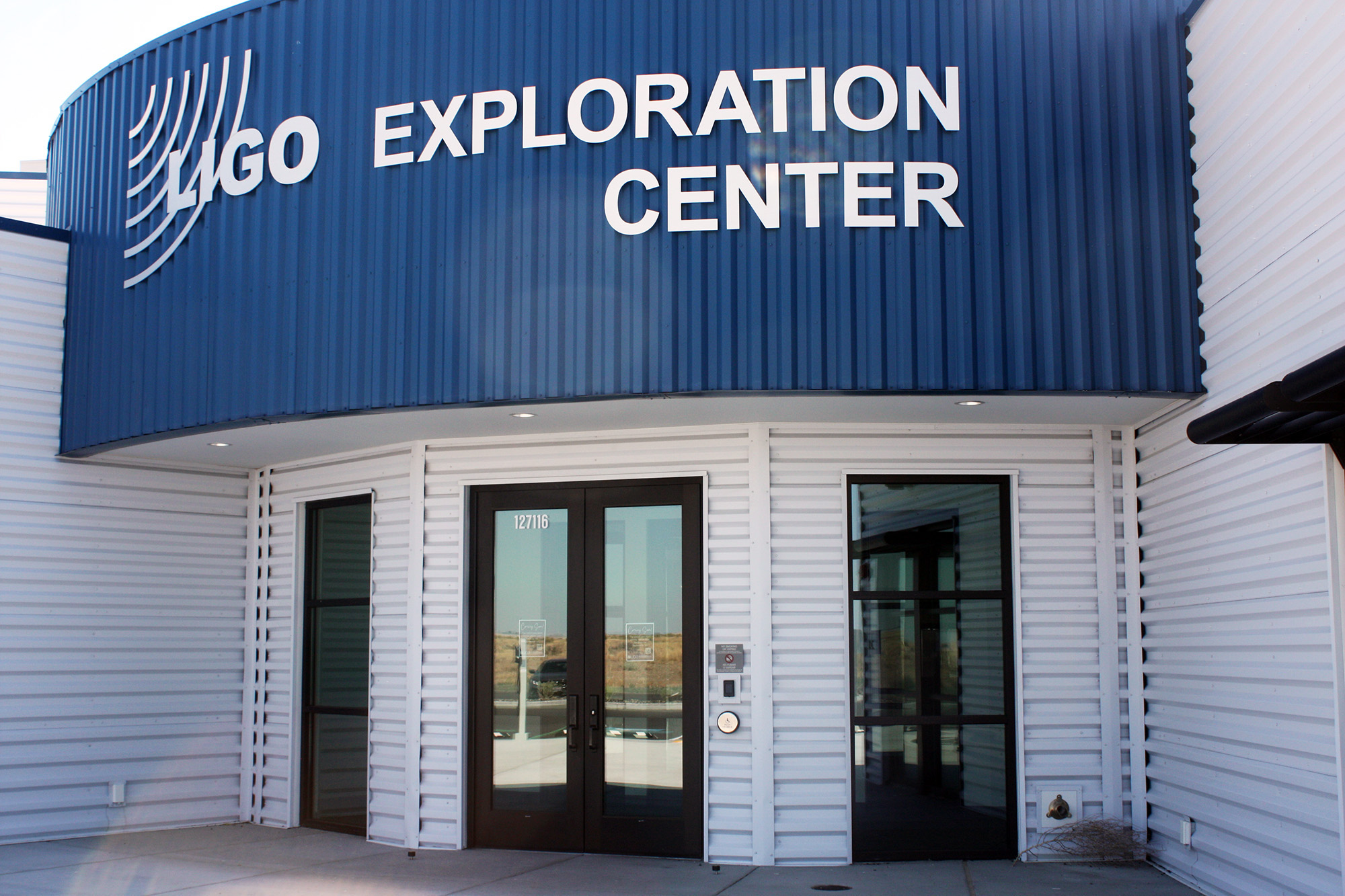 Entrance to the new LIGO Exposition Center near the Hanford Nuclear Plant. (John Stang for Crosscut)

On a small dance floor in southeastern Washington, a projected light grid wraps around the step-step of your feet to imitate a black hole warping space-time.

Nearby, you hear what one might sound like — “woOOOP!” — along with other space phenomena: colliding neutron stars going “WOO-woo WOO-woo WOO-woo!” and the hypothesized “blip” of supernovas.

This is the LIGO Exploration Center, an exhibition hall that breaks down astrophysics for kids and nonscientists of all ages. LIGO stands for Laser Interferometer Gravitational-Wave Observatory.

Unlike your average science museum, however, this space is housed on the south end of the Hanford Nuclear Reservation. The decommissioned plutonium production complex, located just north of Richland, is considered the most radiologically and chemically polluted spot in the Western Hemisphere. The LIGO Exploration Center is separate from the Hanford museum in Richland, which covers the site’s nuclear history.

The facility, which opened to the public last week, sits just a couple hundred feet away from Hanford’s Laser Interferometer Gravitational-Wave Observatory, or LIGO. The observatory acts as a ginormous microphone capable of picking up sounds — actually gravitational ripples in space-time — from black holes and colliding neutron stars. The LIGO’s farthest-out discovery is a black hole more than 10 billion light-years from Richland.

The LIGO Exploration Center is open to visitors from 9:30 a.m. to 4 p.m. on Tuesdays through Fridays. The Hanford LIGO lab will hold public tours on Saturdays, beginning Oct. 8. These public tours will include touring the actual LIGO facility and the exploration center, plus a talk by a staff member.

“Not many places have the science and outreach happening in the same place,” she said.

So what are gravitational waves and a LIGO?

Albert Einstein mathematically wove space and time together in 1916 when he theorized that massive objects can warp and curve the linked "space-time." In his theory of general relativity, gravitational waves are a property of space-time and can vibrate in a way vaguely similar to ripples sent out when a rock splashes into a pond. Instead of movement on the water’s surface, think of those waves rippling out three-dimensionally in countless directions. In outer space, those "rocks" could be stellar explosions, dying stars collapsing or black holes and neutron stars circling each other.

Enter Kip Thorne, a physicist at California Institute of Technology in the late 1960s, when he first pondered how to detect gravitational waves. Caltech and the Massachusetts Institute of Technology built two LIGO observatories, at Hanford and Livingston, Louisiana, to study them. Both locations are isolated, flat places with few outside vibrations. In fact, both sites spent years tweaking their instruments to nullify the effects of those few outside vibrations before going on online in 2002.

LIGO interferometers shoot an infrared laser beam about the diameter of a car headlight at an angled piece of polished glass, which splits the light beam in two directions. The split beams are then further reflected to travel over 2.5 miles down two huge vacuum tubes, hitting mirrors at the end to bounce back. If everything is perfect, every bit of light returns to the laser. But if a gravitational wave jiggles the mirror microscopically at a subatomic scale, some laser light goes in another direction to be caught and studied. 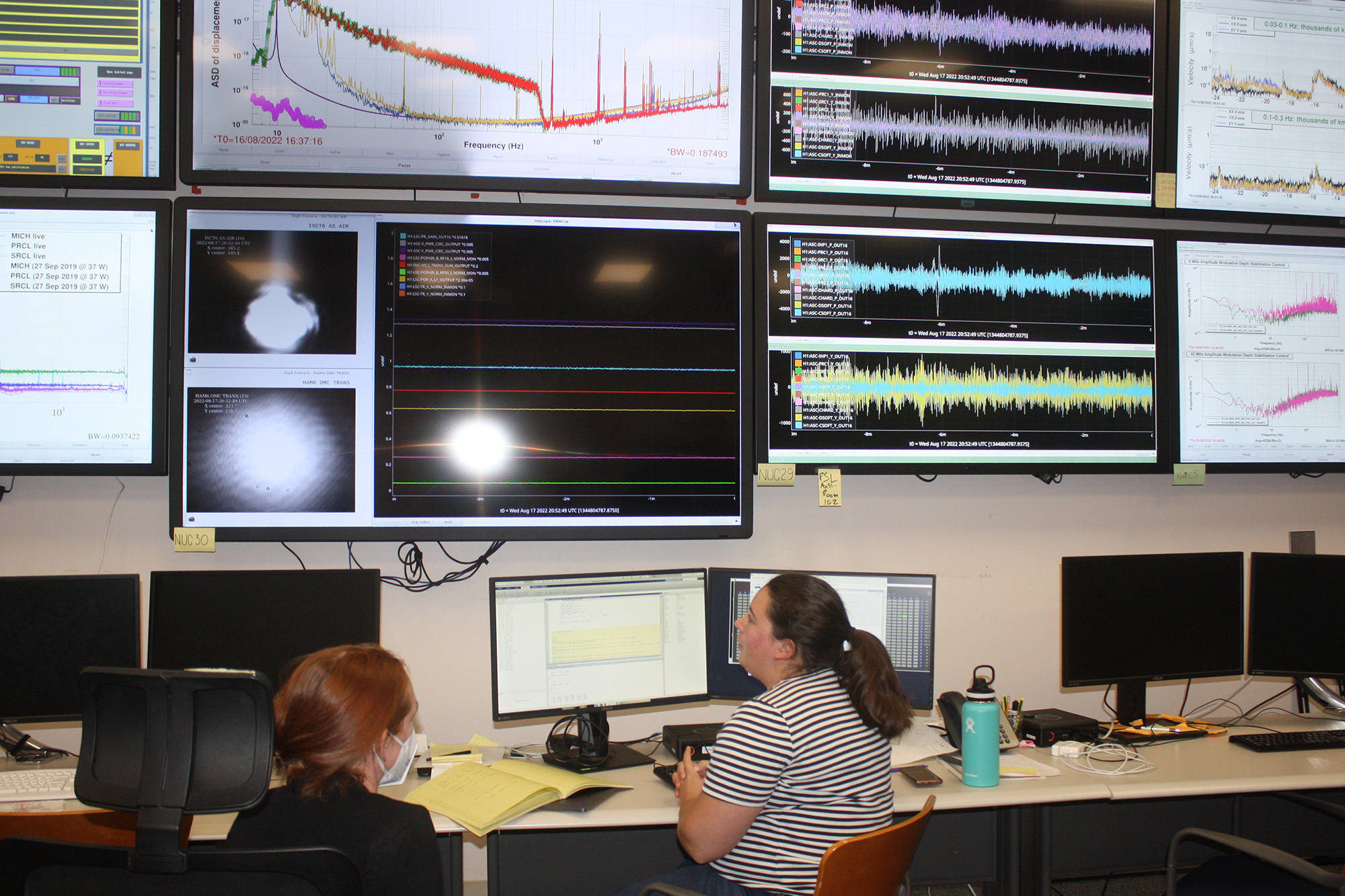 The LIGO project found its first gravitational wave from two colliding black holes about 1.3 billion light-years away on Sept. 14, 2015, after a five-year upgrade in its sensitivity. After lots of double-checking, Caltech and MIT announced their discovery on Feb. 11, 2016.

The project’s leaders — Thorne, Rainer Weiss and Barry Barish — received the 2017 Nobel Prize in physics for the discovery. A copy of Weiss’ Nobel Prize is displayed in the exploration center.

Theoretically, the LIGO project might detect supernovas. Forget about wormholes, though. While a staple of science fiction, the math does not support the existence of wormholes in the physical world, said Mike Landry, Caltech’s head of the Hanford LIGO.

The innards of a black hole are still a big mystery, too. 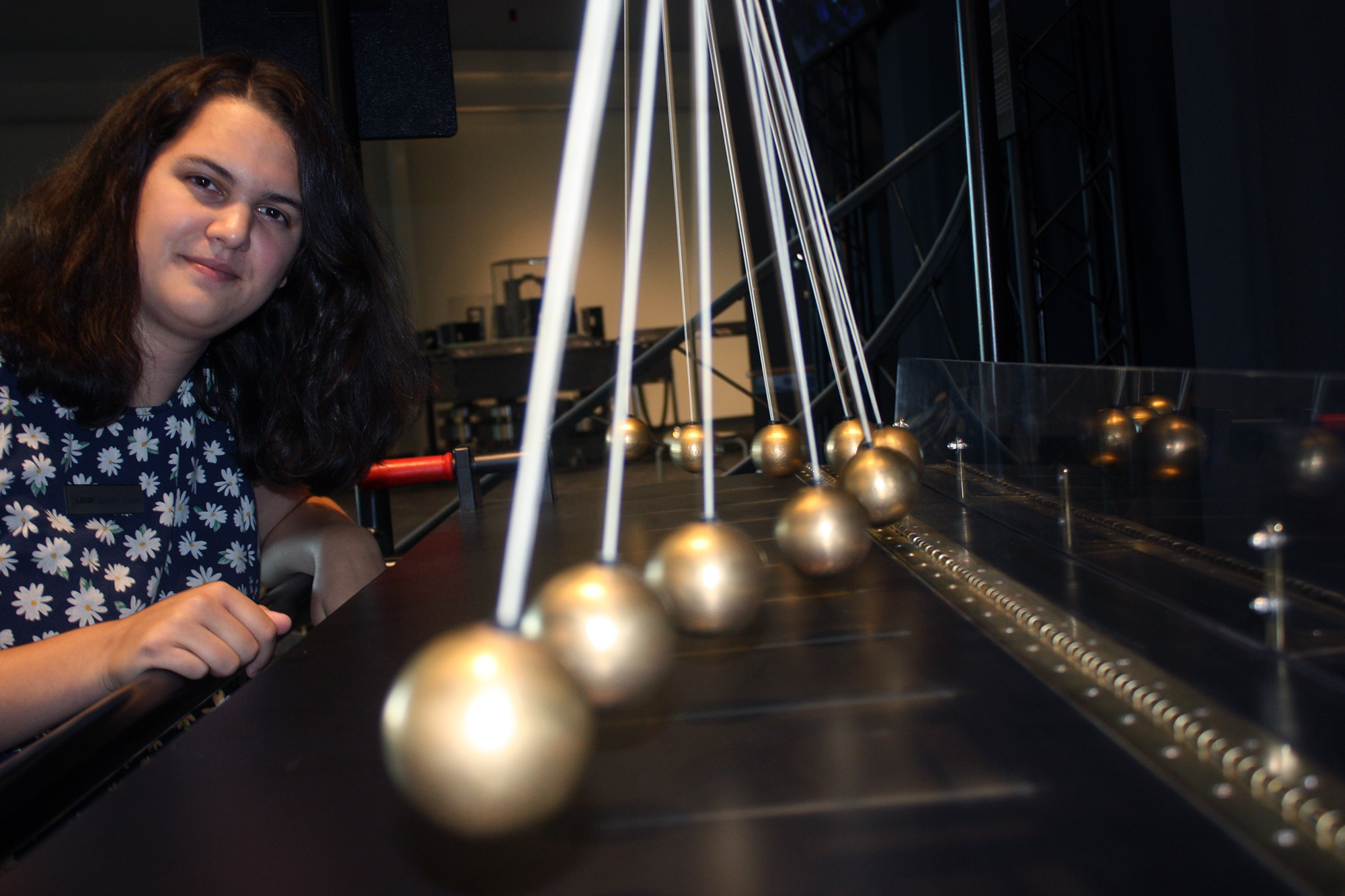 Right now, Hanford’s LIGO is offline for some upgrades and is scheduled to go back online in March 2023.

Meanwhile, the Livingston LIGO has had an educational outreach center for 15 years. There was never enough money stashed away in the federal budget for Hanford LIGO to open a similar outreach center until the state of Washington put up $8.1 million for it.

In pre-COVID years, the Hanford LIGO averaged roughly 3,500 visitors visiting the site and LIGO control room annually. That bumped up to a total of roughly 8,500 in the year following the 2016 announcement of discovering the first gravitational wave before dropping back to the original visitation numbers. With the new LIGO Exploration Center, the scientists hope to bump up that number to 10,000 visitors a year.

When people enter the exploration center, among the first things they see will be a copy of Weiss’ Nobel prize and a photo board of more than 40 LIGO scientists, educators, business people, millwrights and technicians. The photo board’s purpose is to show the wide range of jobs needed to run the gravitational wave observatory. It also shows the wide ethnic range of people working at the observatory to connect with the high percentage of Hispanic and Native American kids going to school in south-central Washington. Many kids of all ethnicities visualize a scientist as “a light-skinned man with poofy hair in a white lab coat that looks like Einstein,“ Eassa said.

The Hanford LIGO Exploration Center has to explain the advanced astrophysics of gravitational waves, black holes and lasers to normal kids and lay people.

This is where slinkies, magnets, pendulums, marbles, funny sounds and a cosmic dance floor come into play. 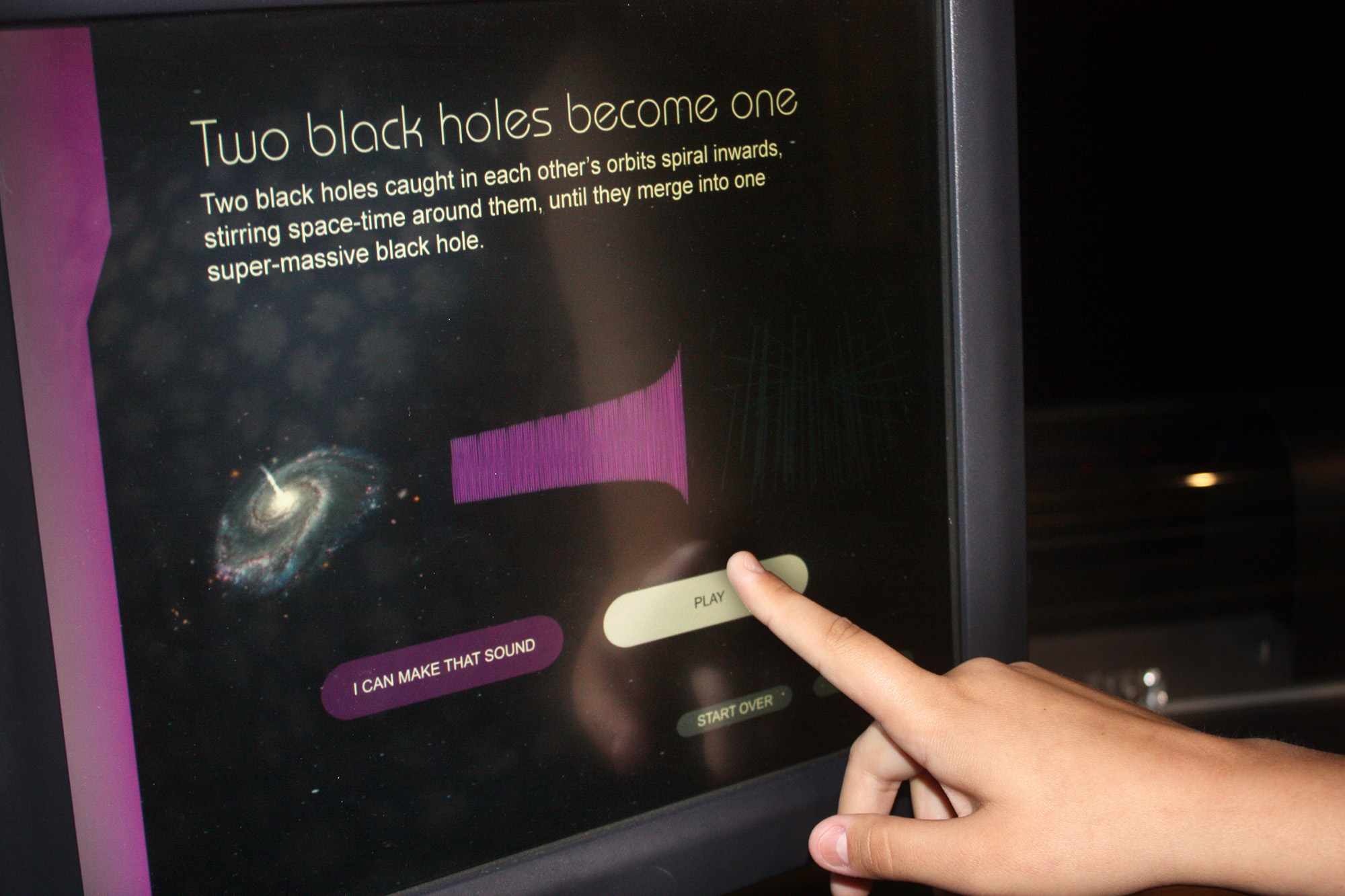 Here are some examples of the other topics explored at the center:

• The science of pendulums with the lengths of strings and swinging gets a workout with several exhibits at the center. That’s because the mirrors reflecting the laser beams in the LIGO dangle by super-thin filaments.

• How to pinpoint sound with 12 loudspeakers — three per leg — mounted as a cross. Visitors can use their two ears to pinpoint which loudspeaker is emitting a sound. Those two horizontal ears represent the Hanford and Louisiana LIGOs. Finding the distance and location of a black hole is essentially an extreme trigonometry problem. With a pair of vertical ears, pinpointing the correct loudspeaker becomes easier. (Two smaller gravitational-wave detectors are operating in Italy and Japan; think of them as the second set of vertical ears to make pinpointing the location of the black hole, or loudspeaker in this case, easier. Another detector, in India, is supposed to go online in 2030.)

• “Sort of” simulate a black hole’s gravitational force on a plane of space-time. Visitors do this by placing a heavy marble on a cloth — and watching the cloth sink under its weight. The “sort of” is because, unlike the center’s simplified model, a black hole warps space-time in every direction around it, not just downwards. That means visitors need to imagine this warping simultaneously occurring in countless planes, in countless directions around the marble portraying the black hole.

• Explore the science of light. At one table, a visitor can experiment with light using a beam splitter, different lenses and mirrors. The LIGO lab makes extensive use of lasers and mirrors.