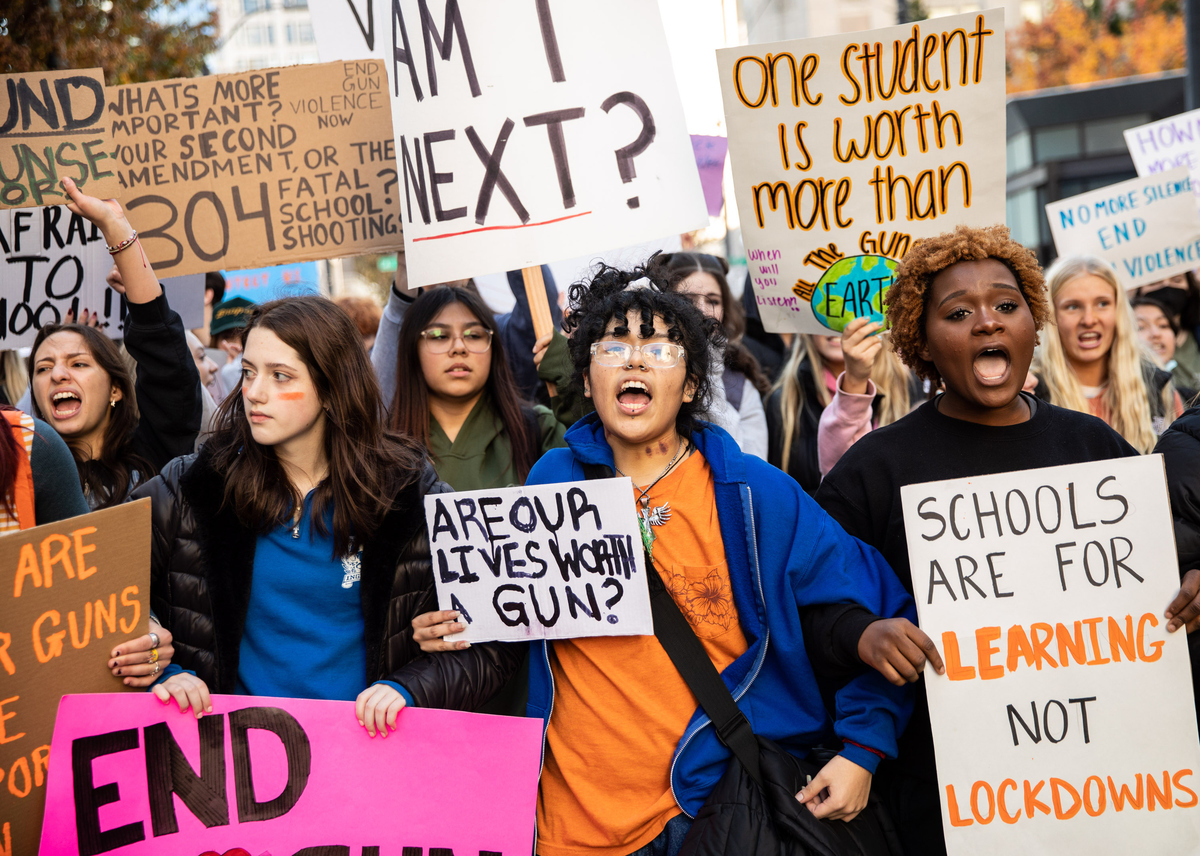 Sophomore Jason Magdaleno, 16, was in the hallway at Seattle’s Ingraham High School when another student was shot and killed last week.

“I didn’t know what fear felt like until that moment,” he said in front of City Hall on Monday during a student walkout. “I don’t want anyone to have to go through what I went through. … Every hug, every ‘I love you,’ could be your last.”

Painful memories like Magdaleno’s have become all too familiar throughout the United States. At least 152 incidents of gunfire have occurred on school grounds in 2022 across the nation, according to Everytown, a gun-control advocacy group that tracks shootings on K-12 campuses both during and outside of school activities.

The incident at Ingraham was the second fatal shooting in Washington public schools in the past calendar year. In March, a 16-year-old died after being shot in the parking lot of Eisenhower High School in Yakima. The 15-year-old student who shot him pleaded guilty to second-degree murder.

In the past eight years, there have been at least 10 shootings in Washington state at K-12 schools during school hours or activities, with at least four resulting in injuries or death, according to the Everytown database. The organization collects its information from media reports and the K-12 School Shooting Database.

Most were not the type of mass shooting that sparks a national conversation and policy changes or drives massive media coverage, such as the attack earlier this year in Uvalde, Texas, in which 19 elementary school students and two teachers died. 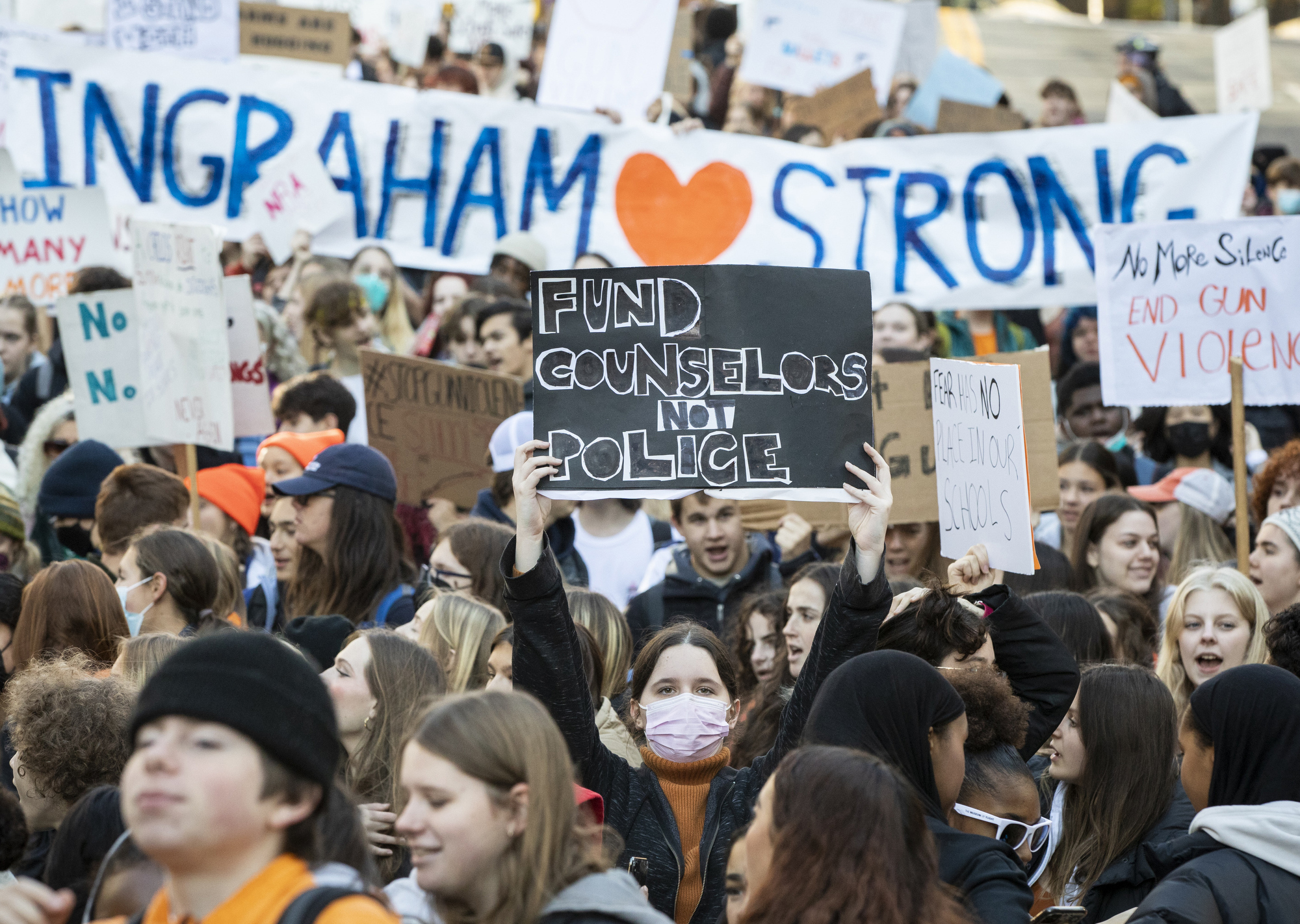 Most shootings reported at Washington schools were the result of a targeted shooting or a dispute between students.

Prosecutors say that might have been the case at Ingraham. According to charging papers, the shooting at Ingraham last week occurred after an altercation on campus between the accused shooter, 14, and the student who died, who family said was a 17-year-old senior.

The 14-year-old, who was arrested off campus shortly after the shooting, faces charges of first-degree murder, first-degree assault and unlawful possession of a firearm. Prosecutors are seeking to have the 14-year-old charged as an adult.

A 15-year-old also faces charges in juvenile court of second-degree unlawful possession of a firearm and first-degree felony rendering of criminal assistance, after police said that a gun was found in his backpack.

“We know we have more and more violence plaguing us, and now it’s entering into our Seattle schools. The pressure of the streets has violated our school buildings,” said Seattle Public Schools Superintendent Brent Jones at a school board meeting the day after the shooting.

At the same meeting, student board member Luna Crone-Barón, a junior at The Center School, called for a robust response from the district, but added that she would not support additional police at schools.

“The response I’ve seen is that this is an isolated incident, this was a fight between two students. So what. There is still a child who was killed at school. … It doesn’t make it any less unacceptable and any less a failure on the part of our district, on the part of all of us up here,” Crone-Barón said. “At this moment I feel lost.” 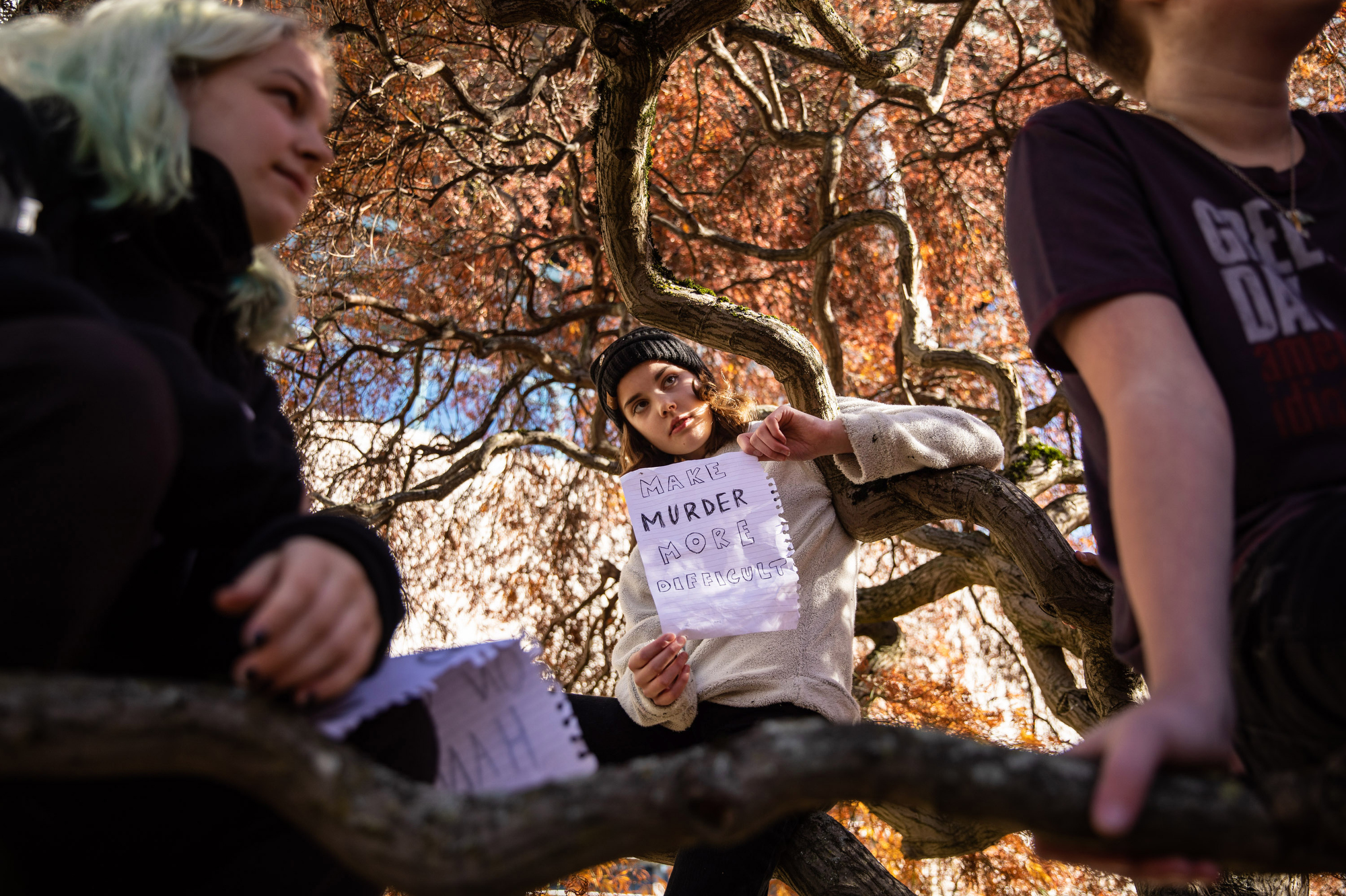 Penny Neukom, a student at The Northwest School, protests outside City Hall on Monday, Nov. 14, 2022. Thousands of students from Ingraham High School and other Seattle schools protested for more gun control and mental health support at City Hall after a walkout early that morning. (Amanda Snyder/Crosscut)

Penny Neukom, a student at The Northwest School, protests outside City Hall on Monday, Nov. 14, 2022. Thousands of students from Ingraham High School and other Seattle schools protested for more gun control and mental health support at City Hall after a walkout early that morning. (Amanda Snyder/Crosscut)

Criminology researchers in an article for The Conversation reported that despite the increase in school security measures nationwide since the 1999 mass shooting at Columbine High School in Colorado, including clear backpacks, metal detectors and cameras, incidents involving shootings at schools have been on the rise nationwide, reaching more than 250 incidents nationwide in 2021 and in 2022, up from 114 incidents in 2020.

Federal law requires schools to report weapons incidents each year. During the 2019-2020 school year, 2,400 public school students from kindergarten through 12th grade were reported to have possessed firearms at schools in the United States.

But there is no national consensus on a solution. According to a recent poll by the Pew Research Center, while 63% of parents nationwide believe that greater mental health support in schools would be an effective way to combat school violence, parents are split over the effectiveness of measures such as increased police presence in schools or banning assault weapons.

But that same survey, conducted a few months after the shooting in Uvalde, showed that 19% of parents are “extremely worried” about a shooting happening at their children’s schools.

Seattle Superintendent Jones announced at last week’s meeting that the district was convening a safety and security audit of all schools; a community action team involving Seattle Police Chief Adrian Diaz and Mayor Bruce Harrell; and a council that will focus on student mental health.

Students are looking for more concrete solutions. The rally at City Hall on Monday was organized by the Seattle Student Union, a districtwide coalition of students, and Ingraham For Gun Safety, which was a school club that existed before the shooting.

Student organizers called for increasing the number of mental health professionals in Seattle schools to one for every 200 students; a required student class on mental health; greater support of programs that address inequities in education; and increased security without the use of police officers. 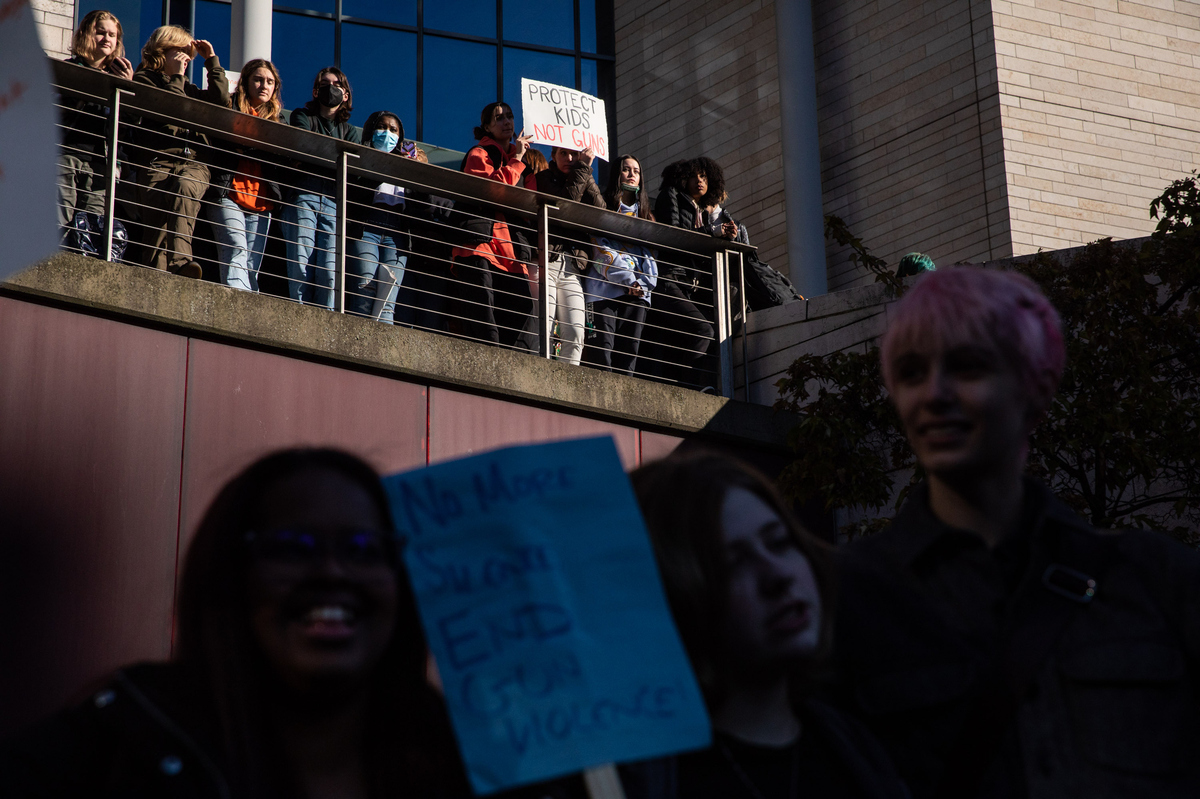 “We do not want police officers, as armed security fails to prevent acts of violence from occurring,” organizers wrote in an Instagram post listing what they would like to see.

Seattle Public Schools have unarmed safety and security staff, but do not have school resource officers, which are typically police officers. The district issued a one-year suspension of its partnership with the Seattle Police Department in 2020, after national protests following the murder of George Floyd by Minneapolis police officers, and after the district discovered that the police department used a school property as a staging area for a protest response exercise.

Magdaleno said after the shock of the shooting at Ingraham, he felt he had to help organize the city-wide school walkout on Monday.

“The first emotion after fear was anger,” Magdaleno said. “Anger at society, at the principal, at the media. And how normal it is for shootings to happen at schools.”

Lena Chalsani, a seventh grader at Hamilton International Middle School, was one of the thousands of students from other schools to join the walkout. She was with her classmates, Charley Rhydderch and Naomi Leng, holding a sign that said “Gun Control Works.”

“I have thought about this happening a lot before, and I shouldn’t be,” said Lena, 12. “It’s a sad thought, I want to learn and have a future, and I don’t want to die at school.”

“I shouldn’t be walking into one of my classes and looking around and asking myself if something were to happen, where would I go,” said Naomi, 12. “Those are thoughts that shouldn’t happen to anyone.”

River Fletcher, a sophomore at Ingraham, said this is their third high school in two years, but already it is the second shooting, including one in a parking lot in Everett. At another school, there was also an incident that turned out to be a false alarm over an airsoft gun.

“It’s concerning that all three have had incidents,” said Fletcher, 15.

While Fletcher joined the other students in support of action at schools, they also focused on making sure that fellow students know they are supported. 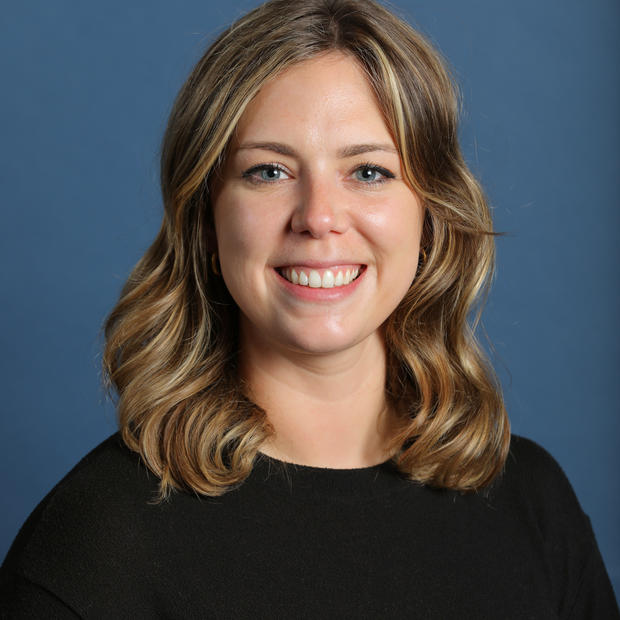