The state Legislature passed the ban on single-use plastic bags with bipartisan support in 2020, but the pandemic has delayed its implementation. 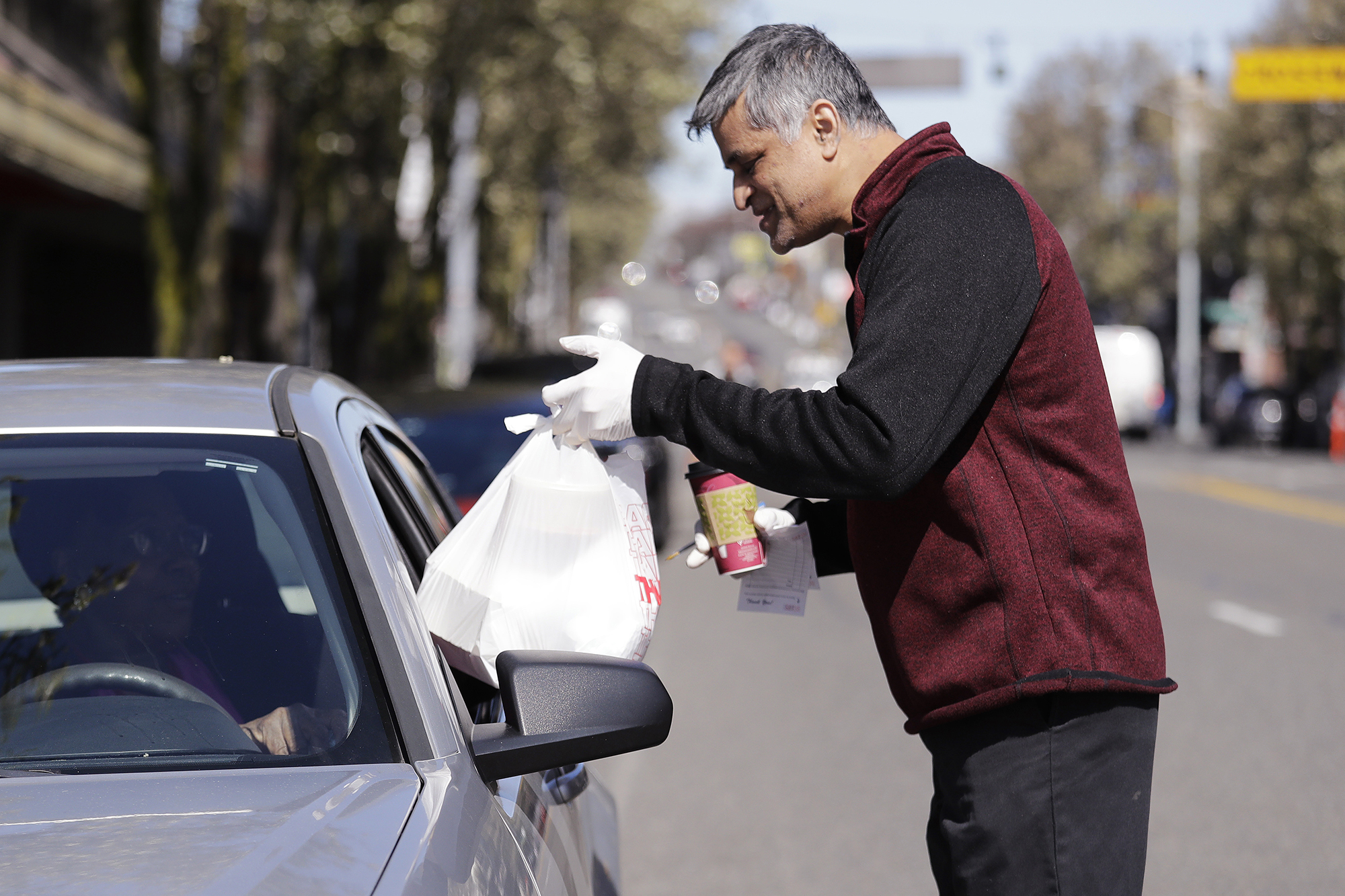 Glen Quadros, owner of the Great American Diner & Bar, hands over a takeout food order, packaged in compostable containers placed inside a plastic bag, to a waiting customer in Seattle on March 31, 2020. Washington state has delayed a plastic bag ban because of the pandemic. (Elaine Thompson/AP)

“The pandemic has thrown off so many plans with our loved ones, our lifestyle and with this legislation,” said the bill’s primary sponsor, Sen. Mona Das, D-Kent, affectionately dubbed “The Single-Use Plastic Warrior” by her colleague, Sen. Reuven Carlyle, D-Seattle.

The new law, which was scheduled to take effect Jan. 1, 2021, isn’t dead, supporters say, but enforcement has been indefinitely postponed.

The state law was inspired by 38 local ordinances around Washington that regulate plastic bags. Holly Chisa of the Northwest Grocery Association said some of those local regulations resulting in Washington cities seeing 85% of customers using reusable bags. As Gov. Jay Inslee’s signature dried on the plastic bag ban, those hard-fought wins for environmentalists were reversed by a virus-induced renaissance of single-use plastic bags.

For state Rep. Strom Peterson, D-Edmonds, the ban was more than 10 years in the making. During his time on Edmonds City Council, he helped pass the state’s first local jurisdiction plastic bag ban. An environmental justice organization known as Algalita inspired Peterson when it visited the council as part of an educational tour on the West Coast.

The group presented samples of ocean water its members had collected from the Great Pacific Garbage Patch. Though the opaque water sample (complete with chunky “plastic sludge”) has since partially evaporated, the container still sits on Peterson’s desk in Olympia.

“It’s a nice, not-so-subtle reminder of what we’re dealing with,” Peterson said.

Now, after aiding Das in pushing the state law forward, Peterson is sponsoring a bill to delay it. By fall of 2020, Peterson said, he began to accept the “bleak reality” that a plastic bag ban would not be feasible by Jan. 1.

In a Jan. 12 public hearing, Peterson said House Bill 1053, which would pause the statewide ban, is the first bill he has sponsored that he does not like.

“The ban passed with bipartisan support,” Peterson said. “No one's dancing in the streets because of the delay.”

On Jan. 15, while HB 1053 was still in committee, the state Legislature voted to extend a long list of the governor’s COVID-related proclamations, including a delay in the plastic bag ban.

Peterson, who voted to pass the extensions, acknowledged that he did not realize Inslee had already called for a delay on the ban. HB 1053 will not move forward because the ban has already effectively been delayed.

“Our frontline grocery workers are already dealing with a lot,” Peterson said. “If plastic bags can take one thing off their plate — whether the science backs it or not — that’s fine.”

At the onset of the COVID-19 health crisis, grocery stores questioned the safety of reusable shopping bags. This resulted in some stores, including Kroger-owned stores in Seattle, banning reusable bags altogether.

A first-time plastic bag ban supporter, state Sen. Mary Dye, R-Pomeroy, went to a grocery store during the pandemic when the newly passed ban was fresh in her mind. She was determined to remember the reusable bags she often forgot in her car. When Dye got to the door, tote in tow, she realized the store no longer allowed outside bags.

“I was so proud of myself for remembering to bring my reusable bag,” Dye laughed. “I was going to make that transition.”

Because plastic makes up less than 10% of recycling and garbage collected by Seattle Public Utilities, Pat Kaufman, the recycle/compost commercial program manager at the utility, said it is difficult to measure an increase in plastic bags in Seattle’s trash.

“We see the increase in plastic bag use, but we see it as the consumption is occurring and not in the waste stream,” Kaufman said.

According to Kaufman, grocery stores have called his team, which enforces plastic bag bans, to make sure they will not be fined for breaking local ordinances that have been temporarily suspended.

The Seattle utility reported that while commercial waste dropped 20% since the pandemic began, residential waste is up by 10% from 2019. Kaufman said a “sliver” of that increase comes from the resurgence of single-use plastic bags in the grocery and restaurant industries. He also reports an uptick in other single-use products, like disinfectant wipes. More notable is a 25% increase in cardboard waste that Kaufman attributed to e-commerce shipping boxes.

New information from the Centers for Disease Control and Prevention about how the virus spreads has eased concerns about transmission on surfaces such as cloth bags. According to the Washington Food Industry Association , there has been no guidance from the state Department of Health on reusable bags. So the industry organization has asked that stores be given the choice of whether to accept them or not.

Some smaller grocers never made a switch to plastic. The manager of the Durn Good Grocery in the Wallingford neighborhood of Seattle said the store offers only  paper bags and “most folks just grab a bag of chips and go.”

Even with COVID-19, Marketime Foods in Fremont never changed its bagging procedures. According to the manager, the store never had any qualms about reusable bags, saying he was not even aware that plastic bags were back in use in Seattle.

Peterson, who retired his reusable shopping bags to a corner of his garage for months, is using them in grocery stores again.

Das is hopeful shoppers will start bringing their own bags again before the 8-cent charge per paper bag is implemented. She said the pandemic has not paused her commitment to the environment. Das hopes 2021 will be the year of the plastic foam ban with Senate Bill 5022.

The governor’s delay is just that: a delay. The plastic bag ban is set to be revisited July 1, when it  could be deferred again. Peterson is certain that plastic, although helpful now, is not here to stay.

“Now that we know more, we can take a breath — with a mask on — and think about the environment again,” Peterson said.