New WA police accountability law can now include past misconduct

The state Criminal Justice Training Commission made the decision Wednesday, resolving a dispute about how far back the new law could reach. 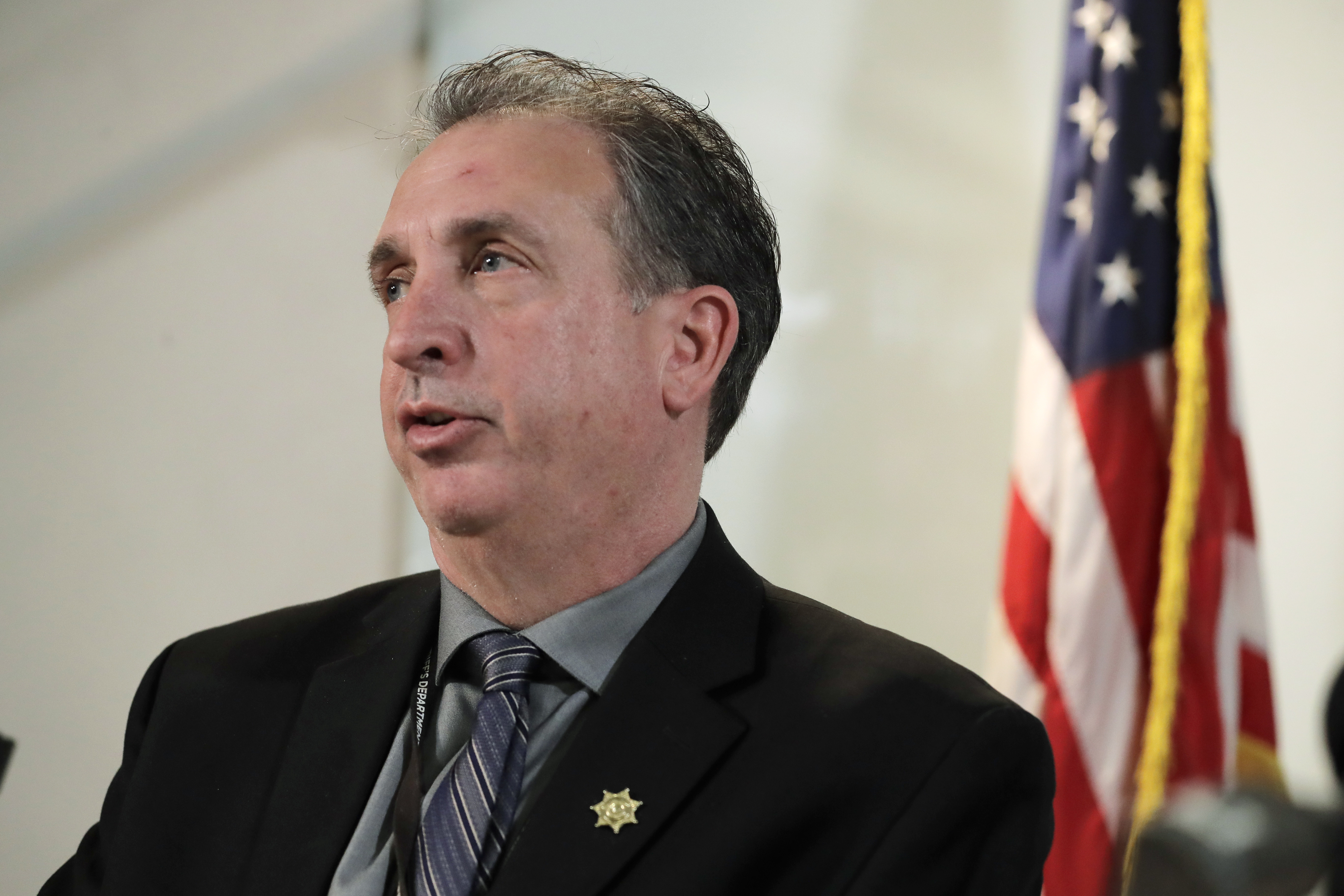 In this Feb. 18, 2020, file photo, then-Pierce County Sheriff's Department spokesman Detective Ed Troyer answers questions during a news conference in Tacoma. A recent vote by the state Criminial Justice Training Commission will apply a new police accountability law to past misconduct. This means Troyer, now the Pierce County sheriff, could find his  police license in jeopardy after he was charged with two criminal counts for making a false statement in 2021. (Ted S. Warren/AP file)

The body that licenses police officers in Washington state has decided to apply a new police accountability law to past misconduct, instead of only to officer misconduct that occurred after the law took effect last July.

The vote by the state Criminal Justice Training Commission resolves a dispute between lawmakers and the commission about how far back officers can be held accountable under Senate Bill 5051.

The law, which took effect July 25, 2021, expands the criminal justice commission’s authority to investigate and decertify police officers. Decertification — essentially, revoking an officer’s policing license — prevents someone from working as a cop anywhere in the state.

As detailed in a story by Crosscut last August, staff members of the state commission believed the commission could not apply the new decertification law retroactively to older misconduct. That was counter to key lawmakers' intentions when passing the bill.

The issue gained new attention last fall, when Pierce County Sheriff Ed Troyer was criminally charged with making a false statement after he called 911 on a Black newspaper carrier.

Because that incident occurred in January 2021, six months before the new decertification law took effect, the Criminal Justice Training Commission said it couldn’t even consider going after Troyer’s policing license.

Now, the agency is changing course.

On Wednesday, the commission’s governing board voted to apply the new law “to conduct occurring both before and after July 25, 2021, and specifically to the conduct the officer knew or should have known violated law or policy and impacts suitability to serve.”

“Accountability doesn’t have a deadline,” said one of the commission members, Tim Reynon, shortly before the 14-4 vote. The commission recently was expanded from 16 to 22 members, adding more community members and including fewer representatives from law enforcement.

“For my community that has been subject to misconduct for generations, we want to see the standard applied across the board,” added Reynon, a former Puyallup Tribal Council member who now is a tribal liaison for the city of Seattle.

State Sen. Manka Dhingra, a Democrat from Redmond who chairs the Senate Law & Justice Committee, said the commission’s decision is the “right direction” and “consistent with the understanding I had when this bill was passed.”

“This is really about making sure the public has faith in our law enforcement," Dhingra said.

Not all members of the Criminal Justice Training Commission thought delving into past misconduct was a good idea.

King County Prosecuting Attorney Dan Satterberg was one of four commission members who voted against decertifying officers for older misconduct. He said he’s partly concerned that the staff of the Criminal Justice Training Commission will be overwhelmed with requests to investigate and decertify officers for older offenses, which he said could diminish the agency’s effectiveness and put newer misconduct cases on the back burner.

“If we get swamped, we won’t be able to meet the expectations that community has,” Satterberg said Wednesday.

Satterberg said he also worries that the commission could open itself up to legal challenges if it tries to go after older officer misconduct.

Some details — such as how far back in time the commission should look, and what kinds of older misbehavior is worth reviewing — are things the commission has yet to work out.

But he said Wednesday that he thinks it would be legal for the commission to review some older conduct — especially things that were already illegal or violations of policy before the new law took effect.

The Washington Coalition for Police Accountability, which includes many family members of people killed by police, has pushed for the Criminal Justice Training Commission to look at officers’ past misconduct, including Troyer’s.

So have many other groups, including the Washington Black Lives Matter Alliance.

The charges against Troyer stem from a Jan. 27 incident in which he called 911 on a Black newspaper carrier, Sedrick Altheimer, and repeatedly claimed Altheimer had threatened to kill him. Troyer later told Tacoma police that no such threats were made, according to a police report.

In October, the state Attorney General’s Office charged Troyer with one count of false reporting and one count of making a false or misleading statement to a public servant, both of which are misdemeanors.

Troyer’s attorney, John Sheeran, said Wednesday that he is confident Troyer will be found not guilty of the criminal charge. He said the Criminal Justice Training Commission would be wrong to pursue Troyer’s decertification while the criminal case is underway.

“We are confident that the jurors of Pierce County will vindicate Sheriff Troyer, and any action by any other entity before that would be premature and inappropriate,” Sheeran said.

Even if the commission eventually decides to decertify Troyer, doing so wouldn’t remove him from office. That’s because, unlike most police officers, Troyer is an independently elected official who can be removed only by a recall campaign, by being convicted of a felony, or by being voted out at his next election.

Because of that, several public officials and community groups have called on Troyer to resign.

This story was updated to reflect Tim Reynon’s current position with the city of Seattle.