Gov. Inslee said he'd find answers on the documents, which were shelved by a senior adviser he appointed last year to lead the prison ombuds agency. 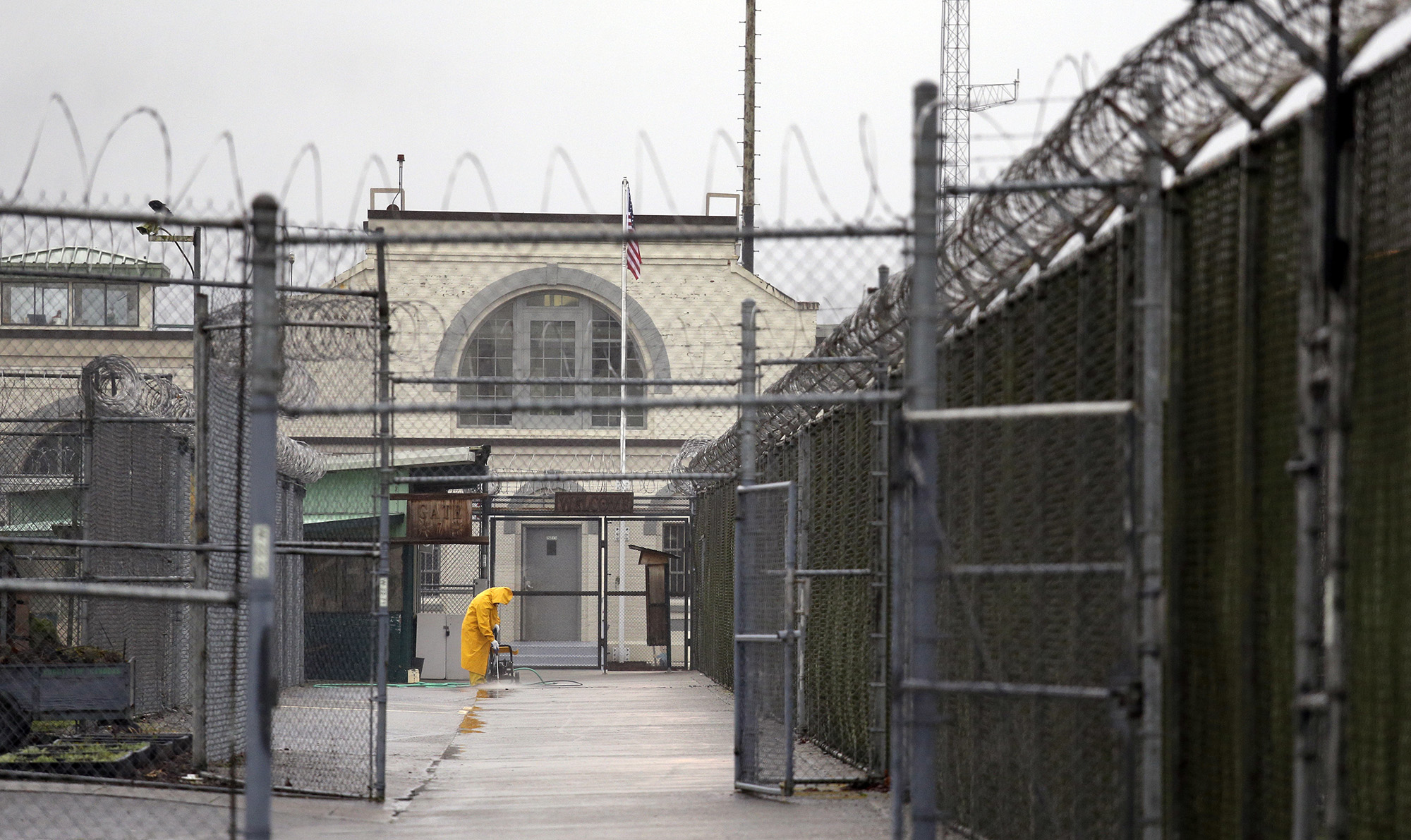 In this Jan. 28, 2016, file photo, a man performs maintenance work between razor wire-topped fences at the Monroe Correctional Complex in Monroe, Wash. The Washington Office of Corrections Ombuds continues to hold three reports, drafted in 2021, that detail conditions inside state prisons but have yet to be released. They examine issues like health care, disciplinary programs and the use of emergency restraints on incarcerated people. (AP Photo/Elaine Thompson)

A trio of independent oversight reports on conditions in Washington’s state prisons were drafted more than a year ago, but their findings still haven’t been released.

The results of these state investigations, paid for with tax dollars, are so secret, in fact, that when copies of the Washington Office of Corrections Ombuds reports were obtained by Crosscut via a public records request, they were almost completely redacted, meaning it is impossible to know what information they contain.

We only know the topics of the investigations.

One report reviews the use of emergency restraints on incarcerated people. Another examines medical accommodations for those inside, where inadequate health care can be a life-or-death concern. The third report looks at the use of disciplinary programs inside the correctional facilities.

The three reports are among seven such documents that were shelved after Gov. Jay Inslee in November 2021 appointed one of his own senior advisers to temporarily lead the small agency. The office is tasked with handling complaints by incarcerated people and shining a light on what goes on inside Washington’s 12 prisons.

Inslee in June appointed a new corrections ombuds, Caitlin Robertson, to a full term as ombuds director. Robertson, previously an investigator in the office, has released some of those delayed reports, either publicly or quietly via requests for records. But in an email earlier this month, Robertson said there are no definite release dates for the three unpublished reports, and suggested that their ultimate versions would differ from the drafts.

Robertson – and Sonja Hallum, who temporarily led the office – contended that they inherited a disorganized office in need of restructuring. In interviews earlier this year with Crosscut, they stressed the need to fulfill statutory requirements to resolve complaints by every incarcerated person. They also have said that the independent oversight agency should work in cooperation with the Department of Corrections to resolve broader issues in the prison system, then release reports with positive developments. The two have also pointed out that the office’s small budget and staff force tough decisions on what to examine.

“It's a super-small office, there's not many staff,” Hallum said in that interview. “We did not have capacity to address all of the reports.”

The agency doesn’t appear set to get more resources anytime soon. The state Office of Financial Management confirmed that Robertson didn’t request funding for more staff in the governor’s new $70 billion two-year state budget proposal. Accordingly, the governor’s office didn’t budget for the few hundred thousand dollars annually it might take to add a few staff members to help with the workload. 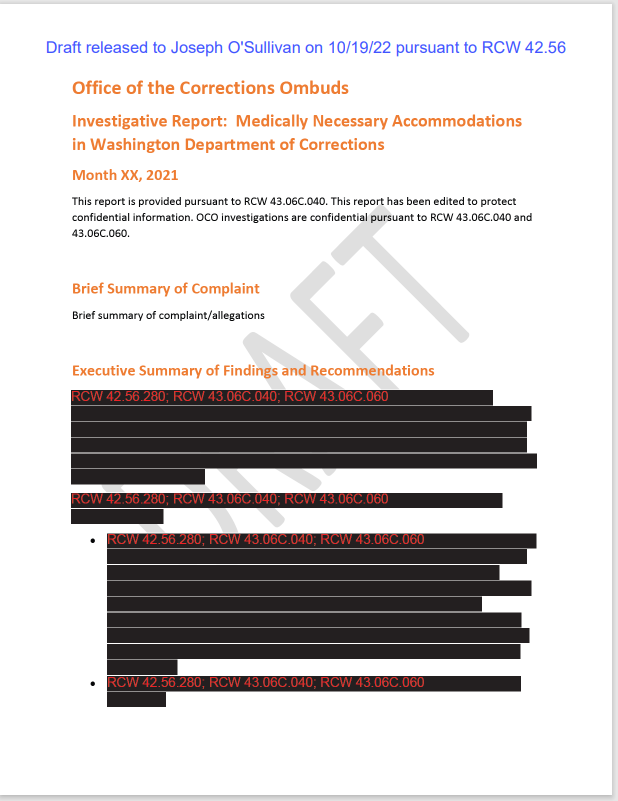 Drafted in 2021, the Office of Corrections Ombuds investigation into health care in Washington's prisons has never been published.

Drafted in 2021, the Office of Corrections Ombuds investigation into health care in Washington's prisons has never been published.

In a Wednesday news conference on his budget rollout, Inslee vowed to try to get answers on what the three redacted and unpublished reports contain.

“I want to get you the answers to that, I don’t have them right now,” he said, after being asked about the reports.

The governor touted some of the work done under his tenure to improve the prisons, which, among other things, have struggled over the years to provide adequate health care. He also credited ombuds office broadly, as well as reports produced under its original director, Joanna Carns, that revealed issues with Washington’s COVID-19 response in the prisons. Inslee noted that Washington’s prisons did better overall than those in many other states in keeping incarcerated people from getting infected during much of the pandemic. Data collected by the Marshall Project through June 2021 confirmed that, with Washington prisons showing lower infection rates than facilities in California, New York, Texas, Florida and other states.

The governor also defended his administration’s decision to not provide more funding for the ombuds office in his new proposed budget.

Between March 2019 and November 2021, the ombuds office published 52 investigative reports, which were often accompanied by separate public responses by the Department of Corrections, which oversees the prisons.

As the ombuds office transitions to emphasize the pursuit of individual complaints made by incarcerated people, and toward quietly reaching consensus with state prisons officials on systemic issues, prison advocates are concerned.

Those advocates include families with loved ones inside the prisons, as well as people currently and formerly incarcerated. Families fought for years to get Inslee and state lawmakers to establish the oversight office.

Melody Simle, a prison advocate who worked on that yearslong effort and who has questioned the office’s shift since Inslee’s two recent appointments, said the inaugural ombuds director fulfilled the spirit of what they sought.

“The intent of establishing OCO from the stakeholder’s position (the people who had to fight for oversight for 12 years) was that someone would speak truth to power and shine a light in the dark corners of DOC,” wrote Simle in an email. “This would be achieved by helping people with individual problems and writing systemic reports. Joanna Carns did that and we are grateful for her work.” 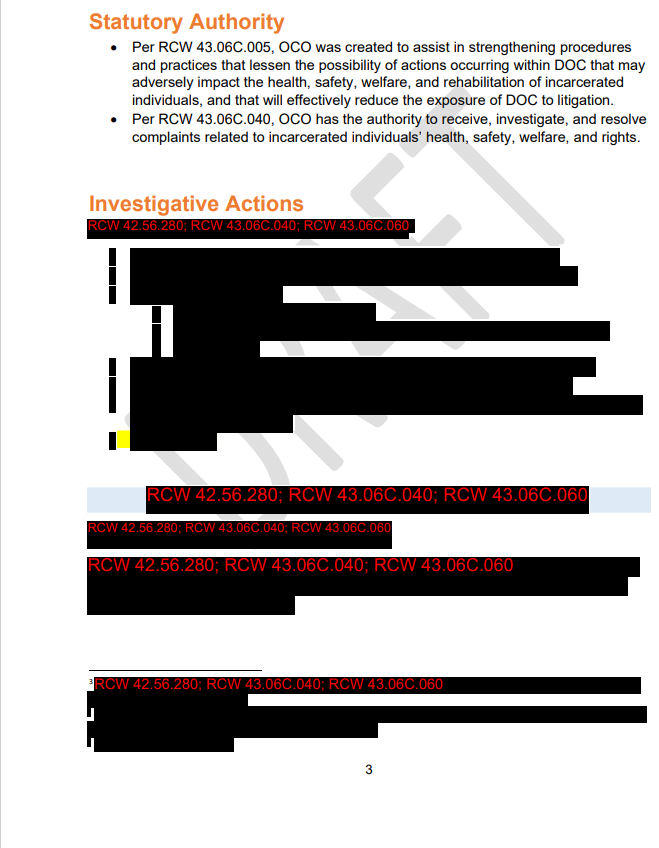 Drafted in 2021, a report on the use of emergency restraints in Washington's prisons is almost wholly redacted.

Drafted in 2021, a report on the use of emergency restraints in Washington's prisons is almost wholly redacted.

Crosscut obtained redacted copies of the three remaining unpublished reports – about 58 pages in total – via a request for public records to the Office of Corrections Ombuds. In its response, the office maintained that since the reports are draft versions, they are not subject to public disclosure, meaning they don’t ever necessarily need to be released.

The copy of the report on emergency restraints is dated October 2021. The document begins on its first page with an unredacted headline that says: “Brief Summary of Concern.” It continues for 17 more pages, with unredacted section headlines like “Summary of Findings and Recommendations” and “Investigative Action.” The text underneath those headings that fill the pages is almost wholly blacked out.

Left unredacted in the copies is the state law that justifies the oversight office’s investigations.

“Per RCW 43.06C.005, OCO was created to assist in strengthening procedures and practices that lessen the possibility of actions occurring within DOC that may adversely impact the health, safety, welfare, and rehabilitation of incarcerated individuals, and that will effectively reduce the exposure of DOC to litigation,” stated the report. “Per RCW 43.06C.040, OCO has the authority to receive, investigate, and resolve complaints related to incarcerated individuals’ health, safety, welfare, and rights.”

The reports on medically necessary accommodations for incarcerated people and a systemic review of disciplinary programs in the prisons are likewise redacted. In her July interview, Robertson said she plans to release some version of the former, but may never release the latter report. And Robertson also said that the report on emergency restraints may never move forward: “Not at this time, with the limited resources that we have.”

In an email earlier this month, Robertson said that work is still being done on all subject areas of all three withheld reports – but added that “The OCO does not have an estimated release date for any of our in-progress systemic investigations. … Our investigative work on the topics that you mention … is ongoing. The OCO staff are working on numerous investigative projects that will be released using a different report out format.”

She touted some of the office’s more recent work, such as the one-page special report released last month documenting the office’s efforts to get proper pay for eight incarcerated people working on state fire crews.

That report, which touts the office’s own success in resolving the issue, doesn’t state how much money was paid to the incarcerated people. But the report added that the Department of Corrections and the Department of Natural Resources – which oversees Washington’s wildland fire response – will finalize a new interagency agreement so that such wages are not withheld again.

Those efforts may not ease the minds of incarcerated people who read or were featured in the broad systemic reports that examined suicide in the prisons and the treatment of transgender individuals inside, and have criticized the office’s recent shift.

One of these is Daniel Perez, incarcerated in the Monroe Correctional Complex, whose story had been included in a draft ombuds report examining retaliation in Washington’s prisons. That report found that corrections staffers improperly gave Perez an infraction in one instance for reaching out to the ombuds office.

Delayed for months, Robertson released that report over the summer. The final version removed the stories of the incarcerated individuals, including Perez’s, that had been in the draft version.

In an interview from the Monroe Correctional Complex earlier this month, Perez said he had reached out to the ombuds office to request they close his remaining complaint.

“I lost faith in their office, because their reports are becoming sanitized,” Perez said. “And I think that defeats the purpose of their office."