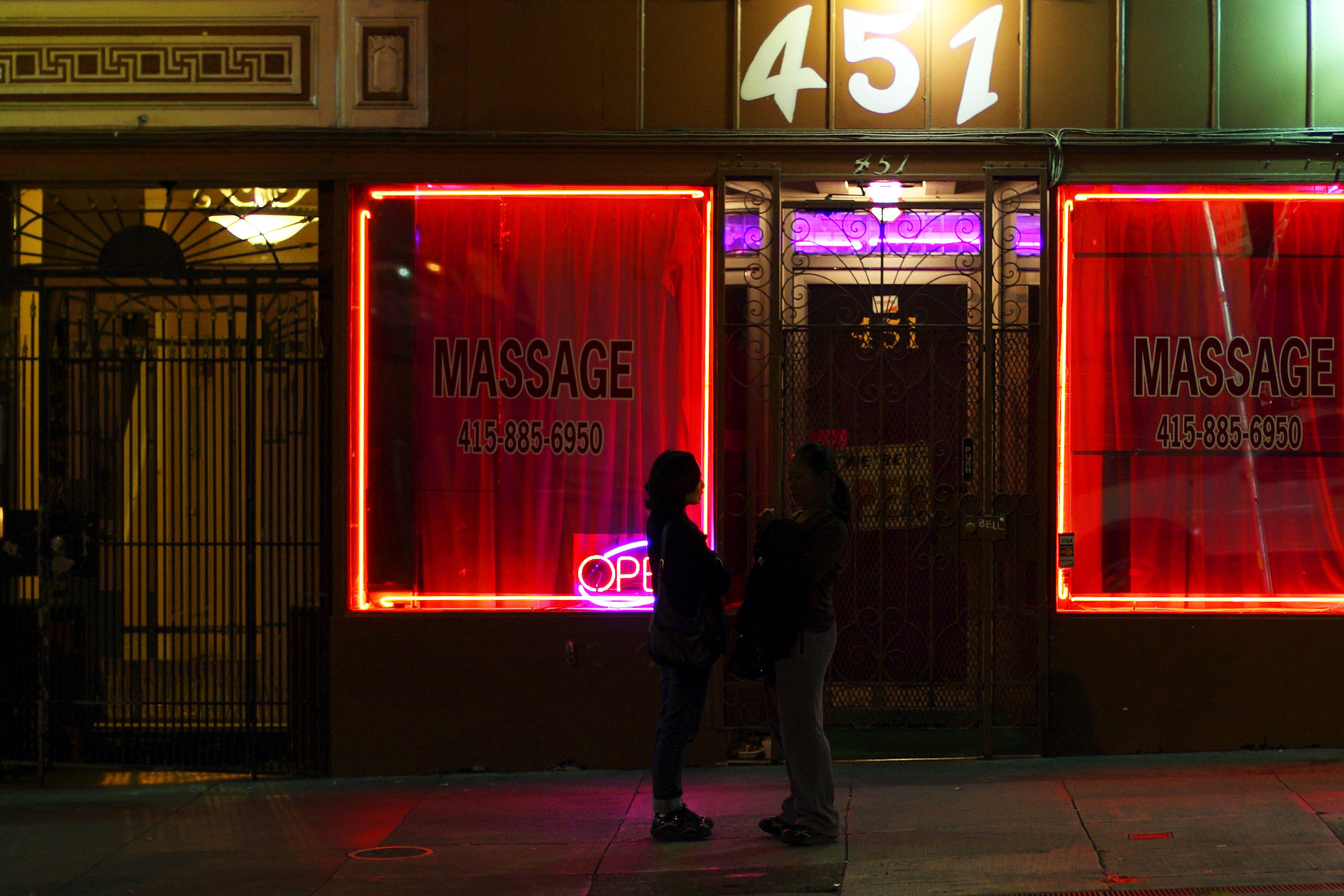 A study commissioned by the Department of Justice found Seattle has the fastest-growing sex industry in the United States, more than doubling in size since 2005. In this five-part series, Crosscut offers an unprecedented investigation into this local underground economy. This is part four.

It’s around 10 p.m. on a Wednesday night, and my friend and I are standing on her balcony, overlooking a stretch of North 85th Street. A slightly paunchy, middle-aged man has just parked his Toyota nearby, and walks purposefully down the sidewalk. As predicted, he stops across the street from my friend’s apartment complex, in front of a small, dimly lit massage parlor. A knock on the door, and it opens to admit him moments later, offering a glimpse of red interior lights. The curtained window offers no hint of the activity inside.

As the owner of a dark sense of humor, the massage parlor amuses my friend. It’s the sort of place you’d never notice driving past. The building’s miniscule size, aged exterior and bare minimum of signage calls no attention to itself. But smoking cigarettes at the end of the day, watching from her balcony as men enter and exit through the nocturnal hours, it’s the most eye-catching part of her view.

We’ve never personally confirmed our suspicion that the massage parlor is of the happy ending variety. However, if you visit the website EroticMP.com – dedicated to reviewing the area’s purveyors of “rub-and-tugs”  – you’ll find it listed.

“You’ll hear that this is primarily a Seattle and Pacific Northwest phenomenon,” says Captain Eric Sano, who leads the Seattle Police Department’s Vice and High Risk Victims Unit. “That’s primarily because we’re a border state, with a huge international airport. They come over the border, they fly in through SeaTac, and it’s a destination city.”

The exact entities behind these businesses are tough to peg. Managed by older women almost exclusively, there’s evidence of overseas connections to China, Vietnam, and Korea in the form of money transfers, and potentially to organized crime in those countries. Indications of a nationwide network between parlor workers is there as well, though local and federal law enforcement can’t make any of these assertions with certainty. The parlors are well-known to police, but they’re also hard to bust and a low enforcement priority.

Whether the Puget Sound’s Asian sex industry is a product of larger forces or simply a series of independent operators, there’s no doubt it is expanding its reach. In what researchers call a fairly unique Seattle phenomenon, this sector of the commercial sex trade is moving beyond the real estate of small, seedy buildings. Its new digs include single-family homes, apartments and condos, often in the middle class neighborhoods surrounding major employers.

These establishments sit in strip malls and low-rent neighborhoods, with exteriors that usually seem averse to attracting clients. Where they were once known through word of mouth, their locations and services are now intricately mapped and reviewed on such online sites as EroticMP.com and RubMaps.com.

Similar to the online community covered previously in this series – in which escorts sell their company, and their customers rank them explicitly – the Internet has brought Asian massage parlors into the open. As such, they would seem like ripe targets for police busts. However, like those online communities, there are aspects of the parlors that alter the enforcement equation.

For one, there’s the sheer difficulty in shutting them down.

“When you think homicide case, you want a video, or DNA, or that sort of evidence,” says Sergeant Jaycin Diaz of SPD’s High Risk Victims Unit. “When we’re going after commercial sexual exploitation, it’s the victims that make the case. In Asian parlors, you can’t get the victims to talk. There’s a language barrier, there’s a distrust for police, there’s probably an element of organized crime where they’re worried about their families back home. It’s tough to address the issue, because it’s tough to make that bond.”

Thus, law enforcement runs into the same problem busting parlors as busting pimps – the women can be coached not to speak. Officers therefore depend on a more mundane path to shut parlors down: licensing. To operate as a massage therapist, you need certification. Without one, cops can close them down.

“You try to shut them down with licensing issues, which are only civil infractions, but would force them to go through the how many hours of massage training,” Sano says. “That would hopefully dissuade [operators] from opening. But we don’t know. These things are money makers.”

The exception, until recently, was parlors that focused exclusively on feet. A law went into effect last summer that changed that, requiring foot masseuses to get certification and be subject to unannounced inspections. Nonetheless, Sano says, “Most places focused on foot massages have prostitution occurring in them.”

Further clouding the situation is whether the parlors’ staff – mostly immigrants from Vietnam, Korea and China – are working against their will. Kathleen Morris, program director for the Washington Anti-Trafficking Response Network (WARN), says the situation is not as clear-cut as some might think.

“One big misconception is that all prostitution involving foreign nationals involves human trafficking,” Morris says. “Yes, we see Asian women brought to the U.S. engaged in sex work, in King County especially… But we’ve encountered many foreign nationals who are freely engaged in sex work, and choose to do that. That’s one perspective we’re not hearing in the public discourse around this issue.”

Morris agrees that exploited and trafficked women are at work in some Asian massage parlors. Both she and Sano award the state high marks in fighting this aspect of the sex trade. “One thing we have in the county is a really dedicated response (to trafficking) that a lot of places don’t,” Morris says. “People here are ID-ing victims and survivors in a proactive way.”

The fact that parlors aren’t necessarily a hotbed of exploited, trafficked labor further lowers the zeal to shut them down, Dank says.

“We’re not seeing a lot of trafficking in Asian massage parlors,” Dank says. Some parlor workers shell out $70,000 or more to get into the country, and then send money to unknown entities overseas to pay the debt, she says. “But overall, the parlors represent more of a prostitution issue than a trafficking issue, so there’s not as much support from the highers up [to fight them]. There’s not much manpower dedicated.”

This might be different if parlors employed underage women with any regularity. However, Dank and the law enforcement officers we spoke with agree that this is not the case.

My friend has never complained about her neighboring massage parlor. Nor have I about a parlor near my West Seattle apartment, also featured on EroticMP.com. An unobtrusive massage parlor doesn’t elicit the same neighborhood reaction as women in hot pants and pumps walking the block. However, the dynamic could change as Asian massage parlors give way to Asian brothels, largely situated in residential zones. Dank says these brothels often surround major employers, such as Boeing and Microsoft.

“This is especially happening on the Eastside,” says Diaz. “You get very nice apartment complexes over there, and [Asian prostitutes] are working right out of it. It looks like any other apartment, but three Asian girls are staying there and conducting business all day long. Over there, they’re probably getting a lot of tech clientele.”

According to the federal study, Vietnamese nationals mostly staff the Puget Sound’s residential brothels, and are also the most likely to run “full service” massage parlors. They have ties to Vietnamese populations in Southern California, and may move prostitutes to and from brothels along a circuit, similar to how gangs move their women. Law enforcement finds many of the women in the brothels have already paid off their passage to the U.S., and decided to continue working.

Brothels offer advantages over parlors, beyond the fact they charge more money. Situated in non-descript residences, they offer a degree of privacy that parlors do not. But given that their employees may often see up to 18 clients a day, it’s hard to imagine they’ll go undetected by their neighbors forever.

Morris says a big reason her organization works with brothel employees is the number of local complaints filed against them given their location “in fairly well-off, middle class communities. Places people wouldn’t expect. A lot of people [we see] have come from working in nice condos or apartments. Someone reported them and law enforcement did the best they could.”

The brothels could be seen as a response to the market, catering to a more moneyed clientele than parlors. Because of their low position on the enforcement totem pole, officers aren’t sure whether the two are connected. But a link could explain some of the extra cash being moved overseas from the parlors. As one local law enforcement officer told the federal study’s researchers:

“I watch these places and all of a sudden I see them ship off ten grand one week, and then ship off ten grand another week. And I’ve got a camera on these places. They’re not doing $10,000 a week in business. They are not. Makes you wonder where the money’s coming from, doesn’t it? … We have no idea [where the money is going], because once it goes [overseas], we’re pretty much done.”

This could indicate shared management between residential brothels and parlors. It could also be indicative of a larger criminal network, which law enforcement has yet to define. The fact that brothel and parlor employees move from place to place to avoid law enforcement detection is further evidence of a possible network. Many seem to rely on a nationwide service to place them in new jobs, Dank says.

“When you think of organized crime, you try to ID one person, group of people, or family who are the flagship, who are calling the shots, pulling strings and collecting money at end of day,” says Dank. “There was a lot of talk (by law enforcement) about this being a network of people. They’re seeing individuals coming in, but they haven’t ID’d the people or group operating the whole ship. The money goes overseas, and that’s the end of the story.”

The federal study that inspired this series states that Seattle’s massage parlors and brothels are, in fact, the most prevalent underground sex economy in the metro area. More than online and street sex, they’re bringing in the most cash. And yet they’re a low priority for law enforcement. What does that say about the future of prostitution enforcement in Puget Sound?

In this series' conclusion: Toward a smarter fight against exploitation

Massage parlors, “happy endings” and the growth of residential brothels

Commercial sex and exploitation: Sorting out the public response

Note: This piece originally ran in late 2014. It is included here because it became one of this year's most read stories.