Did you just say 'The' Puget Sound? 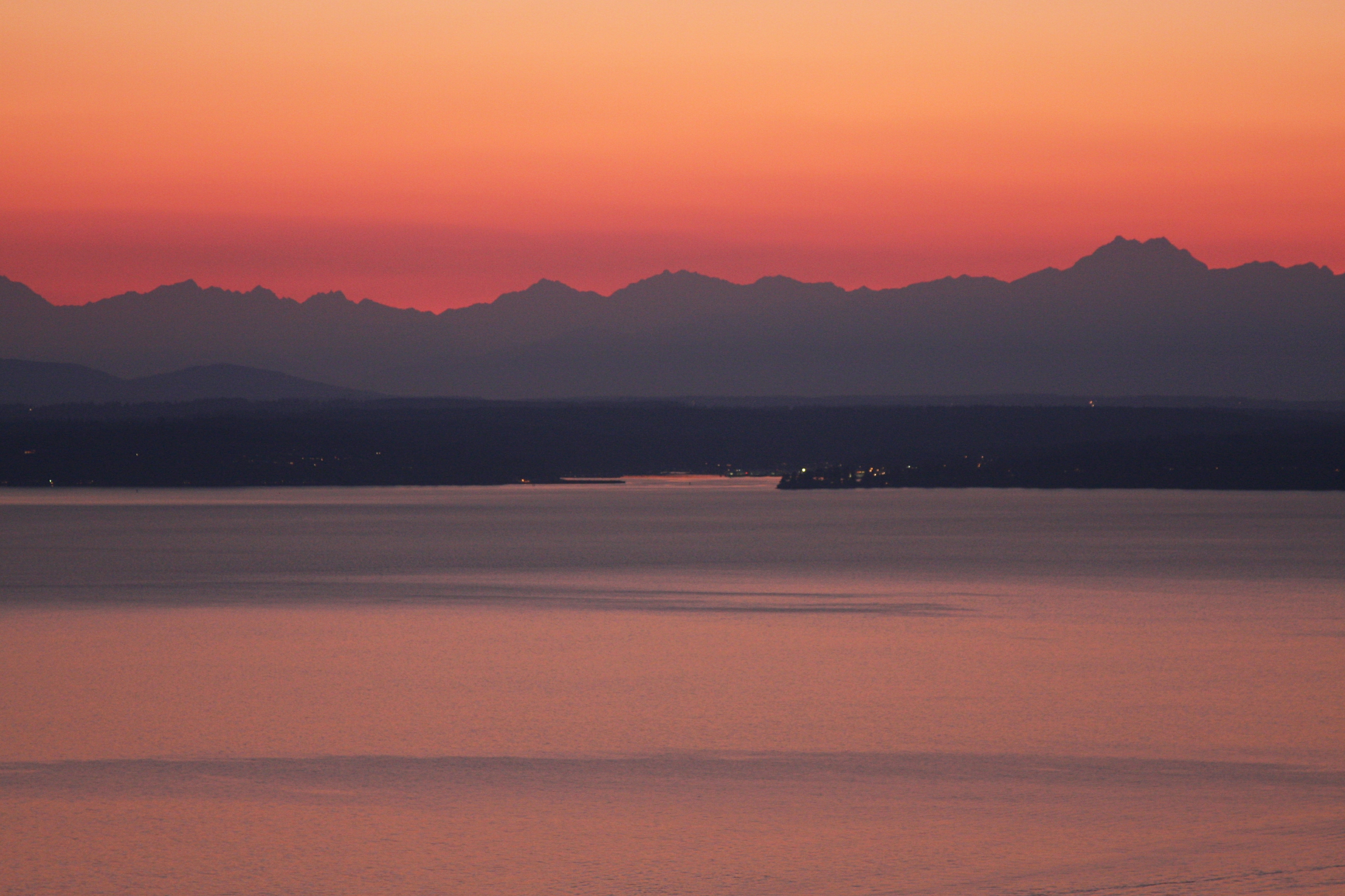 Place names shape what Reuben Rose-Redwood — an associate professor of Geography at the University of Victoria in British Columbia — calls our “geographical imagination.” They are sometimes political, personal, aspirational — or just pure marketing.

Seattle has many examples of naming that shapes our perceptions of self. When Seattle was first settled, it was dubbed “New York,” a named that amused and bemused our competitor. It seemed such an overreach of ambition that locals appended the Chinook jargon term “Alki” to it, meaning “someday.” Still, it was a bold act of imagination from Day One: Seattle was to be a city to be reckoned with.

But Prof. Rose-Redwood says that place names change. They are living things, as is the English language itself. New York Alki became Duwamps, then Seattle, for example. And sometimes more subtly, changes creep into the language. Place names can change because of marketing (think real-estate sales), or branding, or shifting ways of orienting ourselves, or just ways in which residents decide — almost unconsciously — to change something. We can drift into new ways of speaking.

An example: I attended the Denny Lecture at the Museum of History and Industry earlier this year and the speaker, author David Williams, was talking about the regrading of the city (an example of toponymic regrading was changing the “Denny Regrade” to “Belltown”). Williams pronounced Alki — which everyone pronounces as AL-Ki (with a long “i” as in “eye”) — as AL-KEY. It seemed shocking, but it drew instant acclaim from the descendants of the city’s founding Denny family who were in the audience. They insist that AL-KEY is the original and correct pronunciation, though the public has voted otherwise with its tongues. No one in West Seattle says AL-KEY.

I’ve noticed another change creeping into the local lexicon — especially on the radio. Puget Sound is becoming “The Puget Sound.” I hear it in ads all the time, including one recently for Boeing. You’ll hear claims like, “available throughout the Puget Sound.” Some stations don’t allow it (KUOW, for example), but it seems to be a fairly widespread commercial radio thing.

I’ve done some digging on this, and Puget Sound has undergone some shifts over time. When Captain George Vancouver first honored one of his lieutenants, Peter Puget, for his hard work of mapping the place in 1792, he named a branch of the waters south of Vashon Island “Puget’s Sound.” By the time settlers arrived, the possessive “'s” had mostly been dropped, though it popped up occasionally in 19th century newspapers. And there are some references to “the Puget Sound” in national papers in the 1840s and ’50s. But the local reference has been a no to the “the.”

Puget Sound is part of our folklore. In the various versions of the “Old Settler’s Song” the lyrics refer to “A place to live easy and happy/That Eden is on Puget Sound” and “I started one morning to shank it/For the country they call Puget Sound.” Yes, the settlers were happily surrounded by “acres of clams,” and they had no use for the extra baggage of the “the.”

I find "the Puget Sound" as grating as when tourists refer to “Pike’s Market,” though I’m happy to speak, wrongly, of “Boeing’s” or “Nordstrom’s.” Rose-Redwood says that if this is a trend, it runs counter to what usually happens, which is that names often get simplified over time. He cites New York City where he says Broadway was originally “The Broad Way,” and over time New Yorkers dropped “the” and turned Broadway into a single word.

So why is “the” migrating back to Puget Sound? I have a theory, and feel free to shoot it down. I think it’s the influence of California. DJs put “the” in front of freeway names in SoCal, where I-5 is “the I-5.” Perhaps this is because they have lots of named highways: “The Nimitz,” and “El Camino,” which, when I lived in the Bay area, I often heard referred to redundantly as “the El Camino,” especially by car dealers. I’ve also noticed some local radio traffic reports lately saying “the 405” or “the 520.” Also, I frequently listen to 710 ESPN, a local sports-talk station, and their hosts refer to callers by their local area code: “the 206,” “the 415.” As in, “The 360 says Russell Wilson should stop dating Ciara.”

Does all this have anything to do with the fact that the number of residents in Washington who were born in California has doubled since 1970?

My ears detect other changes. How we refer to places — and, importantly, how we change those references — is often significant. Rose-Redwood has written that currently, the origin of a place name is less interesting to scholars than the meaning of that name.

For example, the Industrial Area was once prosaically labeled as such. But in the 1990, the northern section suddenly became SoDo. Matt Sparke, professor of Geography and International Studies at the University of Washington, has studied place names and globalization. Seattle is a great case study, what with our conscious rebranding as an innovative, global, high-tech “world class” city. He has written that SoDo was a conscious choice selected to reflect “Soho/New York/London global city exclusivity.”

The name first went public in Seattle Weekly in the mid-1990s with a cover story by Eric Scigliano called “SoDo Wakes Up.” The story explored the potential for redevelopment of this area “south of the Dome,” or “south of Downtown.” Since there is no more Kingdome, downtown is usually mentioned now. Scigliano, who often writes about south Seattle for Crosscut, tells me that he riffed on other possible names, “SoBro for South of [Royal] Brougham and SoSpo for the sub-district south of Spokane [Street].” But after the Mariners experienced “SoDo Mojo,” the die was cast. The article also inspired the name of the Starbucks headquarters, SoDo Center.

References to other southern parts of the city also seem to be shifting slightly. The term “South End” once referred to the suburban areas just south of the Duwamish tide flats, which were filled in at the turn of the 20th century and became the Industrial Area. South Seattle meant Georgetown and South Park and environs. When I was growing up, South End essentially referred to any neighborhood south of the Lake Washington Ship Canal. Not long after the turn of the century, real-estate developers, like C.D. Hillman (of Hillman City) began developing “Southeast Seattle” — south of Mount Baker along Lake Washington and west to Empire (now ML King) Way. The area was touted for cheap real estate and its ethnic and racial diversity — a place for urban working folk of all races and persuasions. By the time of the Boeing recession of the late '60s and early '70s, South Seattle or Southeast Seattle seem to commonly refer to economically challenged parts of the city south of the Central District. I-90, not the Ship Canal, seems to be the rough border, though the canal is still a formidable barrier in terms of race.

More recently, I am seeing references to South Seattle as Seattle’s “Southside.” I’ve seen it in print (even on Crosscut), but also in names like Southside Commons in Columbia City, a historic former Baptist church that’s run by a social justice-oriented non-profit. The shift from “end” to “side” is intriguing, and it’s hard to suss out its meaning yet. Rose-Redwood says that “End” is sometimes considered more prestigious than “side,” though that might be skewed here because of the relatively affluent Eastside. On the other hand, use of “Southside” is found in Chicago and Tacoma to refer to urban areas noted for diversity, poverty, crime and gangs.

I’ve also noted that South End not only refers to neighborhoods within the city limits, but increasingly to the diverse areas of King County near our southern city limits that have large and growing minority populations. Burien might be now considered “South End.” When I was growing up in the Rainier Valley in the 1950s and ‘60s, we were South Enders, not Southsiders, and anything beyond the city limit was, well, unknown sprawl or farm country.

Seattle is often wrestling with identity issues — blogs and columns, including this one, overflow with speculation about the nature of our civic souls, our process, what is or isn’t the “Seattle way.” I think there are clues to how our geographical imagination is evolving, but I’m not sure what it means, if anything. Only that we’re not only demolishing houses, but we’re restructuring our sense of place at the same time. Our shifting place names might offer some clues as to where we’re headed.