The Northwest's uneasy relationship with fascism 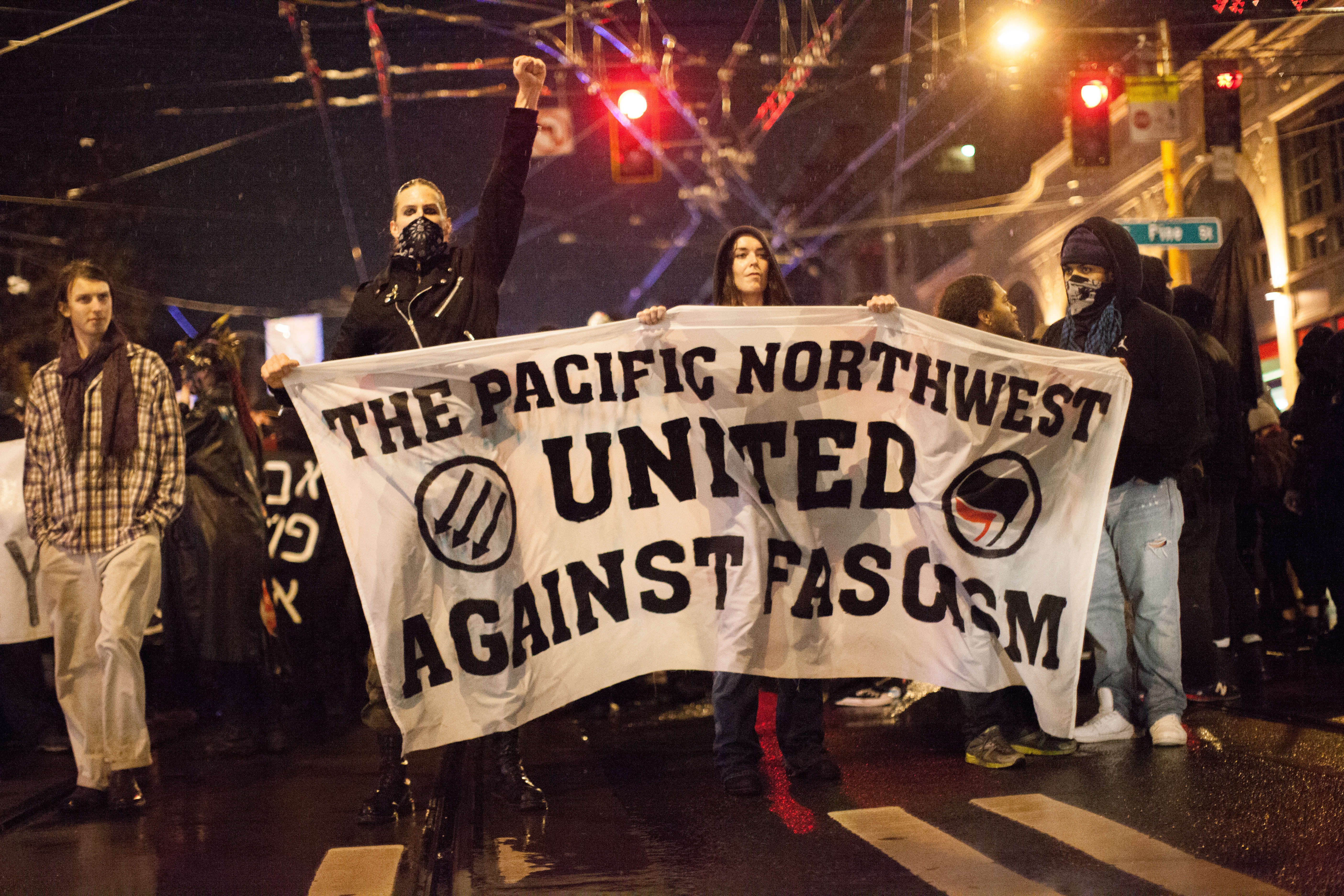 Marchers in Seattle demonstrate against fascism and racism on Sunday.

Fascism is in the air these days. Washington Post columnist Dana Milbank called Trump “America’s modern Mussolini.” We have been here before — and by “we,” I mean not only the country but Seattle and Washington State. There was a time when many people here embraced fascism.

Fascism is in the air these days.

Last Sunday, protesters against fascism marched on a rainy night on Capitol Hill in response to a rumored appearance of Northwest neo-Nazis in Ballard. Donald Trump’s critics are raising the “F” word in relation to his campaign rhetoric and his proposals to register Muslims, monitor mosques and ban all Muslims from entering the country. Washington Post columnist Dana Milbank called Trump “America’s modern Mussolini.”

We have been here before — and by “we,” I mean not only the country but Seattle and Washington State. There was a time when many people here embraced fascism. These people met in Seattle’s halls, they marched down Seattle’s streets. They were the people next door, white, middle-class folks who opposed immigration. They touted their Christian values, their Americanism, and compared themselves to patriots like the Minutemen and Paul Revere. They believed in the racial superiority of whites and questioned the legitimacy of the U.S. government. They were told to arm themselves for a coming war between good an evil — one ordained by God that would ring in a new Millennium. As one of their local leaders, a man who ran a University District diner said, they wanted “to save America the same way Hitler saved Germany.”

In the 1920s and ’30s, right-wing groups flourished amid economic and political tumult. The Ku Klux Klan revival of the 1920s took root across the country, including the Pacific Northwest. Populist politics flared in the 1930s with demagogues like Huey Long of Louisiana, and fascination with fascism percolated in the Northwest, where, historian Karen Hoppes documents, there were 20 independent groups with a fascist ideology operating between 1924 and 1941. Nationally, such groups blossomed in the mid- to late-1930s, propelled by the Depression, New Deal, and the situation in Europe.

It was a time of ferment, and Washington — a young state whose population had a particular penchant for new movements right and left, and a lack of loyalty to old forms of party or politics — proved to be fertile ground for experimentation, and extremism. The writer Mary McCarthy, born and raised in Seattle, tried to explain the atmosphere to the readers of The Nation in 1936. Washington’s politics, she wrote, were “wild, comic, theatrical, dishonest, disorganized, hopeful…”

In 1933, a former Hollywood screenwriter named William Dudley Pelley, who had developed what he said was a personal communication with God after a near-death experience, found inspiration in the fascist movement in Europe. He later said his mission was foretold by a prophecy that linked his future with the rise of Adolph Hitler, whom he called a “man of destiny” and a “winner.”

Pelley founded the so-called Silver Shirts, America’s answer to Germany’s Brown Shirts and Italy’s Black Shirts. They wore silver-gray uniforms with blue ties and a big red “L” over the left shirt pocket, standing for “Light, Love, Loyalty and Liberation.” They wore black boots or leggings and Sam Brown belts, and organized into lodges in many states. By 1934, they were established in 12 states concentrated in the Midwest and the West Coast, their stronghold. National membership may have been as high as 15,000, though they ultimately claimed up to 75,000 followers in 47 states.

Pelley had certain Hitler-like qualities: a short man with a magnetic personality, intense eyes, striking facial hair — a clipped Van Dyke goatee. He was a prolific writer and publisher of political and spiritual tracts. In many respects, he was, as one writer has put it, a “New Age Nazi,” a kind of J.Z. Knight of American fascism. He channeled or communed spiritually with figures from the past and with God himself. One of his followers said, “He has a clairaudient ear. He hears voices that no one else hears. It only takes him a few minutes to get in touch with God.”

Pelley believed that a cataclysm was approaching, a notion that appealed to Christian fundamentalists. The New Deal, he claimed, was part of a vast global Jewish conspiracy and the Jews and Communism would ultimately be defeated in a final battle that would bring in a new Christian Commonwealth. Hitler wanted a 1,000-year Reich; Pelley wanted Armageddon. His revelations, he said, were supported by secret prophesies foretold in the design of the Great Pyramid in Egypt.

“Fascism cannot be explained only in terms of fanaticism, the history of the places where it gains a lodging must be taken into account.””
— Northwest author Robert Cantwell, 1939

To prepare for the day of this great reckoning, Pelley wanted to raise a Christian army. His followers in Southern California were particularly militant, and armed themselves with Springfield rifles purchased illegally from the Naval armory in San Diego. But all Silver Shirts were urged to arm themselves. Pelley’s publications made barely veiled threats. One issue of the Legion’s magazine, New Liberation, featured an editorial hinting at assassinating Franklin Roosevelt: “Make John N. Garner U.S. President,” it stated, referring to the Vice President who would become commander-in-chief if Roosevelt died.

Pelley and his followers spewed anti-Semitism. Jews, Pelley said, would be rounded up and placed in “Beth Havens” reservations. He also promised a “pogrom of colossal proportions.” One of his top aides pledged to a Tacoma audience, “When we eliminate Communism and Jews from the United States it will not be with ballots, but with guns, wading in blood.” Pelley himself tried to soft-pedal this agenda by calling his movement “an altruistic expression of militant Americanism.”

Pelley ran for president in 1936, and while he campaigned in a number of states, he only got on the ballot in one, Washington, with its open primary and low-bar ballot rules. He founded the so-called Christian Party, which ran a full slate of candidates for state and Congressional offices. Pelley relocated to Washington for the duration of the campaign. He barnstormed the state with a “Silver Cavalcade” of West Coast Silver Shirts following in a convoy and setting up encampments as they went. In his first speech in June 1936, he had a crowd of 300. At a speech and rally at Seattle’s Moose Hall his audience numbered 1,000.

Pelley’s Washington supporters reflected the appeal of the Silver Shirts nationally: middle class, married, native-born men and women from small or medium-sized towns and cities. According to election filings at the state archives, the Christian Party’s local stalwarts included a cement finisher, an osteopath, an accountant, a newspaper editor, an attorney, a school superintendent, and a local beauty queen who ran a health-food store at the Pike Place Market.

They fell into the gap between big labor and big money — Communists on the left and on the right, the corporate and banking interests that were alleged to be part of the insidious international Jewish conspiracy. They lived in Seattle, Everett, Tacoma, Spokane and Yakima, but also small-town areas like Centralia, Chehalis, Whidbey Island and Port Orchard. One avid supporter was a teacher and school principal from Redmond, Rubie Johnson, who ran for Superintendent of Public Instruction on the Christian Party ticket. She and her husband were so devoted to the cause that they loaned a large cabin on property they owned as a Legion hangout called the Silver Lodge.

The Christian Party lost. Pelley received only 1,598 votes statewide out of 692,000 cast. He got fewer votes than the Communist candidate. Roosevelt was elected in a national landslide. It was, said one scholar, an “ignominious rejection.” Undaunted, Pelley moved back East once he found that Millennial cataclysm was going to have to wait for another day, and another revelation.