Livestream of the year: Local man both robbed and arrested in single minute 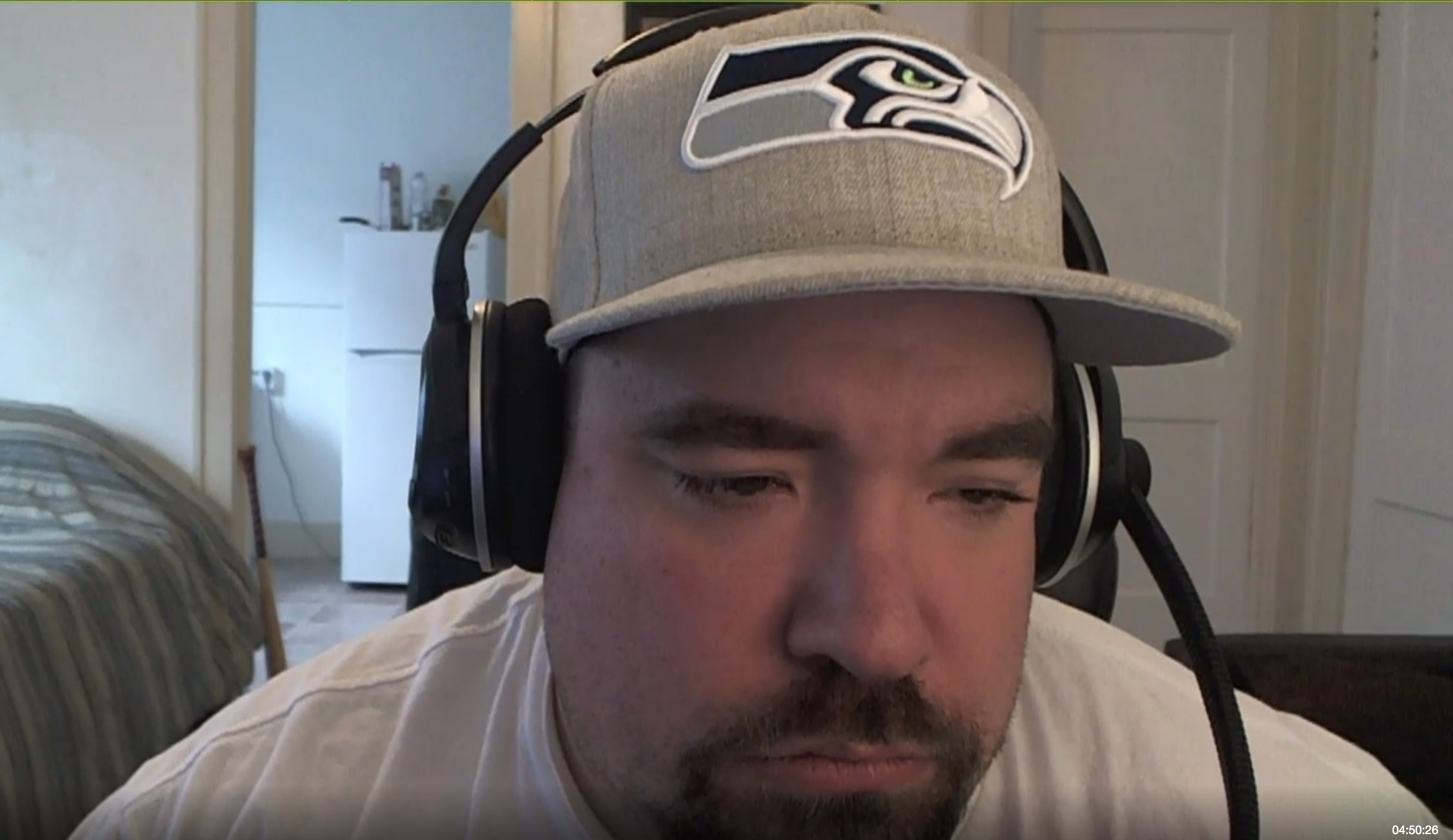 Local video gamer and Twitch user Mr. Big, maker of this year's livestream of the year.

When Amazon bought Twitch for $970 million last year, I’ll admit to being baffled. Twitch is a company that offers an online platform dedicated to video games. Specifically, broadcasting live feeds of people playing video games on their computers and consoles.

Stay with me now, because this all may sound strange to those without intense, symbiotic relationships with their electronic devices. But in the last few years, watching complete strangers play games online has become a pastime for millions. If the player is skilled, they can earn millions in the new field of “e-sports”, an entertainment genre that Twitch helps enable. If the person playing those games is especially personable, they can become YouTube’s most popular person, securing interviews with Stephen Colbert, the direct mockery of South Park, and nearly 40 million subscribers.

Ever played video games with someone who talks too much and hogs the controller? This is a major new industry based on that concept, with big money involved. But its success aside, many continue to look down on it, and question Amazon’s nearly $1 billion investment in its future. I once numbered among these skeptics. That is, until I watched a Washington-based Twitch user get both arrested and robbed in the span of a minute, live on video. My opinion of genre's participants remains unchanged, but I now see the merits of having video game addicts broadcast their personal lives for a dozen or so hours at a time. It can yield some legitimately entertaining footage, much as a thousand monkeys at typewriters will at some point produce Shakespeare.

Not much is known about the victim in question, Mr. Big – who prefers to spell it Mr_13ig (we won't be doing that). He’s 36, lives in Washington State, and enjoys playing games for over 16 hours straight. He frequently ducks off screen to smoke an unnamed substance, emitting huge plumes of smoke afterwards. He has over 10,000 subscribers to his Twitch channel, and people appear to have donated thousands of dollars to support his lifestyle. One assumes he sleeps and eats at certain points in the day. At the moment of this writing, he’s using a large virtual rifle to unload upon the heads of virtual zombies. His facial expression is mellow to the point of boredom, like he's clipping his fingernails or whittling something simple.

Considering these plumes of smoke, the Bob Marley poster on his wall, and the fact he spends much of his waking life in digital fantasy worlds, one could reasonably infer that Mr. Big is an easy-going fellow. As further evidence, his profile picture recently depicted him in a space suit, smiling as he drifted through space, a number of large, raw steaks drifting along with him. That is not typically the profile picture of an uptight man.

But Mr. Big has some simmering anger and authority issues, which clearly manifested when the police arrived at his door at around midnight in October. The livestream is below (it may not load on some mobile devices). Skip ahead to about 14:47:00 for the action (yes, the footage is over 14 hours long), or you can click here.

The police arrived at Mr. Big's door because, beside video games, another feature of his Twitch broadcasts is loud music. Puff Daddy’s timeless 1997 classic “Can’t Nobody Hold Me Down”, for example. That sort of song can enhance the enjoyment of video games, no question. But in an apartment building like Mr. Big’s, playing songs like that at high volumes in the dead of night – punctuated by his screaming at games in cider-fueled fits of emotion – can also lead to complaints from neighbors.

The exchange with police starts on a light note. The officer asks Mr. Big for his name. Mr. Big explains his last name is America, and inquires if the officer wishes to shoot him. It escalates from there, as Mr. Big continues to refuse to give the officer his name, talks about his rights, and informs the officer he will soon close the door in his face.

“Your door is not going to close though, ok?” the officer responds.

“That’s what the last cops who came here told me, and then I closed my door. So yeeaaahhh...”

The friendly banter continues from there. Mr. Big describes his “druggy” neighbors, clarifying he smokes pot and drinks beer exclusively, as a way of explaining the cops are barking up the wrong tree. The officer notes Mr. Big causes more problems in the apartment building than his neighbors, hinting at past complaints. To which Mr. Big essentially calls the officer an idiot.

The officer starts getting visibly irritated at this point. Mr. Big continues discussing his rights, shouting over the cop, and noting he has over 60 people watching live on Twitch. At some point in the conversation, he mentions firearms and a baseball bat he owns.

“Don’t violate my rights because you will be fired for it, real quick,“ Mr. Big says, crossing his arms.

The officer attempts to defuse the situation by seeking common ground with Mr. Big. Looking past him and into his apartment, the officer asks if his computer is Alienware, a gamer-oriented brand of PC made by Dell. This backfires. Mr. Big is having absolutely none of it.

“Did you just ask me if that was an Alienware?“ Mr. Bigs asks with the deepest incredulity. “Alienware is for 'noobs' who don’t know how to build a computer.”

Eventually Mr. Big’s sick burns and bad attitude become too much for the officer. He gets led into the hallway, handcuffed, and arrested, his protests and discussion of his rights never letting up for a minute along the way. The door is closed behind him, but it is not locked. The livestream keeps on rolling.

At this point, the entertainment value of the video is already pretty high, hovering somewhere around a good segment from the show Cops. That bar is raised when Mr. Big’s neighbor – seen earlier in the video lurking in the hallway – enters the scene less than a minute after the arrest.

Swinging the door open with a confidence and directness seldom seen outside of Seinfeld’s Cosmo Kramer, the Adidas-clad neighbor pauses at the entryway, surveying the spoils before him. He then moves decisively, picking up a pair of Nikes and Mr. Big’s gamer headphones before hightailing it out.

After a brief lull he returns, this time moving with a bit less haste, and a bit more thoughtfulness about what he can steal. He grabs a cellphone and a few more items before calling it a day. Later, Mr. Big will inform viewers that his neighbor "is in jail on felony charges. My property was returned to me and I'm currently fighting for my erroneous charges to be dismissed."

There’s been golden footage on Twitch this year. On the slice-of-life side, there was also the man who accidentally set his apartment on fire. Recently the service started airing re-runs of mellow PBS art teacher Bob Ross, which has attracted millions of viewers. The live comments on that one are something to see.

But as e-gaming superstar PewDiePie told Stephen Colbert in a recent interview, the key to this new genre is forming personal connections – specifically, personal connections with the strangers watching you play video games. After witnessing the travails of Mr. Big, I can see what he means. I feel like I know Mr. Big to some extent, and want to know more. Those I’ve shown the footage, even non-gamers, feel the same. We want to see more cops called to Mr. Big's door, just to see how he'll react. And if the service can continue to produce footage of this quality, even inadvertently, perhaps Amazon’s $970 million bet on Twitch was safer than assumed.