As faith leaders proud of what Seattle has achieved yet desperate to secure a lasting peace in our city, we implore our local leadership to use its purchasing power to push gun manufacturers toward greater responsibility. The companies should tell us about their distribution standards and invest in 'smart-gun' technology.
by / December 8, 2015 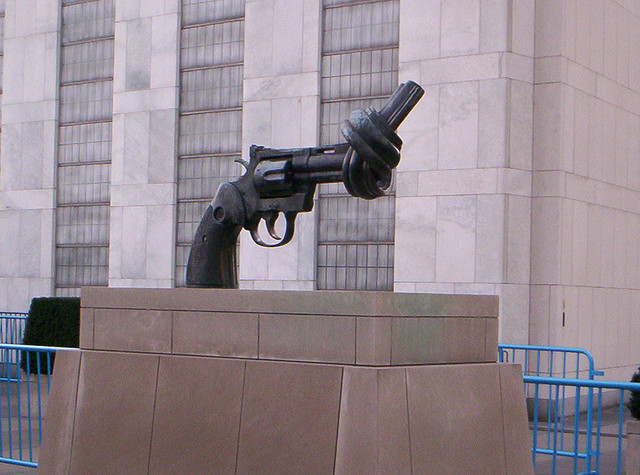 A sculpture outside the U.N. headquarters in New York

As faith leaders proud of what Seattle has achieved yet desperate to secure a lasting peace in our city, we implore our local leadership to use its purchasing power to push gun manufacturers toward greater responsibility. The companies should tell us about their distribution standards and invest in 'smart-gun' technology.

Washington state, and Seattle more specifically, can take great pride in the recent dramatic and pioneering improvements achieved through the political process. The passing of state Initiative 594 requiring universal background checks on gun purchases and Seattle’s phased-in $15 per hour minimum wage ordinance place our corner of the Pacific Northwest on the leading edge of successful and impactful social change.

But we must not rest on our accomplished laurels.  Particularly in an era of paralyzed partisanship and moneyed influence corrupting the political process, we must leverage the momentum of grassroots movements for common sense change.

The benefits of I-594 on the safety and well-being of our state are indisputable. But more must be done to secure a community free from the fear of schoolyard mass murders, supportive of law enforcement to protect us in the face of a tidal wave of illegally acquired guns, and respectful of the balance between cherished rights and responsible, legal firearm ownership.

We call on Mayor Ed Murray, Police Chief Kathleen O’Toole and the Seattle City Council to join the growing list of American cities in using our purchasing power through market forces to encourage gun manufacturers to take sensible action for public safety. First, the manufacturers should insure that guns are sold only to responsible dealers, cutting off the 1.2 percent of disreputable agents who sell nearly half of all illegal guns discovered in firearms trafficking investigations, according to a 2000 report of the federal Bureau of Alcohol, Tobacco, Firearms and Explosives. Second, they should invest in the promotion of user-authentication (“smart gun”) technology that limits the illicit use and accidental misuse of guns.

The first step is to join with more than 80 jurisdictions in 15 states to submit a Request for Information to the seven gun manufacturers who do business with the public sector agencies responsible for 40 percent of gun and ammunition sales in the United States. While these initial inquiries have requested basic information about distribution standards and technological ability, gun manufacturers have been unresponsive so far. Next, our city can require bidders on firearm contracts to answer the RFI, begin to accrue and publish data on which brands of guns are recovered in crimes, and explore and assess smart gun technology for law enforcement use. We hope to soon reach a tipping point, as a growing chorus of conscientious communities link their taxpayer-accrued dollars to rightful demands for critical change.

If it is truly to remain a progressive beacon in the Pacific Northwest, Seattle must join this historic effort to secure public safety over corporate profits.

This month marks the third anniversary of the Sandy Hook massacre, in which an all-too-easily armed assailant snuffed out the souls of 20 6-year-olds. Many thought that this would be the tragedy to end all tragedies — transforming hearts and minds toward real change. Yet almost 100,000 of us have died from gun violence since then, as profiteering gun manufacturers and their purchased politicians thwart even the most basic and sane safeguards against the abuse of guns and the senseless death left in its wake.

As faith leaders proud of what we’ve achieved yet desperate to secure a lasting peace in our city, we implore our leadership to not let these innocents die in vain. Let us put our money where our mouths and hearts are. Join the raised voices at donotstandidlyby.org, a name taken from a verse in the Book of Leviticus, reminding us that we are responsible for the flourishing of injustice and evil as much in our passivity as in our actions. This is a chance for our city leaders, and for all of us, to act for good, for life and for our future.