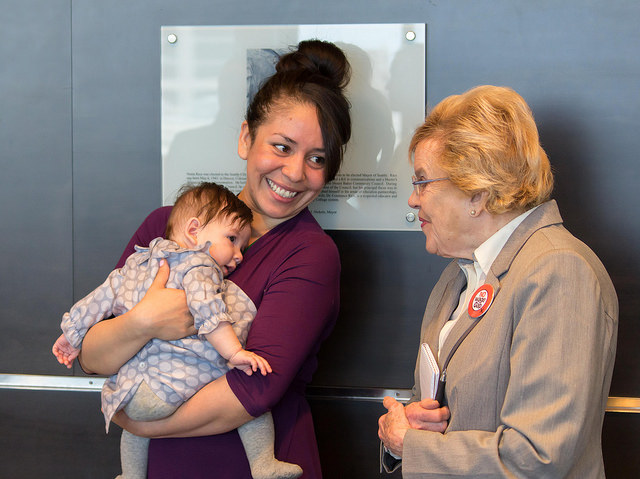 Jean Godden, right, wearing her 'No Wage Gap' button at the signing of a bill on paid parental leave, another cause she has championed.

Women in King County make considerably less than men. In 2013, the women along the shores of Puget Sound and Lake Washington earned 76 cents to every man’s dollar — roughly on par with national statistics. Voices in local government have been sounding the alarm — Councilmember Jean Godden’s “No Wage Gap” button has become a staple of City Hall and the City passed a 2014 resolution committing itself to gender equity. But the needle has budged only slightly overall and at the current rate of pace, wage equity isn't projected to be a reality locally until 2071.

The lead in the conversation jumped from government to the private sector Tuesday as Meadow Johnson and Lisa Harrison of the Seattle Chamber of Commerce presented the “100% Talent” initiative to the Seattle City Council’s Parks, Seattle Center, Libraries, and Gender Pay Equity Committee.

The effort sidesteps legislation in favor of voluntary enrollment from local employers that must pledge to work toward closing the wage gap. Next Monday, the full council will consider a resolution, passed out of committee Tuesday, that would have the City sign on to that pledge.

While a legislative approach could, in theory, require businesses to show progress toward closing the wage gap, 100% Talent is a business-led effort. By becoming a part of the “compact,” as the Chamber calls it, an employer is agreeing to identify internal gender equity issues, share best practices with other employers, invest some yet-undetermined amount in the initiative and agree to three “best practice solutions.”

The last piece – best practice solutions – is perhaps the most unusual aspect of 100% Talent. Employers are given a sort of menu of 31 so-called best practices from which they can choose their best practices. These solutions include trainings, salary evaluations, gender-blind applicant screenings, diversity workshops and more.

In exchange for an organization agreeing to the initiative, the Chamber will provide training and, according to the resolution, “other tools to support gender-equity work.” According to Lisa Harrison, the director of 100% Talent, the Chamber hopes to have 100 businesses in the next 18 months and 500 in five years.

The focus on the wage gap was an extension out of the Chamber’s Women in Leadership efforts, carried out in collaboration with U.S. Sen. Patty Murray. Liz Vivian of the Women’s Funding Alliance approached the Chamber and encouraged it to move forward with more discussion about wages. The organization felt around a bit and found that there was a 100% Talent initiative in Boston.

Megan Costello, executive director for the Office of Women’s Advancement for Boston Mayor Marty Walsh, says that 100% Talent is a reference to needing to tap into 100 percent of the talent pool. As a part of the Mayor’s Office, Costello says that while Boston could consider legislation, “we also need to do something to shift the culture. If we rely on legislation alone, we won’t shift the culture. Understanding from a voluntary perspective – you get much more buy in.”

The initiative began before Mayor Walsh took office, but according to Costello, the current administration has focused on building out a data collection infrastructure to provide snapshots of wage data and the progress made.

Enrollment in Boston is relatively low — about 60 businesses — but Costello says they have spent this year developing the program, including data collection and negotiation training sessions for women, and will focus on recruitment later.

In Seattle, the approach is flipped, setting more aggressive goals for recruitment while building out measurement later. “Right now, we’re just trying to cast a wide net,” says the Chamber’s Harrison. Seattle does not currently have the ability to collect quantitative data. “It was a group decision that we would keep it qualitative,” says Harrison. “Overall we’re keeping it more to stories — successes, what’s working.”

At first glance, the requirements for becoming a member of the initiative are relatively low. For example, one of the 31 best practices is an employer must “Demonstrate that gender diversity is a high priority.” Without quantitative measurements, it’s a little unclear what burden an employer would face in checking that box.

Morgan Beach, a member of the Seattle Women’s Commission and a former city council candidate, finds this concerning, although she likes the initiative generally. “I think it needs some teeth," she says. "They don’t have any enforcement rules around it.” (Beach applied to head the initiative, but was not given the job, a disclosure she readily offered.)

Beach says she thinks the data part is extremely important. She also worries that the focus could skew toward downtown and corporate businesses, perhaps not reaching broader sectors of the work force where it might be most useful.

The one piece that Beach, Seattle’s Harrison and Boston’s Costello seem to agree on is that the Talent 100% approach is a big step forward for the conversation around wage inequity, and a step that is appropriate for the city and county level. “Cities are really where the action is happening right now,” says Costello. “With the political climate at the national level, it’s hard to get things done.”

The hope is that, as the conversation builds momentum, it will snowball at a political and an individual level. By pushing these training programs and these conversations, women will be more likely to speak out. “It builds a sense of community,” says Costello. “When 15 to 20 other women are trying to navigate this as well, it doesn’t feel as lonely.”