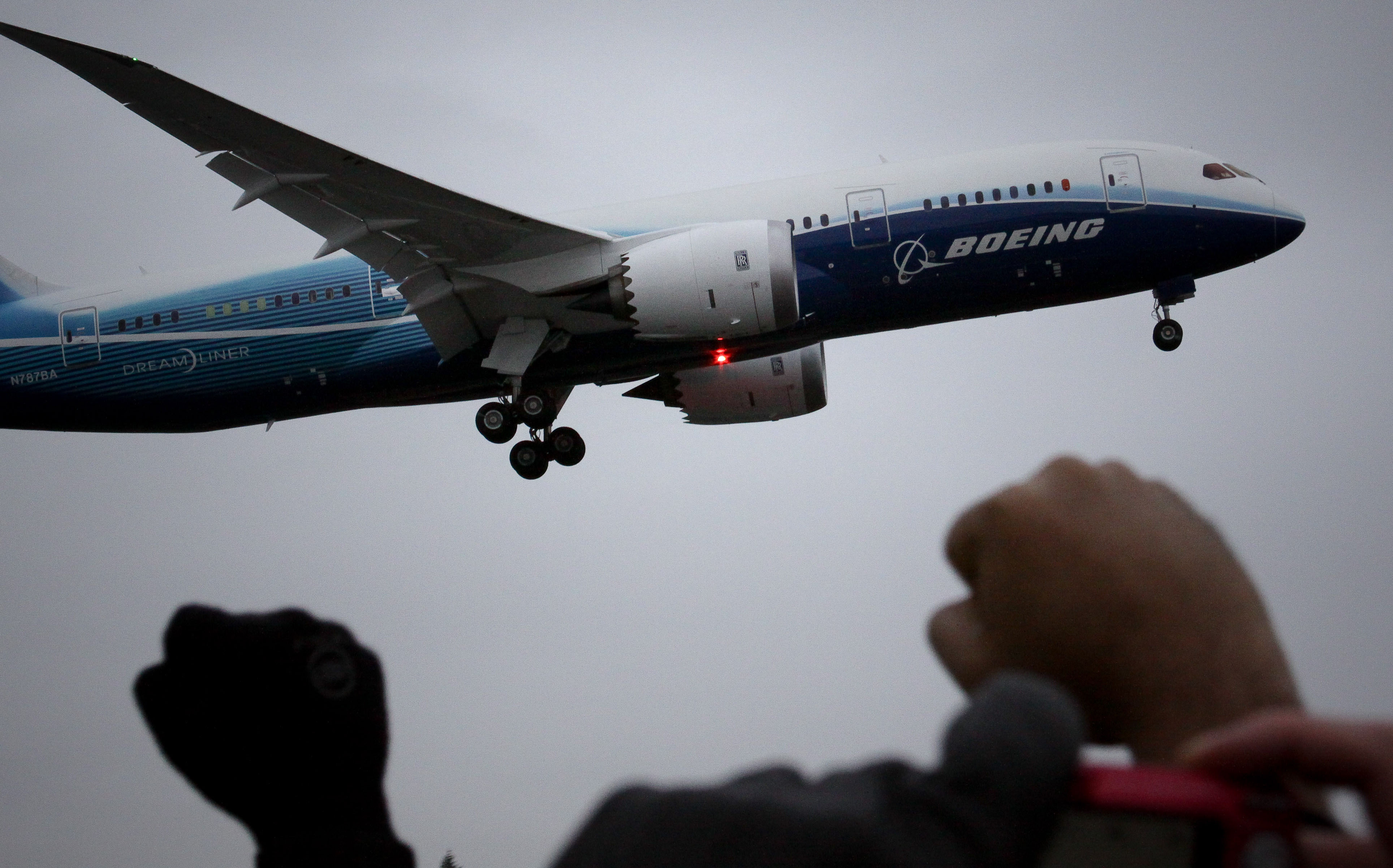 The first flight of the Boeing 787, held in Washington.

As much as at any time in recent memory, the message found a sympathetic audience in lawmakers, who called the hearing on a proposal by Rep. June Robinson, D-Everett, to link state tax breaks for the company to the number of jobs it creates. The proposal is one of four since 2015 seeking to add hard accountability measures to what amount to the largest tax relief package given to any private employer in the nation.

While all but Robinson's are unlikely to pass, the four bills collectively point to a larger shift in Olympia: The Lazy B is losing some of the trust it has long enjoyed among lawmakers.

“Tax breaks are predicated on growing the industry,” Robinson said before the hearing. “That’s not what’s happening.”

The relationship between Boeing and Washington's legislators is a famously cozy one. Governor Jay Inslee called a special session in November 2013 —two months before the next session was due to start — just to give Boeing a tax break worth $8.7 billion. Well before that, legislative insiders talked about the traffic back and forth between the legislature and a house owned by the company just off the capitol grounds, kept especially for entertainment and meetings between lawmakers and Boeing lobbyists.

Inslee’s tax break package built on a deal crafted in 2003 by then-Gov. Gary Locke. Both deals had a single point:  jobs. Specifically more of them, with the growth spread out over years to come as the company built the 787 Dreamliner. But critics, including Boeing’s two largest unions, say the opposite has happened: Jobs have left the state, and ended up in states like Alabama and South Carolina, where Boeing has opened new facilities.

After the 2003 tax break, Boeing employment in Washington did grow almost every year until 2013. That year, the second tax break was supposed to reward a further boost in Washington employment, but instead the opposite happened — employment numbers in the state continued a slide that had begun earlier that year. In the two years since the tax break the company cut about 4,000 jobs, and is down more than 6,000 since 2012.

Now, the sentiment behind Robinson’s proposal appears to be spreading. While she proposed the same bill last year, this year it found a warmer reception. It has more co-sponors, 14 up from nine, including two Republicans for the first time. And one of those liked the bill enough to co-sponsor it - Richard DeBolt, a 20-year representative with nine years as leader of Republican minority in the House.

Robinson's measure would set up a baseline of Boeing's current Washington employment, around 83,300 workers, to measure the value of tax breaks in the future. The company could face loss of half its tax breaks if employment fell by 4,000 workers, and potentially all of the breaks if 5,000 or more jobs were lost.

DeBolt said in an interview before Tuesday’s hearing that signing onto the bill was a straightforward choice. The original tax break seemed to produce results, he said, but after the jobs decline, he wants Boeing to prove its intentions to continue growing in the state.

“As a good steward, Boeing needs to live up to what the intent of the legislation was,” DeBolt said. “I want them to understand that we’re paying attention.”

At the heart of the issue is the basic — but surprisingly contentious — question of whether the tax breaks are succeeding.

According to its critics, the answer is clear: jobs have been leaving Washington since 2012. New job creation has been happening outside the state. In 2008 and 2013, Boeing opened facilities in Alabama and South Carolina, and later announced a research facility in Missouri. It also said it would be sweetening a major purchase deal with China by building a finishing center there.

Altogether, according to its own data, the company has created more than 10,000 jobs elsewhere in the country since 2008. Washington job growth was on track to exceed that until — ironically — the year the second tax break was signed. That year Boeing employment in the state started sliding, and by the end of 2015 Washington had grown by less than half as much as Alabama and South Carolina in the period since their new facilities opened.

Boeing representatives at the hearing painted a different picture of the place and priority of Washington in its larger strategy, while avoiding any direct answers about the job losses. Instead, the company’s state lobbying director, Bill McSherry, pointed to the proportion of Boeing’s employees in Washington, as opposed to other states.

When the first tax break was passed, McSherry said, only about a third of Boeing’s employees were in Washington. By the time of the second tax break, nearly half of all Boeing employees were Washington employees, a figure he insists holds true even after the recent losses. It reflects the fact that the company as a whole has shrunk by nearly 7,000 jobs over the same period.

Reality, as always, could be somewhere in between the two interpretations. Job creation has indeed happened elsewhere, not only outside the state, but outside the company. This includes via Boeing’s famously ill-fated experiment with outsourcing some parts of the 787, which led to unexpected fires. Some jobs have also gone to robots – the new Everett plant required fewer people than expected to work on the 777X wing.

Altogether, it adds up to at least a partial explanation of how Boeing has shrunk by about 10,000 employees since 2011 — even as total orders for its aircraft climbed 59 percent over the same period.

After Tuesday's hearing, a Boeing public relations staffer stepped between reporters and McSherry, who quickly left the room. When asked about the decline in employment on the spot, and later via email, the staffer would only refer to transcripts of McSherry's remarks.

A new generation of legislators is approaching the question of Boeing’s tax breaks in a new way, said Rep. Gael Tarleton, D-Seattle, on Wednesday. Tarleton is the floor leader of the Democratic majority in the House.

A full third of the members of the House of Representatives are relatively new to state politics and the legislature, Tarleton said, and didn’t rise up through the same system as their predecessors, where the name Boeing was synonymous with a homegrown company that needed a boost to take off.

Instead, representatives who entered office to face a multi-billion dollar budget hole – because of the Supreme Court’s McCleary education funding mandate – see a now-Chicago-based company getting the largest tax break in the nation, and wonder what's justifying it.

Whether boosted by new legislators or not, the issue has renewed traction in the legislature. Multiple representatives, asked about the bill, cited its central question as a relatively intuitive one to be asking as the state deals not only with McCleary, but the threat of what could be a looming global economic slowdown.

That climate, according to Tarleton, also gives Robinson’s bill a good chance in the House, where finding sources of revenue is a higher priority for leadership than ever. Even though the bill is not forecast to bring in any money this year, it has a credible appeal as a part of a strategy of budgetary belt-tightening, she said.

“What is happening now is people are questioning … what is it that we need for our state more than anything right now,” Tarleton said. “And it’s not just about holding onto Boeing.”