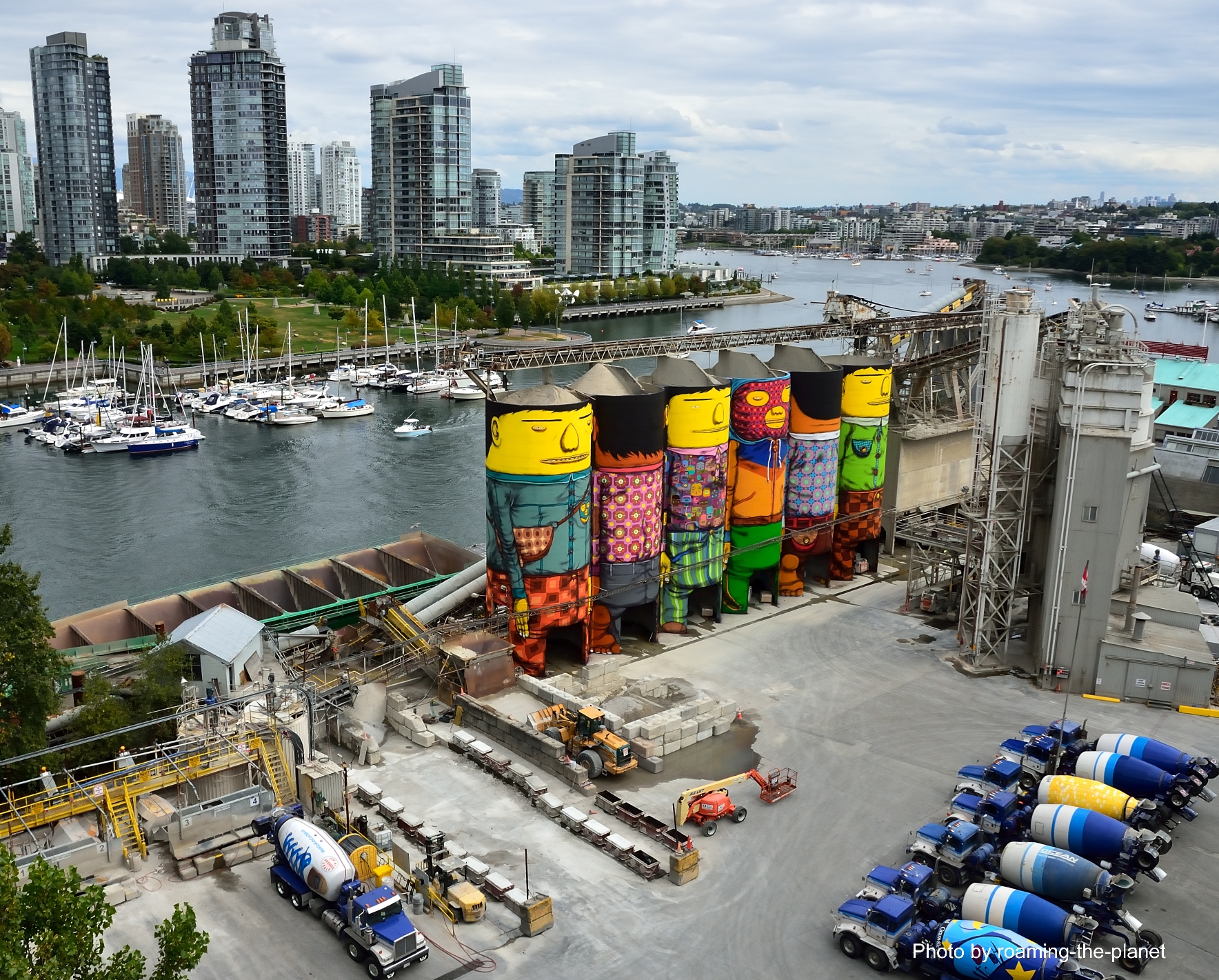 The Giants – the 24,500 square-foot, 360-degree mural created by the famous Brazilian twins OSGEMEOS for the Vancouver Biennale

It's impossible not to notice -- by sea or land -- the silos at Pier 86 at the base of Queen Anne hill. The busy grain terminal stands 130-feet tall, front and center on Seattle's waterfront.

At present, the 45-year-old industrial waterfront complex, sitting just north of Myrtle Edwards Park, is a shade of white. It has the feel of a blank canvas. And so a group of community members calling themselves Friends of Art on Pier 86 formed a steering committee in order to explore the idea of adding a little decoration.

“The silos and grain elevator structures are a prominent icon for cruise ships, tour boats, the Victoria Clipper and ferries," says Charles Bookman, a retired Seattle Department of Transportation director who’s on the committee. "For many tourists and visitors, Pier 86 is a major water entranceway. This ‘blank canvas’ could be a Seattle artistic icon.”

In 2015, Friends of Art on Pier 86 received funding from Seattle’s Department of Neighborhoods to commission a feasibility study. The results of a comprehensive nine-month inquiry by a team of consultants into art at Pier 86 will be presented this Wednesday at the Port of Seattle, which is the site's owner.

Among those presenting at the meeting will be Barrie Mowatt, the founder and president of Vancouver Biennale, the organization responsible for art on Granville Island’s concrete silos.

The idea of putting art on both functional and decommissioned silos has caught on in a number of port cities, including Quebec City, Vancouver, BC, Buffalo and San Francisco. San Francisco’s silos were decommissioned after its 1989 earthquake. Its art project was part of the beautification of the San Francisco waterfront.

Closer to home, artist Nicole Kistler is projecting a temporary light installation onto the side of a 120-foot concrete silo at Lefarge, south of Seattle, through the end of February. The installation is an image of a 300 ft. Douglas fir -- a reminder of the old growth trees that were once found all over the region.

Bookman is emphatic that the fundamental purpose of the Pier 86 silos – to get corn and soybeans onto ships -- is primary. “We don’t want to do anything to interrupt the operations,” he says. The terminal is part of the $24 billion (total annual exports) economic engine that makes the maritime industry one of Seattle’s largest employers.

The public meeting will be held from 7-9 p.m. on Wednesday, Jan. 20 at Pier 69 in the Commissioners’ Meeting Room.

After that, Bookman's group will discuss the report with various organizations throughout the city. “What we hear from them will be reported to the Department of Neighborhoods and the Port of Seattle,” he says. The study period ends in April.