An ode to the retiring Beast Mode, Marshawn Lynch 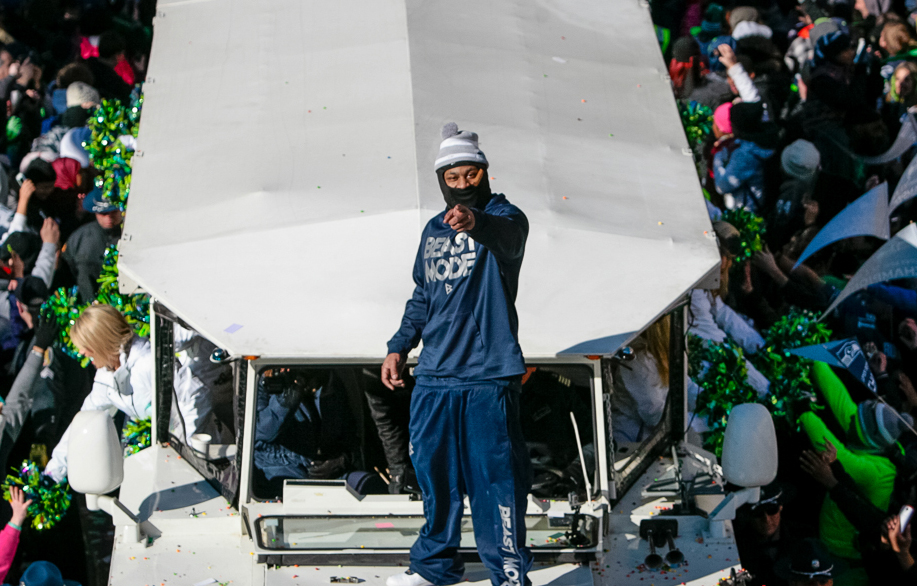 My indelible off-field image of Marshawn Lynch will always be in victory. It was during the largest gathering in our civic history, when an estimated 700,000 Seattle Seahawks fans, myself included, jammed the streets of Seattle to cheer the Super Bowl victors of 2014.

There was Lynch, sitting on the front end of a Duck—little did we know then how dangerous riding a Duck could be! He wore a Beast Mode sweatshirt and bounced like a little boy. He gleefully threw Skittles to the crowd, and we gleefully threw Skittles back. He embodied everything we love, and love to hate, about football: the playful brutality, the amalgam of manhood, boyhood and energy.

He was the spirit of a team of underdogs, yet also stood out on his own. A character we loved, even if he was an incongruous fit for mainstream Seattle. In victory, there was nothing but embrace.

Now that Lynch is reportedly hanging up his cleats, we can ponder his meaning. Seattle is still a provincial city, though we like to see ourselves world-class, upscale, tasteful. Lynch was a counterpoint: a rebel from Oakland, a guy known beyond football for his blue-collar Beacon Plumbing ads, not fancy gigs like Russell Wilson’s position as “Chief Football Officer” for Alaska Airlines.

Instead of dutifully kowtowing to the sports press, he shunned it, razzed it, embarrassed it with what can only be considered performance art — “I’m only here so I won’t get fined.”

He could use language that would normally set PC Seattle sniffing and squirming. Asked before Sunday’s Super Bowl by a reporter if he was going to be coming back next year, he answered over his shoulder, “Is your bitch comin’ back?”

Seattle has flirted with outsized football heroes and self-made marketing machines before, notably when we attempted to love Brian “The Boz” Bosworth back in the 1980s, a smirking, smack-talking linebacker who was the antithesis of former Seahawks heroes, like Steve Largent — a quiet Christian gentleman and star wide receiver. The Boz came to town and boys shaved their heads into Boz cuts and adopted his signature blue shades. He wore earrings and attitude. And he was a bust, not a beast.

Unlike Marshawn, he didn’t deliver on the field, even if he was brilliant at guerrilla marketing, like selling anti-Boz t-shirts in cities where other teams’ fans loved to hate him. He welcomed their hate, and their cash.

Lynch has been different. He has backed up his attitude with performance on the field, delivering blunt force trauma and excitement. His runs weren’t conventionally graceful, like previous star running back Shaun Alexander, but they were a force of nature: Beast Quake. They could cause the crowd to register on the Richter scale.

Marshawn ran with the football not to avoid getting tackled, but to knock over defenders. He delivered blows and beat down the opposition. Games with Marshawn developed a kind of energy that Seahawks fans had not experienced before. The team may be owned by billionaires and play in a venue with a corporate name (CenturyLink), but with Marshawn running up the middle, the Seahawks embodied what economist John Maynard Keynes called animal spirits, the “spontaneous urge to action rather than inaction.”

A tangible sense of life force filled the stadium. The 12th Man had a communal experience out of place for a city known more for its Scando-Asian reserve. Forget passive, enjoy aggressive.

Yet for all his individuality, Lynch always was smart, at football and in business. He played with enormous heart. His teammates love him and marvel at his generosity. His classiest moment came following the despair-inducing defeat of the Seahawks by New England in the 2015 Super Bowl—when the Hawks were intercepted on a play that everyone in all of football-dom thought should been a hand-off to Marshawn to score and seal the win on a goal-line drive.

It was Lynch who helped to defuse the angry second-guessing of his coaches and fellow-players: “It’s a team game,” he said. Lynch is one of a kind, but he knows you win and lose together and refused to throw anyone under the bus.

That loss battered the team’s psyche, and it took most of this last season for them to process it, recover, and begin to get back to where they should be. Due to injuries, they had to do much of it without Lynch, and so Seattle got a peek at life after Beast Mode. For the team, there is hope for the new players coming along, but those Marshawn-less games served to underscore just what we’ll be missing. With Lynch’s retirement, we must also give up hope of a final redeeming play: handing the ball to Lynch to win the next Super Bowl.

The fact is, football and football players are more ephemeral than we would like to believe, especially when it comes to our heroes. We can re-live Beast Quake on YouTube, we can buy merchandize at the Beast Mode shop. But for those who are lucky enough to have been Seahawks fans in the Marshawn Lynch era, we’ll never forget the the excitement that came with a shower of Skittles.