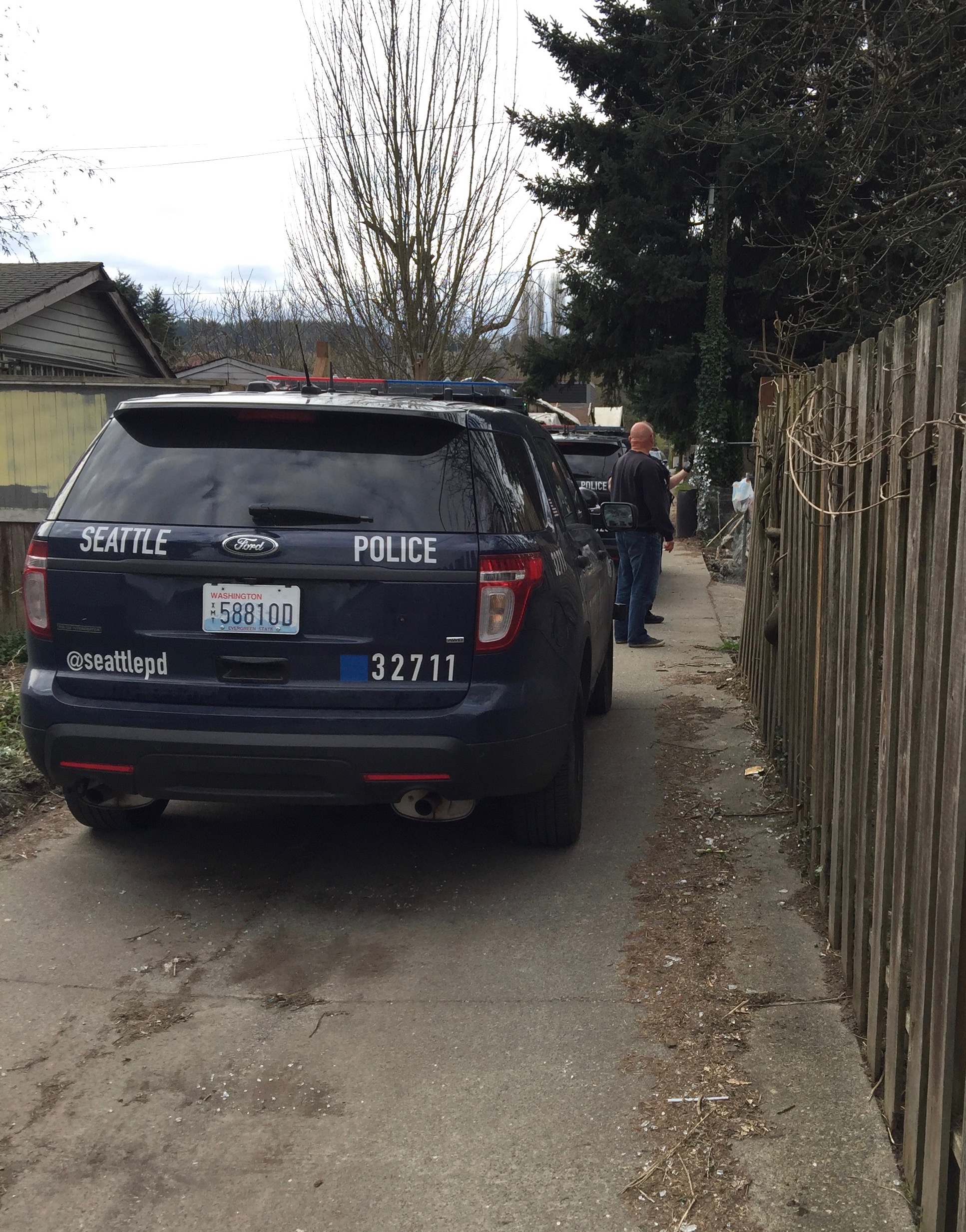 Jeff Hayes talks in a South Park alley to a police officer after several cars responded to a 911 call placed by another resident.

The man who attacked a store clerk and a customer with a hatchet last week lived in Seattle’s South Park neighborhood. Jeff Hayes knew the attacker as a next door neighbor.

Hayes, a retired Seattle firefighter, has become a citizen activist because of his concerns about the shady activities at the man’s house. He and his neighbors have called the police with complaints about problems related to drugs, prostitution, and trafficking in stolen goods, only to be told that the cops couldn’t do much until something really bad happened.

“Well, it unfortunately happened,” Hayes wrote in an email to Crosscut.

Authorities say that Steven Blacktongue, the man in question, entered a Burien area convenience store about 5:45 on the morning of March 13 wearing a mask and carrying a hatchet. Blacktongue reportedly swung the hatchet at a customer who was drinking coffee and then attacked the store clerk. The customer, who had a concealed weapon permit, shot Blacktongue, who was pronounced dead at the scene. In the wake of such a gruesome incident, and after years of trying to find some way to resolve the issues next door, Hayes is understandably upset. He believes that if he lived in one of Seattle’s more affluent neighborhoods, someone would have intervened before Blacktongue died and the two other people in the store suffered trauma that will stay with them the rest of their lives.

He’s hardly alone in wondering how much attention is being paid. Concerns about the quality of city services in South Seattle as a whole, including South Park, have been ongoing for a long time. Questions about a weakening of police effectiveness or even effort — so-called “de-policing” — have popped up repeatedly in the past few years.

I’m not sure about all that: Authorities did respond in quite a few ways, certainly in part because of Hayes’ dogged work. And it’s sometimes hard to guess what triggers or heads off a tragedy.

Officials reached in recent days questioned both ideas. Deputy City Attorney John Schochet noted that City Attorney Pete Holmes lives in the South End. And, he said, the office had a criminal case pending against Blacktongue at the time of his death, involving domestic violence assault. According to the White Center Now/West Seattle Blog, Blacktongue had a March 28 court date on an assault charge involving an 18-year-old male relative. While a Seattle police spokesperson was unable to comment by press time, it appears that the department had responded two dozen times or more to the address next door to Hayes over the past two years.

Hayes certainly did everything that anyone could ask of a citizen acting on behalf of his or her neighborhood. I first learned of his efforts last year when he wrote an op-ed for Crosscut suggesting that the lack of action on the part of police stemmed from a lack of aggressiveness in the wake of a consent decree on reforming the use of force and the treatment of diverse communities. At the time, he was somewhat back and forth between hopefulness and frustration about the response of police and other city officials.

City Councilmember Lisa Herbold, who represents the neighborhood, said she knows that city police have tried to be responsive, that a mobile precinct vehicle is occasionally set up nearby, and that bike patrols are used in South Park. "Whether or not it has been enough, I think, is a good issue," she said.

On Saturday afternoon, I went out to visit Hayes, to meet him in person and see the neighborhood myself. Hayes lives in a pleasant, two-story house, but next door, people come and go, many of whom he and his family have never seen. He told about being threatened by people apparently associated with the house that was just right there — close enough that I didn’t want to stare. As he said, the associates were people who hung out with someone capable of putting on a mask and taking a hatchet to attack others.

We walked around the block to get an idea of some of Hayes concerns — which include the state of the property and a plastic covered RV parked in back (records show city inspectors have been working on that issue). As we walked down the alley behind his house and the neighbors', someone — apparently one of a group of young people ­— was smashing something, probably wooden, from the sound. We walked around the block and encountered other neighbors, who said they called 911 after someone smashed a pick axe into their wooden fence.

Hayes wondered aloud how long it would take to get a police response. A minute later, when we walked another half-block or so, we came to an alley and spotted three patrol cars, which had apparently came without using sirens.

He does know people in the city are trying to do their jobs. "I see you going through the motions," he said of the city government, "but it's not having the desired effect."

He pointed to a police website saying that Community Police Teams, unlike regular patrol officers, "are here to focus on the long-term, and often chronic problems specific to individual neighborhoods. … Residents and business owners get to know and trust the officers, making it easier to work together to resolve and prevent problems. CPT is about understanding ongoing issues that go back weeks and months and taking steps to prevent problems before they arise."

Hayes said the years of struggling with problems next door have made him harder. When we got back from walking around the block, he said he gets angry about the behavior of teens who could put a pick axe in a neighbor's fence and run off. But he also understands the challenges they may face and how a tough home environment could shape a young person, reflecting on how he might have reacted growing up in difficult circumstances. "That's what tears me up," he said.

Sometimes whole systems — police, the courts, mental health, drug treatment, child protection — come together and turn lives around. Sometimes they don't. The recent book by Stranger writer Eli Sanders, While the City Slept: A Love Lost to Violence and a Young Man's Descent into Madness, has provoked a lot of discussion about systems failures and how difficult it can be to get intervention before something awful happens. A disproportionate share of the failures seems to happen in poorer neighborhoods.

Hayes still hopes that things will improve in his neighborhood. He pointed to the presence of large numbers of young people next door at all sorts of hours. He thinks there's time for effective responses to make a difference in their lives, although he wonders, from talking with police, whether the city and other public agencies are willing to be forceful enough in intervening in young people's lives.

As we talked, he came back to the question of whether South Park, with the income and ethnic diversity the city says it wants to nurture and protect, is really a priority for public officials.