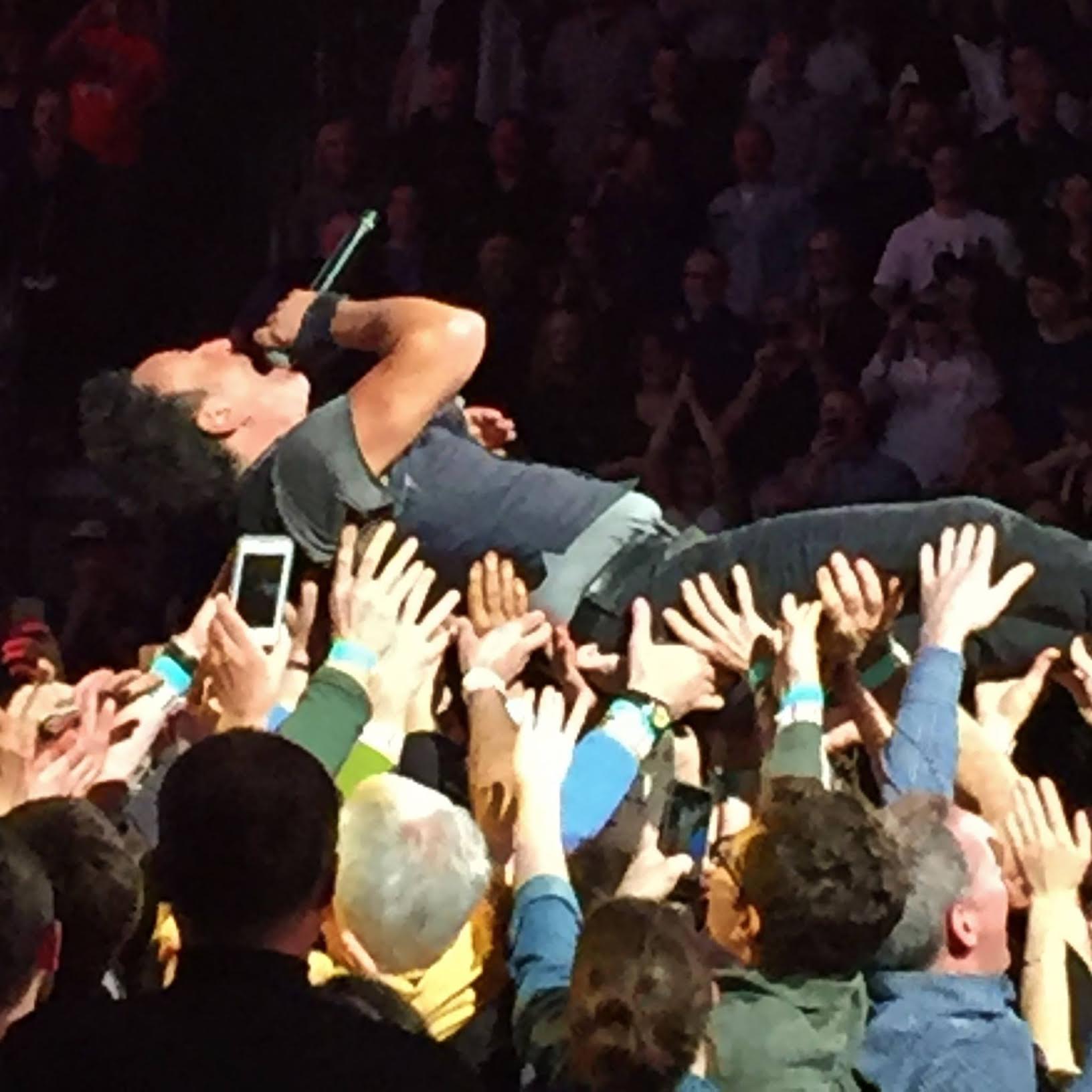 “The River was my coming of age record,” Bruce Springsteen told the crowd at Seattle’s Key Arena, just before the 66-year-old man joyfully crowd-surfed, shimmied and rocked for nearly four hours without a break. He told us he had wanted to write about adult themes in the record, and the ties that bind people to their lives.

In the hours that followed, for the first time, I listened to the tracks on The River with adult perspective, and realized how much they connect with our times. It was 1980 when the record came out. The American dream felt like a fragile thing then, much as it does now. There were race riots in Florida over the acquittal of four white police officers who had killed a black man, and the U.S. boycotted the summer Olympics in Moscow. Rising unemployment, rising inflation, and the high price of oil cast a pall over the U.S. economy. The term “energy crisis” had become part of the national vocabulary.

The River was lauded for what would become Springsteen’s signature themes: independence, hope, and despair. Springsteen himself called it the gateway to his future writing. I think the fact that, 35 years later, he would choose to devote a concert tour to performing that album in its entirety is about more than just commemorating an anniversary. These days feel portentous. The themes of despair and resignation present in its songs resonate just as much now as they did in the era of big hair and shoulder pads.

I grew up on the Jersey Shore with an older brother who hung out with Bruce and company at The Stone Pony, that seminal Asbury Park club, where the E Street Band came together. In the time-honored tradition of older siblings ushering younger ones into good music, my brother turned me onto Springsteen before he became a commercial success. Songs about free-spirited cavorting on the boardwalk were the soundtrack of my youth, but so were the darker tales of generational divide. To this day, I can’t listen to “Independence Day” without painful memories of door-slamming family discord and misunderstanding.

Listening to the impassioned debates at my neighborhood’s Democratic presidential caucus this past weekend, one line from the song stood out: “I ain’t gonna let them do to me what I watched them do to you.”

One month after The River was released, I – a newly politically aware college student – had just voted in my first presidential election. When things didn’t turn out the way I’d hoped and Reagan was elected, many of my peers and I contemplated moving to Canada.  There were – in the words of Harry Potter’s Dumbledore – dark times ahead.

These are dark times now as well. My husband and I have weathered unexpected job loss, and watched in horror as a number of our 50-something friends were laid off. We’ve worried whether we would be able to afford to send our high school-aged daughters to the colleges of their choice. Amidst rampant development in our booming metropolis, we’ve felt squeezed out of our neighborhood, but can’t afford to move anywhere else in the city.

Bernie Sanders and Hillary Clinton were both just in town, in the lead-up to the caucuses. My brother and I, now the oldest living generation in our family, occupy different spaces on the political spectrum, and this has led to strained relations. My 17-year-old daughter has her own views about where the country should be heading and who should lead us there.  She’s pure in her convictions, just like I was at 17.

When Springsteen introduced “Independence Day” at Key Arena, instead of speaking from the point-of-view of the teenaged motorcycle rider who didn't see eye-to-eye with his hardass father, the Boss told us the song was about recognizing the compromises your parents and eventually you have to make.

“You choose the people you walk alongside in your adult life as you head to your mortality,” he said.

When I got home at around 1 a.m., I noticed a light on in my daughter’s room. The next morning, as she got ready for school, she admitted staying up to listen to a new album by her favorite artist, which had dropped the night before. We’d had an independence-related tiff the day before. But now, like dueling banjos, we gushed about these performers, their music and what it meant to us, both aglow with an energy that I knew would last all day and beyond.

Though I’ve seen him in concert several times before, I was skeptical that Bruce Springsteen could take a 35-year-old album and make it fresh.  As the Greek philosopher Heraticlus once said, you can't step in the same river twice.

What I didn’t bargain for, but what Bruce so shrewdly recognized, is that to participate in a collective revisiting of the music of our youth with the eyes of an adult, is cathartic. Every time you step into the river, it’s new, because the water continues to flow like our perspectives, shaped by our ever-evolving personal experience with the American Dream.

Alison Krupnick, longtime Crosscut contributor, is the author of "Ruminations from the Minivan" and the blog "Slice of Mid-Life."