Inslee tries to break Legislature of a bad habit 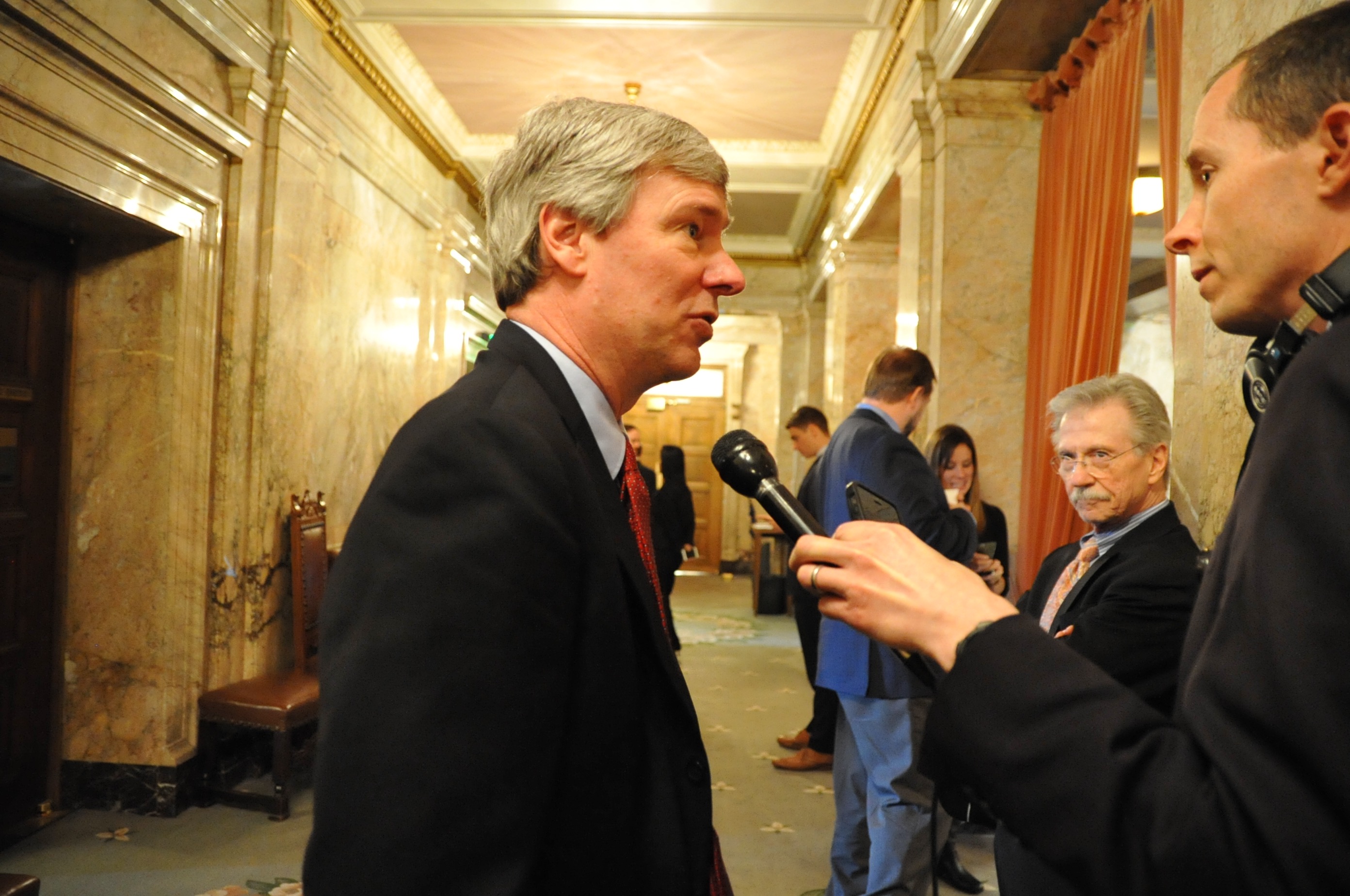 House Majority Leader Pat Sullivan, left, is interviewed for a radio report by Austin Jenkins of the Northwest News Network.

On the last day of the Legislature's regular session — the time allotted for lawmakers to do their job in Olympia — the mood in the halls of power was relaxed, even as a major job remained unfinished and the governor threatened a mass veto of bills.

On the floor of the House, one representative idly munched a brownie, while others brought staff and friends onto the floor for pictures — territory normally strictly reserved for lawmakers on the job. In the wings, lawmakers cracked jokes and lounged on the leather couches lining the walls. And during an hour-long break for lunch, House Democrats projected a Pac-12 men's basketball tournament game on the wall of their caucus room — the University of Washington was playing the University of Oregon.

But behind the scenes, a familiar drama of division was playing out in Olympia, and here and there, hints of the tension slipped into view as the clock ticked toward the expiration of the session. The House majority leader, Democratic Rep. Pat Sullivan of Covington, gave a tight-lipped interview to a radio reporter. A legislator mentioned that she was using the word "omnishambles" to describe the fate of one of her bills — an invented-in-2013 neologism that she employed for a less-polite word involving the word "cluster." And when a press release went out from the Governor's Office with the word "veto" in it and a list of 37 bills, more than one conversation in the legislative halls turned to the subject — even as cheers and shouts continued to ring out from the caucus room over the basketball game.

Late Thursday night, Gov. Jay Inslee ordered the Legislature back into special session, starting it immediately without even a break for the weekend. The governor also vetoed more than two dozen bills, largely carrying through on a threat issued early in the week. His action, he acknowledged, could be the largest set of vetoes in state history, but he said none of the measures was as important as passing a supplemental budget, a fairly modest update to the two-year spending plan adopted last year.

If lawmakers seemed only somewhat on edge about the prospect of having to try again on a budget, they have been through special sessions before. This is the sixth time in the past seven years that a governor has called a special session after legislators failed to finish their work during the constitutionally established time frame. But from 2002 through 2009, getting done on time was more the rule than the exception, with legislators needing to go into immediate overtime in only one year. That was a period when legislators seemed to take particular pride in finishing on time, in contrast to some two decades of regular we-need-more-time excuses from their predecessors.

Explaining his vetoes, the governor referred to the recent years of legislative failures to finish on time. "I respect the Legislature's work, and it is not something I take any pleasure in," Inslee said of vetoing the bills. But, he added, "you don't like to see habits become perpetuated."

Inslee said he wasn't setting any criteria for what had to be in the budget, just requiring that legislators send him one. That goal should be a reasonable one for legislators to reach by Monday, he added. All special sessions are automatically up to 30 days long, but the Legislature would be able to adjourn — ending the special session — as soon as lawmakers felt their work was finished.

Within the budget, three major sticking points have emerged: whether to tap the state's rainy day fund, whether to set funding and tax levels that balance over four years instead of just two, and whether to merge a set of pension accounts.

Of those, the question of the rainy day funds is among the most contentious. Republicans want to use the fund, which is projected to soon reach nearly a billion dollars, to cover the costs of last year's catastrophic wildfires in the state. But Republican leadership has strongly resisted a Democratic proposal to temporarily increase funding for anti-homelessness initiatives. After Senate Democrats proposed dedicating $300 million from the fund for homeless measures, Senate Republicans responded with a budget that included only $10 million of funding for homelessness, with none of it coming from the fund.

According to a source involved in the negotiations, who spoke on the condition of anonymity, the question of the pension funds amounted to political horse-trading. Democrats have pushed a package of bills that raise revenue by adding restrictions to some tax exemptions. Republican have proposed to merge police and teacher pension accounts, using surpluses in police and firefighter pensions to make up for deficits in teacher pensions. Killing the merger, the source said, is being discussed by Republicans as a bargaining chip to get Democrats to drop some or all of their tax break proposal.

Jason Mercier, director of the center for government reform at the Washington Policy Center, a free market think tank, called the pension merger a relatively straightforward budget maneuver with solid analysis behind it, but said that introducing it so late in the session, without a chance for much public input, had basically guaranteed a conflict.

Included in the 27 bills Inslee vetoed were measures concerning fire sprinklers, disabled students, marijuana and hemp development, health-care costs, car dealers, and invasive species. Inslee said the 10 bills he had chosen not to veto involved public safety, public health and law enforcement, because those are higher priorities that shouldn't be put at risk in any case.

Asked by reporters why he hadn't employed such hardline tactics last year — the most recent full-budget session, when legislators could have done more about addressing the state Supreme Court’s McCleary ruling on better funding of schools — Inslee only repeated his earlier statement about breaking a habit of the Legislature.

Asked whether he would consider using the same tool next year, when the Legislature is scheduled to take up the McCleary issue and ostensibly arrive at a fix, Inslee said only that it shouldn't be necessary.

Calling the vetoed measures "worthy bills," Inslee said when legislators finally send him a budget this year, he'd be open to signing the vetoed bills if they put them before him again.