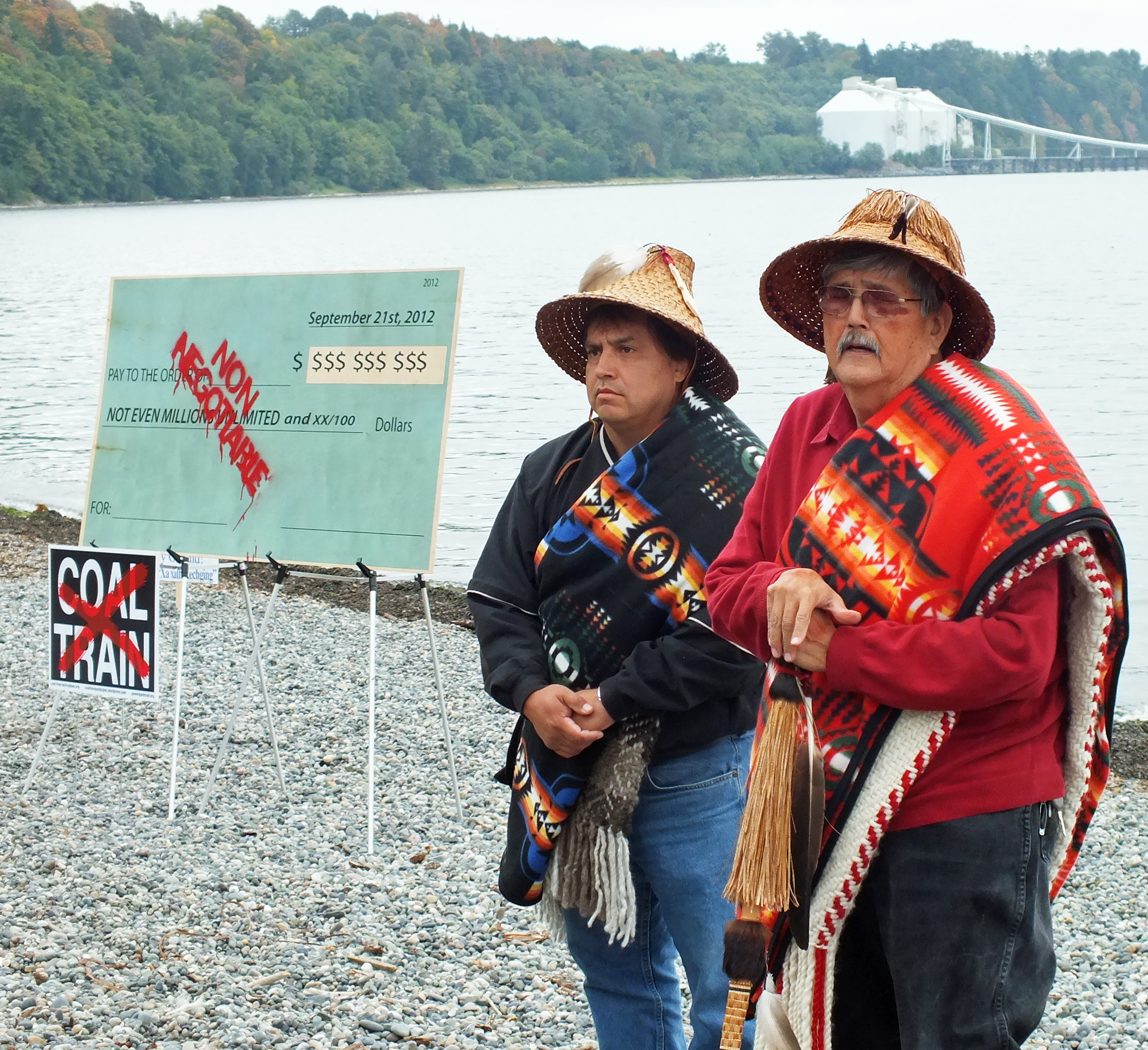 Lummi elders burn a dummy million-dollar check on the Cherry Point beach to make the point they will not be bought off (September 2012).

Environmental reviews of a coal-export terminal that would be the largest in the nation were summarily suspended on April 1 — but it was no April Fool’s trick for the developers of Gateway Pacific Terminal or local, state and federal agencies working on the protracted review.

A small army of scientists, researchers, bureaucrats, politicians, environmentalists and business executives are sitting on their plans, waiting for the U.S. Army Corps of Engineers to define a tiny Latin term: de minimus. It is tied to questions over whether the project would harm Lummi Nation fishing.

Indeed, pushed by an impatient Lummi Nation to enforce 19th Century treaty rights that guarantee fishing in “usual and accustomed places,” the Corps is boxed in. On one side are sophisticated and well-funded tribal leaders, who know Indian law to the last phrase; on the other, angry but powerful coal-country Republican congressmen, who fear their chances to export coal to massive Asian markets will be shut off.

Corps officials promise a decision on Lummi claims by April 30. The uncertainty over the ruling caused SSA Marine of Seattle, developer of the giant Gateway Pacific Terminal, proposed for Cherry Point north of Bellingham, to put the environmental review of the $665 million project on a 45-day timeout. The action is virtually unprecedented for a project of this magnitude, officials say.

But the stakes are huge for SSA Marine and its partners in the terminal.

The company has been working for more than two decades to build some sort of export terminal on its vacant land at Cherry Point, near the Lummi reservation. A Corps decision for the Lummis could put in jeopardy not only Gateway Pacific but any proposals at the site that require large numbers of the massive bulk carriers that haul coal, oil or other commodities.

There could well be implications from the Corps’ decision for any other new terminals in the area. That could include a giant methanol plant that has been proposed at both Tacoma and Kalama; in the case of Tacoma, citizen pushback has caused suspension of the proposal’s environmental review. The Kalama project is undergoing environmental review.

The Tacoma News Tribune on Saturday revealed that Gov. Jay Inslee’s office engaged in talks with Northwest Innovation Works, a company with backing in China, as early as 2013. In those early discussions, Cherry Point was listed as one potential location and Longview as another, in addition to Tacoma and Kalama. A Department of Commerce spokeswoman said Monday the agency is not working on any Cherry Point prospects, nor is it working currently with Northwest Innovation.

Methanol would be converted from natural gas piped to the site, and shipped to Asia on ships about the size of oil tankers presently using the Salish Sea. The large ships would revive the Lummi concerns, but the volume of traffic would be less than Gateway Pacific, coming to only some 100-plus vessels a year, according to documents.

A Cherry Point methanol plant would appear to require a new environmental process; the current one for Gateway Pacific looks like it could run for five years. It would not involve rail shipments, one of the major concerns of the Gateway Pacific project. But the ships would encounter Lummi treaty rights and the “de minimus” test.

At the heart of the Corps’ decision on the coal port, the term “de minimus” is defined in one legal dictionary as Latin for "of minimum importance" or "trifling." In a series of decisions springing from the iconic Boldt Decision of 1974, courts have generally accepted that treaty rights to harvest fish are protected if damage to the fishery habitat by a project would have any significance more than minimal, or “de minimus.”

Lummi Nation leaders note that the big coal-export terminal would add nearly 500 of the world’s largest ships into the Salish Sea every year. That, they say, would cause more than “de minimus” damage to their fishing industry by harming habitat and endangering fishers, boats and gear. The are already major industries at Cherry Point, two refineries and an aluminum plant, but they were developed prior to the Boldt decisions.

Although the public face of opposition to Gateway Pacific has often been the surging crowds of opponents at hearings across the state, underlying the entire process has been the knowledge that treaties signed by native leaders in 1855 may ultimately provide the best hand at the table.

Tribal leaders of the 19th century, many working in a language and a legal environment they did not understand, were pressured to sign the treaties, giving up most of their rights and sending their members to reservations. But they maintained their historic right to take fish “at all usual and accustomed fishing grounds.” It took more than a century for that guarantee to have the support of federal courts, with important rulings by federal Judge George Boldt in 1974 and 1980.

Boldt ruled that tribes had treaty rights to capture half of the commercial salmon catch, and also to be protected against projects or actions that endangered their traditional fishery. The latter provision comes into play with Gateway Pacific. The Corps of Engineers is the federal agency that must rule on the Lummi request, not for the first time. Among the several pro-tribe rulings following Boldt was one in 1996 denying a proposed fish farm in Rosario Strait, part of the Lummi traditional fishing grounds. In 2013, federal courts added another case to the growing pile of post-Boldt opinions, ruling that fish passage could not be obstructed by culverts and other structures. The case is still under appeal, however. (A good review of Boldt decisions by the Marren law firm is here.)

The various products of Boldt provided potential ammunition for Lummi opposition to Gateway Pacific. Some tribal anger had already been spurred by SSA workers 2011 excavation of a site containing Lummi artifacts without notifying the tribe or other officials. And in 2012, the tribe completed an extensive study of the implications of the giant terminal. Ironically, the $400,000 study was financed with an SSA Marine grant.

On July 31, 2012, a Corps of Engineers official recognized the growing Lummi concern, but said the Corps needed a formal request to intervene.

Two days later, Lummi Business Council Chair Tim Ballew II sent a formal letter to Col. Bruce Estok, the Corps district engineer in Seattle, stating that the tribe’s studies had "resulted in a clear and convincing conclusion that the proposed projects, if built and operated, would have a substantial impairment on the Lummi treaty fishing right harvest at XweChiexen (Cherry Point)." In September, tribal leaders burned an effigy of a million-dollar check on the beach at Cherry Point, an emphatic statement that their treaty rights were not for sale. The controversy became a national news story.

The event bolstered the hopes of anti-terminal forces even as state, local and federal agencies embarked in October 2012 on a lengthy public process to define the parameters of an environmental impact statement (EIS). Four months of hearings, drawing nearly 9,000 people, were followed by a six-month period to analyze comments and the launching of the EIS process. Assuming the Cherry Point goes forward, a draft EIS may be released at year’s end. It accepted public concerns about climate change and regional train traffic, an unprecedented broadening of an environmental review.

Lummi master carver and treaty-rights defender Jewell James took a new totem pole on a long trip from the Powder River Basin to the Lummi reservation in the fall of 2013, solidifying other tribes behind the Lummi bid to stop the coal terminal. In the region, only the Crow Nation with its large coal reserves, is a major Indian holdout to the Lummi position. The Crow are associated with Cloud Peak Energy mines in Montana, and their support has received ample attention from supporters of Gateway Pacific.

A final event pushed the Lummis even harder to demand the Corps decision that is now imminent. At the end of 2014, an independent study of vessel traffic in the Salish Sea found there would be a substantial impact on Lummi fishing rights from nearly 500 vessel calls per year, or a thousand trips to and from Gateway. Lummi opposition deepened, as did environmentalists’ pressure.

A January 15, 2015 letter from Lummi Chair Ballew to District Engineer Estok again notified the Corps of Lummi opposition. And last July, the Lummis insisted it was “imperative that the Corps carry out its trust responsibilities as they relate to the Lummi Nation and the treaty rights to fish, gather and hunt in the usual and accustomed place.”

As environmental and Lummi pressure continued to build, SSA Marine and terminal backers in Montana and Wyoming attempted to delay the Corps’ ruling by insisting that the Corps needs to wait for the draft Environmental Impact Statement to be completed at year’s end. Their hope is that it would contain information that might damage the Lummi claims of anything more than the most minimal damage to their fishing and their rights. But the environmental review and treaty rights are two entirely separate legal instruments; modern environmental laws don’t preclude invoking the 19th century tribal treaties.

Nine months after that second demand letter from Ballew, the Corps finally appears ready to make a decision.

SSA Marine, in turn, on April 1 suspended its payments to conduct the massive environmental review. The firm has already spent $11.1 million for the studies, plus the $400,000 for the Lummi’s research. In addition, the developers have spent millions on their own research, responding to reviewer requests, and mounting major public-relations and lobbying programs.

Regardless of which way it rules later this month, the Corps is likely to face protracted legal challenges. The issues would take much longer to resolve than the 45-day suspension period that SSA Marine invoked on April 1. More heavy decisions could face the terminal developer, as the international coal market plummets and anticipated coal shippers fight to avoid bankruptcy.

A project that was announced in 2010 at the height of the Asian coal boom, with no stated opposition from the Lummi Nation and a sophisticated public-relations push in Whatcom County, has now come to a critical point in its long and costly journey. For the supporters and the opponents, the results of the Corps decision on a tiny legal phrase will likely carry heavy significance.